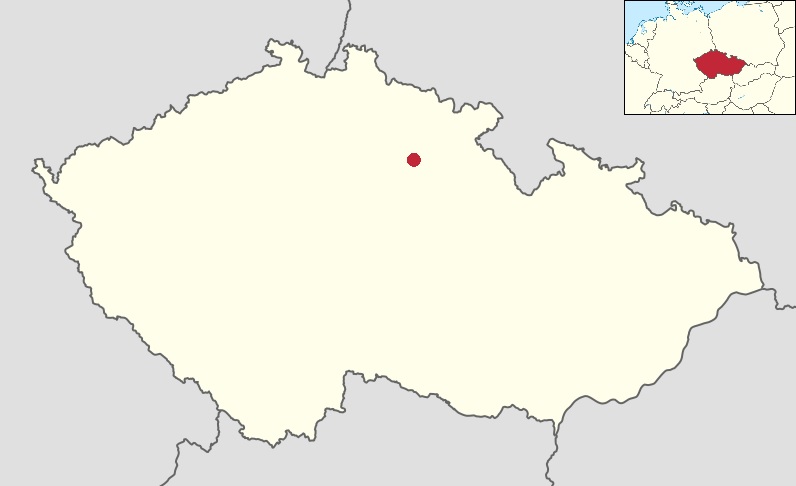 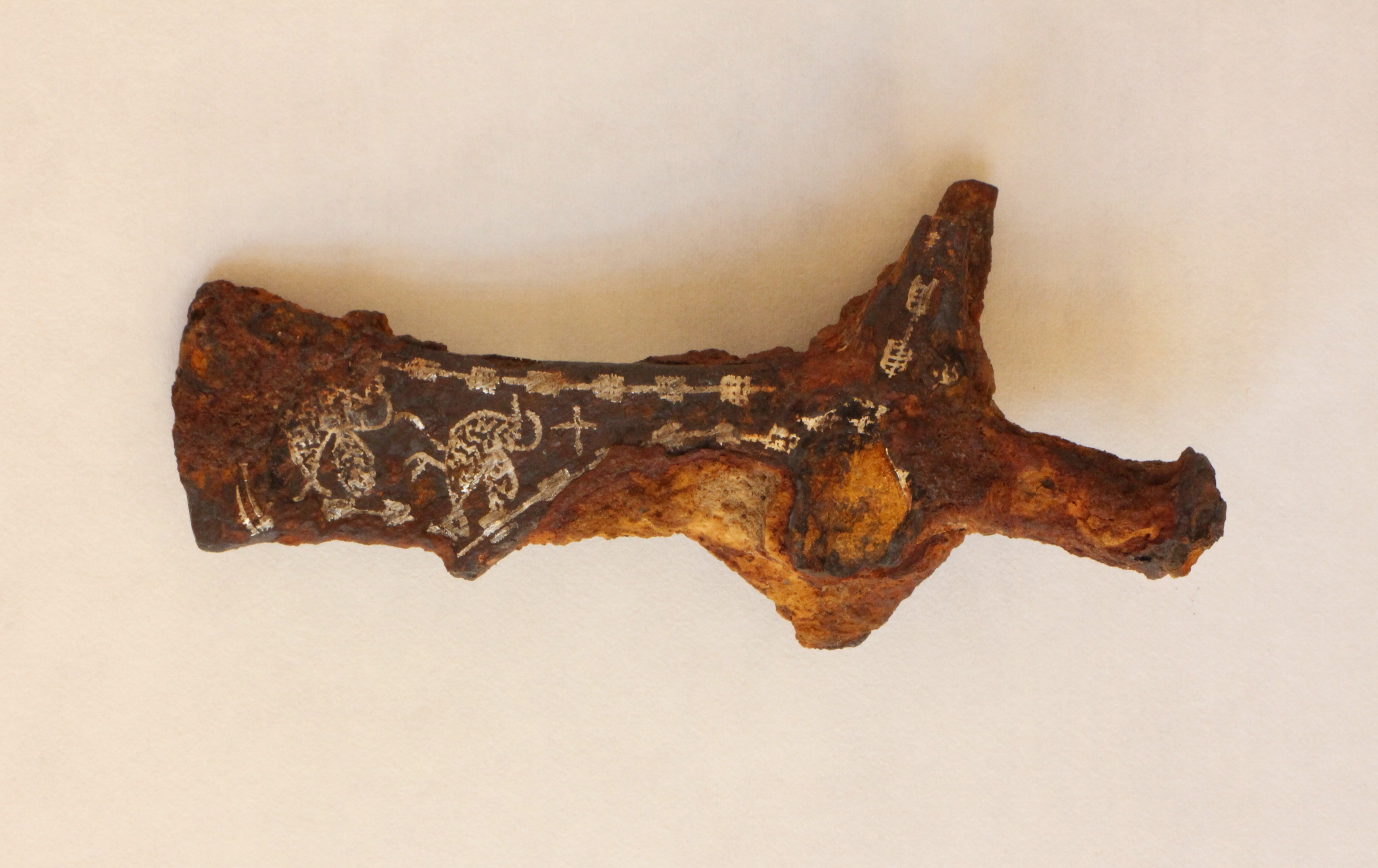 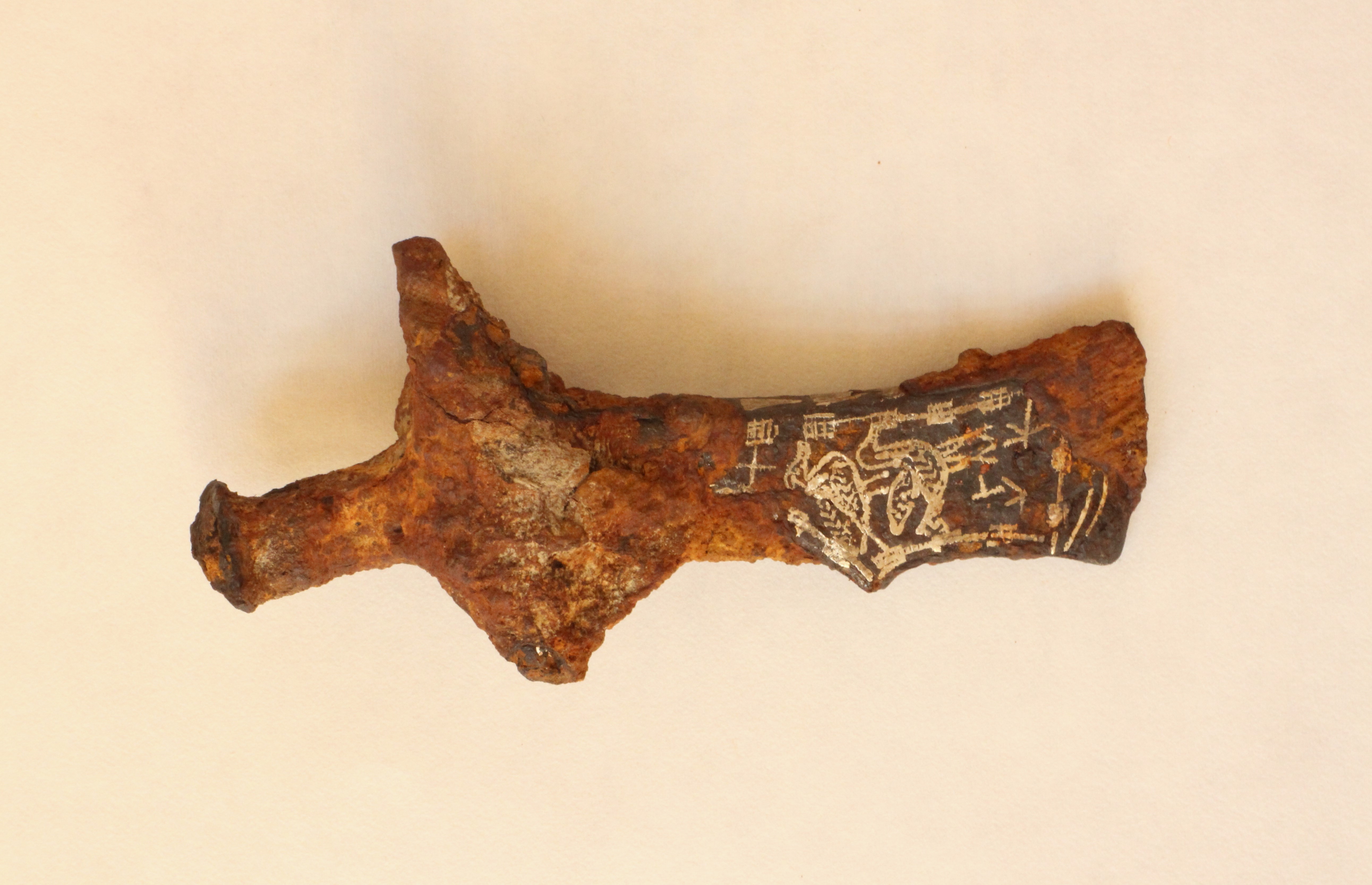 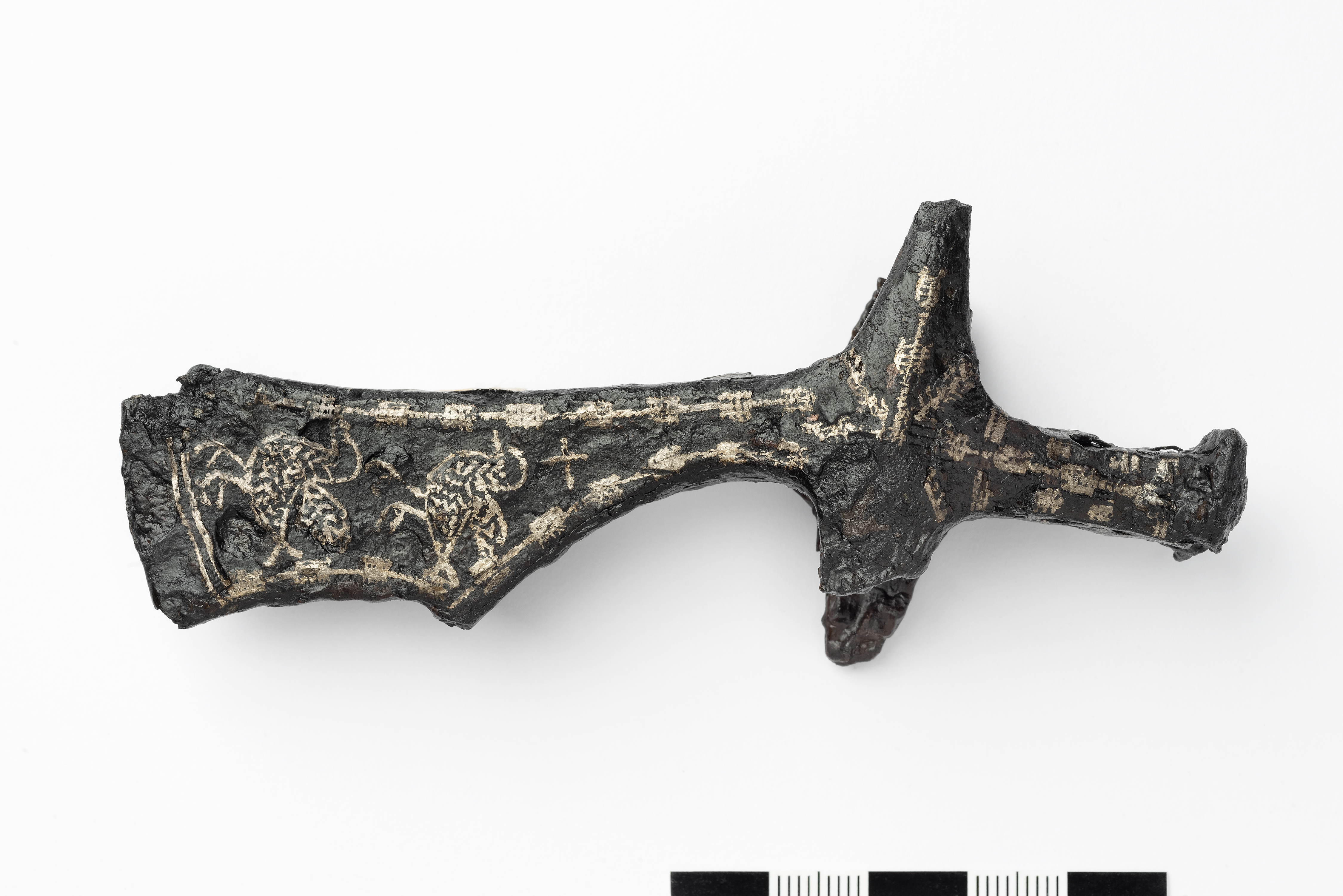 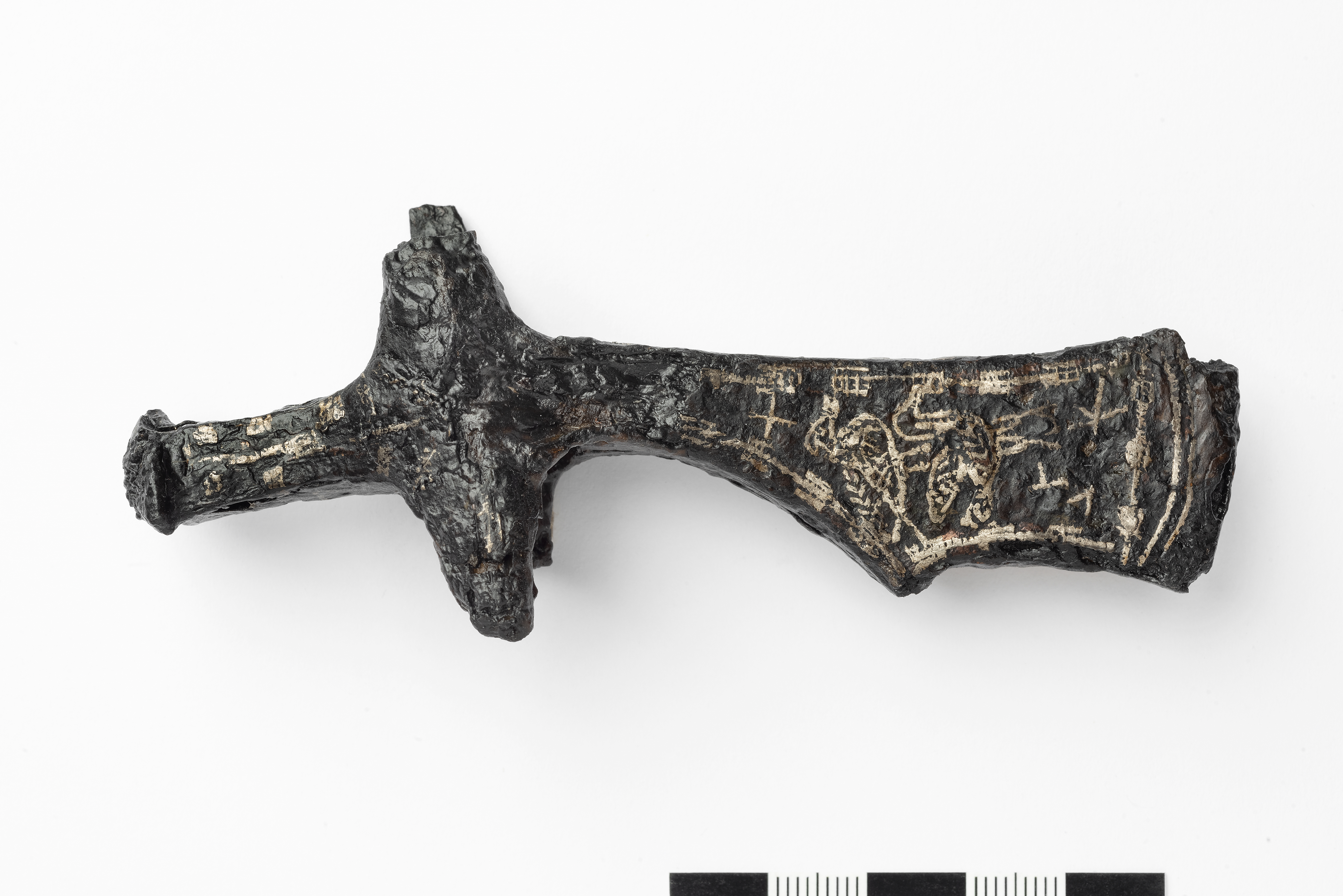 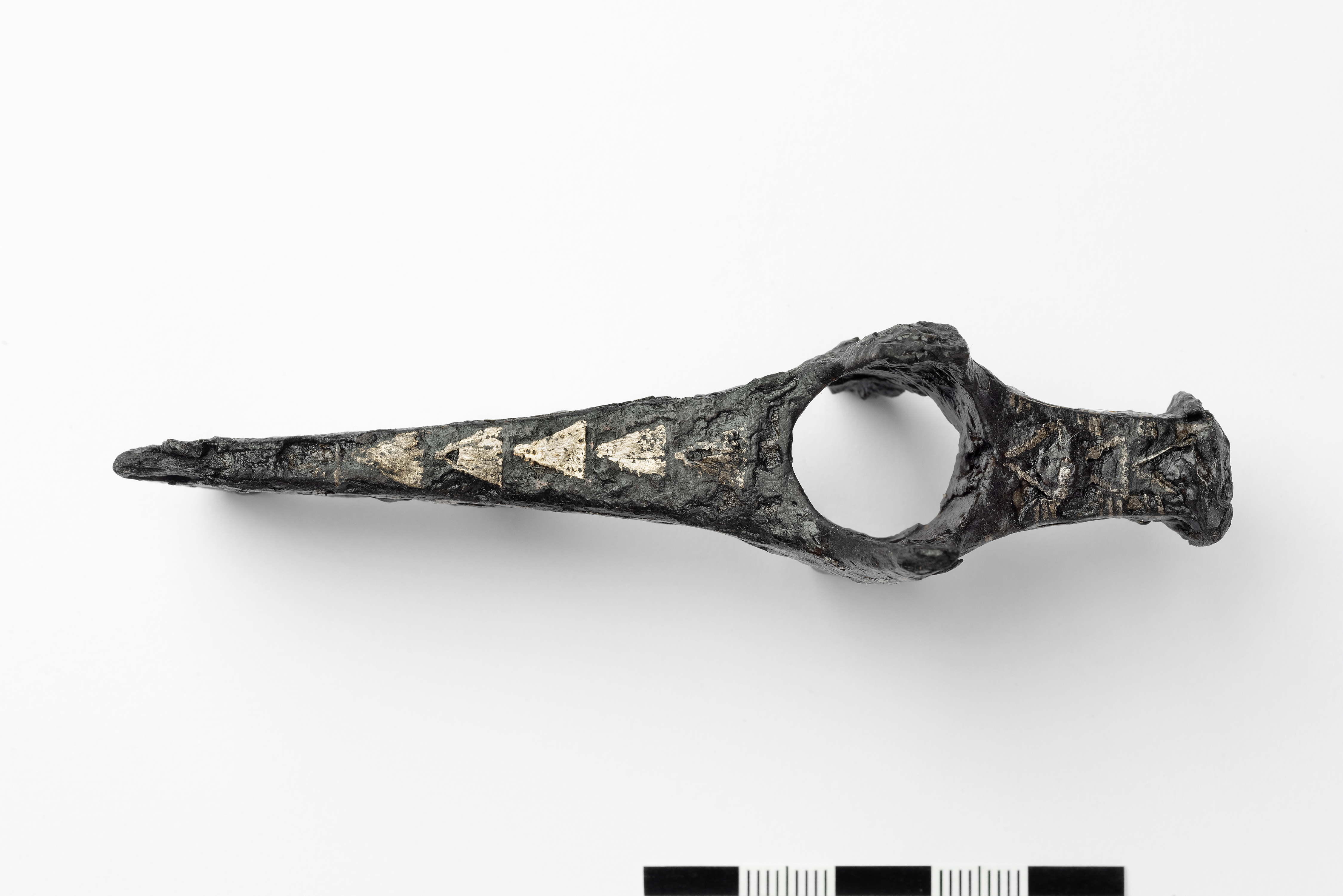 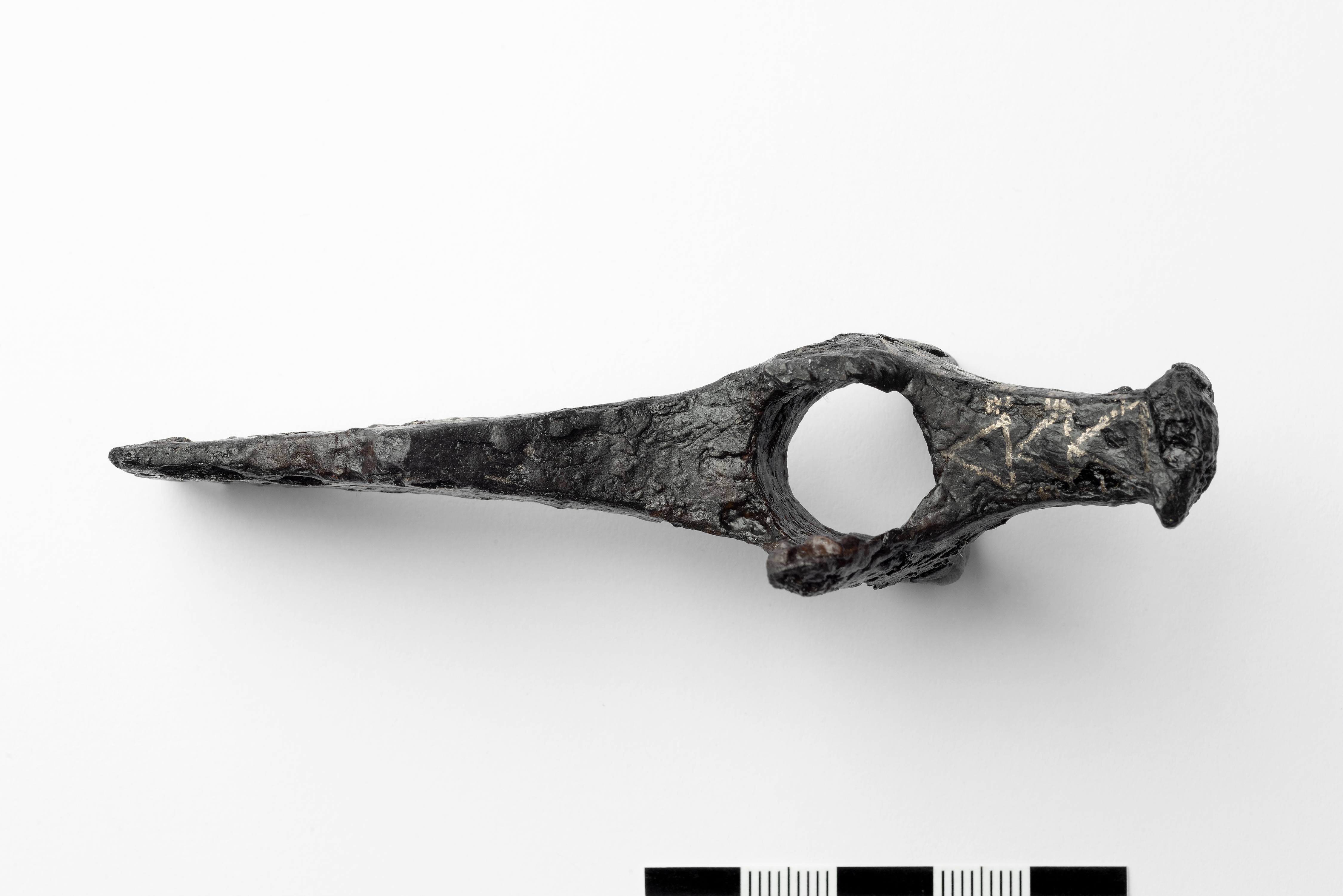 What makes the axe special is decoration made with inlayed silver wire. The logic of inlay is that grooves are prepared on the surface of the object and filled with contrasting material in a certain motif. Unlike overlay, the grooves correspond to the motif. Both sides of the blade of the our axe are lined with simple lines, which are doubled on the edge side. The lines are crossed at regular intervals by clusters of perpendicular lines (5-7 pieces). A pair of birds with crosses is shown in the space delimited by the lines. Motifs are not symmetrical; on one side, the birds are complemented by additional lines of crossed clusters of lines. The thorns are decorated with vertical lines, which are crossed both by clusters of lines and a large cross with a tree pattern. The sides of the hammer are decorated with central lines with clusters of lines surrounding them. The top and bottom are decorated with triangles, which are either filled with silver (on the side of the blade) or left empty (on the side of the hammer). Patrick Bárta, who inspected the axe during 2021, also revealed a very small decoration with copper alloy wire (Bárta 2021). The following picture represents suggested reconstruction made by Patrick Bárta. 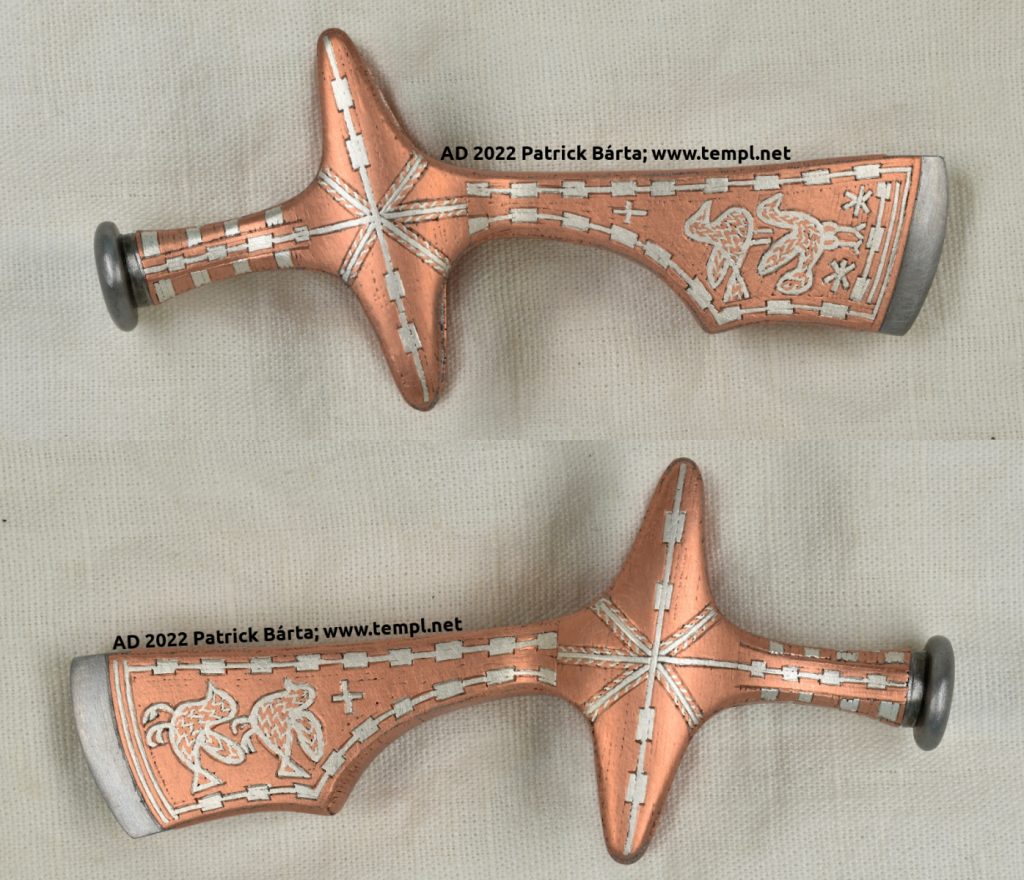 The fact that the axe is inlaid with other metal is considered to be an unique unparalleled feature by the staff of the Hradec Králové Museum. It is true that beared axes of type IB.5.30 (with associated types IB.5.34 and IB.5.28) are rarely decorated, but at least one analogy exists. It is the axe from Bardy, Poland, which belongs to type IB.5.30 and which is inlayed with copper alloy wire on the thorns, neck and hammer (Kotowicz 2014: Tabl. II.1; Kotowicz 2018: 34-35). Even this axe is considered unique in Poland, and because of the absence of analogy, there has been speculation about Scandinavian influence, which we believe does not need to be discussed any longer (Kotowicz 2018: 35). The axe from Bašnice is 10.8 cm long, the blade is 2.8 cm wide and the eye is about 1.7 cm wide, which is significantly less than the usual for type IB.5.30 (usually 15-20 cm in length), but the axe from Bardy reaches similar dimensions (length 13.4 cm, blade width 4.6 cm, eye diameter 2.1 cm). It is also worth mentioning the length of thorns is 4.75 cm. According to Jiří Košta, curator of National Museum of Prague, the axe is therefore a miniature that was made for child burial. The same opinion shares expert Naďa Profantová that points to a small measures of IB.5.34 type axe from grave 79 from Stará Kouřimi (personal discussion with Naďa Profantová). Another decorated axe, but without applied precious metal, is the mentioned axe from Barkowice Mokre. Kotowicz suggests the possibility that the chopped grooves on some axes may have initially been filled with precious metal that rusted over time (Kotowicz 2018: 34), but we do not know if that was the case of the axe from Barkowice. The fact that both decorated axes are located in Poland, where the tradition of decorating axes was more established, may indicate the connection of the Great Moravian environment with the territory of today’s southern Poland, so we cannot exclude the possible Polish origin of Bašnice axe. Another decorated bearded axe is the axe from the grave 221 discovered in the Slovak locality Borovce; the whole surface of the axe was apparently decorated with a non-ferrous metal (Staššíková-Šťukovská – Brziak 1995). So far, only three Early medieval axes decorated with non-ferrous metal from the Czech Republic has been known – the axe-hammer from the grave 120 of Stará Kouřim, whose origin is placed in Khazar Khanate or today’s Iran (Macháček 2000), atypic broad-axe from the grave 1994 in Mikulčice that burnt during the deposit fire in 2007 (Luňák 2018: 79-80) and the axe from grave 22/05 from Klecany, which was decorated with two inlayed stripes of different copper-alloy wire (Profantová 2010: 72-74; 2015: Tab. 18.3, Fototab. 16.6). 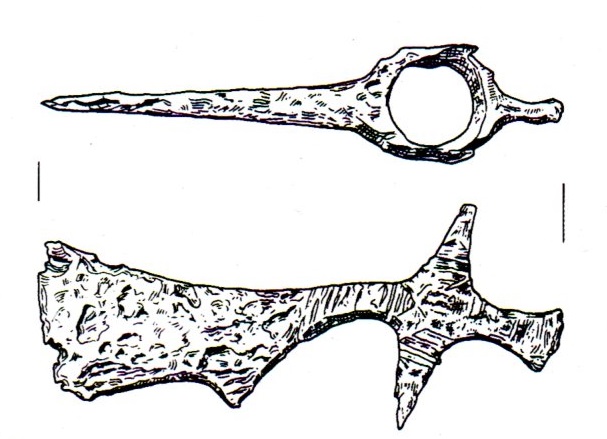 You can download all dimensions taken during the January 2022 documentation using the following link:

In cooperation with Chilean industrial designer and reenactor Carlos Benavides, we have prepared a digital reconstruction of the Bašnice axe. Images of the reconstruction and video are offered for free distribution and can be downloaded via the following link: