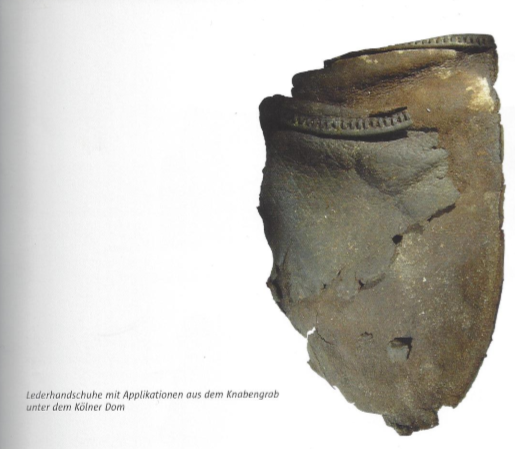 Early Middle Ages provide us with only decent traces of iron mail being used as a hand protection. The first group of finds consists of protection represented by mail. The most important find of this kind comes from grave no. 8 in Swedish Valsgärde, which contained guards for both legs and one hand, originally misinterpreted as chestplate (Arwidsson 1939; Arwidsson 1954). Iron mail was most probably attached to these guards and in case of the right hand it was used as a coating of the presumably leather mitten or glove (Vike 2000). This find is dated to the 7th century. That is the same for another probable find, a fragment of iron mail from grave no. 119 in Castel Trosino, Italy, which was found near the deceased body’s hand (Beatson 2011–12). Other Caucasian finds were published by Kazdajeva and Malašev (2020). The second group consists of lamellae covering the upper part of the hand, which can be found in three localities. The first find comes from a Lombardic tomb in the Italian locality of Sovizzo. The second find was revealed in the Roman workshop of Crypta Balbi, in which lamellae made of gilded bronze and iron were found, probably coming from two gloves. Both of these Lombardic finds from Italy protected the back of the hand and were placed parallel to the hand, not vertically, which explains the constant length of the lamellae around 12-13 cm. The third lamellar find comes from the Dutch locality of Lent and differs from previous pieces in that they are not constant lengths, so it is possible that they protected fingertips. If we extended our search beyond Europe or the early Middle Ages, we could, for example, find segmented gloves used in Italy (3rd century) or today’s Iran (7th century).

Lamellae from the Lombardic grave from Sovizzo, Italy, and their reconstruction.
Source: Helvargar.

Fragments of a lamellar glove from the Dutch locality of Lent.
Source: Evan Schultheis.

Claßen-Büttner 2015 = Claßen-Büttner, Ulrike (2015). Nalbinding- What in the World Is That? History and Technique of an Almost Forgotten Handicraft, Wiehl.