A number of our previous articles dedicated to Early Medieval cases and sheaths lead to the conclusion that all sharp tools and weapons (swords, spears, axes, knives, needles and more) were equipped with holsters to prevent injury and wear of blades or points. In the following overview, we would like to look at shears and scissor cases, which belong to the neglected tools, yet widely used in the past. Our scope will be broader to show the continuity of the use of organic materials – wood and leather.

Bronze Age
The oldest wooden shears case we know comes from the British site of Must Farm, dated to 1750 BC – 800 BC, and is not yet published in print. According to available information from the museum in Peterborough, it was found together with bronze shears. The case copies the shape of the shears and the inner space is divided so that the shears fit perfectly into it. There is an opening in the case which may have been involved in attaching the counterpart piece and closing the two parts together. 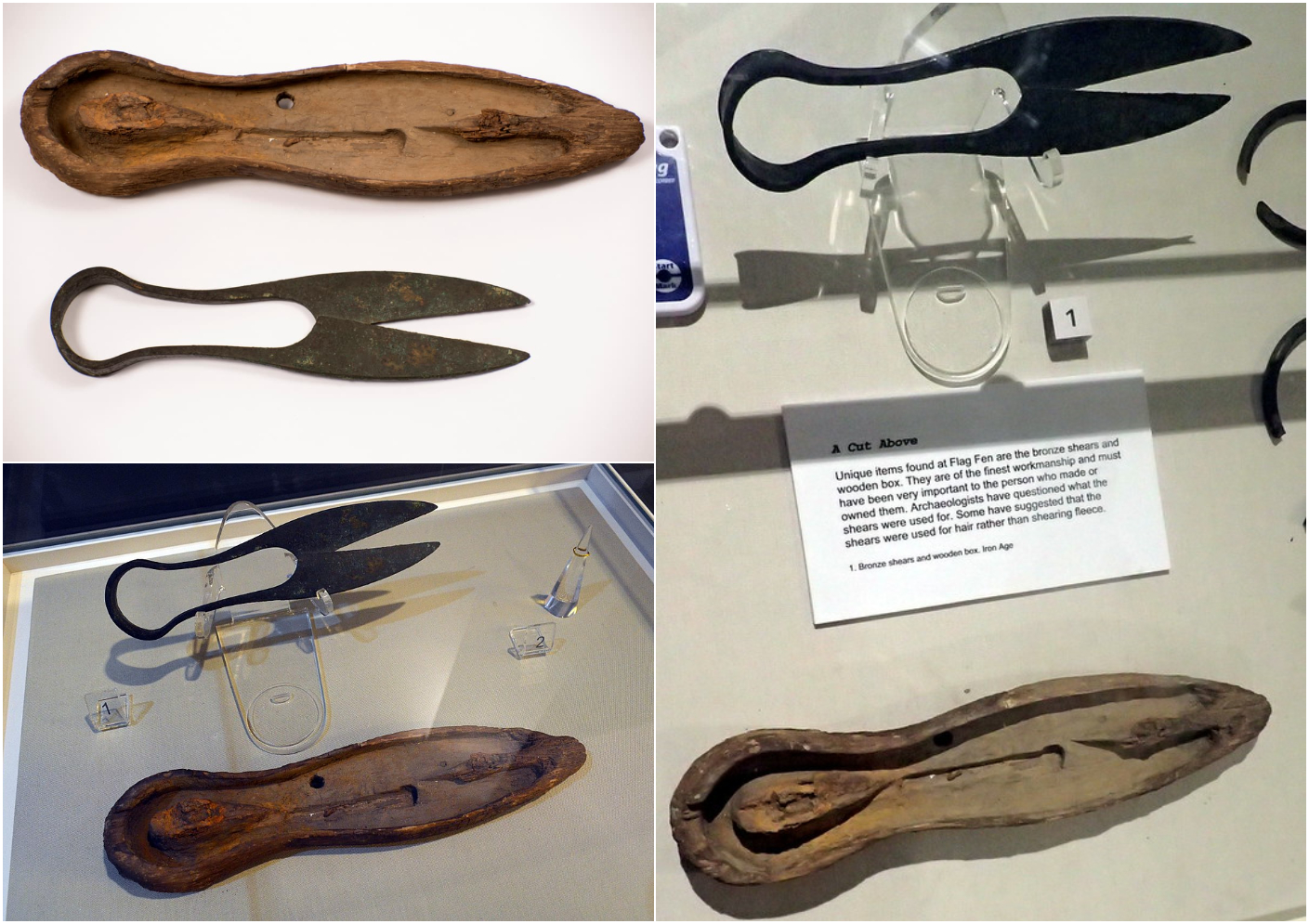 The case from Must Farm. Photos were taken from the website of Global British Archaeology, Wikipedia and Journals of a Time Traveller.

Migration Period and the Vendel Period
From the Scandinavian graves of the Migration Period and Vendel Period, we know at least eleven cases, 8 of which come from Norway, two from Sweden and one from Bornholm. The best-preserved case is the one that was found in the rich male grave from Evebø (5th century, B4590z) in 1889. The case, which is made of two symmetrical halves of deciduous tree wood, copies the shape of the shears and has a polygonal cross-section. There is an opening in the case, which was probably used to close the whole object. Today, the case is significantly damaged and the total length today is 18.5 cm, of which shears 17.5 cm (Arwidsson 1942: 80; Shetelig 1912: Abb. 260 and Unimus catalog). Six other Norwegian cases are made of wood – Eidem (T8589), Skjelde (B5407), Skjold (B9123), Syltebøen (T7393), Ugulo (B6109), Åm (S4687) – and one of leather (Grindheim, S2616). Poorly preserved wooden cases are also known from the graves of Valsgärde 6 (Arwidsson 1942: 79-80) and Lousgaard (Vedel 1886: 414).

The last remaining case is a thoroughly researched piece from mound No. 2 of Högom, dated to about 500 (Ramqvist 1992: 119-120, Fig. 71-3, Pl. 82). The case was stored in a leather pouch, is about 26 cm long and is decorated with an ornament. The proposed reconstruction suggests that the case was two-pieced and that a large part of the lid was rotatable thanks to the rivet, which allowed the shears to be removed. 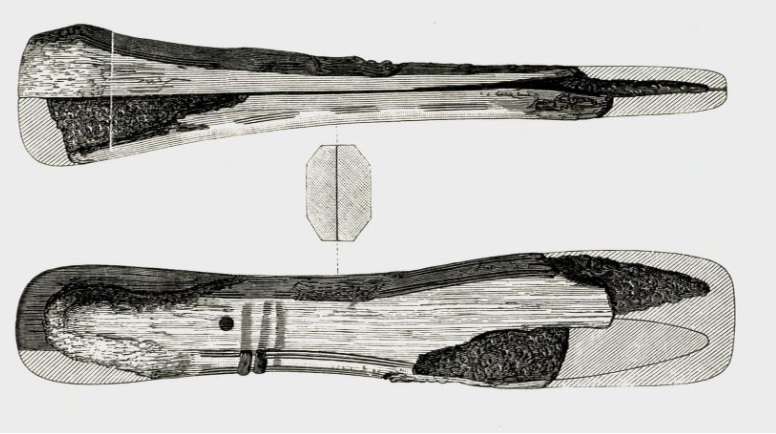 Viking Age
We record up to 4 specimens from the Viking period, the most interesting of which comes from the famous grave No. 4 from Fyrkat (Roesdahl 1977: 97, Fig. 135). The shears from this grave are tinned and were placed in a poplar wood case that copied the shape of the shears. The total length of the shears with the case is 19.3 cm. In the center of the widened part of the case, there is a rivet made of copper alloy, which apparently served to close the case, similarly to the Högom case, but not the same. We also know a leather specimen from Bringsverd from Viking Norway (C7845; Preus Schou 2007: 30); a possible wooden case was also found in a grave from Frøyland (S12295). The fourth sheath remnants comes from the grave 13/07 from Giecz, Poland, possibly from the 2nd half of 11th or 12th century (Indycka 2016: Ryc. 11).

Medieval cases
As later, but very interesting analogies, we will mention three leather cases from Polotsk and the Troickij excavation in Novgorod. The case from Polock can be dated between the 12th and the first half of the 13th century and is designed for small shears (Kurbatov 2012: 188, Рис. 40.2, 41). The leather is thin and decorated with a latticework decoration, sewn on the edge with rolled wire, which is also used to create the decorative curls. The case is equipped with a strap for hanging.

Cases from Novgorod are dated to the period from the second half of the 13th century to the 1380s (Matechina 2009: 96-7, Табл. XIX). Novgorod cases are built for rotary scissors – this parallel may be remarkable to the Viking Age reenactor as rotary scissors were also used in Viking Age Scandinavia (Arwidsson 1984: 196-7; Roesdahl et al. 2014: 326-7). Both undecorated cases are made of two parts – front and back with a flap – which are sewn together along the perimeter. The flap is used to close the case and is equipped by straps threaded through the holes prepared in the parts.

From the period of 12th-15th century, there are a number of leather sheaths from Western Europe as well, which are very well summarized by Volken and Goubitz in their book “Covering the blade. Archaeological Leather Sheaths and Scabbards” (2020: 188-193). As far as we know, they do not have a wooden core, but some have a cap (Volken – Goubitz 2020: 193, Fig. 23).

To create this article, we were inspired by a beautiful case made by the project fan Christofer Adolfsson. This great reenactor also offered us photos of his piece, for which we thank him very much. The presented case is loosely based on finds from Must Farm, Evebø and Valsgärde 6 (it is two-part and provided with a hole), but it bears its own specific features, especially decorative longitudinal lines. 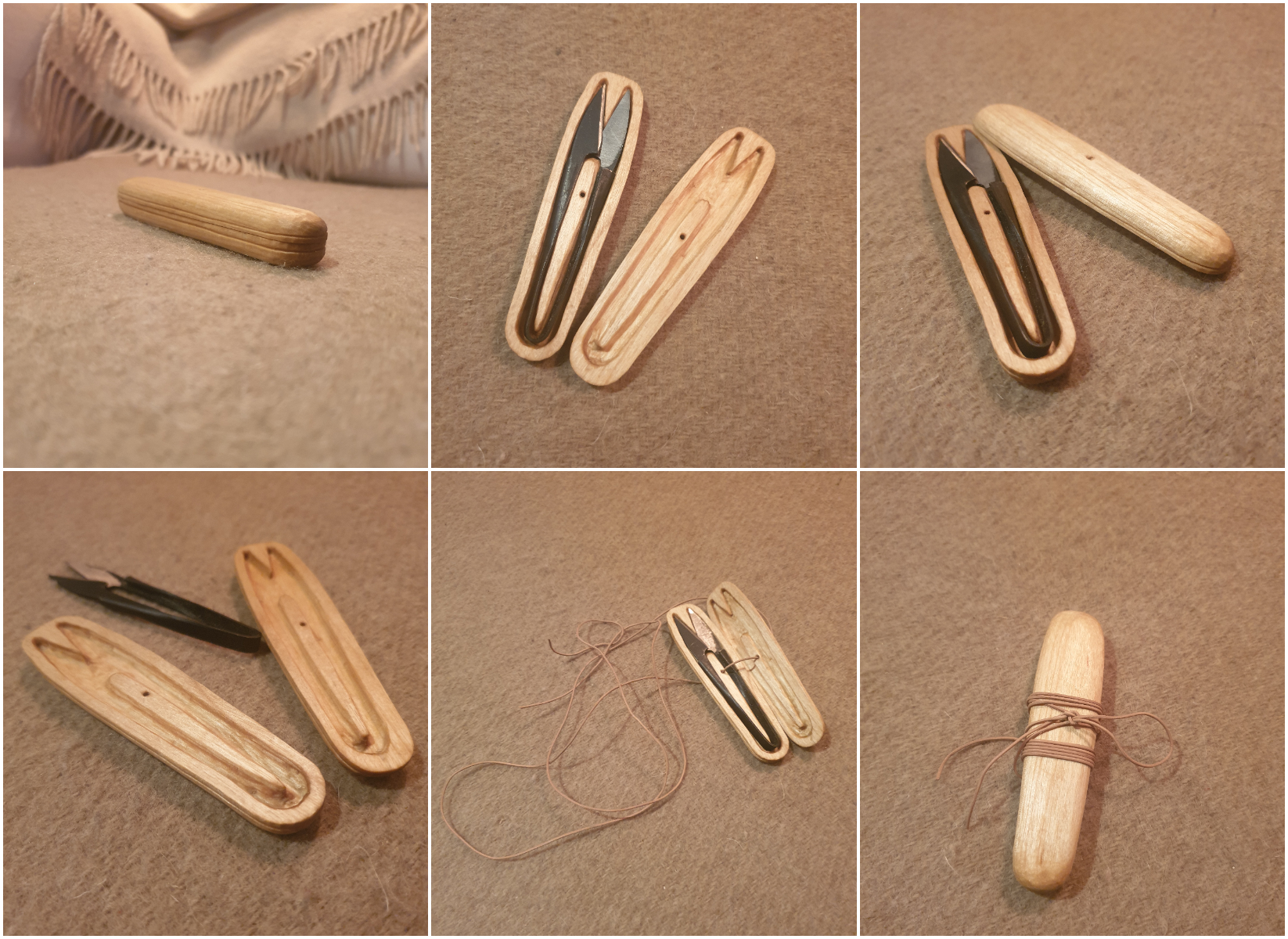 The case made by Swedish reenactor Christofer Adolfsson.