Modification of an M type axe

A fan of the project, Martin Hrdlička, for whom I have been consulting on the creation of a Curonian Early medieval costume for a long time, mentioned his M type ax (“Dane axe”) in August 2021, which was one of the weaker parts of his costume. In the state in which the axe was presented to me, the axehead weighing 952 grams was mounted on a 154 cm shaft weighing 1009 g, both components being considerably oversized compared to the originals. As I told Martin, the heads of M type axes move on a size scale from 13 × 13 cm to 33 × 25 cm, which corresponds to a weight range of approx. 100-1000 grams, however, the vast majority of specimens are 16 × 16 cm – 22 × 22 cm and weigh up to 500 g. Due to the size of Martin’s axe (19 × 23 cm), the ideal weight should be at least half a kilogram lower. As the manufacturers of the original axes were very capable of saving material and distributing the weight, the originals have very thin blades (always below 3 mm at the narrowest point), while Martin’s axe was 6 mm thick at the narrowest point.

Instead of buying a new piece, Martin decided to try to adjust the axe by removing the material in places that are oversized compared to the originals. My recommendation, which Martin tried to follow, was a total weight of up to 1000 grams. Using an angle grinder with a lamellar and grinding rough wheel, the head was continuously thinned from 952 to 473 grams (with intermediate stages at 687 and 525 grams). Martin adds that the axe must be thoroughly cooled during material removal. The fact that the shaft was heavier than the axehead suggested that significant differences would also be achieved with this wooden component – the final weight of the shaft stabilized at 524 grams at a length of 135 cm. When assembling the two modified components, Martin reached a pleasant weight of 994 g. If the resulting weapon was sharp or had a narrower shaft hole (32 × 20 mm in the current state), it would be possible to achieve an even lighter product. 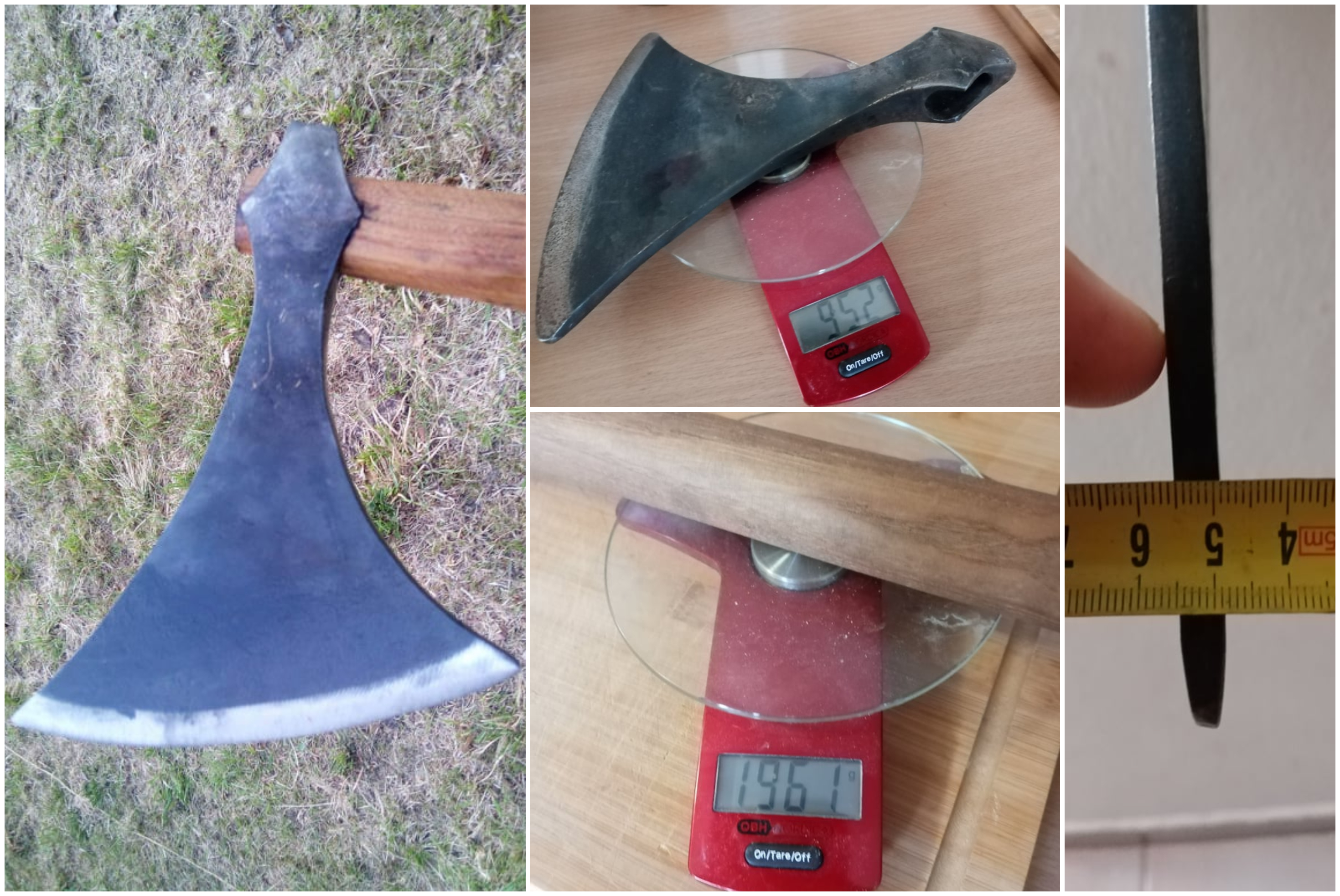 The axe before the adjustment. 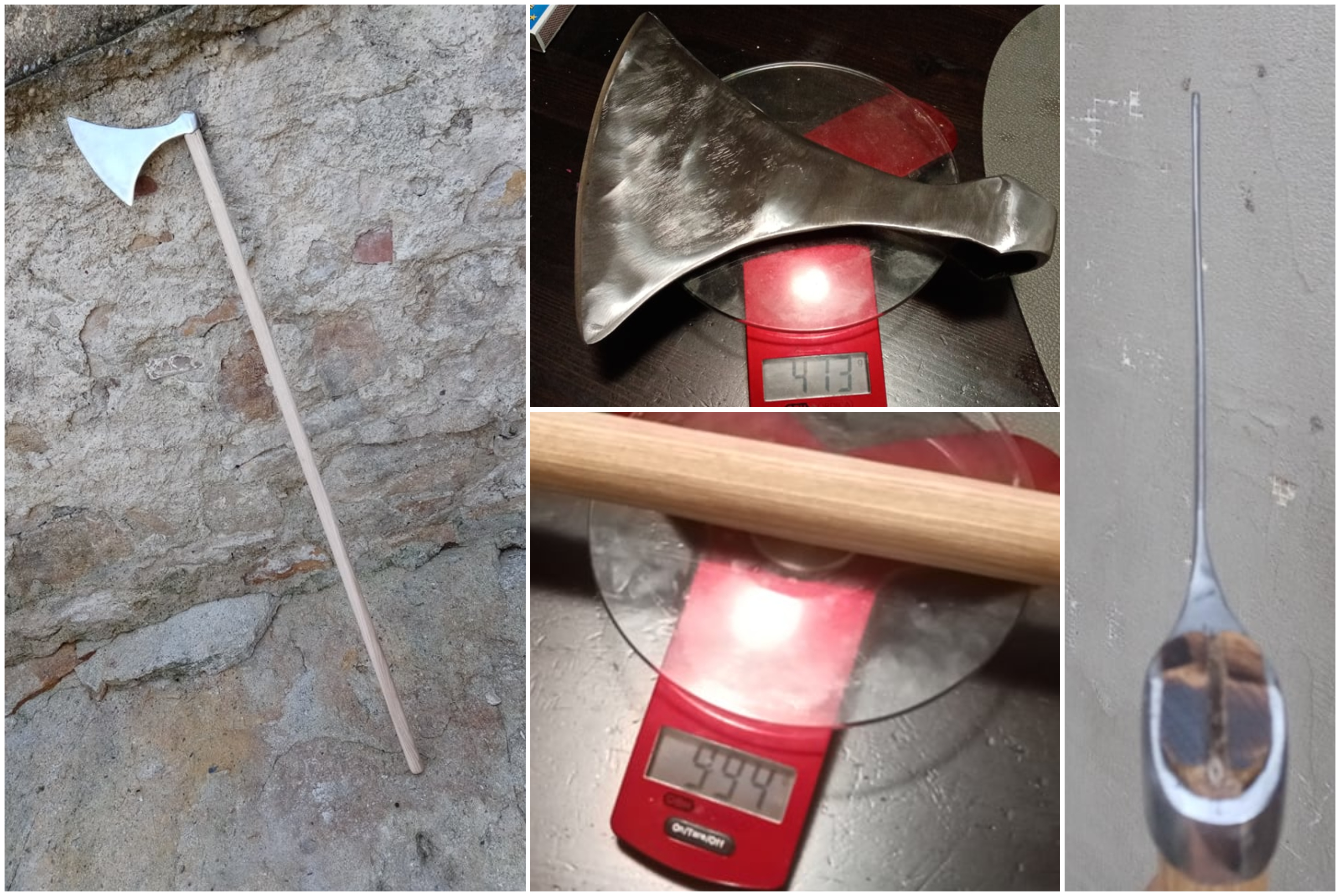 The axe after the adjustment.

The obvious question that arises when reading these lines is whether the axe will withstand deployment in the current form of fights with blunt weapons. The original axes were undoubtedly primarily intended for cutting into non-armoured parts of the body, while modern pieces are designed to the exact opposite – to hit the areas covered by armour (helmet, torso) and are therefore exposed to greater pressure. Personally, I believe that the small dimensions and the resulting reduced weight do not detract from usability in current fights, for two reasons – firstly, today we use homogeneous, far better quality materials, secondly, a trained user can easily estimate which deployment is non-destructive for the weapon – the lighter weapon simply allows for more dynamic fencing work, which may additionally involve the one-handed usage. A more burning question remains whether the construction used for robust axes will last long-term even for lightweight pieces – for a heavyweight version it is unlikely that the product will collapse and therefore certain constructional imperfections are possible, which are not acceptable for subtle versions. During the removal of the material of Martin’s axe, an imperfectly welded bent eye was revealed in the neck area, a feature which Martin tried to grind as much as possible. The following months will show whether the axe will withstand.

Martin emphasizes that when purchasing an M type axe, the most optimal solution is the production of an axe that is light from the very beginning and to order from a skilled manufacturer you can rely on. The removal of material is an attempt to save an item for which the owner has no use and which would otherwise have to be replaced.

I thank Martin Hrdlička for an interesting experiment and sent photos, which outlined the influence of dimensions on the weight of the product. It turns out that many current fighters use M type axes that are twice as heavy as the original pieces. If you are interested in light axes, I can also say that the production can be understood to a certain extent as a game for every gram saved whilst maintaining functionality. While the period people knew exactly how to distribute weight with respect to subsequent use, today we can only try and test.