In 2014, the British Museum in London hosted the spectacular traveling exhibition “Vikings: Life and Legend”, which was exhibited a year earlier at the Copenhagen National Museum and moved to Berlin in 2015 (where I had the opportunity to see it in person). It is a paradox that the exhibition, which focused on dispelling the myths circulating about the Viking Age, created one of the greatest reenactor myths of recent years – “the helmet of Weymouth”. 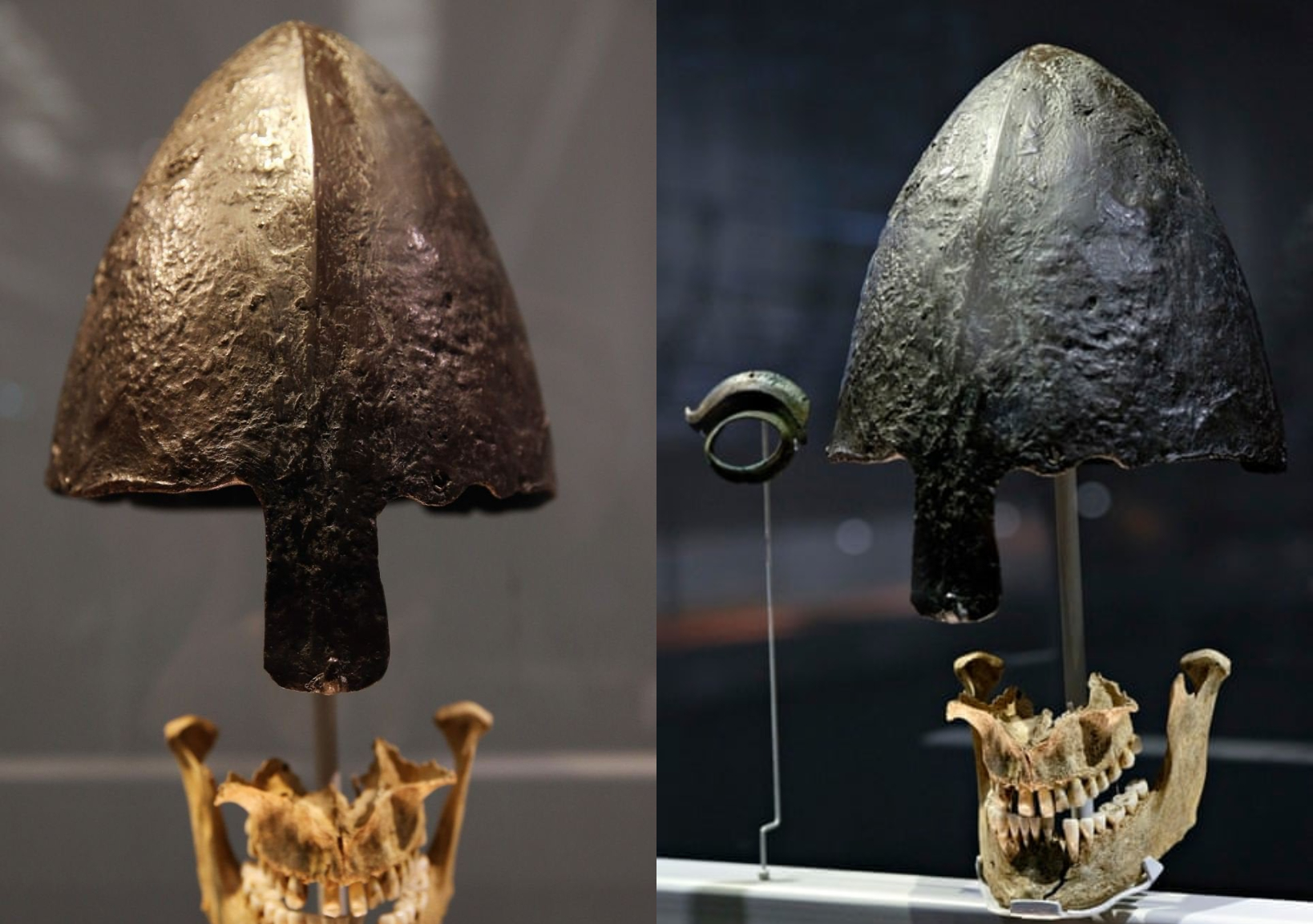 Helmet on display at the British Museum in 2014. Source: Getty Images, The Guardian 2014.

To some extent, the exhibition served as the first presentation of the remains of executed men, found in the mass grave from Weymouth (also known as Ridgeway Hill) in 2009. A separate section was dedicated to these remains, while a skull part was displayed in a display case together with the helmet from Lednica Lake and the helmet fragment from Gevninge. The captions in the exhibition and the accompanying catalog clearly distinguished these objects (Williams 2014), however, the online media informing about the exhibition used shortcut and wrote about “Viking jawbone and the helmet from Weymouth” (Daily Mail 2014; Irish Times 2014). These newspaper articles tended to have a smaller impact on the reenactment community, but this information became more serious when it was shared by influential and respected channels, such as Irish Archaeology. The second and probably even more serious problem is that the photos with the misleading caption are stored in photobanks (eg Getty Images, but also Pinterest) that are very well indexed by web search engines and that are heavily used by printed media as sources of illustrations. As long as these photos are saved with these captions, the helmet will appear at the top of Google Search and can easily appear in the media.

I record the first discussions in the reenactor sfere from the beginning of 2015, the first “reproductions” from 2016. Some manufacturers were easily persuaded and withdrew their products from sale, some still offer them (Płatnerz Czcibor and his resellers Reenactment Market and Viking Emporium). In some cases, the different appearance of helmets from Lednice and “Weymouth” was pointed out, which is caused by two main reasons – firstly the very poor condition of the helmet from Lednica, which is regularly restored and has undergone a number of modifications since the discovery in 1959, secondly the existence of several more or less successful copies. The exhibition catalog explicitly mentions that the helmet on display is a replica, not an original (Williams 2014: 268).

For potential supporters of the Weymouth helmet theory, we can add that the “Weymouth helmet” is not listed in the Vikings: Life and Legend exhibition catalog, unlike the Weymouth jawbone (Williams 2014: 267) and the Lednica helmet (Williams 2014: 268). The helmet is not mentioned anywhere in the Ridgeway Hill mass grave documentation, which literally says that due to the absence of any objects, the executed men were probably naked (Loe et al. 2014: 226).

The damage caused by this myth will be repaired for many years to come, and it is possible that we will meet traders offering reproductions of this helmet quite regularly. Apart from the very fact that reenactors receive information without verifying the literature, it is also somewhat unfortunate that out of the many hundreds or rather thousands of interesting artefacts of the exhibition, attention was paid to the helmet, which was not original at all.

Daily Mail 2014 = The British Museum’s Viking exhibition to capitalise on our obsession with Nordic Noir. In: dailymail.co.uk. [2021-02-08]. Available from: https://www.dailymail.co.uk/travel/article-2574607/British-Museum-Viking-exhibition-capitalises-obsession-Nordic-Noir.html.

The Guardian 2014 = Vikings at the British Museum: great ship but where’s the story?. In: theguardian.com. [2021-02-08]. Available from: https://www.theguardian.com/artanddesign/2014/mar/04/vikings-british-museum-ship-story.