In the next part of the sword series, I decided to focus on a small group of rare and not very widespread swords – Petersen type G. This type of sword is practically unknown among the reenactors, probably due to its unconventional appearance or limited distribution. The aim of this article will be to introduce this type to the general audience, to indicate its distribution and anatomy. 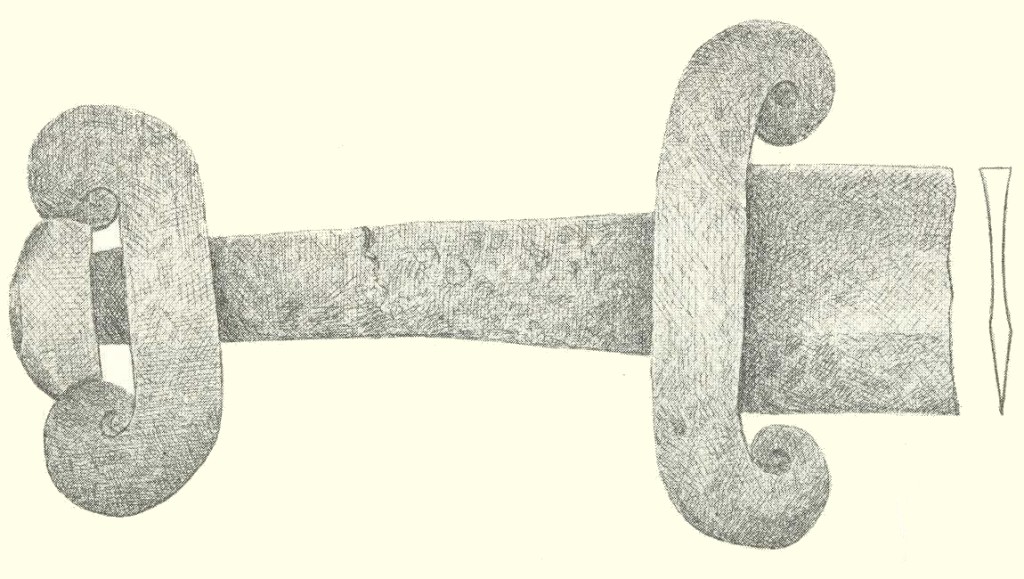 Type G hilt is considered rare (Andoshchuk 2014: 55). We do not find decorations made of non-ferrous metals on it. The upper guard and usually also the lower guard are equipped with tapered ends that are twisted into symmetrical spirals or volutes pointing from the handle outwards. Although one knowns lower guard is straight (C21660), lower guards are usually twisted in the same way as the upper guards, leaving the space between the spirals and the blade. In one case, the spirals of the upper guard are replaced by solid plates that take the same area, and the guard shows only a slight bend at the ends (C12749). In almost all cases, the pommel consists of a four-sided plate of various heights, on which the tang is riveted, as in case of type F. In two cases, the tang is riveted directly on the upper guard (C12749, SHM 19086), similarly to type M. Thus, we see that although there was a certain basic shape, it was relatively often hybridized. For the identified pieces, the lower guards are 8-9 cm long, the upper guards are 6.5-7 cm and the grips reach lengths of 7.8-8.5 cm.

Just as the hilt varies, the blades of swords of this type show quite numerous variations. Of the total of eight pieces, five are single-edged and only three are double-edged. As far as I know, only three finds are complete enough to determine their overall length and shape (C12749, C21660, SHM 19086). The single-edged sword C12749 is about 77 cm long, of which the blade is 61.5 cm. Both the C12749 and the fragmentary C1554 have a characteristic cross-section, which is characterized by a edge extending to about one third of the blade and a fuller. A similar cross-section, but without a fuller, can be seen at SHM 19086, which reaches a total length of 65 cm with an excellent degree of preservation (Andoshchuk 2014: 357, La 1). The most interesting single-edged blade is the sword C21660, which is made of the blade of the Frankish pattern-welded scramasax from the 8th century, installed perhaps in the early 9th century; this well-preserved piece has a total length of 65.5 cm and a weight of 746 g (personal discussion with Vegard Vike). The only double-edged specimen we mention here is fragmentary (measuring 36.5 cm), but remarkably ornamented by pattern-welded rods on both sides of the blade. The width of the blades for the detected single-edged swords is 5.3–5.5 cm. 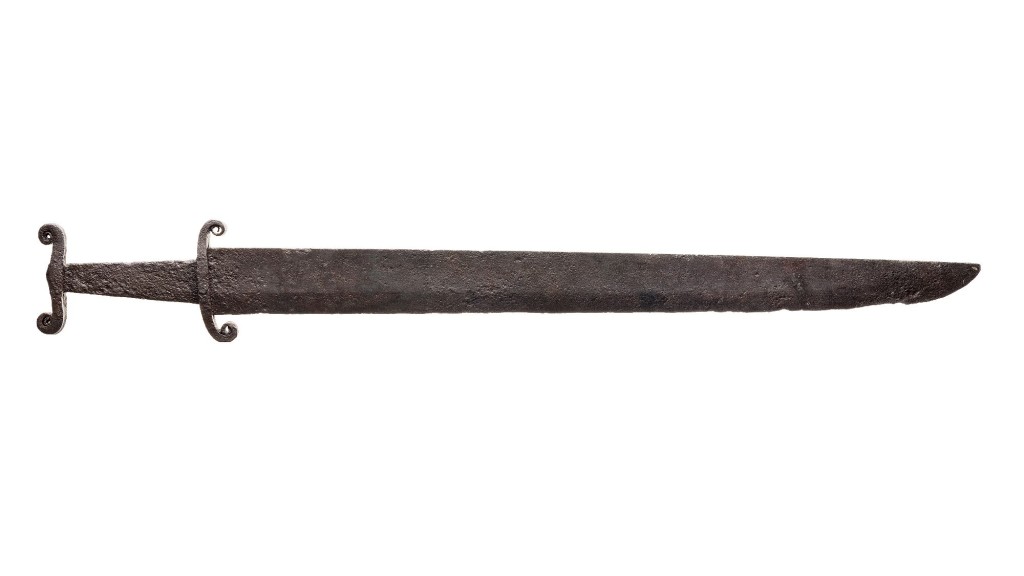 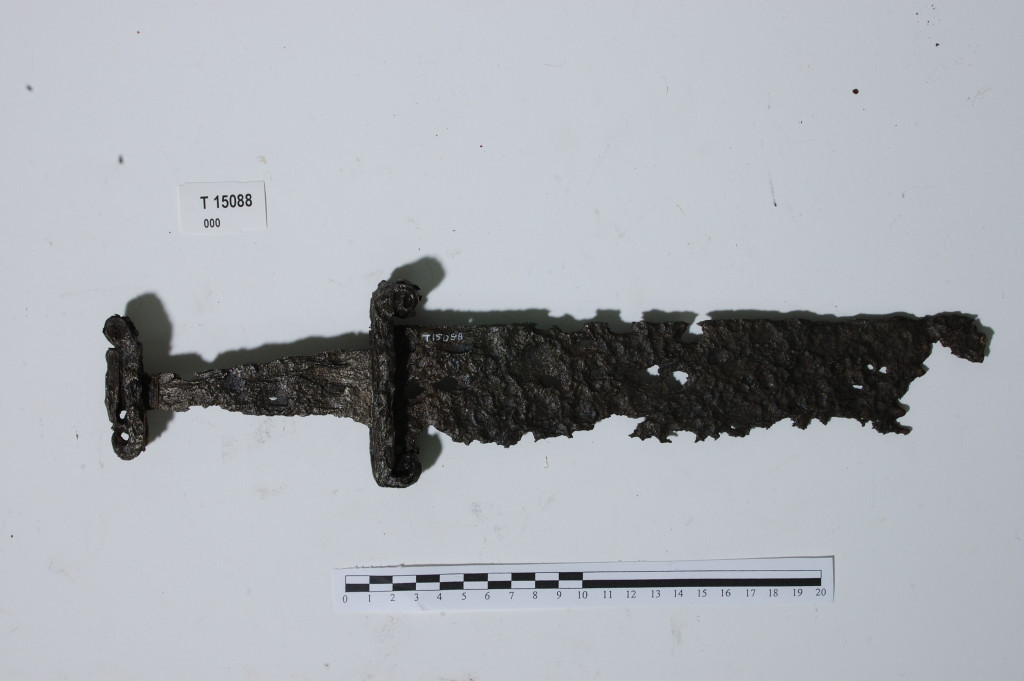 A double-edged sword found in a mound at Bjørnstad in Buskerud, Norway (C16208). The blade has pattern-welded rod marks on both sides. The lower guard is missing. The current length of the blade is 36.5 cm. Photo: Mårten Teigen, Cultural and Historical Museum in Oslo.

A single-edged sword found in Rokstad in Buskerud, Norway (C12749). Hybrid variant with solid plates instead of spirals. The total length is about 77 cm, of which the blade is 61.5 cm. Photo: Mårten Teigen, Cultural and Historical Museum in Oslo.

As for the distribution, Jan Petersen (1919: 84–85) is often quoted for writing that only four specimens found in southeastern Norway are known (2 specimens from Buskerud and 2 from Oppland). Petersen’s list was extended by two finds from Telemark by Per Hernæs (Hernæs 1985: Tab). This conclusion is copied by Mikael Jakobsson (1992: 201). Fedir Androshchuk (2014: 55, 357) returns to Petersen, mentioning only four Norwegian examples, and mentions one Swedish piece that was found as early as 1929 and escaped the attention of researchers since that time. While researching in the Norwegian UNIMUS catalog, I found another Norwegian piece (T15088), this time from Nord-Trøndelag. So together we have eight specimens, which are widespread in today’s Norway and Sweden. 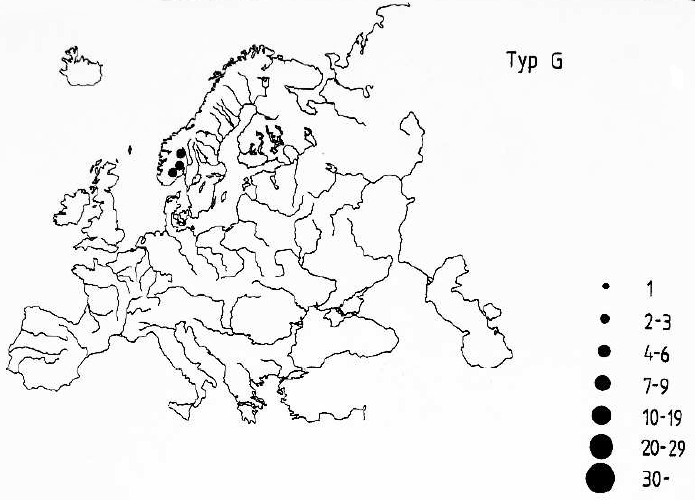 Polish researchers also include the sword found in the Gulf of Szczecin in the 1960s (Pudło 2011). It is a hybrid sword that resembles an L type sword in general appearance, but has a spiral upper guard of a G type sword. As we indicated above, it is not uncommon for type G to be related with hybrid, reassemled swords – and it is possible that the old blade and upper guard could be upgraded to type L, with the author deciding to use the old component. What is also unconventional is the fact that the pommel including the upper guard appears to be plated with silver. 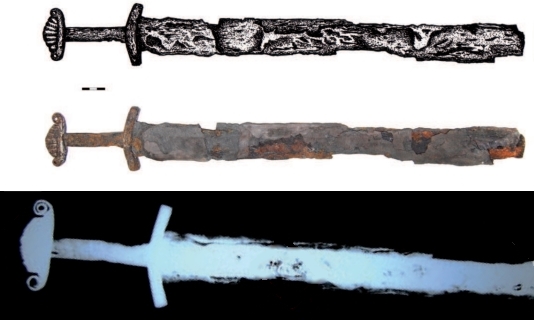 The chronological classification of this type of sword is complex. We find swords in context-free situations or broken graves. In our opinion, we can use both hilt and blades for approximate dating. As for the hilt, Petersen suggested (1919: 85) that it was an early type that can be dated before type F, which seems to be a hasty and unsubstantiated conclusion (Andoshchuk 2014: 55). However, it is true that both types share some elements, especially the short pommmel cap. It is quite possible that types F and G evolved together as descendants of type A in the first half of the 9th century. According to Ian Peirce, the type G may be a more ornate version of the F sword (Peirce 2002: 47). Type G together with types C, F and M belong to the group of swords, which have ferrous hilt and and a large portion of single-edged blades (Hjardar – Vike 2011: 169). The single-edged blade can be seen as another characteristic feature, which points to the period before the middle of the 10th century. The sword C21660 with a blade made of Frankish scramasax also points to the beginning of the 9th century, which is the period when these weapons still occasionally appear in Norwegian graves (eg B1188). Future finds may be able to provide a better testimony to the dating of G type swords. It should be noted that some authors date the origin of the G type to the end of the 8th century (Jones 2002: 18).

The G type hilt is so outlandish in appearance that it is referred to as a blind developmental branch. Petersen goes so far in his description that he considers G type swords to be strange and necessarily foreign, although he does not dare to suggest a place of origin (Petersen 1919: 85). After less than a hundred years and several other finds, it is becoming increasingly likely that G type swords have their origins in Norway. The same conclusion was expressed by Peirce, who compares the G type distribution to the F type distribution (Peirce 2002: 47), and Androshchuk (2014: 55), who interprets the sword found on the shore of Lake Niåtsosjaure as a Norwegian product that has traveled to present-day Sweden thanks to Norwegian-Lappish contacts mentioned in the written sources.

The idea that G type swords would somehow follow prehistoric antenna pommel swords, some of which have very similar spiral ends, is, of course, tempting, but unsubstantiated. A far closer analogy is the Baltic antenna sword, which dates back to the turn of the 10th and 11th centuries (Kazakevičius 1996: 15–18, 127–128). This Baltic parallel is definitely worth mentioning. According to Kazakevičius (1996: 18), it is a rare local type, which undoubtedly developed in the territory of today’s Lithuania and Latvia, where it occurs in only 12 specimens. The hilt, which consists of an antenna-like upper guard terminated by spirals or plates and a curved or straight lower guard, is always mounted on a narrow single-edged blade. The pommel cap in the form of a four-walled plate, on which the tang would be riveted, is missing at the Baltic swords and the tangs have been riveted directly on the upper guards. Although Kazakevičius (1996) does not comment on the G type and does not associate it with the Baltic pieces, the common elements with G type swords may be single-edged blades, in some cases straight lower guards and, of course, the shape of an antenna. A possible analogy can also be seen in dussacks with boat-shaped guards from the 15th century (Žákovský 2012). According to Žákovský (2012: 695), these single-edged weapons could find application both in armed conflict, in hunting and in everyday life. 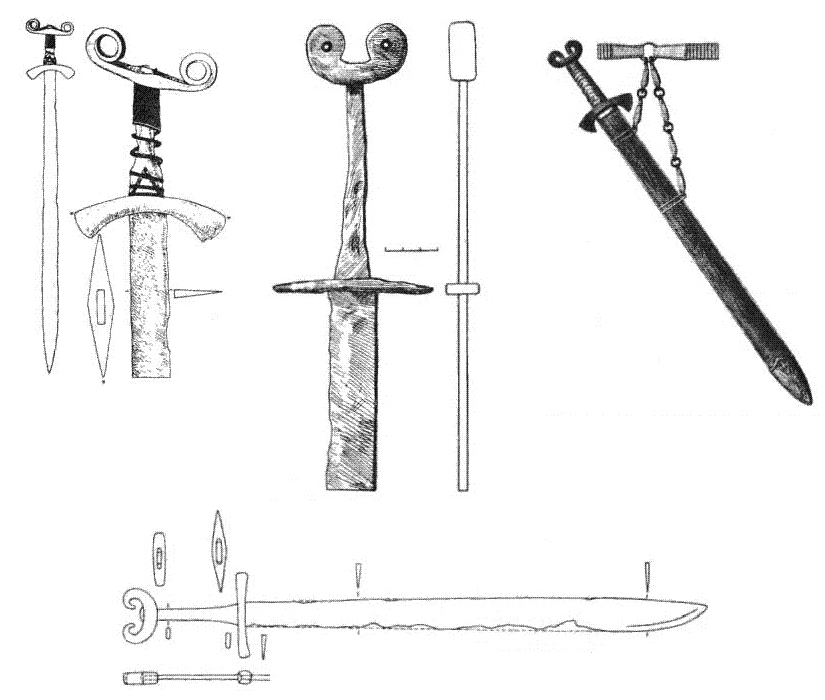 As we can see, all the analogies we have mentioned are spread across time and space. Thus, they are more likely to have evolved independently of each other. The common denominator, which caused the emergence of similar elements, could be the function and the need for a more aesthetic processing. One possible model is that similar decorative elements appear when a sword with a simple, straight bar becomes a fashion, and there is a need to deviate from the standard and exceed it. One can also see a certain tendency to use the G type in the refitting of old blades; a simple construction of this type had to play its role in such a situation. From a functional point of view, the spirally shaped guards allows a slightly different fencing possibilities by catching the opponent’s blade. In this context, it should be mentioned that the surviving complete weapons are relatively short and could possibly find application in a certain type of armed conflict, where this feature could be used. The idea is to use it in duels in which – as far as we can trust some family sagas – long swords were not always tolerated. For example, in the Kormáks saga (Ch. 14), Bersi is accused by Þorkell that his sword is longer than prescribed by the duel law. The spiral end also offers a good opportunity to firmly fix the sword in the scabbard with straps (friðarband), which could be desirable at a time when the owner wanted to visualize the guaranteed peace. 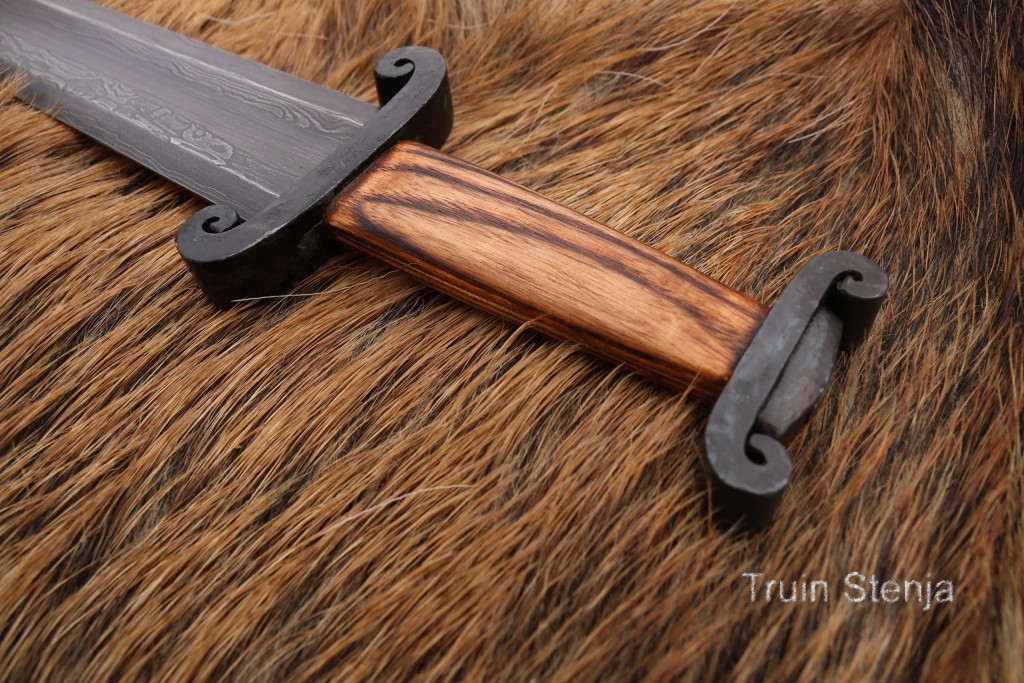 Replica of a G type sword. Made by Dmitry Chramcov.