In this article, I would like to present the work of my friend and colleague, craftsman Jan Zbránek from Marobud group. With my cooperation, he made an excellent blunt version of the Petersen type O sword from Dukstad (B 1103). 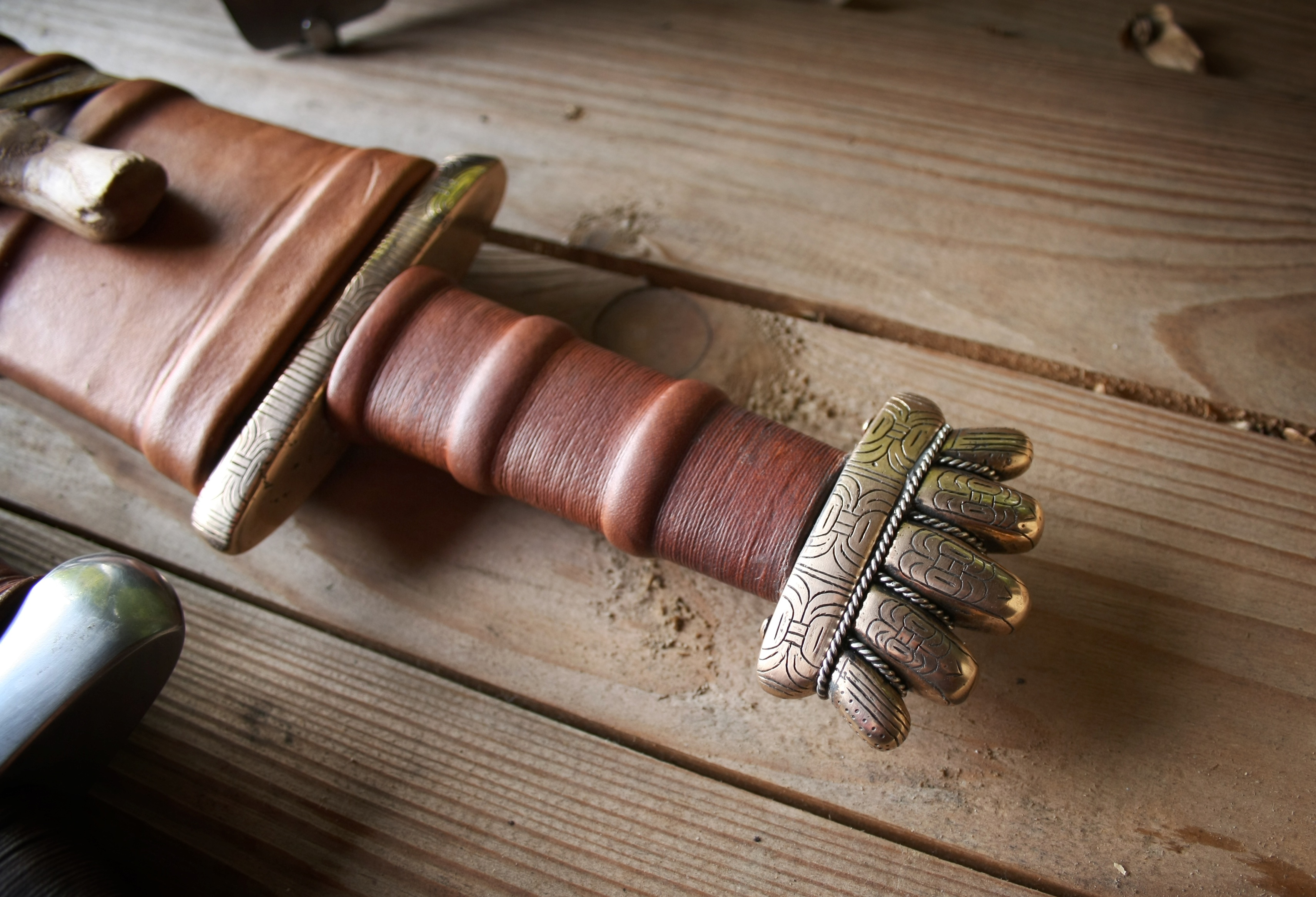 The whole project started in spring 2016, when Jan ordered a blunt blade from swordsmith Ondřej Borský, aka Ernest’s Workshop. The idea was to create a more quality and unique sword than the average standard in the Viking reenactment. Another criterium was the fact the sword should be suitable for the impression of the 10th century Norway. Jan had no experiences with swordmaking, but he has bronze casting skill, since he makes jewelry for his store Skallagrim – Viking Jewelry. That’s why Jan asked me whether there are any Norwegian swords with bronze cast hilts.

Bronze cast sword hilts occur in every corner of the Viking world. Basically, bronze cast hilts are typical for Petersen types O and W swords, as well as for some type H, L-variant and Z type swords, Late Vendel period swords and for rare types beyond the Petersen typology. Even though both types O and W date to the first half of the 10th century, Jan decided for the type O, because it has more examples in Norway and it is more decorated. Examples of the type O were found in Norway, Sweden, Denmark, Iceland, France, Germany, Great Britain and Ireland, while sword of the type W were found in Norway, Sweden, Germany, Great Britain and Eastern Europe (Androshchuk 2014: 71–72, 79–80; pers. comm. with Lars Grundvad).

Petersen type O is described as the sword with the hilt that consist of the lower guard, the upper guard and the five-tongue-lobed pommel. The type is considered to evolve from the Carolingian type K (Żabiński 2007: 63). Even though Petersen divided the type O into three subtypes (Petersen 1919: 126–134), his typology was recently upgraded by Androshchuk (Androshchuk 2014: 71–72). As a result, type O is now divided into two main subtypes. The subtype O1 is characteristic by the pommel and guards that are cast in bronze (/made of iron core covered with bronze), often decorated with various knots. There are at least 12 examples of this subtype in Norway (Androshchuk 2014: 71). The subtype O2 is remarkable for the pommel and guards that are made of iron and decorated with silver plaques with engraved interlacing or animal motifs. There are at least 8 examples of this subtype in Norway (Androshchuk 2014: 72). While the subtype O1 is more or less evenly distributed in Norway, the subtype O2 has more coastal concentration, suggesting the higher probability of being imported objects (Żabiński 2007: 63). All swords of the type O are two-bladed, and there is a sword with an ULFBERHT inscription on the blade (C 16380) and two other swords with pattern-welded blades within the Norwegian material (Androshchuk 2014: 71).

Jan made up his mind to recreate the a relatively unknown find B 1103 from Dukstad mound, which belongs to the subtype O1. Together with the sword, an axehead and two spearheads were found. The Unimus catalogue has only vague information about the sword and quotes a book which is about 150 years old. Unfortunately, we have not contacted the museum of Bergen, so we had to improvise. Still, I dare to say that our improvisation is based on scientific knowledge.

Photos of the original sword from Dukstad (B 1103), Universitetsmuseet i Bergen.

For example, the catalogue contains the information that sword is “30 inches [76 cm] long and intentionally bent“, but the attached picture of the sword clearly shows the blade belongs to the Geibig’s type 2, which is dated to period between 750 and 950 AD and is characterised by a gently tapering blade with long fuller of near uniform width, blade length between 74 and 83 cm, blade width between 4.8 and 6.2 cm and fuller width generally between 1.7 and 2.7 cm (Geibig 1991: 85, 154; Jones 2002: 22–23).

The size given by the catalogue is not impossible – there is a Petersen type O sword in British Museum collection (1891,0905.3.a), which has the same lenght – but this sword is described to have an “extremely short blade” (Pierce 2002: 90). The fact that the blade is bent complicated our chances for closer estimation and we rather used average, typical parametres of original Geibig’s type 2 blades; 77 cm long and 5.5 cm wide blade. This fact makes the complete sword 92 centimetres long, which is not so far from several type O swords (Kaldárhöfði: 91 cm; Berg: 95.8 cm; Eriskay: 97.5 cm).

While the original handle is “3 1/2 inches [9 cm] long“, Jan made his handle 1 cm longer for comfortable usage, which is a necessary compromise. Androshchuk lists 140 swords with the the lengths of handles ranging from 6 to 10.8 cm: “Most swords have grips 8.5-9.5 cm long, which could be estimated as the average width of a human palm. However, there are also other lengths of grips, which evidently means that sword hilts were assembled with taking into account the physical data of the customers.” (Androshchuk 2014: 105). The rest of the sizes on the sword recreation were proportionally estimated. The decoration, which is not well preserved in the case of B 1103, was carefully redrawn and compared to other known decoration of type O swords. It has to be stressed we had no chance to examine the sword personally, so we could miss some details that are invisible on the photos, like the side decoration of both guards.

The result of the research was put to the graphic visualisation. Jan’s brother Jakub made a 3D layout under our detailed supervision. When both visualisations were made, Jan could better imagine the finished sword. After unsuccessful tries to make models of wood, Jan decided to order plastic models from a Czech company called MakersLab. What a fascinating experience to hold in hands the object which was on the paper seconds ago.

Models were brushed, polished and prepared for casting. Jan used the simpliest method, the casting into two-piece sand mould. During the first casting, two of three components were successfuly cast. The last component, the upper guard, was cast during the second try. It was a good experience for Jan, because until that time, he cast only small pieces of jewelry. Subsequently, metal fittings were shaped to the desired form; the sand mould casting is not perfect and a cast object requires a lot of additional work.

Afterwards, the chiselling of the ornament followed. When the work was done, it was necessary to put the fittings onto the tang. To reduce the risk, Jan used a modern drilling-machine and a file. After the work was successful and aesthetic, Jan fixed the twisted silver wires around the pommel and in-between lobes of the pommel. In case of original sword, the wire was missing, but five holes for the wire are still visible. Various methods of the applied bronze or silver wire can be seen on some type O swords (for example, the sword from Eriskay; or B 1780 and B 4385 within the Norwegian material).

The final phase consisted of woodworking and leatherworking – the handle and the scabbard. Regarding the handle, the original sword had no traces of the handle; however, several swords of the subtype O1 have relatively well preserved oval handles of wood, including swords from Kaldárhöfði, Eriskay or Rossebø. The wooden handle was then covered with leather for a better grip; the application of the leather corresponds to the Androshchuk type I: “grips with oval-shaped cross-section, made of wood; in some cases there are traces of leather and linen wrapped around the grip” (Androshchuk 2014: 104). When the handle was done, the sword was finished. It weighs 1280 grams; the balance point of the sword is placed 15 cm from the lower guard.

The core of the scabbard was made of two sheets of spruce wood covered with cow leather decorated with raised lines and mouth. Each wooden sheet is less than 5 mm thick, which seems to be a thickness of some preserved pieces (Androshchuk 2014: 43). The leather was sewn on the inner side and was stained in the end. The baldric can be suspended thanks to the ash wood bridge-like slide with animal head terminals, which is attached to the scabbard by twisted yarn. Such a method is highly dubious, but possible, if the extent of our knowledge about Viking Age suspension methods is taken in account. Basically, two main methods are known:

The sword and the scabbard were finished after a half of year in October 2016 and presented during the private event of Marobud group, Sons of the North.

The project involved many people who deserve our thanks. Firstly, we would like to thank to Ondřej Borský (Ernest’s Workshop) and his skill, because the blade is very well done. Secondly, our praise goes to Jakub Zbránek and his grafic skills. We have to mention also guys from MakersLab, who did a good job, and Unimus catalogue. We would like to also express our gratitude to Martin Zbránek and Valentina Doupovcová for documentation. The project would have not existed without the support and patience of our families. 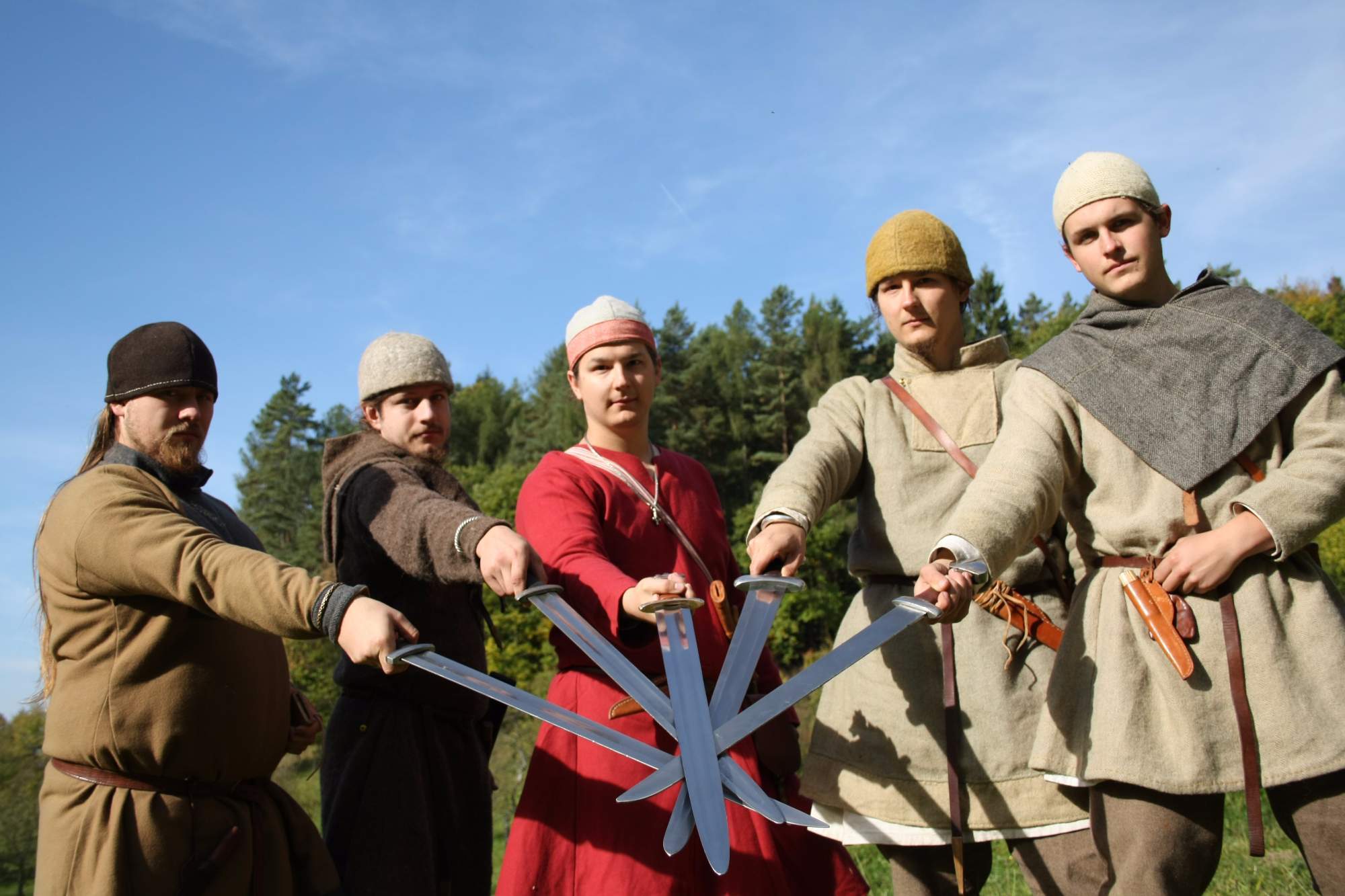