In the next article about swords, we would like to introduce the not yet well-known Petersen type W. As far as we know, this type of sword is rarely reconstructed among reenactors. In the following article we will describe, map and reveal this interesting type.

Type W denotes a sword whose hilt consists of one-piece pommel and cross-guard cast from copper alloy. From the frontal look, the cross-guard is straight, with slightly rounded shorter sides. The one-piece pommel has a simple, semicircular shape with rounded edges and peened tang on the upper side of the pommel. When viewed from above, the shape of both components is lenticular, i.e. tapering towards the edges. Both copper-alloy components are hollow shells (see X-ray). All known components are characteristically decorated. The pommel is decorated by a series of lines that divide the pommel into four fields, which are usually filled with zigzag pattern. This pattern is well visible on the cross-guard as well. In two cases, cross-guards are decorated with concentric rings (Nedošivina 1991: 166), in one case the components are decorated by massive Borre-style knot decoration (Brøgger 1921: Fig. 10). The decoration appears to be cast, although the lines (both dividing and those around the edge) might have been additionally highlighted. Some pieces have a shiny gold finish. The division of the pommel follows the type E and stands very close to the types U, V and X. Type W can be dated to the 10th century. Norwegian pieces date back to the first half of the 10th century (Petersen 1919: 157). Other swords with copper alloy components date back to this period, especially the Petersen type O, which were influenced by the same trend. In Eastern Europe, type W can be found in graves dating to the second half of the 10th century (Nedošivina 1991: 166). 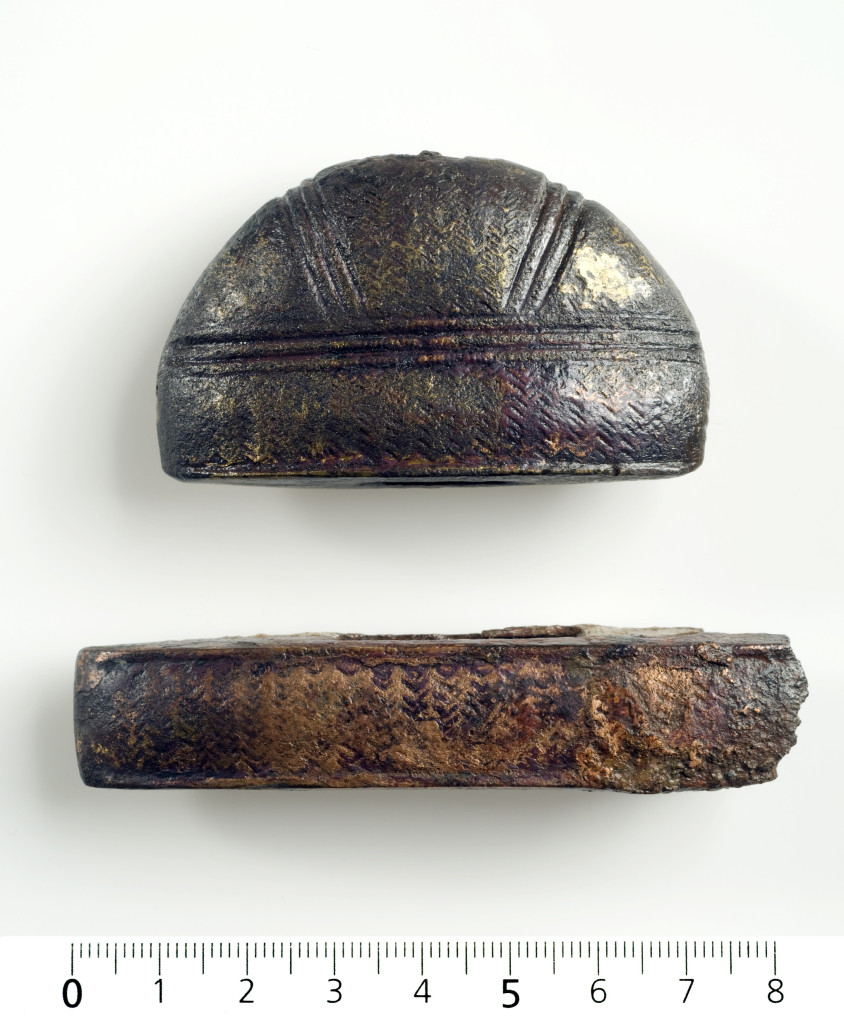 The W type hilt is always a part of the double-edged sword. Swords of this type have relatively uniform dimensions. The complete swords are 878-930 mm long, with the blade always around 745-760 mm long. The blades are 50–60 mm wide and are embedded in prepared grooves on the undersides of the guards. The blades are usually without inscriptions, although the swords from Timerevo (grave 100) has a clearly readable Latin letter C on the blade (Nedošivina 1991: 166). The guards are 80–100 mm long, 12–18 mm high and 17–22 mm thick. The preserved pommels have a length of 58–67 mm, a height of 34–37 mm and a thickness of 19–21 mm (Androščuk 2014: 79–80 and self-observation). The handles are 85–105 mm long, which corresponds to the average width of the palms and testifies to the customized production. We were only able to find four pieces with preserved handles; in three cases, the tang forming the handle is covered with wooden scales, which in the case of the sword from Breivold (T3107) is additionally coated with canvas and wound iron wire. The fourth case, the sword from Klepp (S2453), has an antler handle. As far as sheaths are concerned, they can be assumed to have taken on standard forms. The Klepp sword has a preserved wooden scabbard with a leather cover, while the Timerevo sword (grave 100) is covered with fragments of a wooden scabbard (Nedošivina 1991: Рис I.I; see the picture here). At the end of the sword from Šestovica, a copper alloy chape has been preserved. 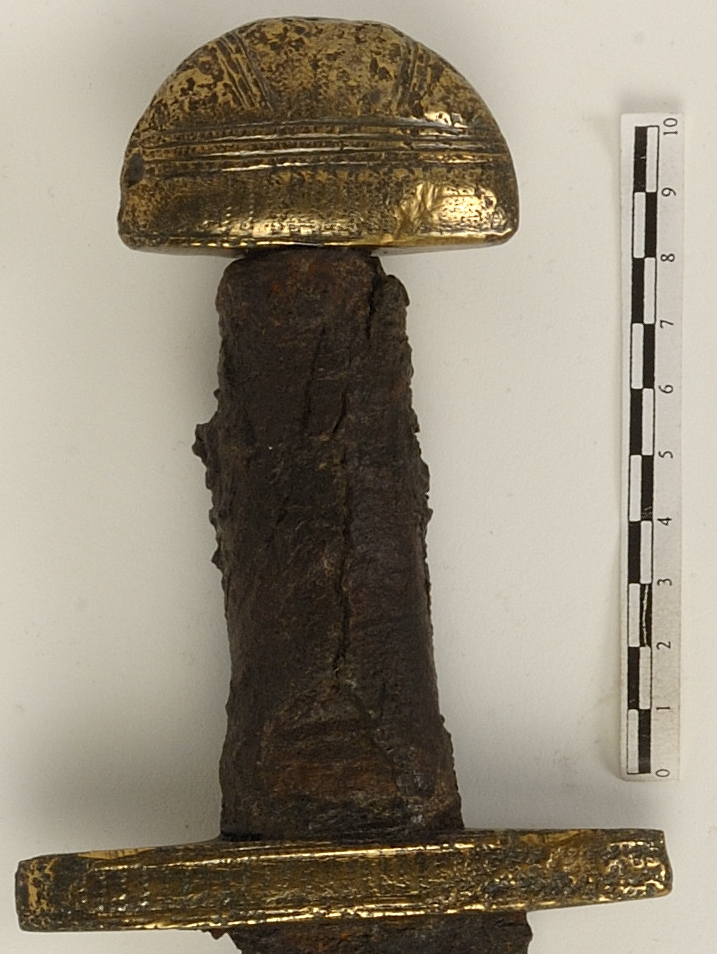 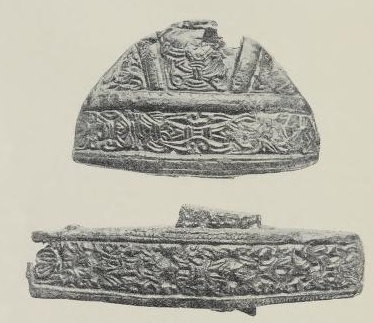 To illustrate the anatomy of this type of sword, we will show four well-preserved examples: 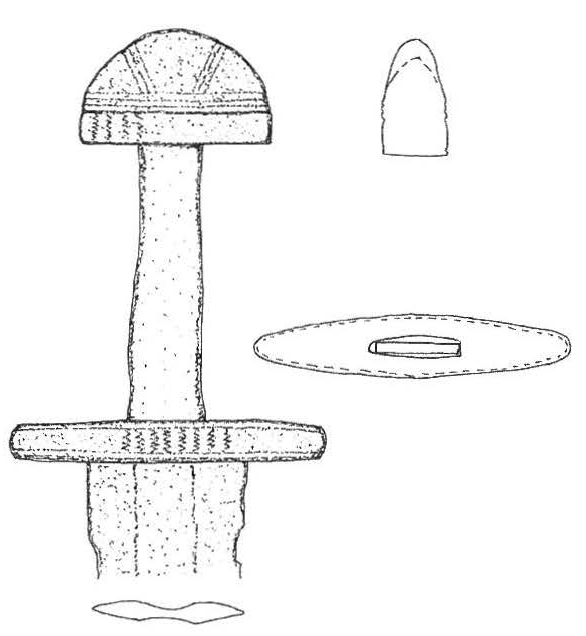 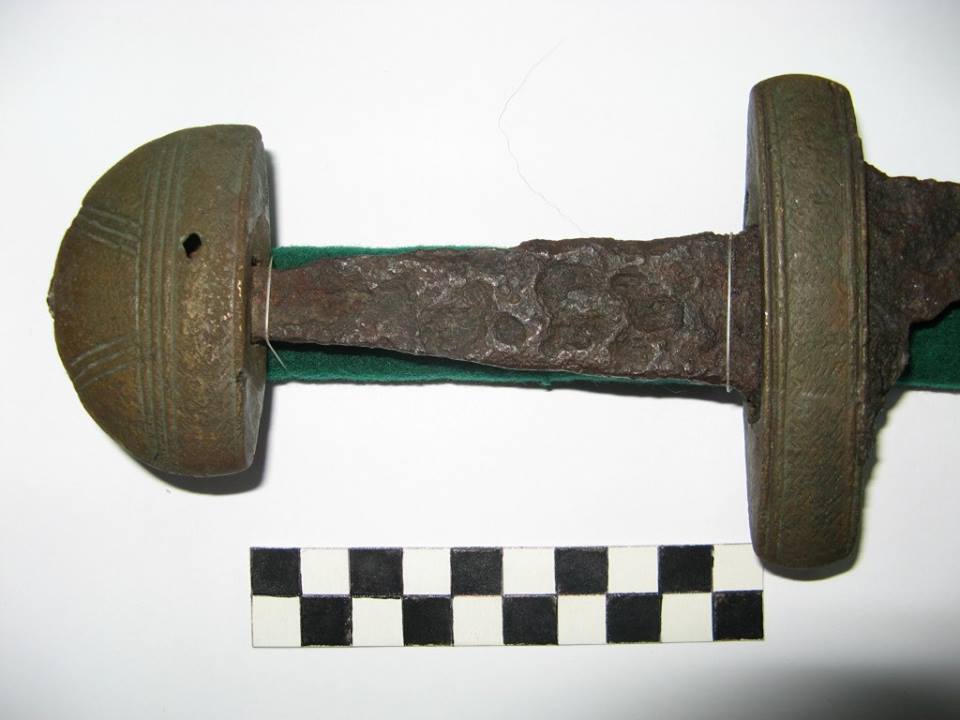 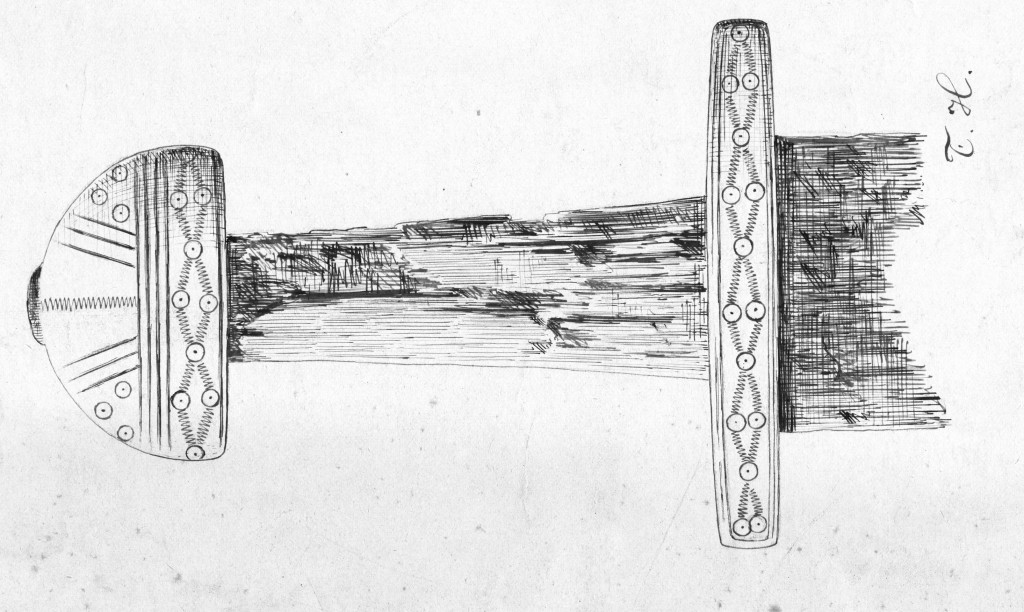 Generally speaking, the type W does not have too much representation among European swords – we currently register 18 pieces. However, distribution is interesting and deserves attention. Not surprisingly, we know the highest number from Norway. While Petersen knew 8 Norwegian W type swords (Petersen 1919: 156), Hernæs already knew nine of them and this number still seems to be current (Hernæs 1985). Only four of them have partially preserved blades, the rest being hilt components. In Sweden, we know one sword and two hilt components (Androščuk 2014: 79). We also know two components – one pommel and one guard – from the Schleswig region, Germany (Geibig 1991: Tab. 164: 4-5). There are two representatives from Timerevo, Russia (graves 100 and 287), where we find one complete sword and one fragment of the pommel (Nedošivina 1991: 166–167, Рис. I.I). We know one complete sword from the Lithuanian site Bikavėnai (Kazakevičius 1996: 64–67) and one sword from the Ukrainian Šestovica (Androščuk – Zocenko 2012: 212).

Several hybrid pieces stand very close to the W type swords and they do not fit to standard typology. First and foremost, a fragment of a two-piece pommel cast from copper alloy, found  during a settlement excavation in Pohansko, Czech Republic, in 2015, has to be mentioned (Košta et al. 2019: 215-6, Fig. 57-8). This piece is decorated with typical W type zigzag decoration. Another hybrid piece is the sword from Latvian Bēnes Kaijukrogs, which uses H/I type shape, but the components are cast in copper alloy and decorated with a zigzag pattern typical of type W (Atgāzis 2019: 90, 8. att. tab.: 1; Jērums 2012: 2. att). The third hybrid piece is a detector finding of a one-piece pommel from Ukraine, which corresponds to a typical pommel of type W, but instead of a typical decor, it is decorated with a pit decoration typical of type E (personal discussion with Sergei Kainov). Three Latvian pieces that were mapped by Artūrs Tomsons (2019: 70) could be labeled as close to W type; their shape corresponds to type V pommels, but they are cast in bronze and decorated with patterns typical for R-S types. Significantly, hybrid pieces combine elements of types that stand very close each other. The total does not include finds from the United Kingdom (Jakobsson 1992: 213; Żabiński 2007: 65), since all these swords have iron components and therefore do not meet the basic W type criterion. 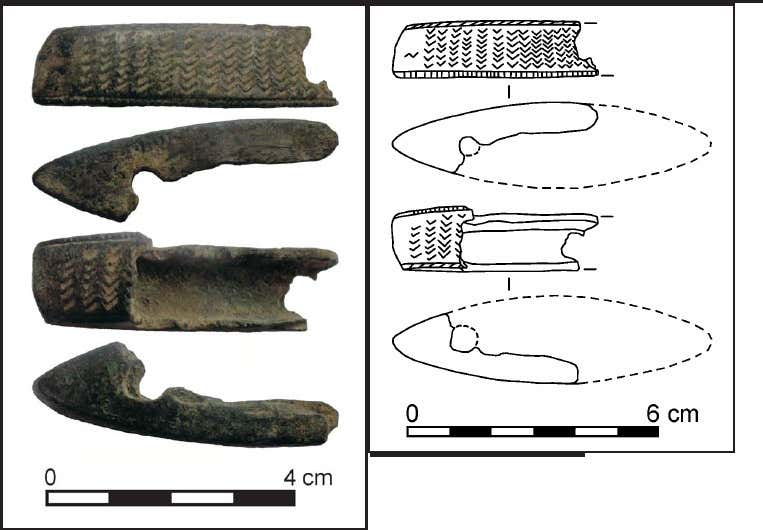 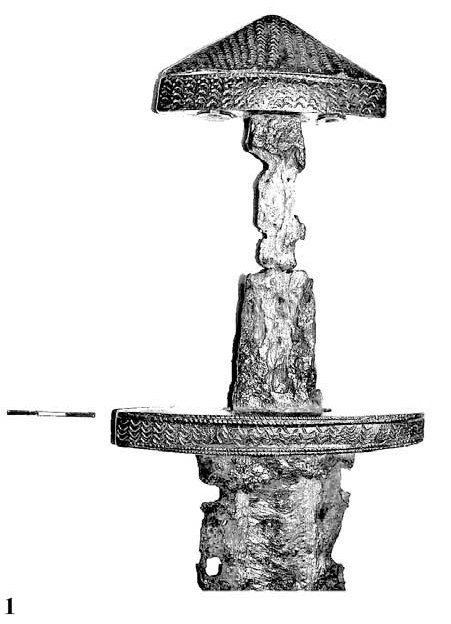 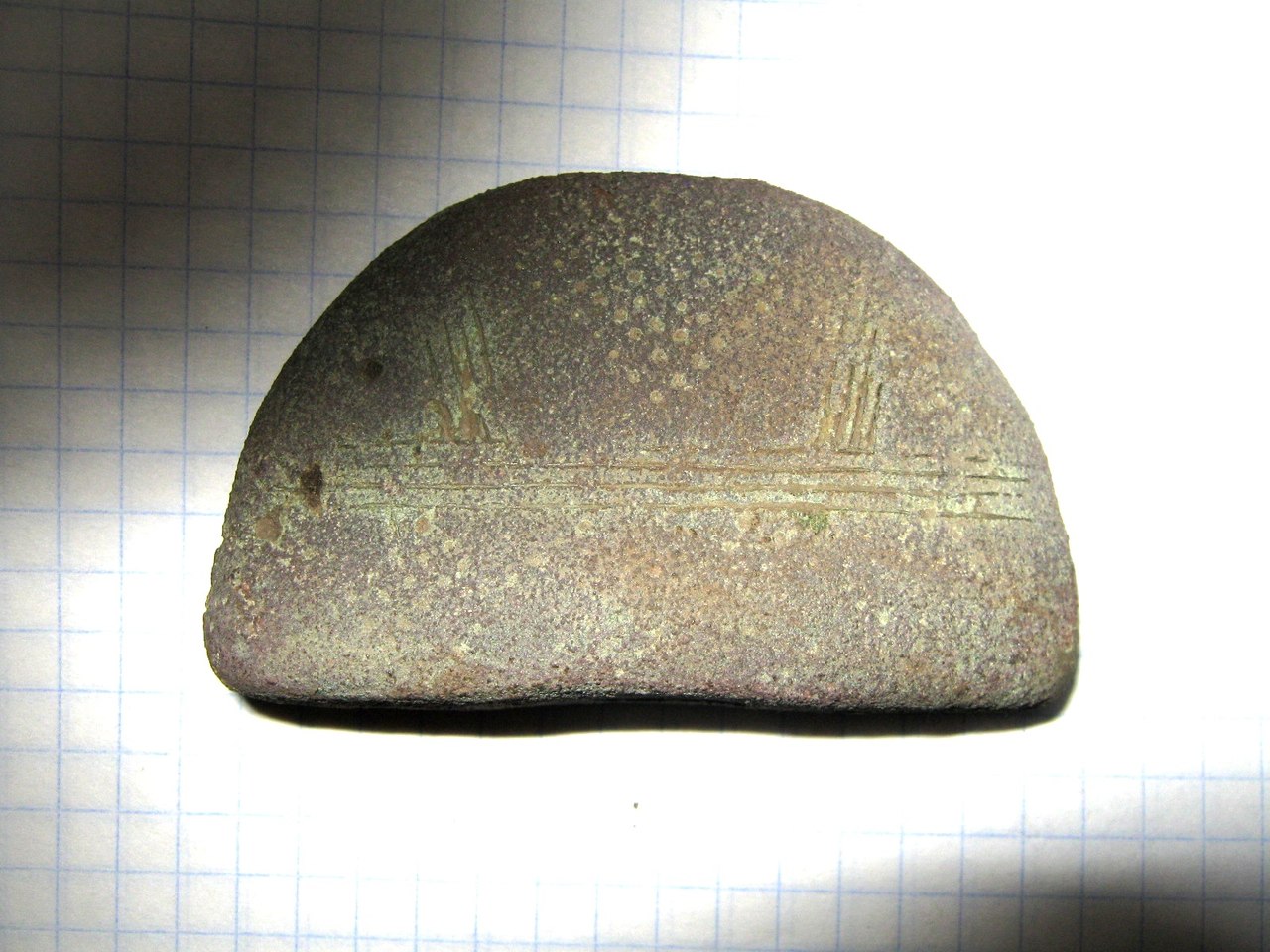 Of the total of 18 pieces, 8 are swords or fragments thereof, while the remaining 10 are separate copper alloy components. W type swords have been found in 7 countries, so they are relatively scattered compared to total numbers. The main distribution area is Northern and Eastern Europe, where swords are located in important sites. 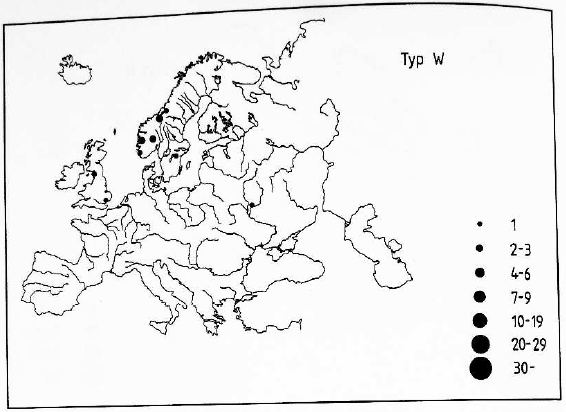 In this chapter, we would like to present five successful reconstructions of the Petersen type W made by various European swordsmiths.

Reconstruction of the sword from Šestovica 42 compared to the original.
Producer: Wojtek Szanek, 2016. 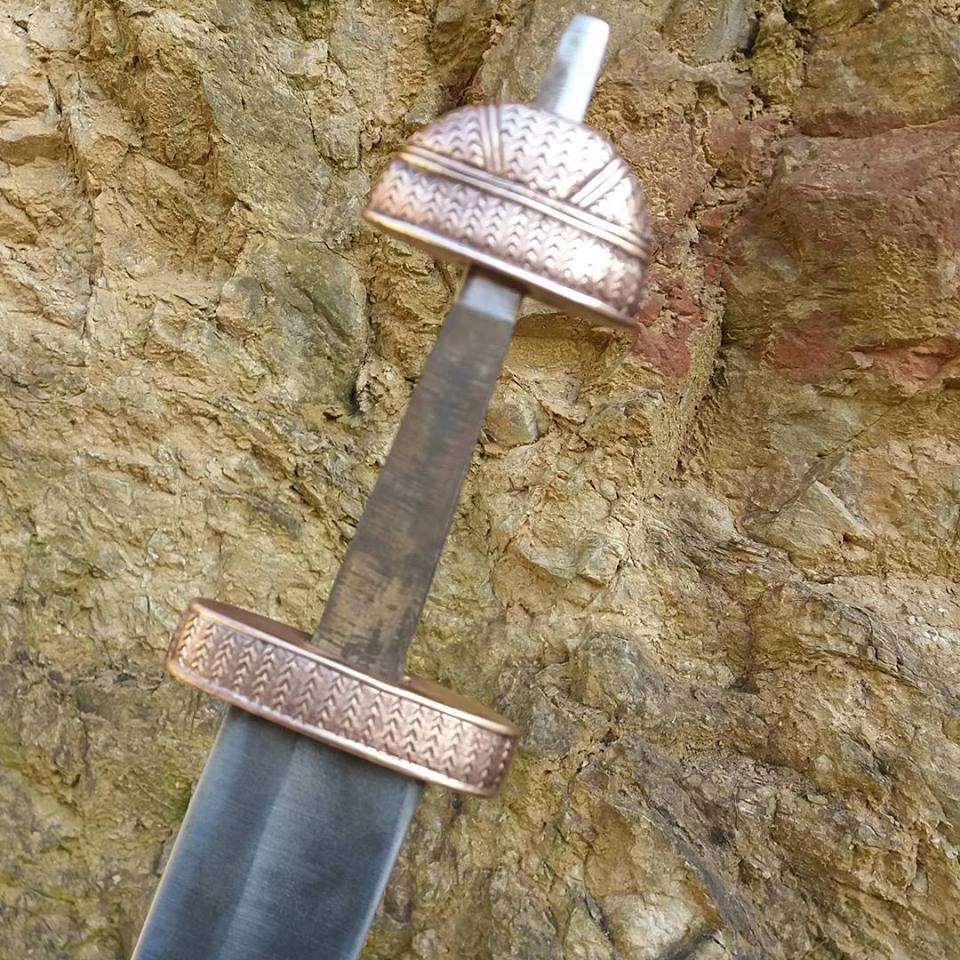 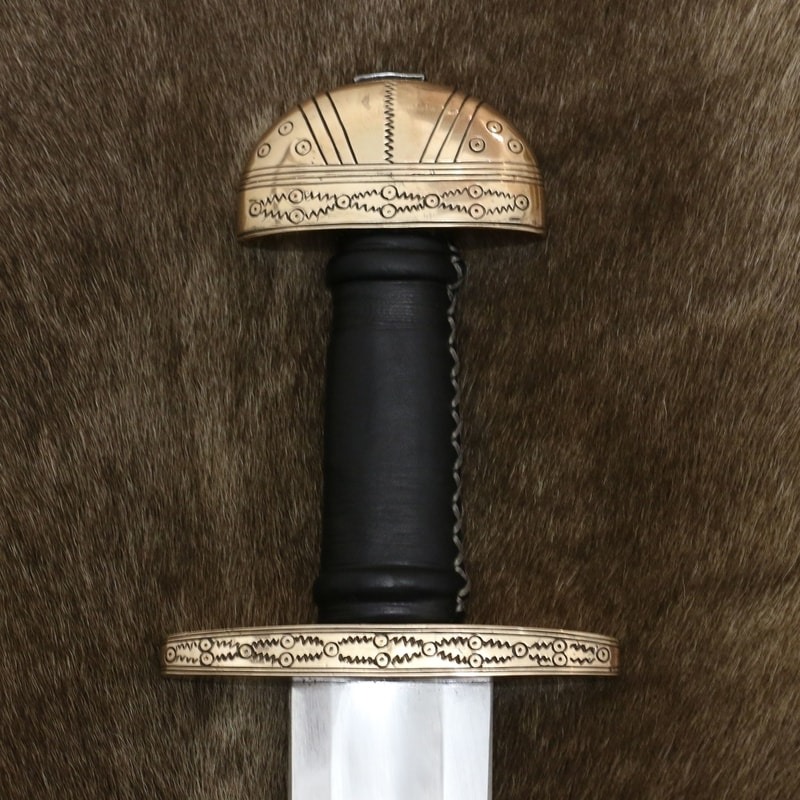 This work exists thanks to the initiative of Tomáš Břenek from the group Goryničové, who owns the reconstruction made by Tomáš Zela. Since this type has not yet been seen on the Czech battlefields, there was a need to point out the finds and their distribution. We would like to thank every persistent enthusiast who was not discouraged by waiting. Sergei Kainov, who pointed to two Russian findings, and Ferenc Tavasz, who helped me with his advice, also have their merit in the article.