For some time now, I have regularly encountered questions about what the scabbards of Early medieval single-edged swords looked like. These questions are legitimate and are related to the increased interest in the real forms of Early medieval arms, but also to the absence of literature that would discuss the problem. This topic got my attention when a great swordmaker and my friend Robert Môc asked for an article about it. I therefore give this brief overview to him in the hope that the level of knowledge will improve.

In a way, the problem can be reduced to questions about whether we know any sheaths, how they were constructed and whether the shape was symmetrical or asymmetrical. These questions can be answered with the illustrative examples of the Scandinavian, Scottish and Baltic swords, which we will show below.

The sword T 1250 from the Norwegian locality of Føinem has its almost seventy-centimeter blade covered with large remnants of a scabbard which clearly shows that the scabbard was not symmetrical and it perfectly copied the blade. The same is indicated by the sword from the Nervik (T 13482). If we accept sheaths of long knives as the closest analogies, then we should rather lean towards the asymmetrical variant, visually copying the blade (eg Olsén 1945; Stjerna 2007). However, we must not completely rule out a symmetrical variant. The methods of baldric suspension are completely unknown. 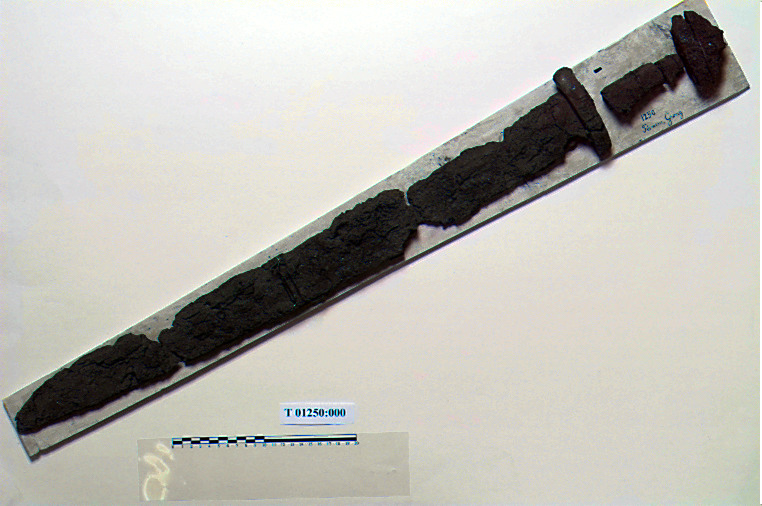 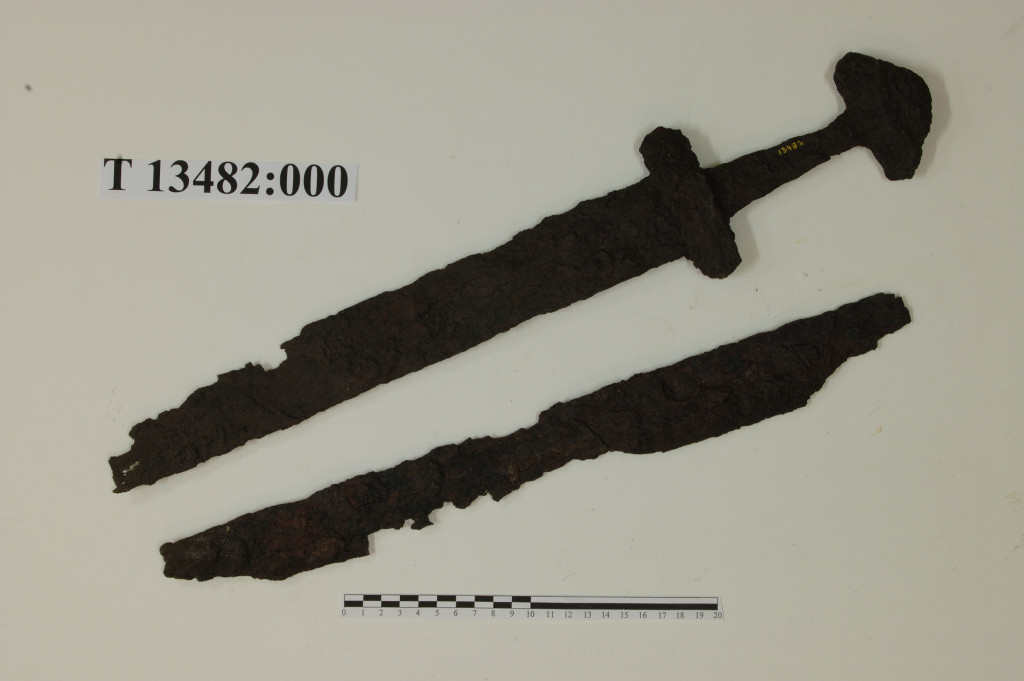 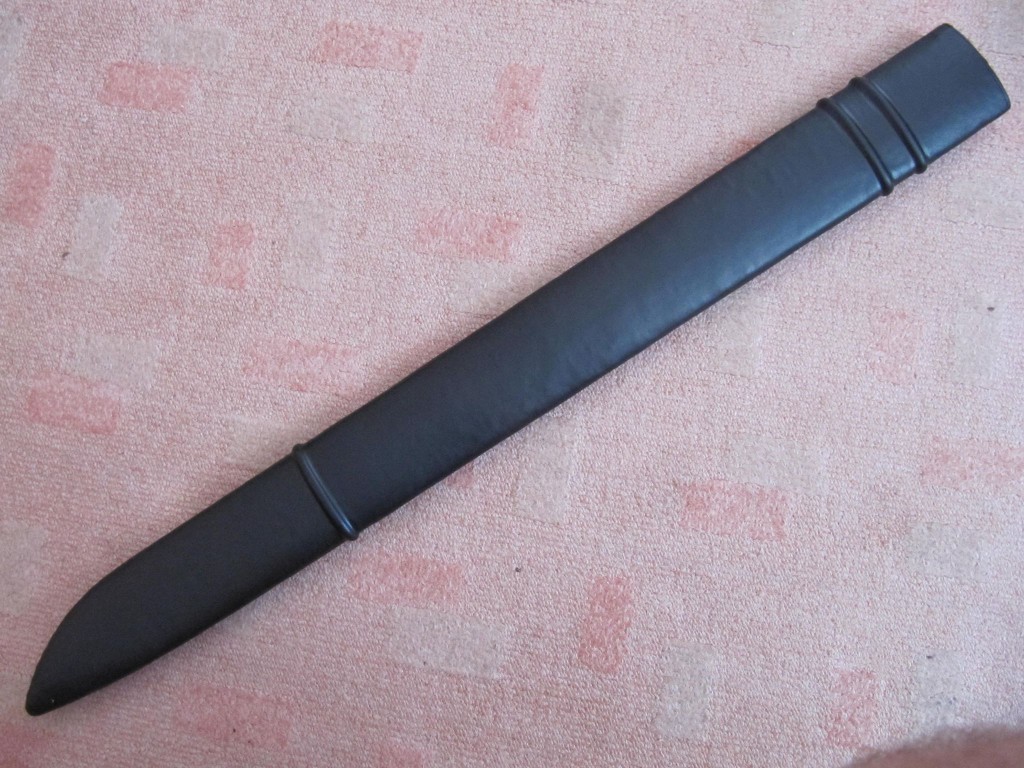 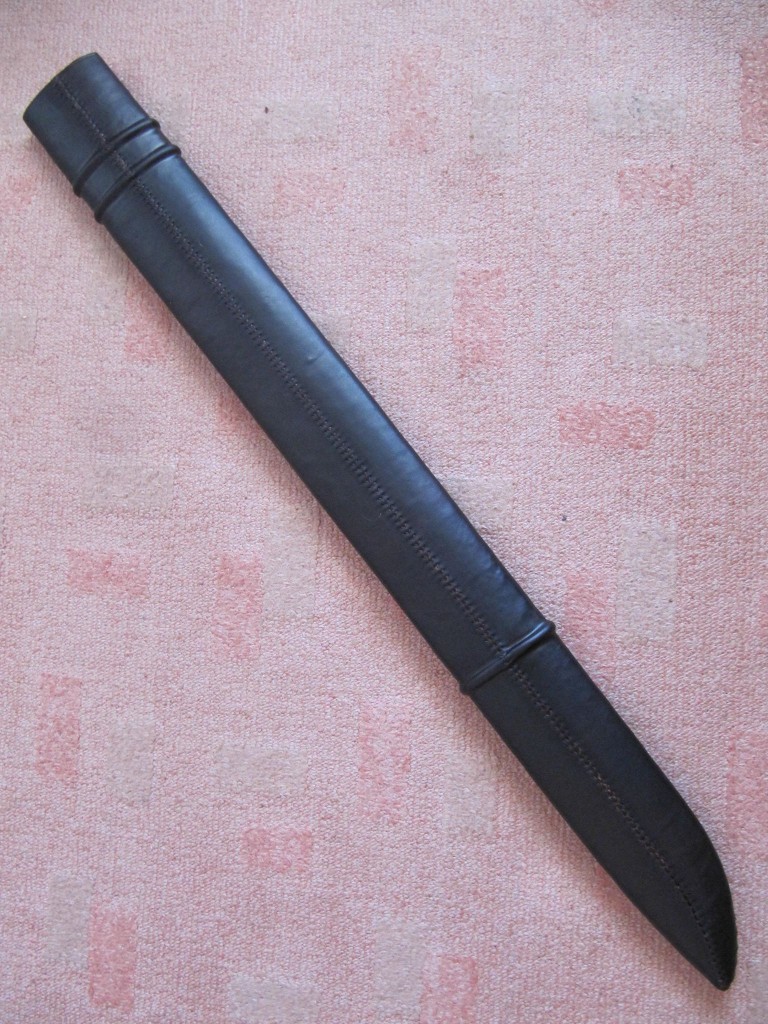 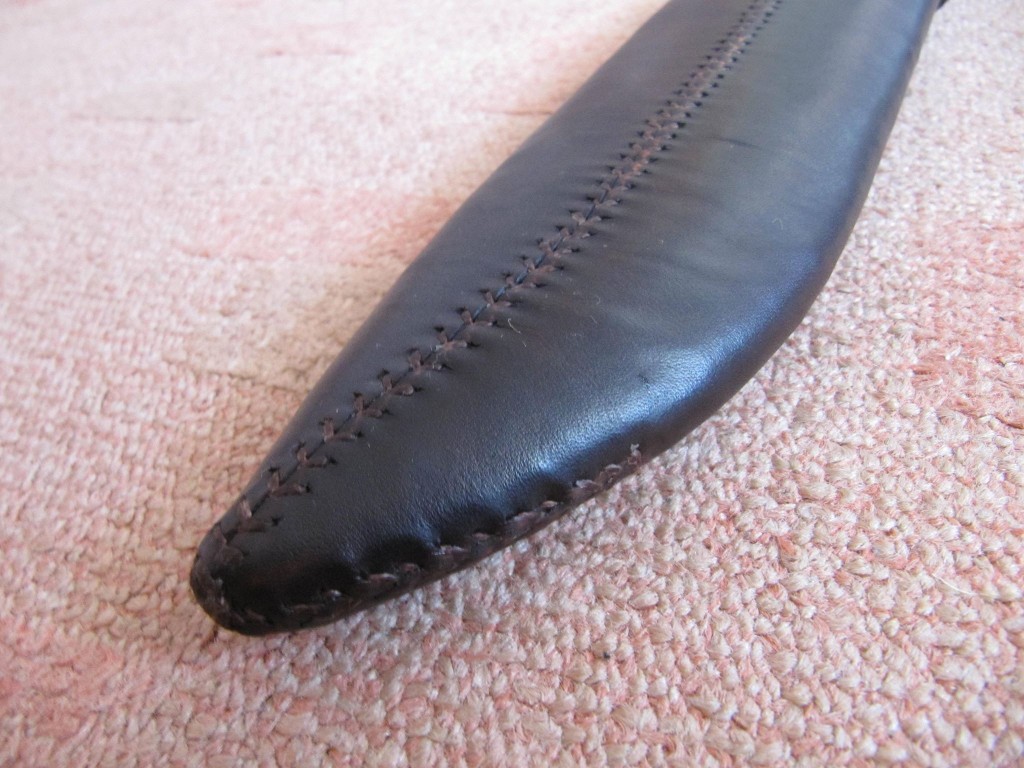 Simple scabbard of a single-edged sword. Made by King’s Craft.

In Westness, Orkney Islands, two single-edged swords with very clearly visible scabbards have been preserved (Żabiński 2007: Figs. 7-10). The swords belong to Petersen’s type H, are dated to the years 800-950 and are apparently related to the Scandinavian settlement. The first of them, found in grave no. 11, was discovered in the grave of a man aged 45-55, who was shot by four arrows. The grave consisted of stone slabs and the inventory, in addition to the sword, consisted of a shield, spear, axe, arrows, fire striker and whetstone (Żabiński 2007: 45, Figs. 7-8). The scabbard of the sword is asymmetrical, copies the blade and is covered with textile. An interesting detail is that the scabbard seems to have a cross-section of an isosceles trapezoid – on the back of the sword the scabbard is wider, it also has a flat back and narrows towards the edge.

The second sword was discovered in grave no. 12, in which a man aged 35-45 was buried (Żabiński 2007: 45, Figs. 9-10). The grave consisted of stone slabs and contained, in addition to the sword, an axe, arrows and a sickle. The scabbard of this sword appears to have been preserved without any cover. 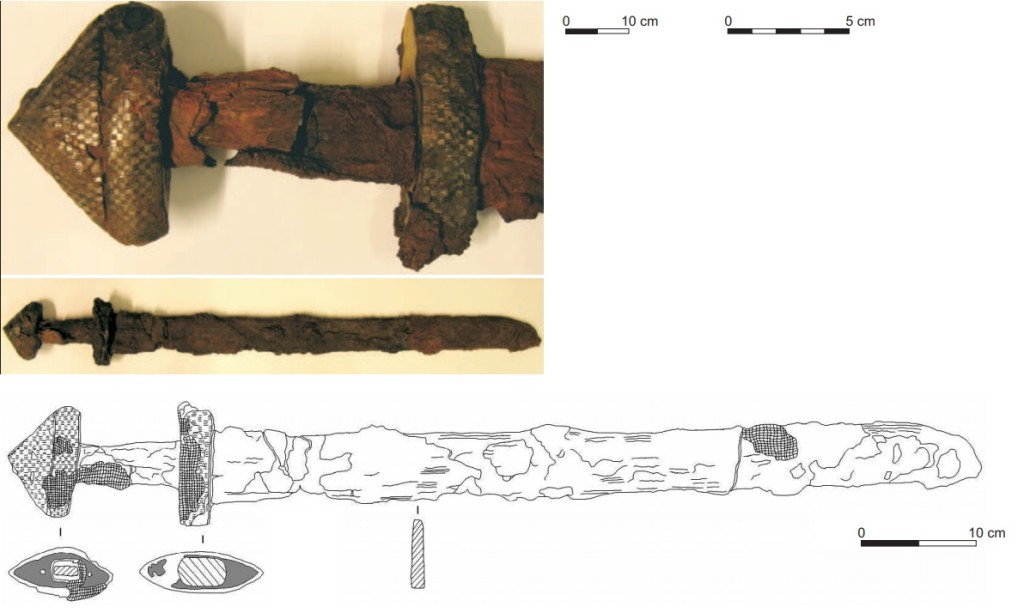 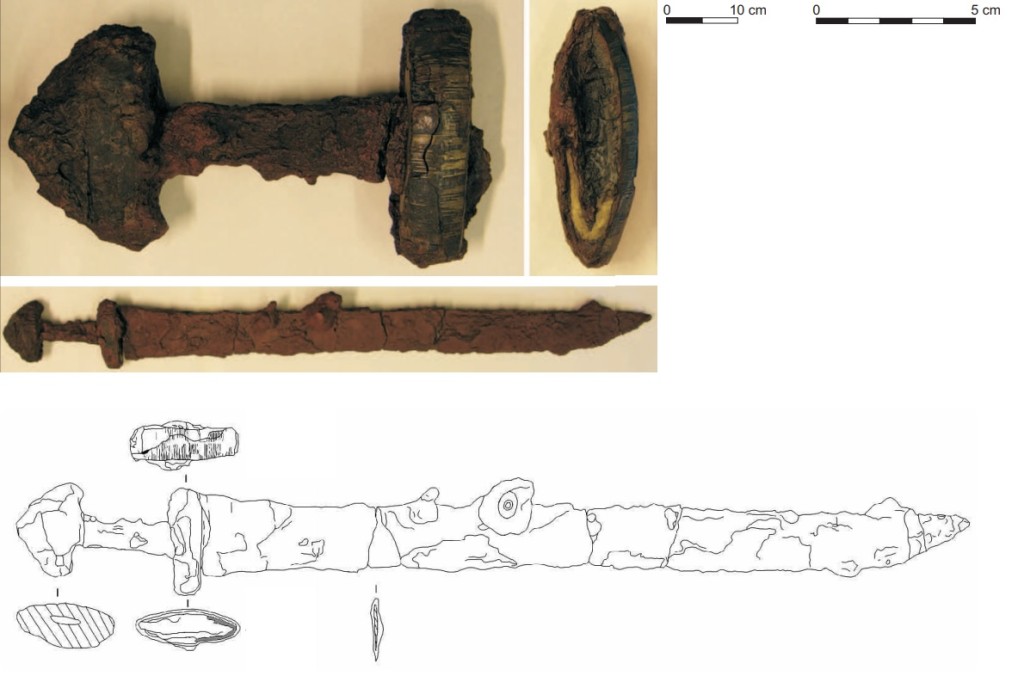 The most notable finds come from Lithuania. The sword from the grave 245 is relatively short, reminiscent of broad-knives popular in the Baltic lands. It was equipped with an asymmetrical wooden scabbard, which was decorated with bronze fittings with a two-point suspension (Kazakevičius 1981: 10 pav; Volkaitė-Kulikauskienė 1964: 3 pav; personal discussion with Evaldas Babenskas). Similar sheet metal fittings of asymmetrical sheaths, especially the chapes, have also been preserved in the grave 15 from Jurgaičiai, grave 1 from Vilkų Kampas and grave 338 from Palanga (Kazakevičius 1981: 11 pav). The Baltic narrow and broad knives that often correspond in length to shorter swords, were also equipped with asymmetrical scabbards. The single-edged sword from the grave no. 2 from was also equipped with an asymmetrical scabbard with a point wrapped in a strap or string Nikėlai (Volkaitė-Kulikauskienė 1964: 8 pav; Kazakevičius 1996: 106).

As for symmetrical scabbards, the grave 199 of Palanga contained a narrow sword with an antenna-shaped pommel that was placed in a symmetrical wooden scabbard, which was decorated with a symmetrical metal chape (Kazakevičius 1996: 101, pav. 6). The scabbard is attached at two points by chains that have been attached to strap-divider of the belt.

The short sword from the grave 245 from Palanga. Archive of Evaldas Babenskas. 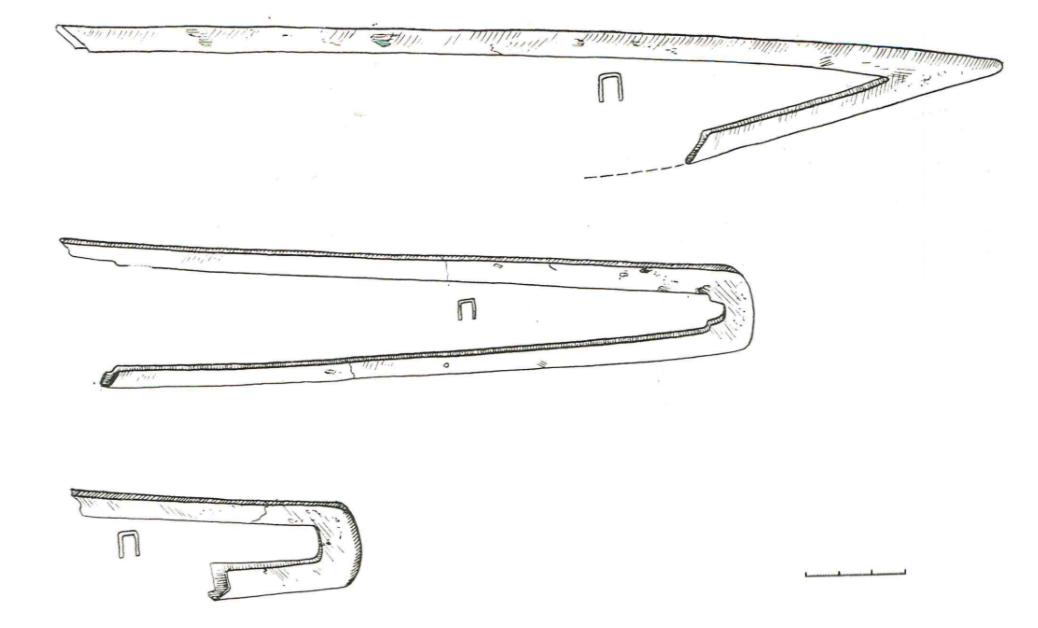 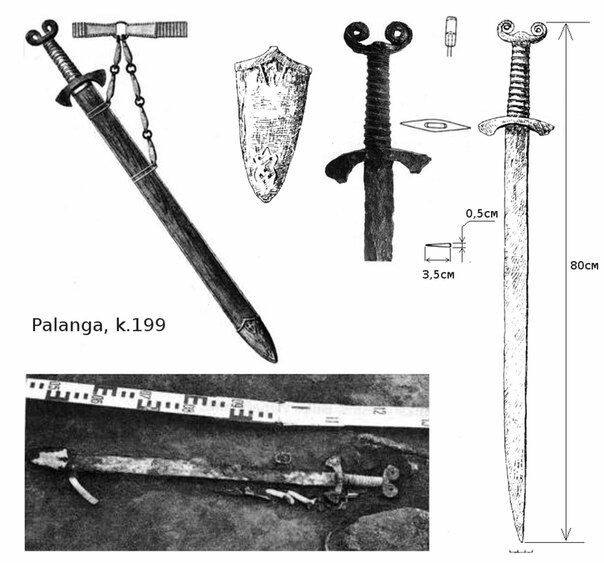 If we were to summarize these materials, then we can state that the scabbards of single-edged swords are known, although they are preserved in different ways in different countries. In the regions, traditional materials and processes were used for production, so the Scandinavian and Scottish scabbards combined the wood core with a leather and / or textile lining or leather and / or textile cover, while the Baltic scabbards also had bronze fittings. The Baltic scabbards are usually preserved without any cover. The used wood was thin, about 4-6 mm. The cross-section appears to be trapezoidal or lenticular, as with the scabbards of double-edged swords.

The Scandinavian and Scottish scabbards of single-edged swords appear to be asymmetrical. A symmetrical scabbard can be found only in Lithuania, with a sword that has a very narrow blade compared to most Scandinavian specimens. While we know the suspension systems of Baltic scabbards, we do not record a single example for Scandinavian ones.

Sjøvold, Thorleif (1974). The Iron Age settlement of artic Norway : a study in the expansion of European Iron Age culture within the arctic circle, Tromsø.