When the long-awaited and well-illustrated monograph “Břeclav – Pohansko. X., Sídelní areál na Severovýchodním předhradí : archeologické výzkumy v letech 2008-2016” from Professor Macháček and his team (Macháček et al. 2021) was presented at the end of September 2021, this book began to spread not only among academics but also across reenactor communities, which appreciated especially everyday objects and weapons, quality of illustrations and text descriptions.

A friend and colleague reenactor Roman Král soon drew my attention to a fragment which I myself overlooked and which is listed in the book as an unrecognized “plate” (inv. no. P300446). It was a remnant of the characteristic circumferential band of the Stromovka type helmet with numerous rivets and a serrated holder of the mail aventail. The discovery of any early medieval helmet is rare in Europe, which is why I immediately informed the authors of the book, Jiří Macháček and Petr Dresler, who admitted our interpretation and invited us to a personal inspection in Pohansko. Miloš Bernart also joined our expedition, who in the past used to deal with defensive elements of 9th-11th century and had the opportunity to personally inspect the helmets from Stromovka (see Bernart 2010). Thanks to Miloš, a second fragment was recognized in the book (inv. no. P292730), listed as “decorative fitting” (Macháček et al. 2021: 160), most likely originally coming from the same helmet.

The personal examination of both fragments took place on Friday, October 1, 2021, in the presence of employees Petr Dresler and Pavel Čáp, who kindly received us and willingly made available to us all the finds we were interested in. The photos were taken by Miloš Bernart, I was personally responsible for recording the metric data, while Roman Král compared the fragments with his reproduction of the helmet. There was no doubt that these were the remains of a helmet.

The text below is created with the permission of the authors of the book, and together with Professor Macháček we plan to publish fragments in print in a more professional way and with X-rays.

Position of Pohansko fort on the map of the Europe.

Both fragments were found during archaeological excavations in the Northeast suburb of Pohansko in 2015. One of them (P300446) came from the building 238 (Macháček et al. 2021: 440, 670), the other was found in the adjacent square B56–48 (Macháček et al. al. 2021: 161-1). The distance between the two finds was at most lower units of meters, and therefore it can be assumed that they originally belonged to the same product. At least ten rings were also discovered in the building 238, but the interpretation as mail aventail is debatable due to their large diameter; part of the rings was secondarily modified to a pendant, which does not suggest this use. 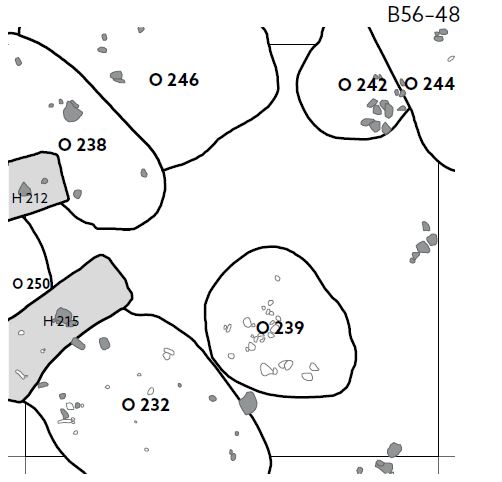 The dating of both fragments is identical to the dating of the entire suburb, which dates from the end of the 9th to the first half of the 10th century (Macháček et al. 2021: 138-140). In other words, the helmet belongs to the late Great Moravian or After Great Moravian horizon, which applies to all helmets from this group (Vlasatý manuscipt). 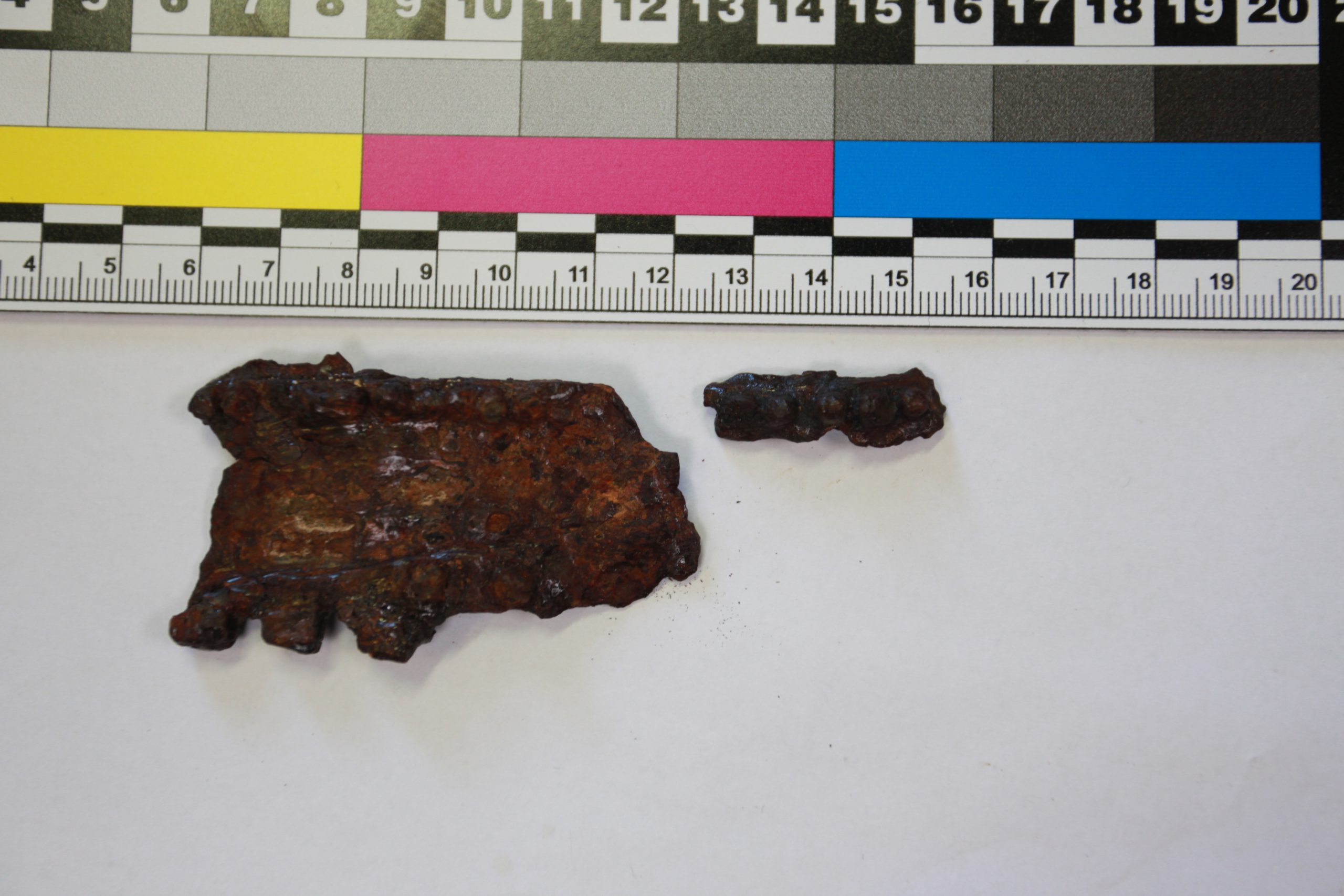 Photographs of both fragments. The photo was taken by Miloš Bernart. 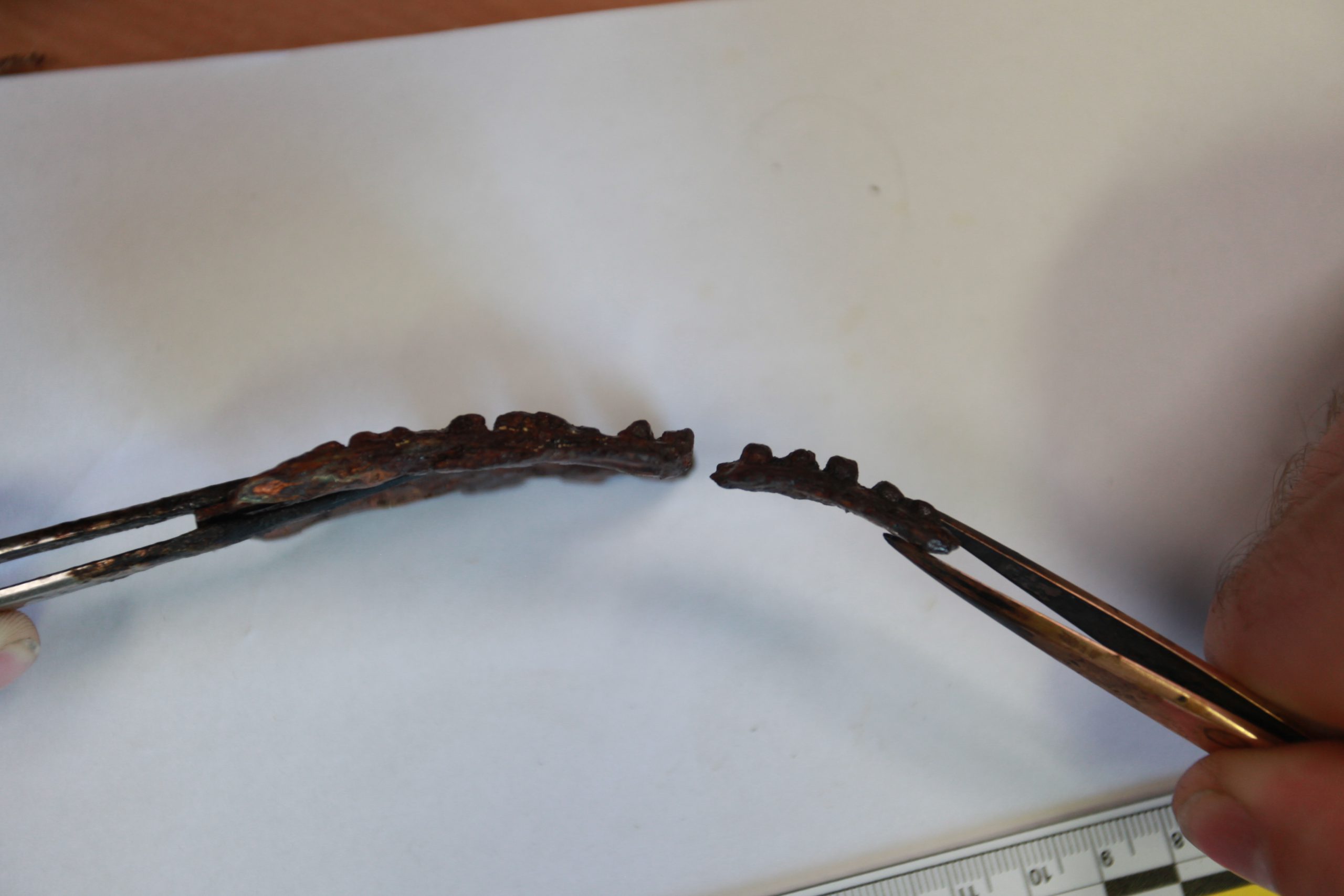 Photograph of both fragments from the top view, which indicates the curvature of the original helmet.
The photo was taken by Miloš Bernart.

On the underside of the circumferential band, a double-sided aventail holder with three preserved teeth is attached (the fourth tooth is fragmentary). The height of the holder on the inner part is 14.72 mm, on the front maximum 14.15 mm. The teeth are 6.7-7.6 mm wide, while the holes between them are 3.9 mm wide and 3.7-4.7 mm high. The edge of the circumferential band is aligned with the upper edge of the holes between the teeth. The teeth have a flattened U-shape from the side view and are not visibly filled with wire. The thickness of the aventail holder over the teeth is 4.8-5.7 mm. The holder is attached with two rivets, one of which has a head with a diameter of 5.4 mm. The rivets appear to be set less densely than the connection of the circumferential band and the dome. 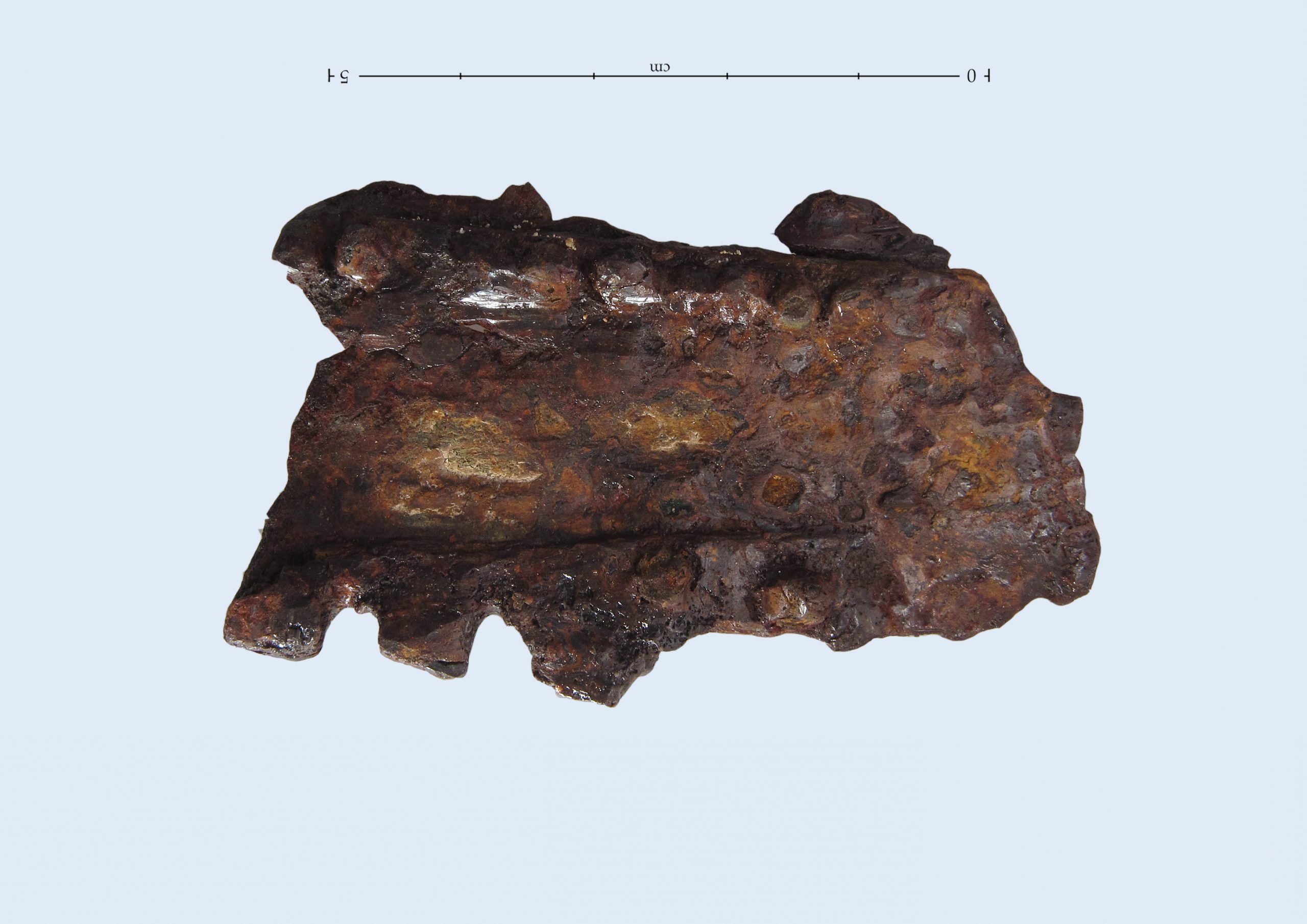 Photo of the fragment P300446. The photograph was kindly lent by Jiří Macháček. 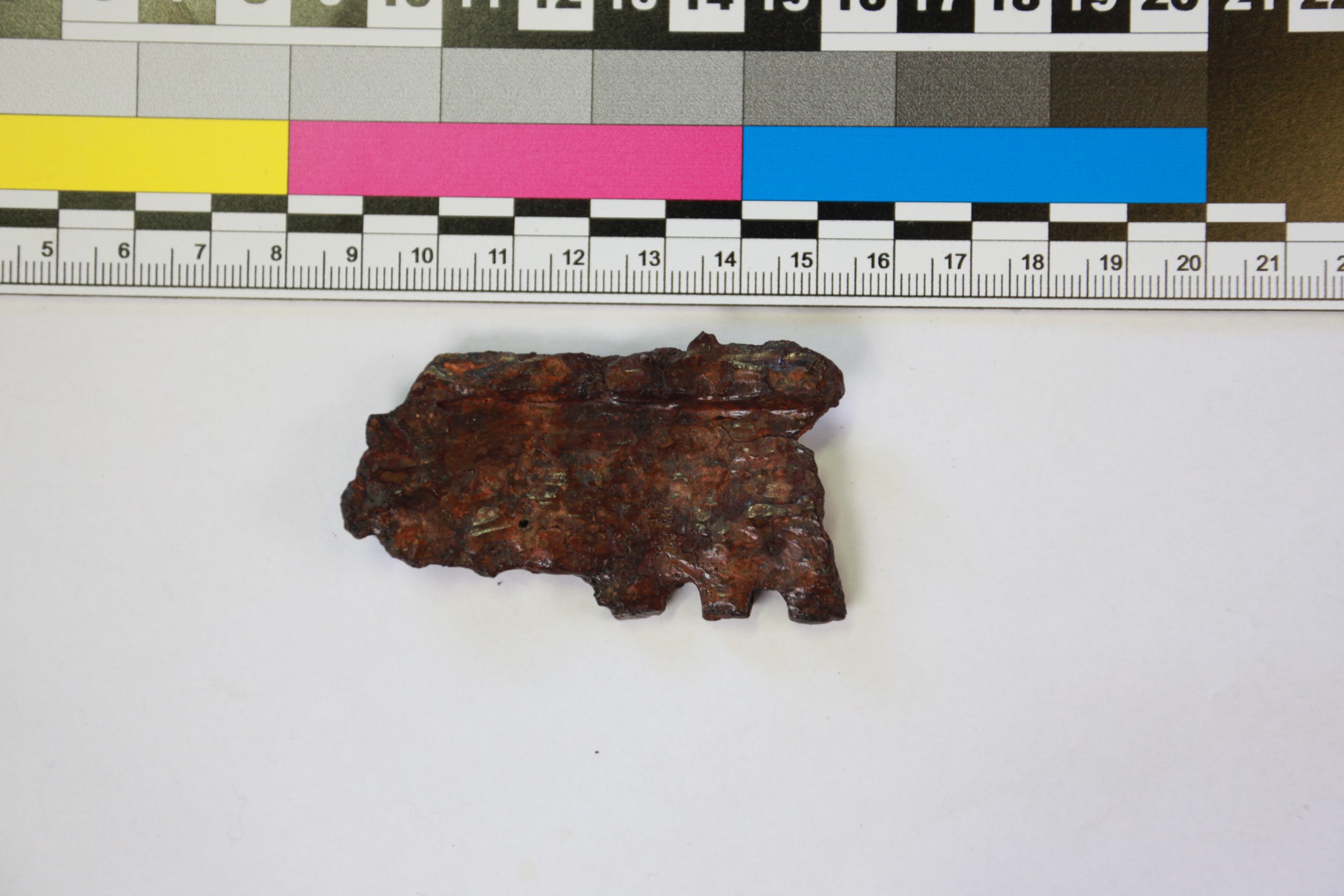 Photo of the back side of the fragment P300446. The photo was taken by Miloš Bernart. 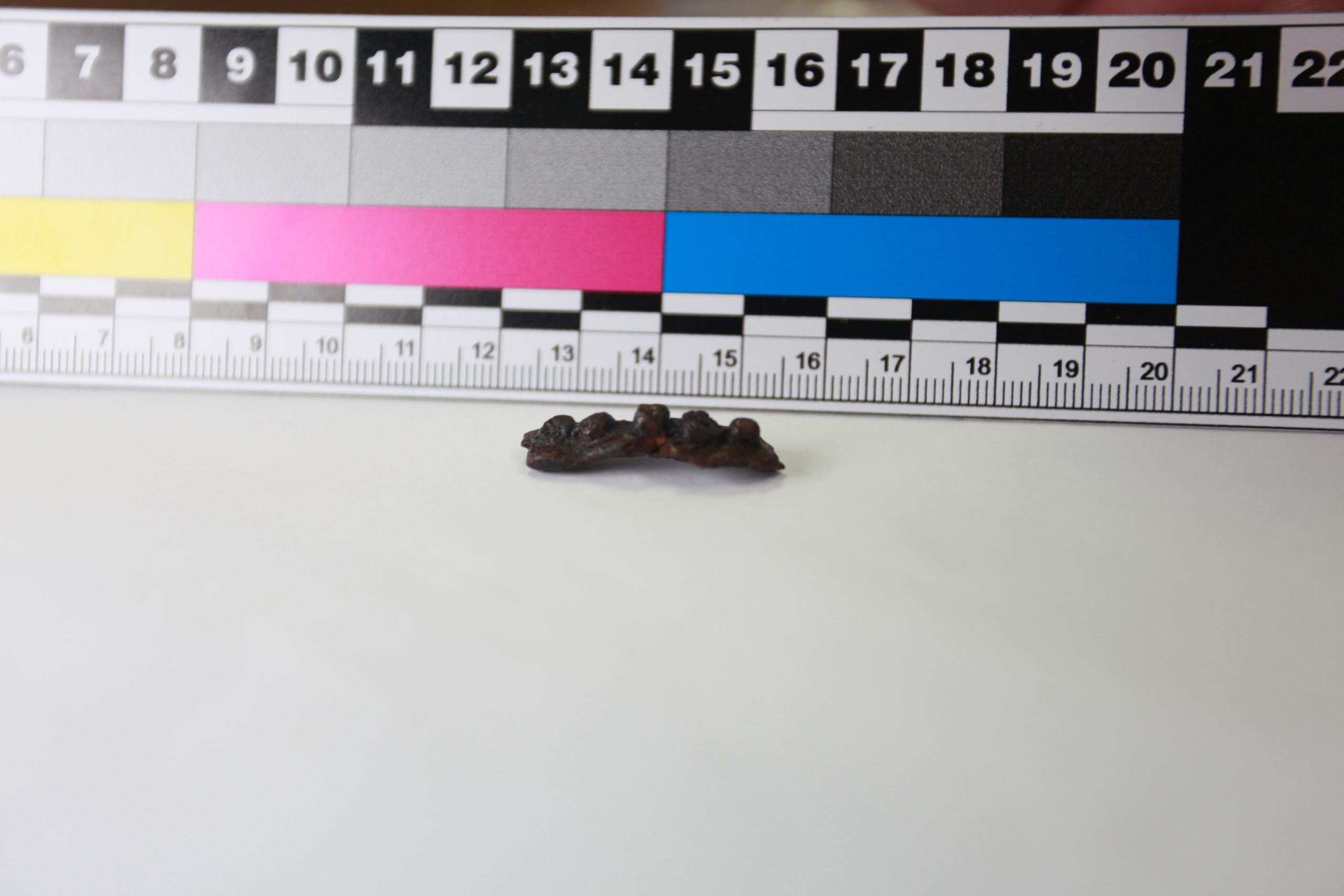 Photo of the fragment P292730. The photo was taken by Miloš Bernart.

A helmet that appears to be intentionally broken before storage can be easily assigned to the Stromovka type. Although we do not know its complete look, some aspects of the available fragments can be commented on.

Due to the construction of the aventail holder and numerous rivets used to connect the circumferential band and the dome, both helmets from Stromovka (Hejdová 1964: 49-54), the helmet from Gnězdovo (Kainov 2019: 189-191, Рис. 71) and the helmet from Bojná (Pieta 2015: 27-30, Fig. 17.1-2) appear to be the closest analogies, but not a reduced variant from the Kozel archive (Macků – Pilná 2021). The height of the aventail holder varying between 14-15 mm is essentially identical to the finds from Gnězdovo (15 mm) and Stromovka (14 mm) – we can add that the height of the holders without teeth usually corresponds to the height of the arms of the nasal. The thickness of the sheet of the Pohansko find corresponds to the thicknesses of other measurable pieces, for example, the helmet from Kozel has a thickness of 1-1.9 mm. 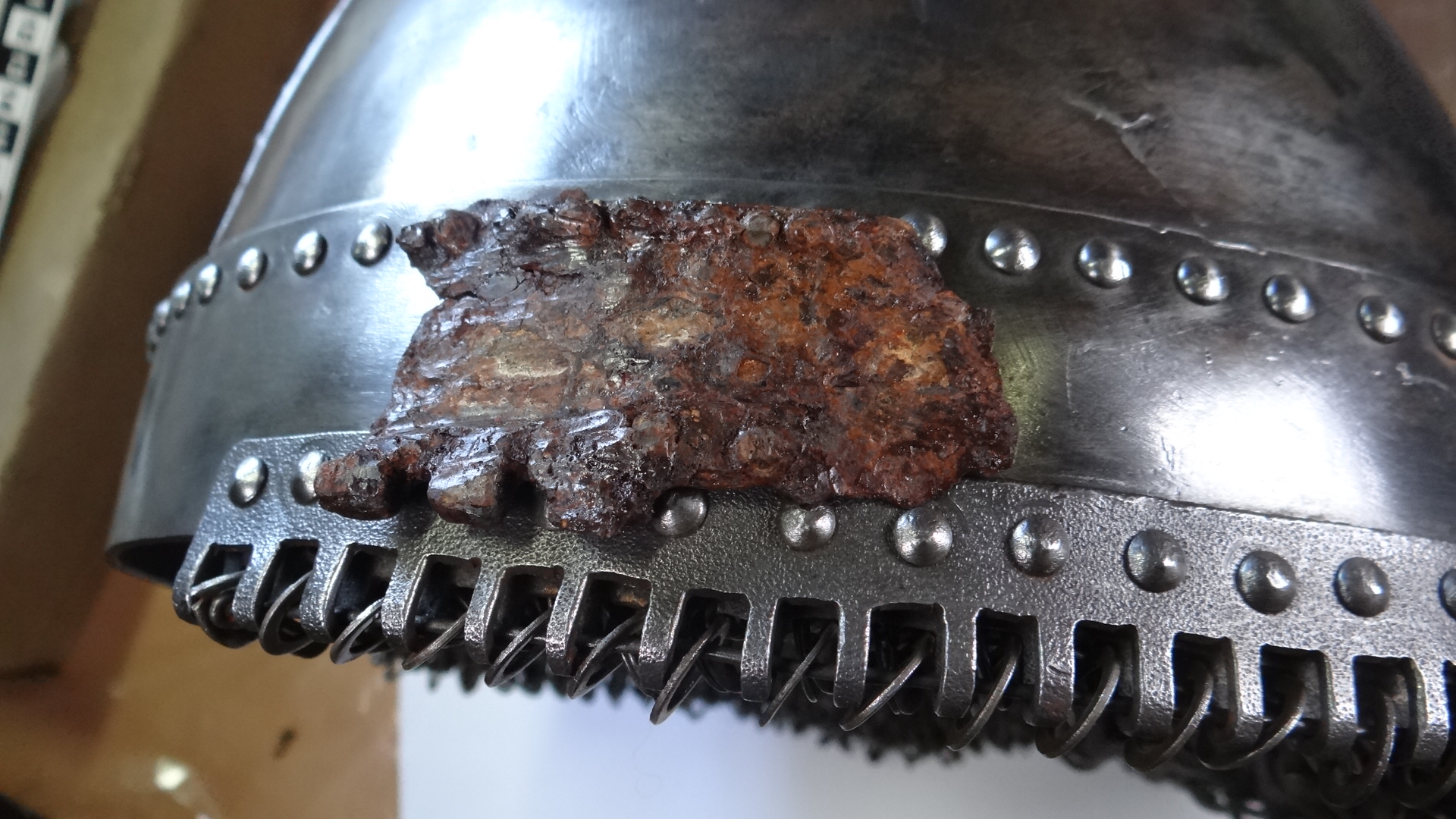 Photo of the fragment P300446 compared to a reproduction of a helmet. 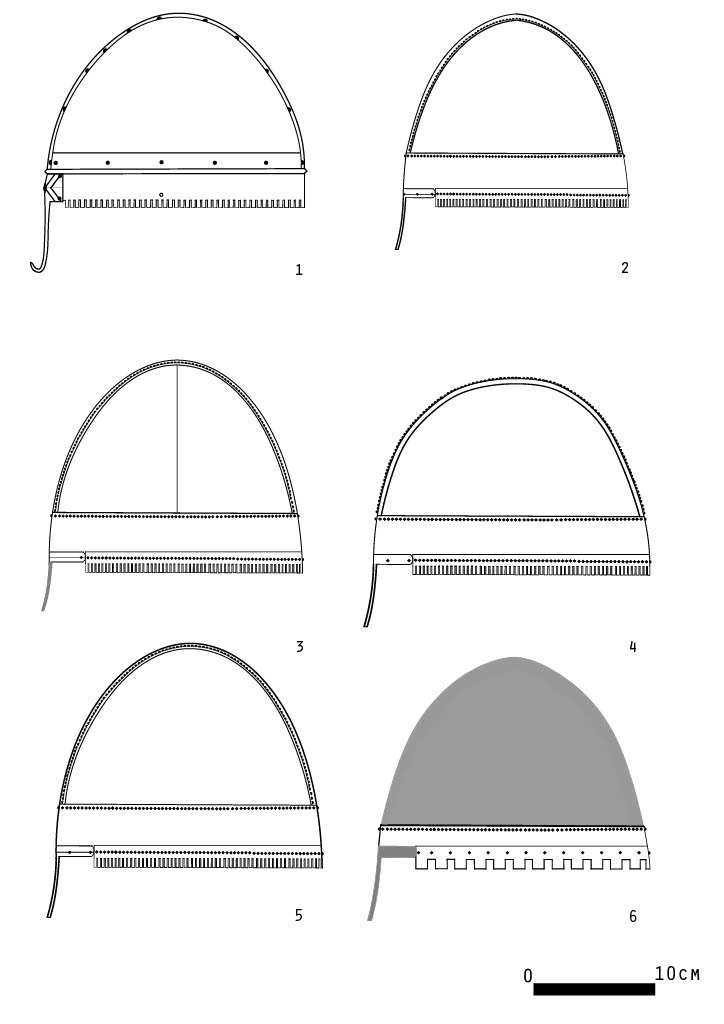 Not only that this find extends the body of helmets of 9th-12th century in the Czech Republic from 8 to 9, but above all it is the first helmet from the Moravian territory, which can probably be associated with the period of Great Moravia. So far, the only potential Great Moravian helmet we had at our disposal was a helmet from Bojná, Slovakia, belonging to the same group. Both of these helmets clearly indicate that drawings and other reconstructions of Great Moravian fighters should prefer the Stromovka helmet group, not multi-segment nasal-less helmets with a socket (eg Galuška 1991: 57).

The find from Pohansko confirms the dating to the last third of the 9th and 1st half of the 10th century, which was suggested before the recognition of this helmet (Vlasatý manuscipt). In addition, the recognition emphasizes the importance of literature that contains quality illustrations, drawings and descriptions. We must also underline the role of informed reenactors who, thanks to their practical focus, are able to recognize some important finds.

The final remark that must be made relates to the number of Stromovka helmets in Central Europe. This is the fifth example in the territory of the former Czechoslovakia, while two finds have been made in the last 12 months. Certainly there must be other unspecified fragments of these helmets in the Czech, Slovak and Austrian archives, and I appeal to all academics in charge of the Great Moravian localities in these countries to carry out a thorough revision. 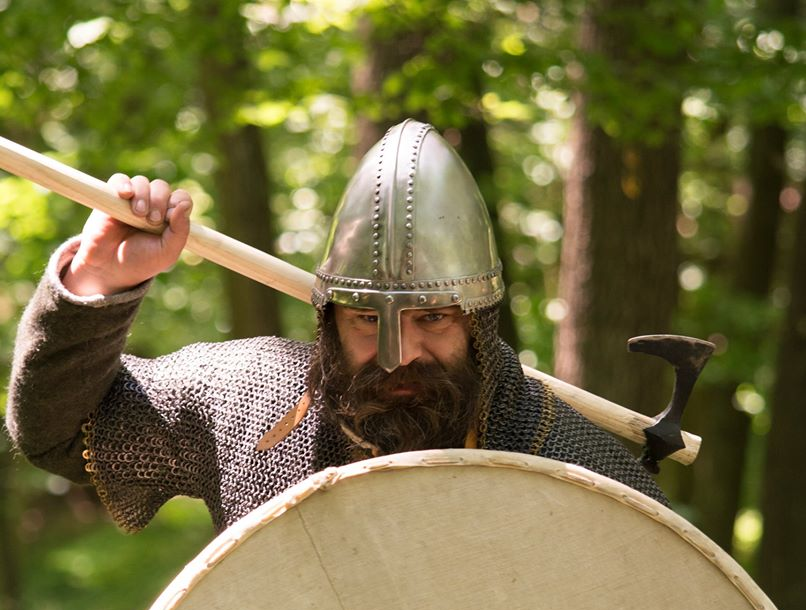 My warm thanks go to Jiří Macháček and Petr Dresler, without whose quality book and willing approach this important discovery could not happen. I would also like to thank Mr. Čáp for his hospitality at the archeological base in Pohansko. I am very grateful to my friends Roman Král and Miloš Bernart, who helped to identify the finds and participated in the documentation, during which we had a lot of fun. Lastly, I would like to thank to Pavel Macků for the opportunity to share the picture of the helmet from the Kozel deposit, which is currently in the process of publication.