Several iconographic sources from the area of modern France, England, Denmark, Spain, Switzerland and Germany, dating to the 11th and 12th centuries, depict an interesting way of wearing swords in combination with chainmail armour. In contrast to belting the armor with a sword belt, which can be seen relatively commonly in 12th and 13th century depictions and which is usually reproduced today, the scabbard with the belt is located under the armour, in which a small hole the size of the scabbard mouth is formed on the side. The sword is inserted from the outside. Due to the absence of literature, I decided to make this problem visible.

This method of carrying the sword is shown by at least 17 iconographic sources. The following is a list of them: 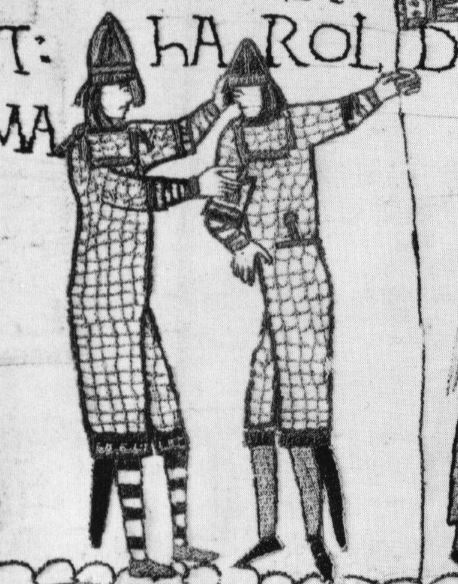 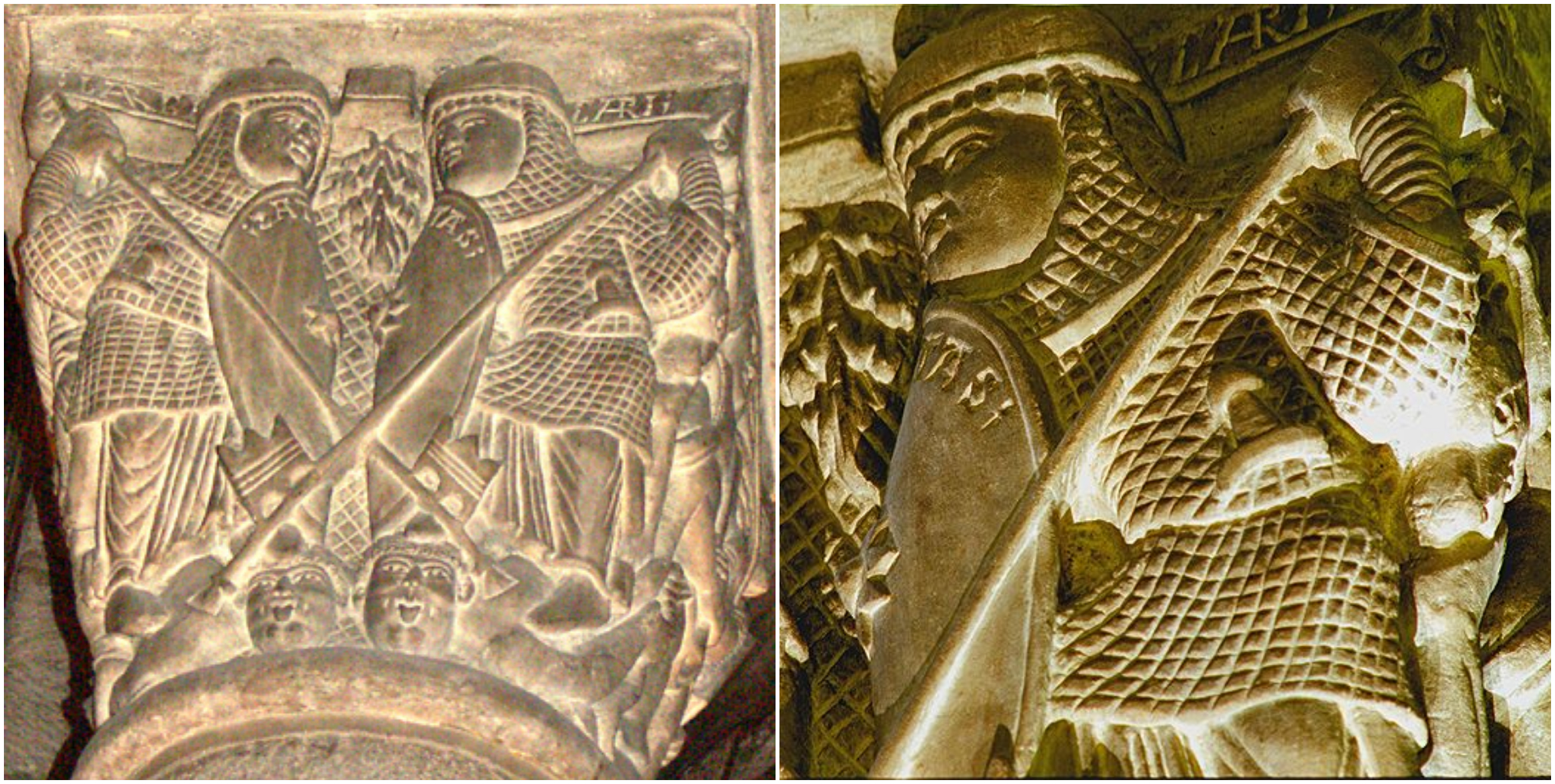 Column head in the Basilica of Our Lady in Clermont-Ferrand, 12th century, present-day France.
Jalladeau 2009; Pierre 2005. 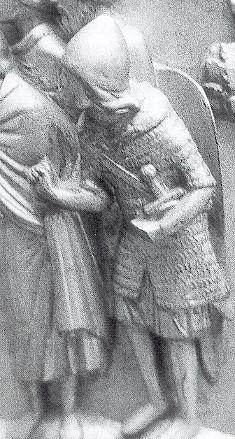 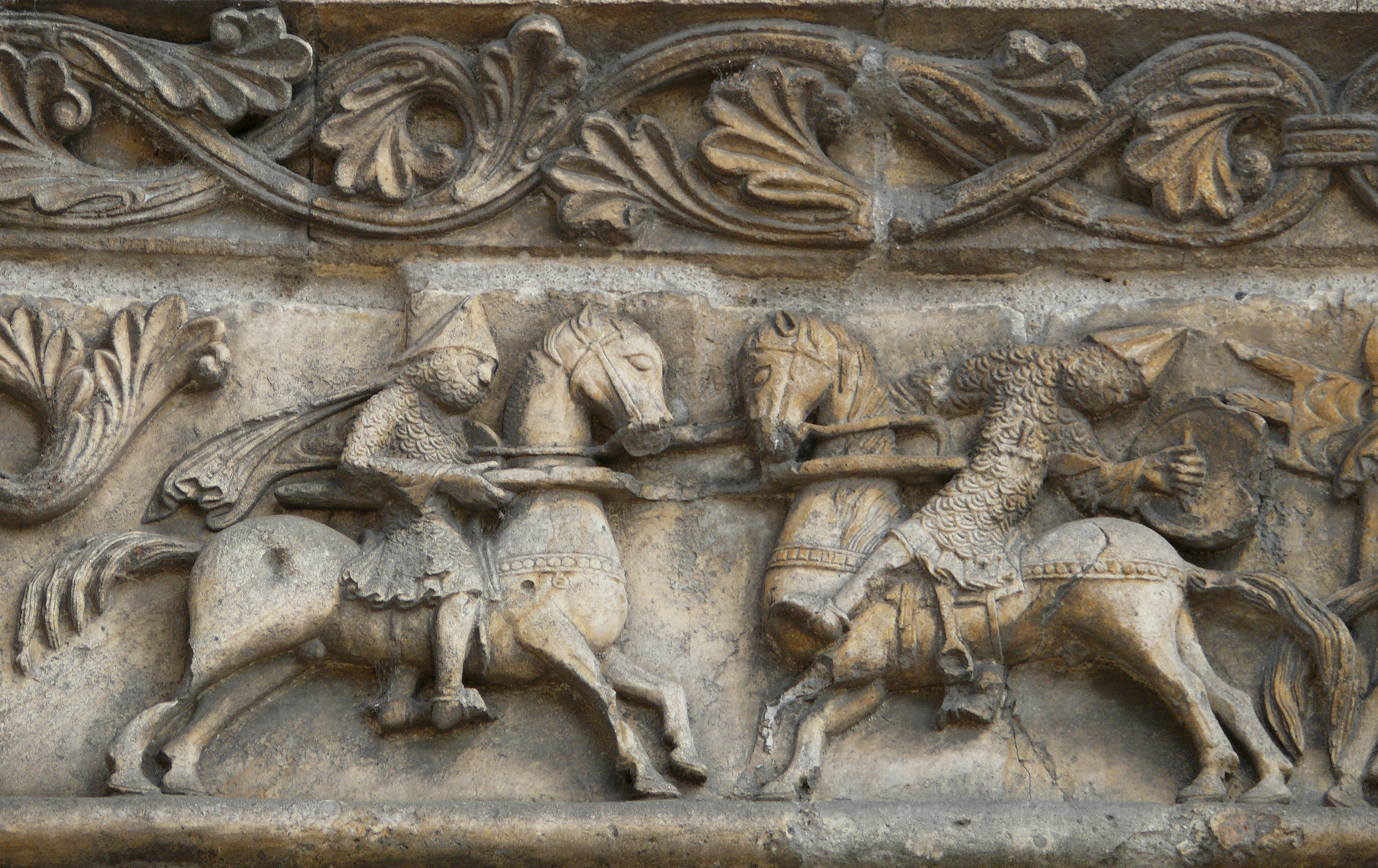 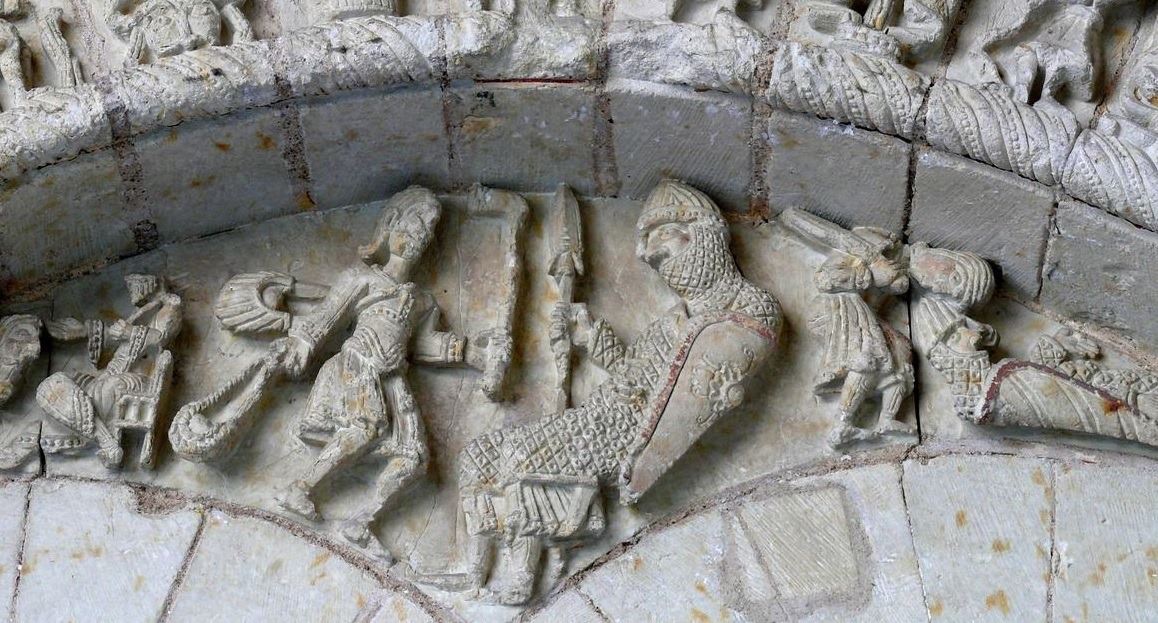 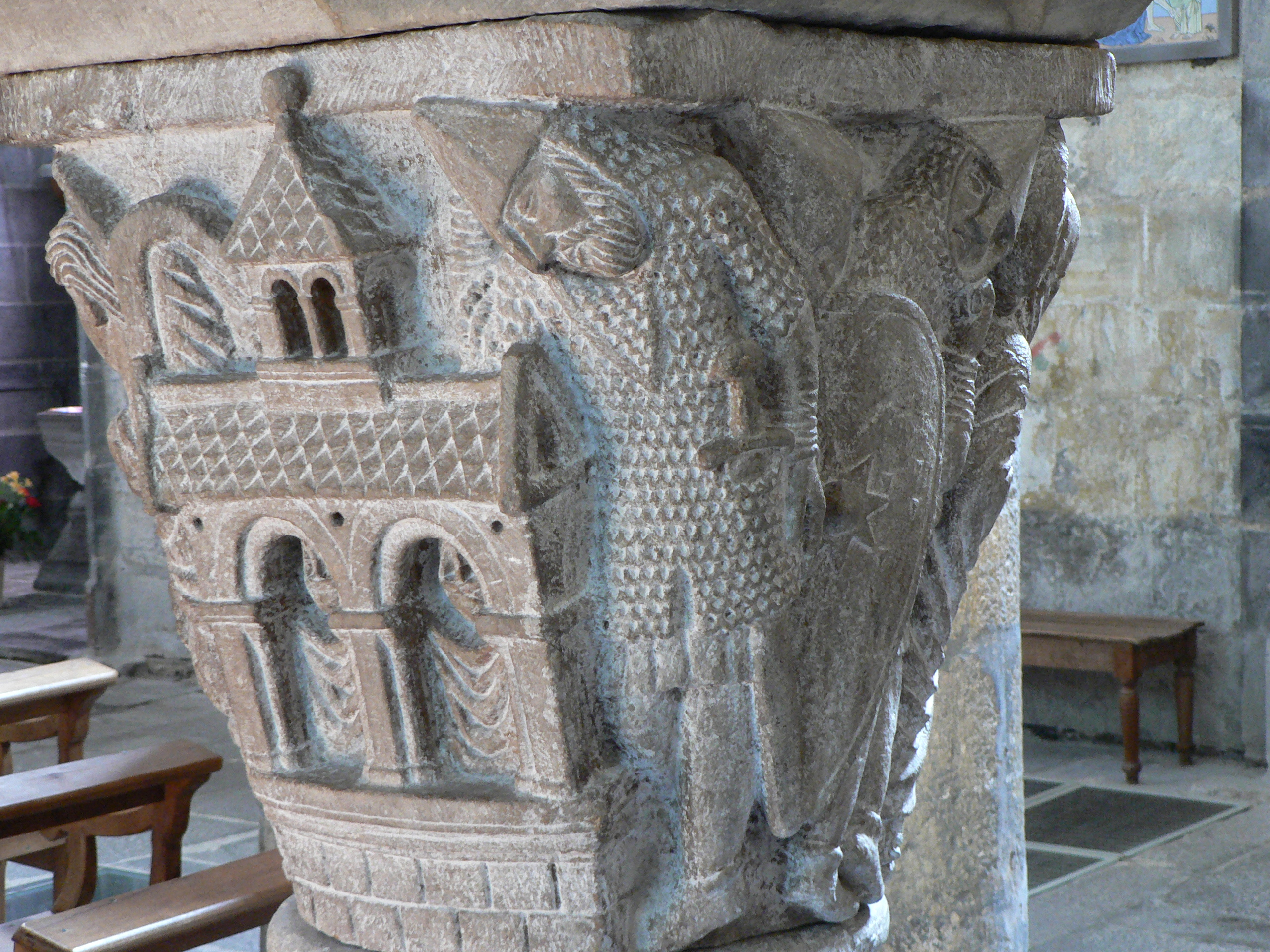 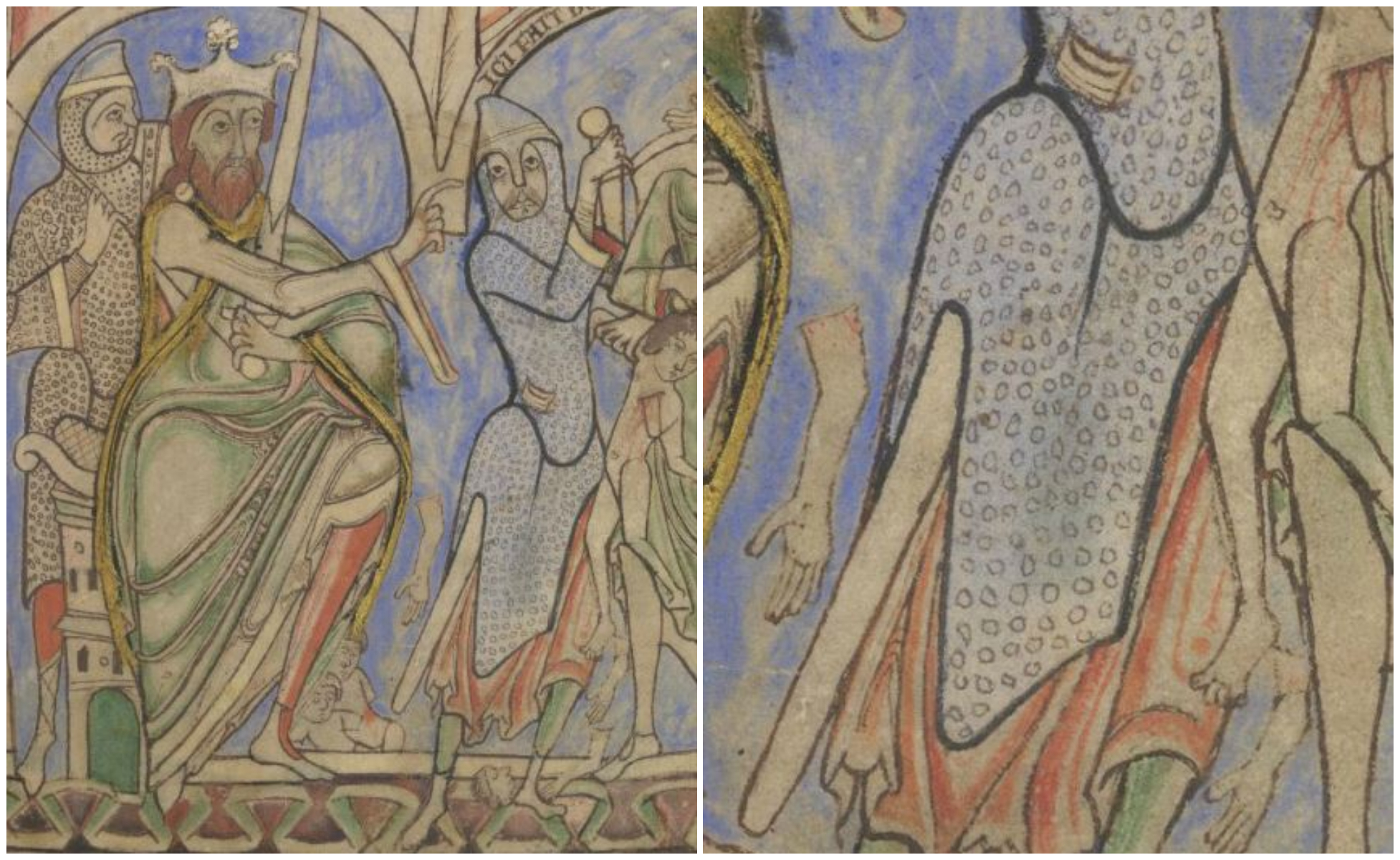 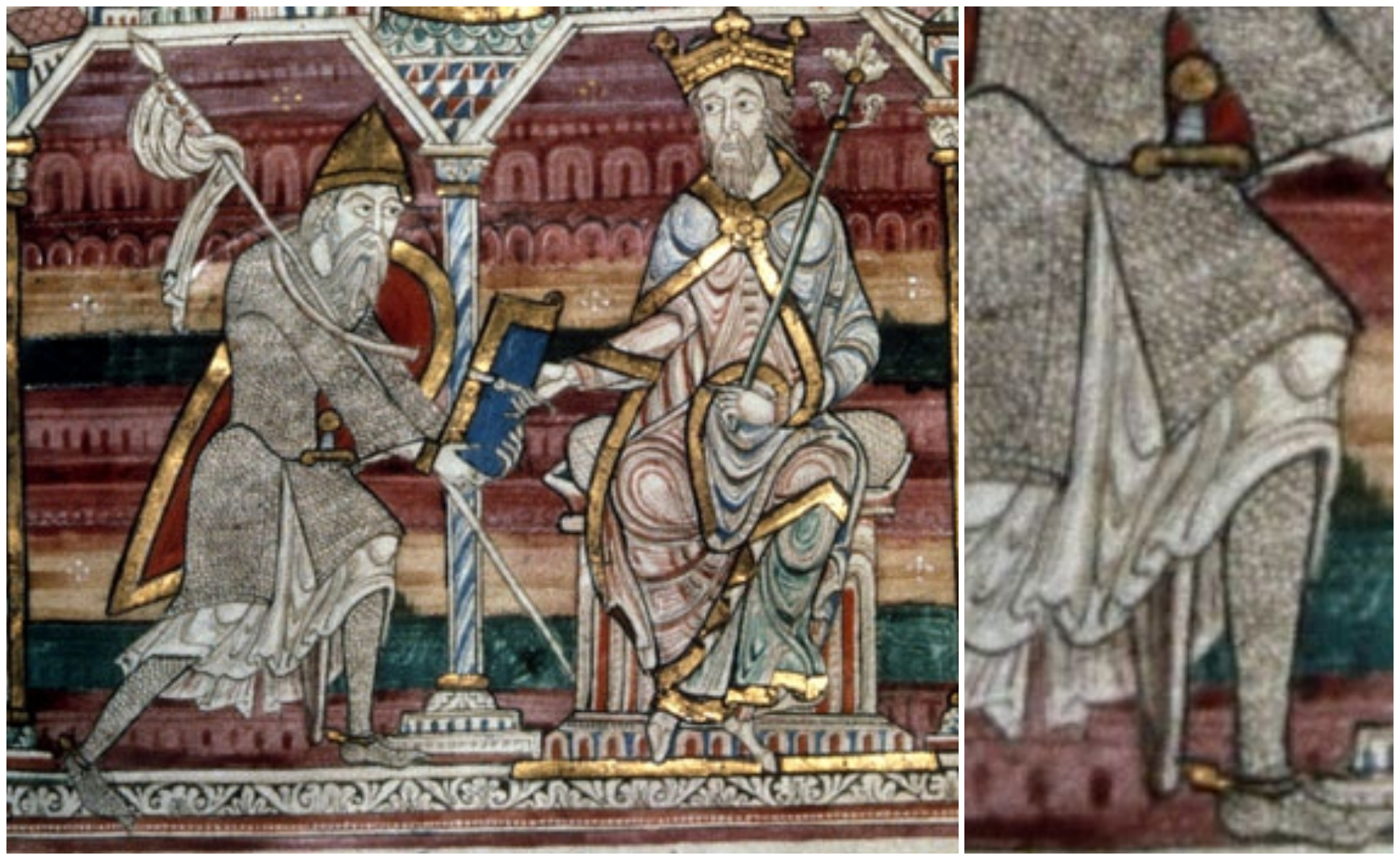 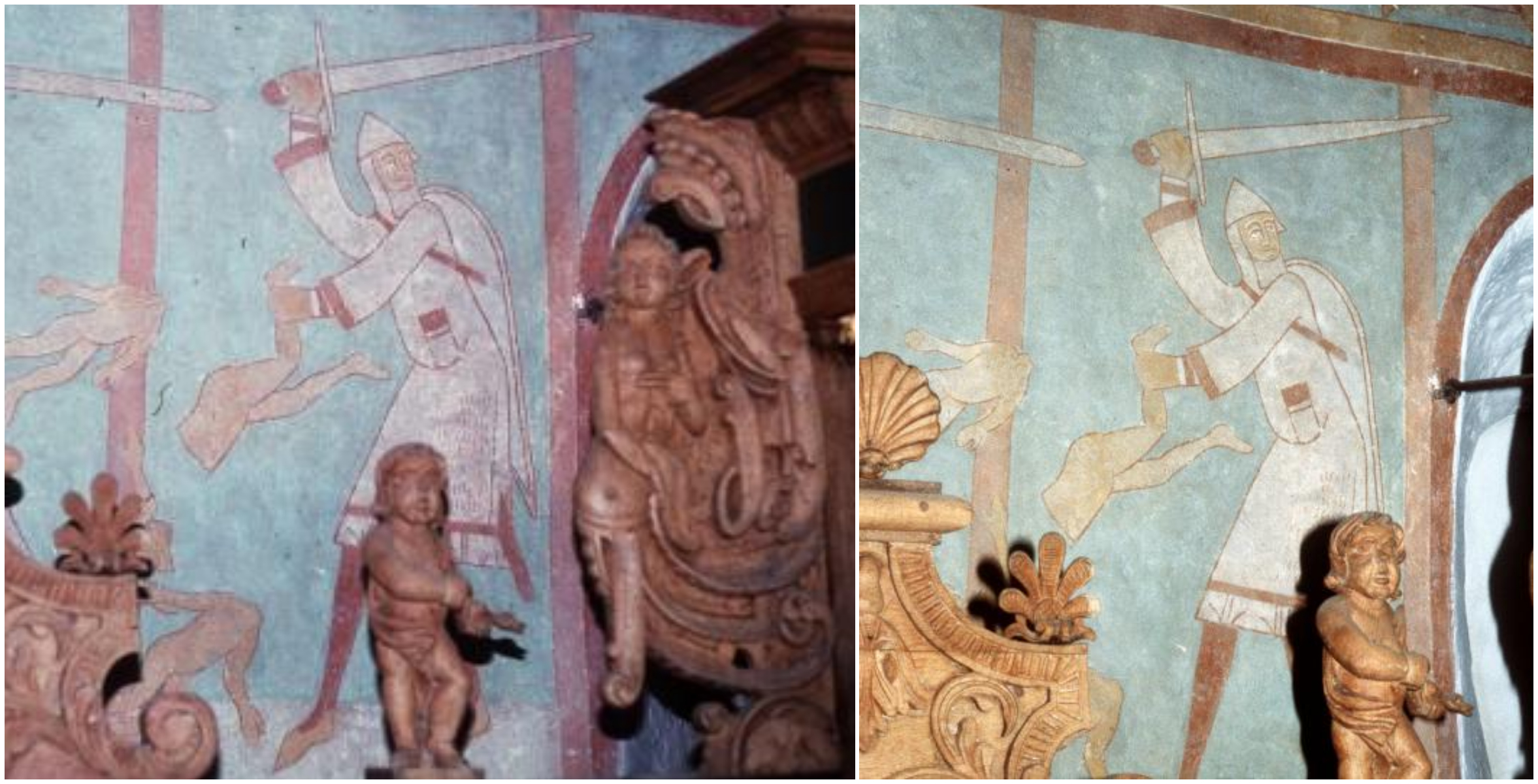 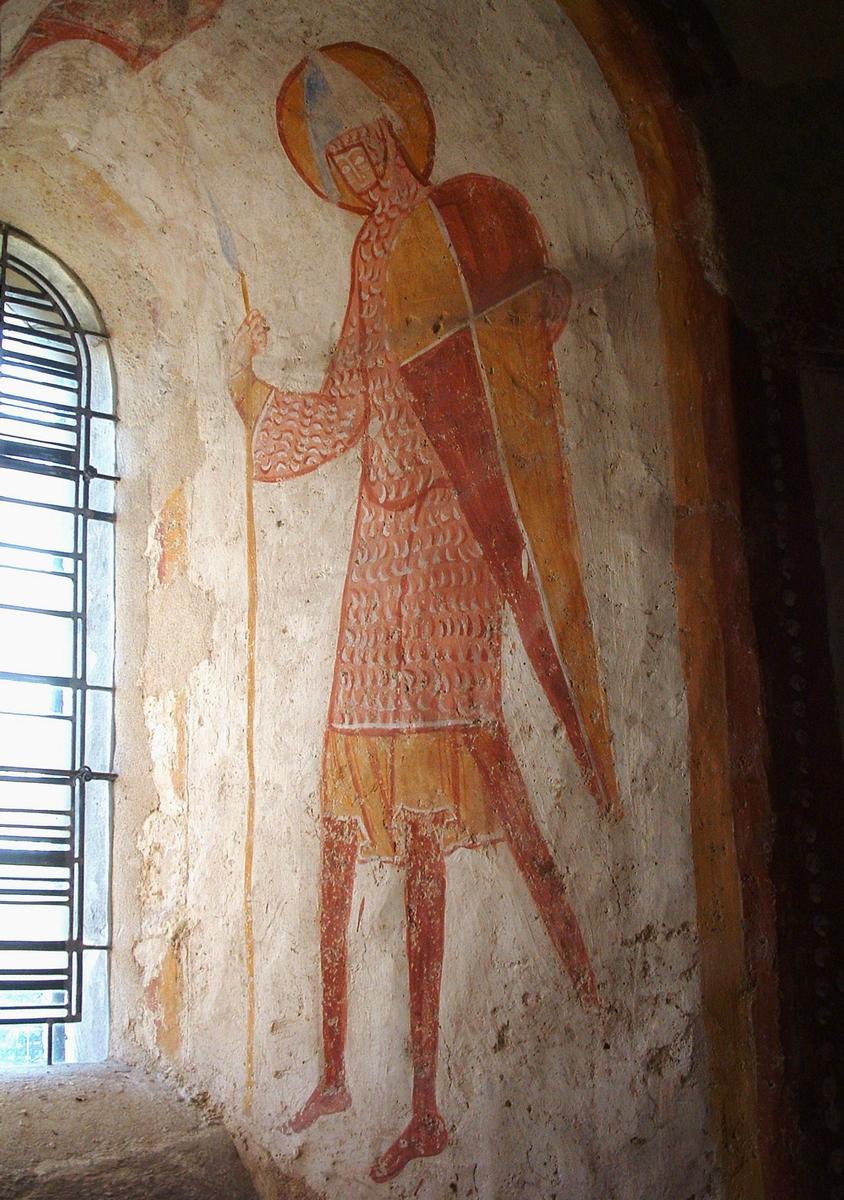 Painting in the church of Our Lady in Areines, 12th century, today’s France. Janberg 2020. 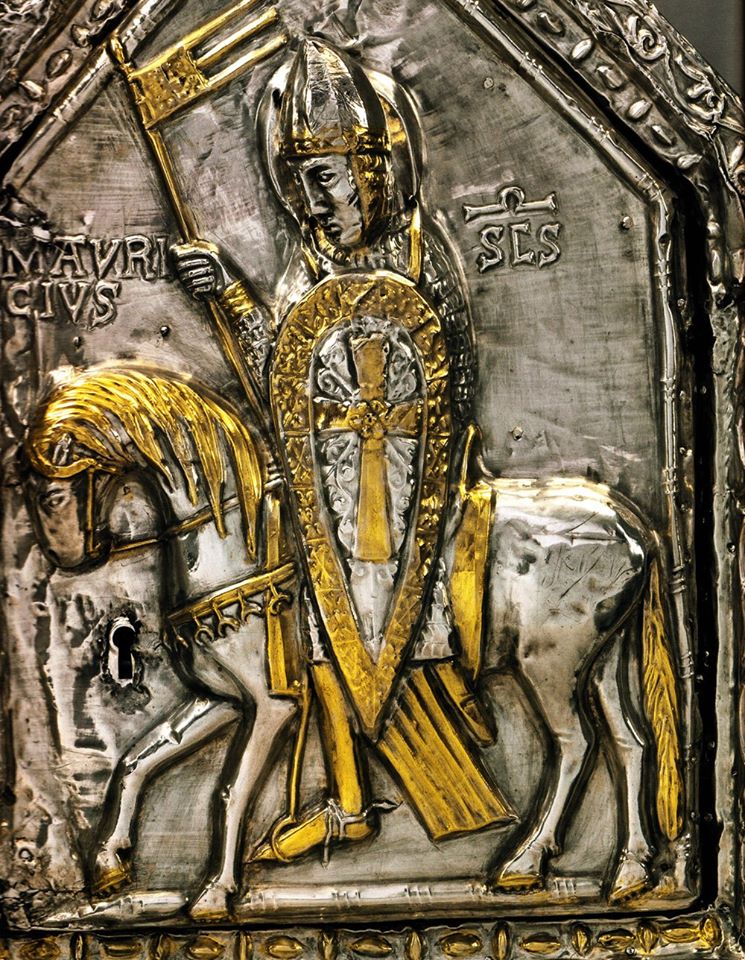 Detail from the shrine of St. Sigismund, stored in the Abbey of St. Morice, mid 12th century, Saint-Maurice, Switzerland.
Lessing 2020.

Aquamanile in the shape of a rider, 2nd half of the 12th century, France. Musée des Arts Décoratifs 2020. 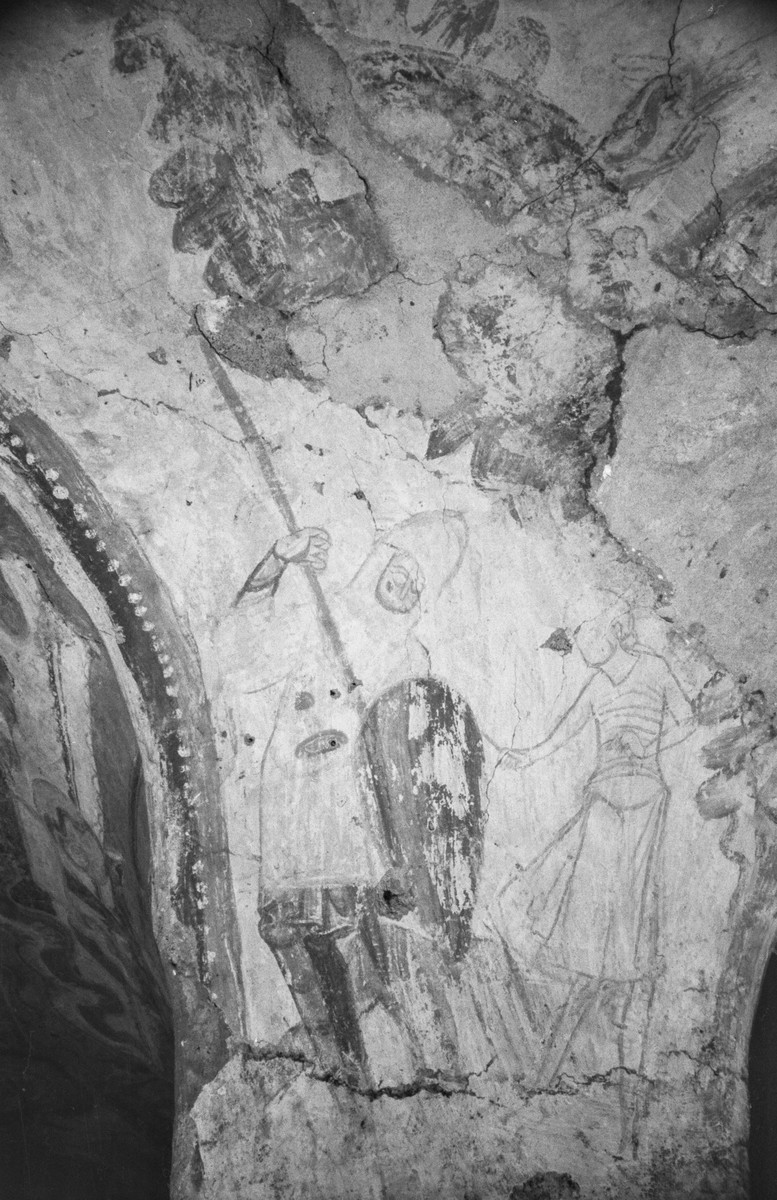 Column head in the church of Our Lady in Saint-Nectaire, 1st half of 12th century, present-day France. Faure 2020. 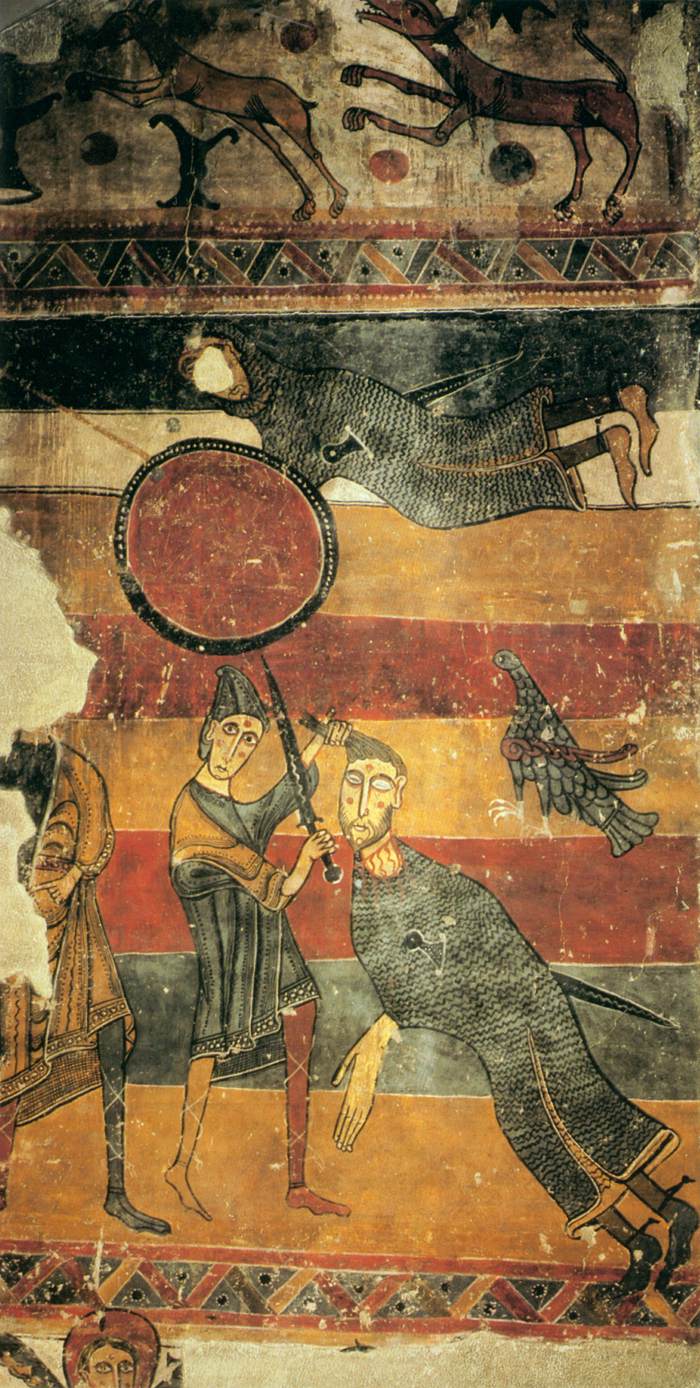 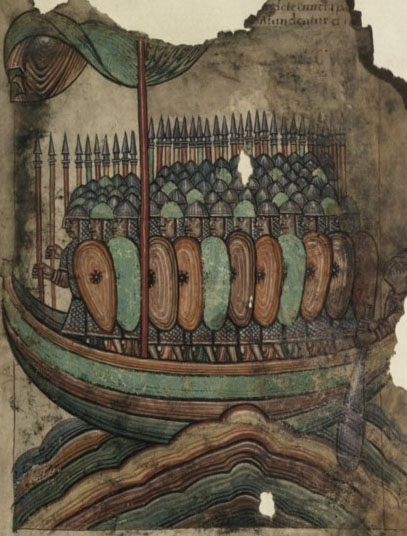 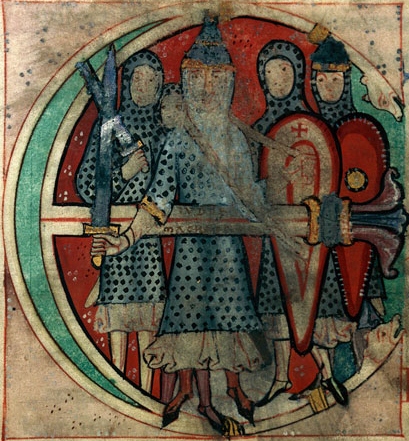 The topic of swords worn under armour is one of the undocumented problems in the literature, which has been noticed only by some reenactors and authors of popular science literature on military (Gravett 1992: 10; Gravett – Hook 1994: 14; Marren 2004; Skodell 2008). The list of sources above is the most complete one that has been published so far.

The mentioned iconographic sources can be classified chronologically from about the second half of the 11th to the end of the first half of the 12th century with possible overlaps on both sides. The oldest iconography is repreented by the Bayeux tapestry. Geographically, this method seems to be found on both sides of the English Channel and to the adjacent regions (today’s Germany, France, England, Spain, Denmark, Switzerland). This combination may indicate that the spread of this method is related to Norman Conquest. Sources show that the main use was the first half of the 12th century. Iconographic sources in which this method of wearing appears include, in particular, biblical scenes, heroic epics or the interpretation of real individuals.

It is clear from the iconography that the belt with the scabbard is fastened around the lower layer (tunic), over which the armour is worn. The opening in the armour is wide enough to accommodate the mouth of the scabbard, which in some cases is slightly pulled out of the armour. The sword is then inserted into this hole and contrasts with the mail background, thanks to which it is easily recognizable in iconography. Another indication of this method is the characteristically inclined scabbard, which protrudes from under the armour. The scabbard placed under the armor can follow the following logic:

1. placing under the armor offers the possibility having the sword even after removing the armor.
2. scabbard is well protected against damage.
3. scabbard is stably fixed, which is a significant advantage.
4. scabbard provides additional side protection.

Swords worn in this way are depicted on both infantry and cavalry fighters. The swords with which this method of scabbard fixation usually have a semicircular or Brazil nut pommel and a straight guard, and belonging to the typical armament of the period. Swords worn by infantry fighters reach down to the shin or ankle of the fighter, and therefore have the typical design of riding swords. The method we are researching is further combined with thigh- or knee-length armours with slits, conical helmets, kite shields and one-handed spears. It is typical that armour of this style is not belted – the general absence of belts in iconography may be partly to blame (even in cases where swords with scabbards are visibly attached from the outside over the armor), but the possibility should be considered that armour of this kind did not require belting, which can give some implication to other armour shown in iconography of 9th-10th century, which are never depicted with belts. Abandonment of this method may be clarified by the extension of the armour, which significantly affected their weight that could no longer be carried on the shoulders without an additional belt.

The main impetus for the creation of the article was an excellent experimental reconstruction of the great Breton reenactor Benjamin Franckaert from the Letavia group. Benjamin wears a sword belted over a tunic, over which he wears the armour, which is lined with textile subarmalis. The armour and textile lining are provided with an opening into which the mouth of the scabbard can be inserted. Benjamin does not use the second belt over his armour.

The owner adds some valuable remarks:

1. The whole set is very functional and the owner has been using it for several years. In addition to several large festivals, he also tested it in smaller battles in the forest.
2. The scabbard is not too high.
3. The lining not only acts as an additional layer of protection, but prevents the rings from damaging the scabbard.
4. When the sword is drawn, the scabbard tends to fall out of the hole. It is possible that there was originally a way to attach the scabbard in place in a more secure way that the owner has not yet discovered.
5. The weight of armour with lining is about 15 kg. While the owner is not limited by this weight, users of heavier armor state that weight is the deciding factor, as all the weight must be carried on the shoulders without an additional belt. The owner adds that the weight also partially rests on the scabbard, which helps the shoulders. Users of the same type of armour state that horseback riding also helps significantly.

Benjamin photographed his armour and sword for this site, for which I thank him warmly. The provided photographs come from his archive and the archive of photographer Julien Danielo. 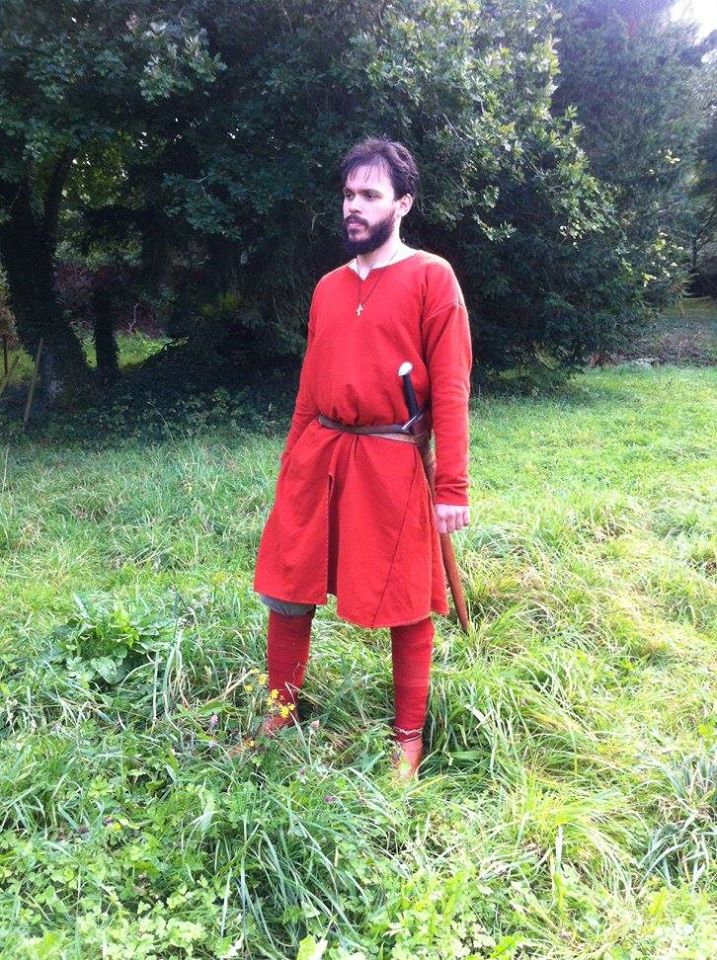 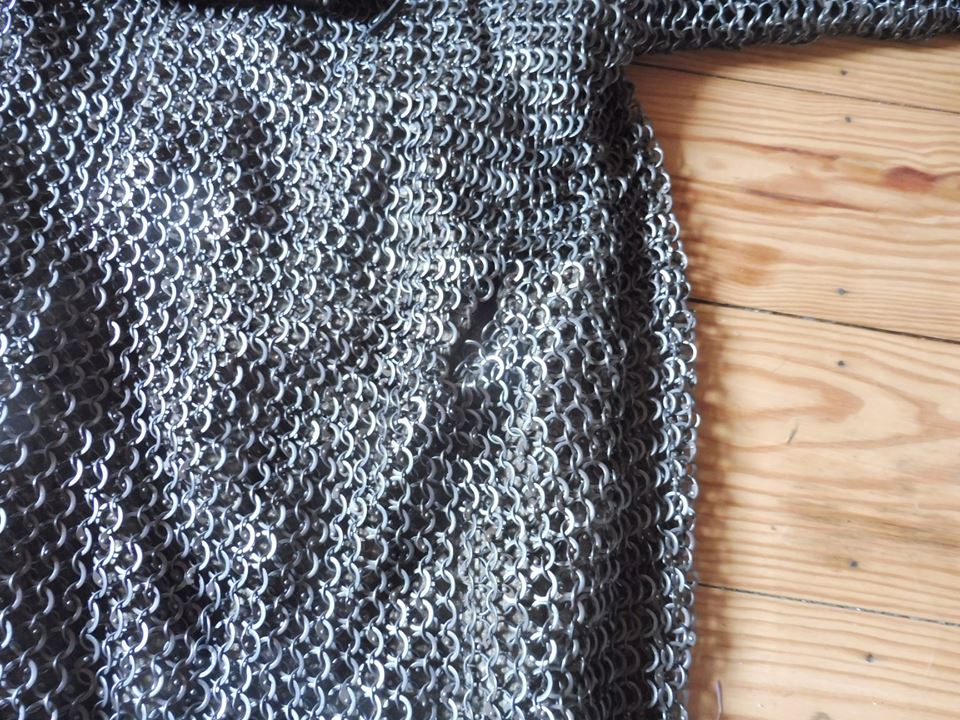 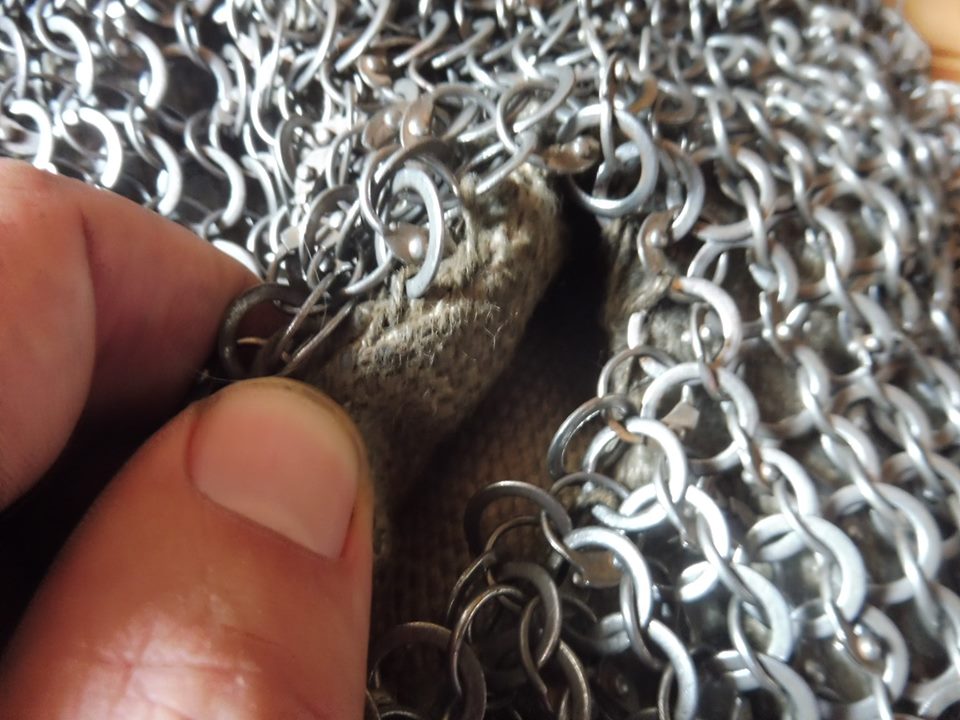 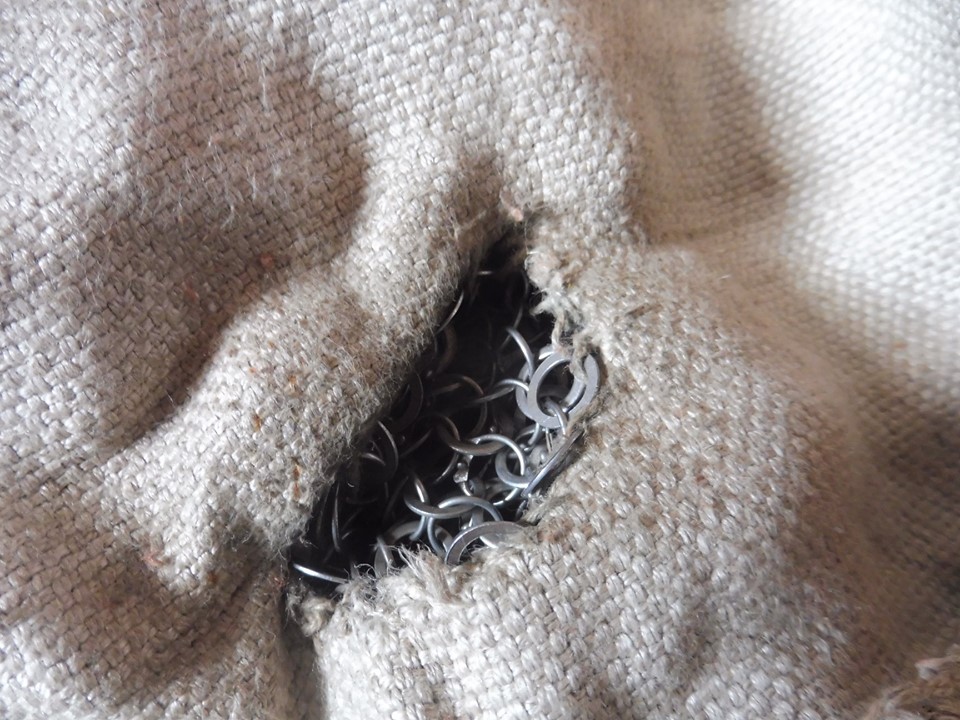 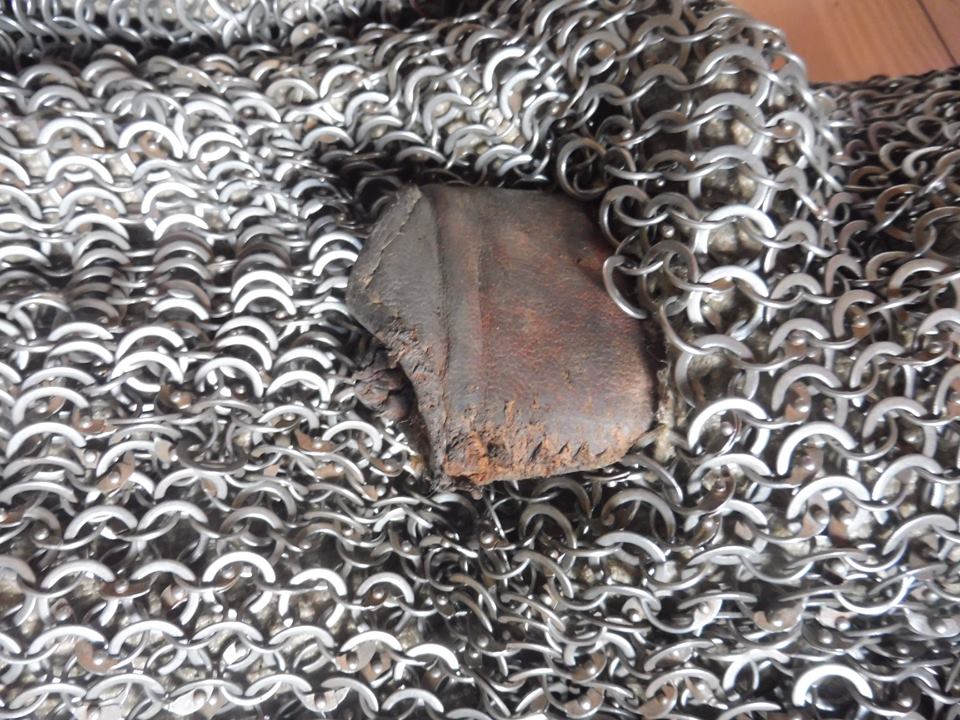 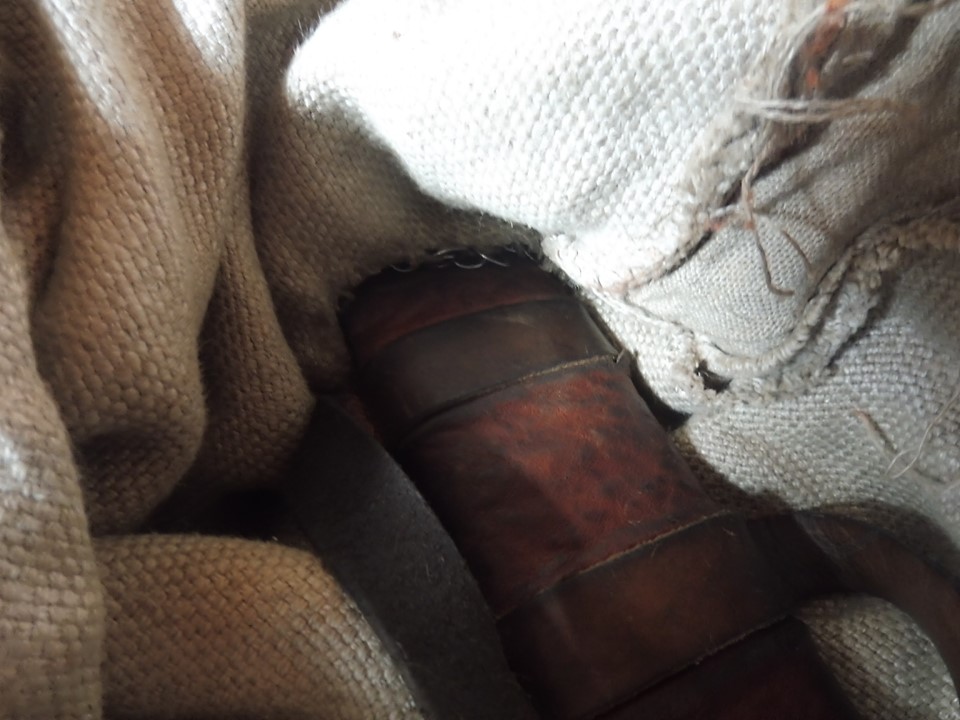 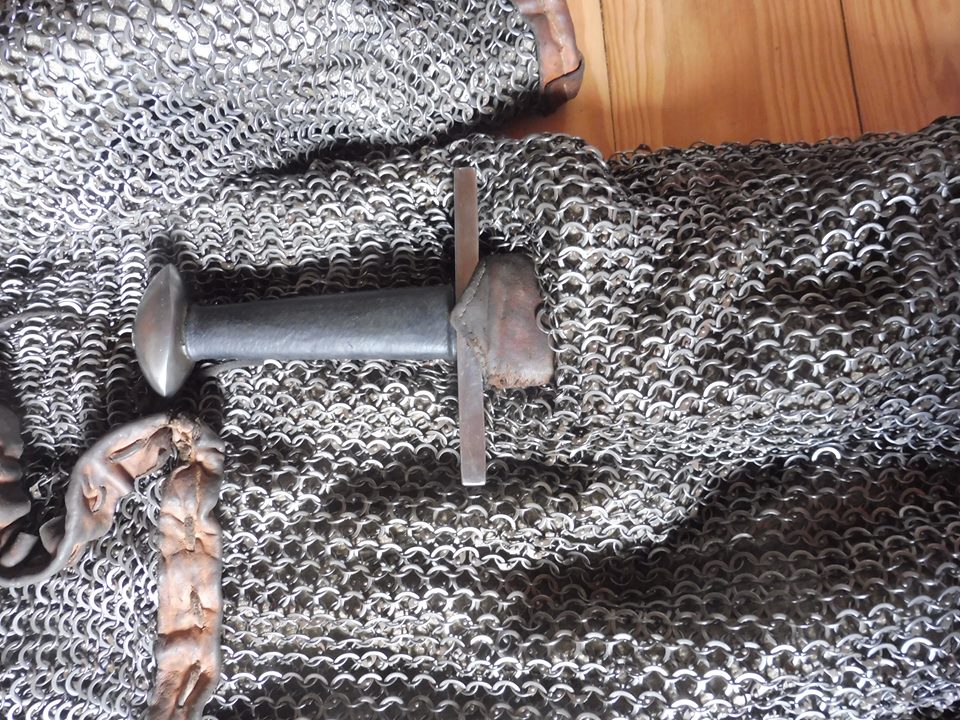 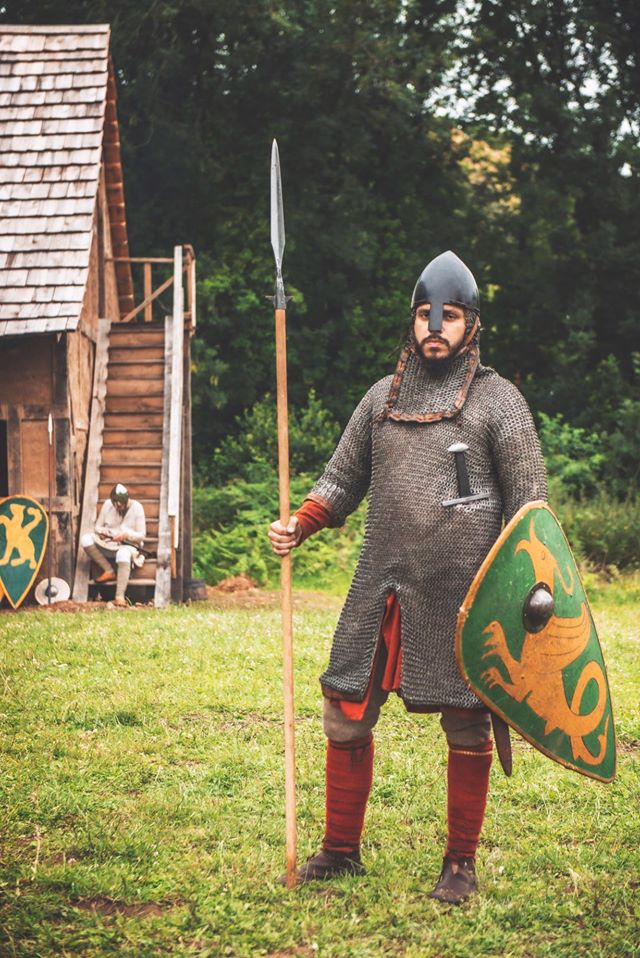 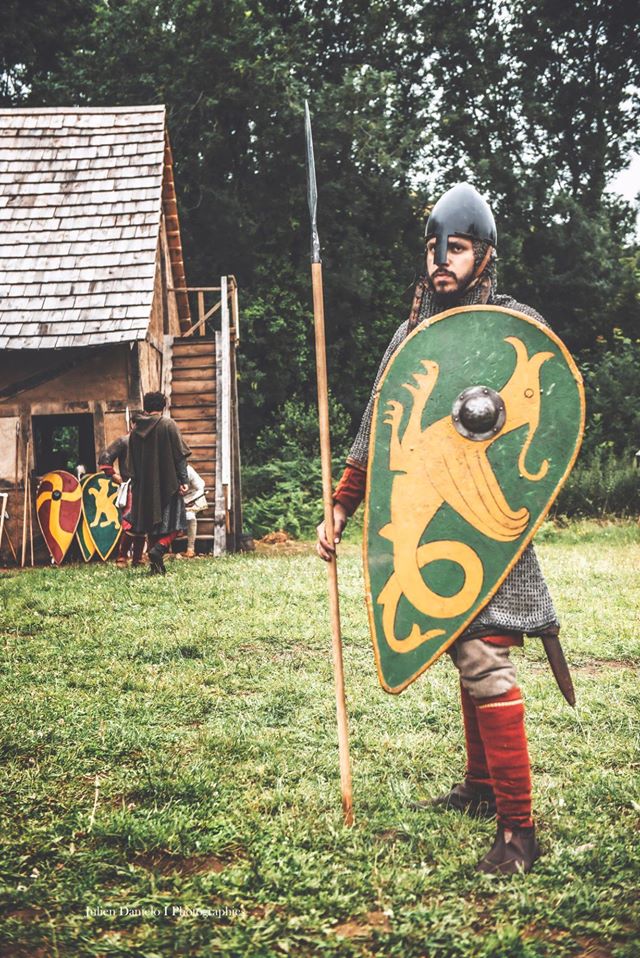 In addition to Benjamin Franckaert, who motivated me to create the article, I would like to thank to the members of the 12th century reenactment study group, who played a significant role in the creation of wider databases of sources. Namely: Pavel Alekseychik, Dmitriy Skliarenko, Carlo Niato, Kai Redink.