The belt from Frøyland, Norway

Unlike the Swedish pieces, the Norwegian belts of the Viking Age belong to the generally poorly known and rarely replicated finds. A potential reenactor who wants to learn more about this type of object is dependent on combining several sources of knowledge, among which the following stand out:

However, the reenactor must be warned in advance that a significant part of the belt fittings, in particular from the Gokstad and Borre mounds (Myhre – Gansum 2003; Nicolaysen 1882), are horse harness fittings and that a large part of the buckles and strap ends are cast from copper or silver alloy, which requires custom manufacturing. In the attached article, we will present one of the better-preserved buckles, dating from the beginning of the 9th century.

Context of the find and its description

The buckle we will describe was found in a grave from Frøyland in Rogaland, Norway. The grave, which was part of a larger group of graves and whose inventory is now in the Stavanger Museum, is marked with inventory number S2222. The mound is located on the western slope of Lake Frøylandsvatnet and was explored in 1899 by the conservator Tor Helliesen, who published it the same year (Helliesen 1899: 46). During the excavation, it was found that the 6 m wide and 1.5 m high mound called Skjærehaug, which was undoubtedly significantly older and which was still visible in the second half of the 20th century, was reused during the Viking Age to build a tomb with dimensions of 2 × 0.75 m. The tomb was filled with stones and the following inventory: 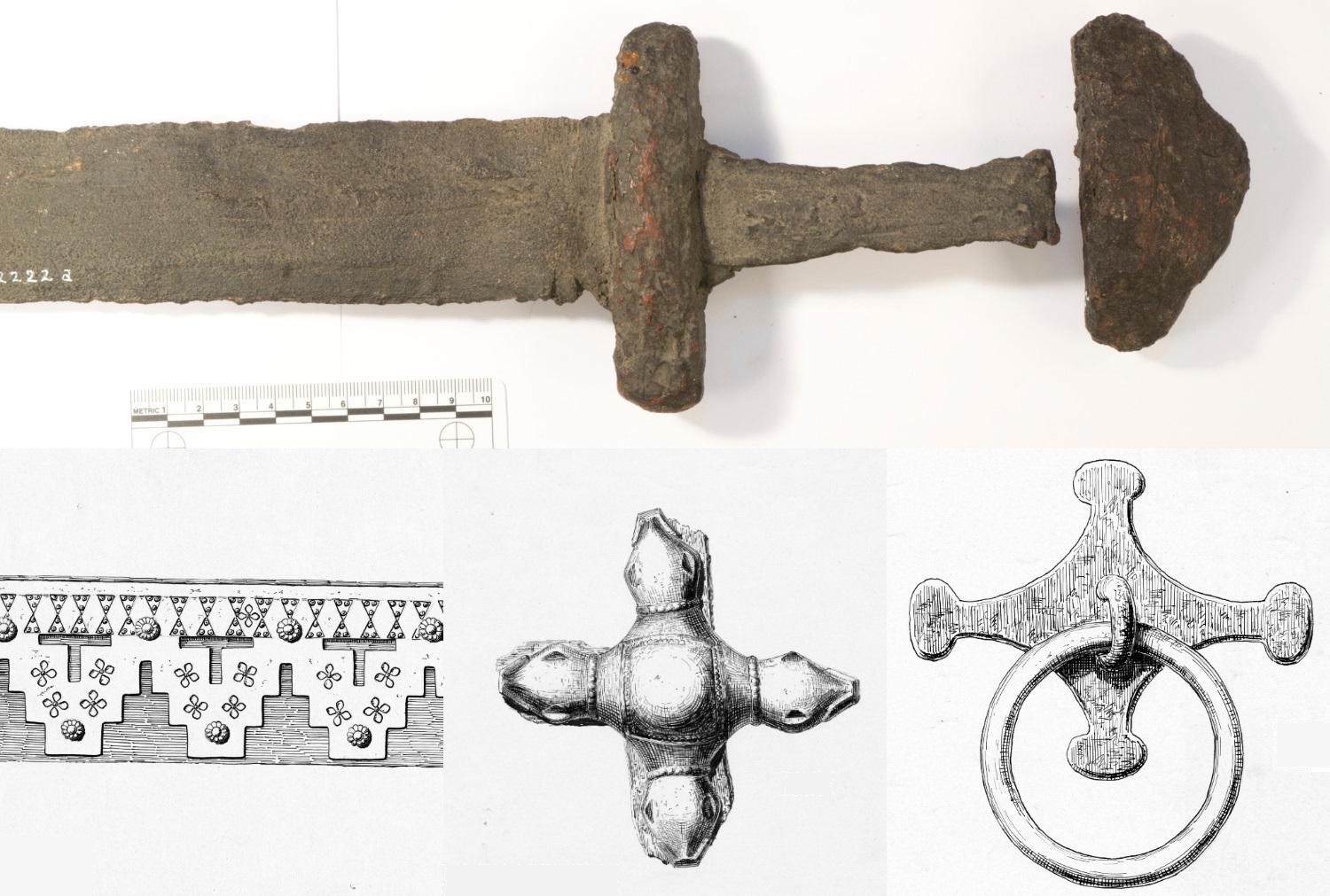 A selection of objects found in the Frøyland mound. Source: Helliesen 1899; UNIMUS catalog. 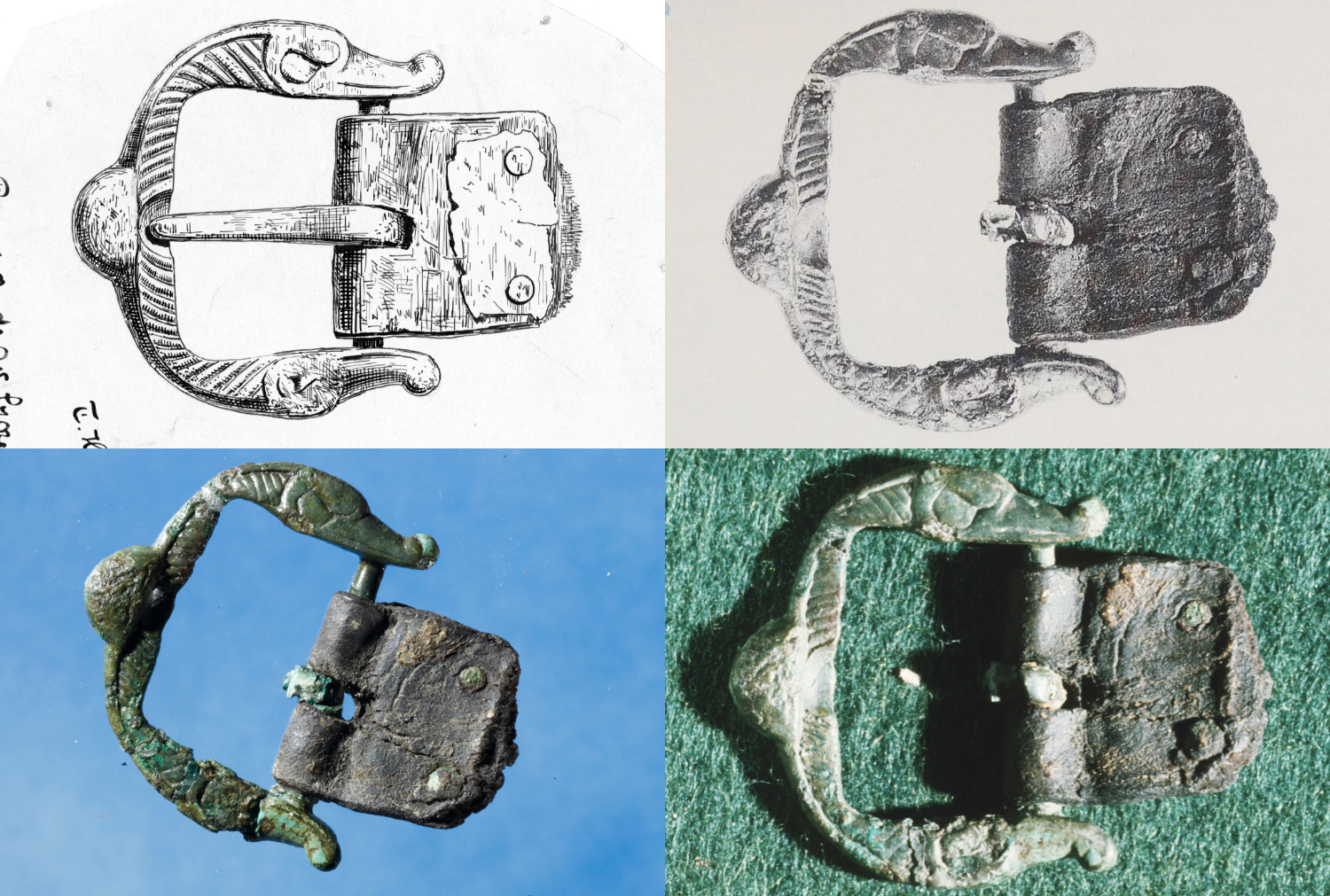 There were two copper alloy buckles (b.-c.) placed along the sword, so it is possible that one of them was related to the baldric (Helliesen himself was in favor of this interpretation). The buckle marked b. is similar in shape to the letter D and is currently glued from five fragments. The buckle itself is about 33 mm long and 35 mm wide, while the inner space is 16 mm long and 24 mm wide. The ends of the buckle arch are slightly widened and represent animal heads – this decor is interpreted by Hernæs as bird heads made in Salin’s animal style III, typical of the Vendel period (Hernæs 1994: 96), while Bakka and Petersen consider the whole piece to be of an Irish production (Bakka 1993: 293; Petersen 1951: 496). The latter can be agreed on based on more recent research (Heen-Pettersen 2014). An analogous use of animal heads on belt buckles can be found in the find T14431 (Petersen 1951: 496). The axle, which is an integral part of the casting, is about 2 mm wide and and the torso of a copper alloy tongue rests on it. When closed, the tongue fitted into a groove on the inside of the buckle arc. On the outside, the center of the arch is equipped with a decorative semicircle. The inner side of the arch is decorated with about 14 lines in the space between the groove and the animal heads, while the outer part is lined with one circumferential line.

The most remarkable part of the buckle is the remnant of a leather belt, which is still wrapped around the axle and folded in half, while there is a hole for the tongue. Leather fixed in this way is a completely unique find to which analogies would be hard to find. In the folded state, the leather is 21 mm wide and 23 mm long; 21 mm corresponds to the width of the original belt. The belt appears to be made of very thin leather (probably around 1 mm or even less) and is preserved thanks to two thin copper alloy plates that embraced both layers of leather. These plates are now absent, but were visible at the time of the discovery. The plates were attached to the leather with two copper alloy rivets. You can see the proposed belt fastening system in the following diagram: 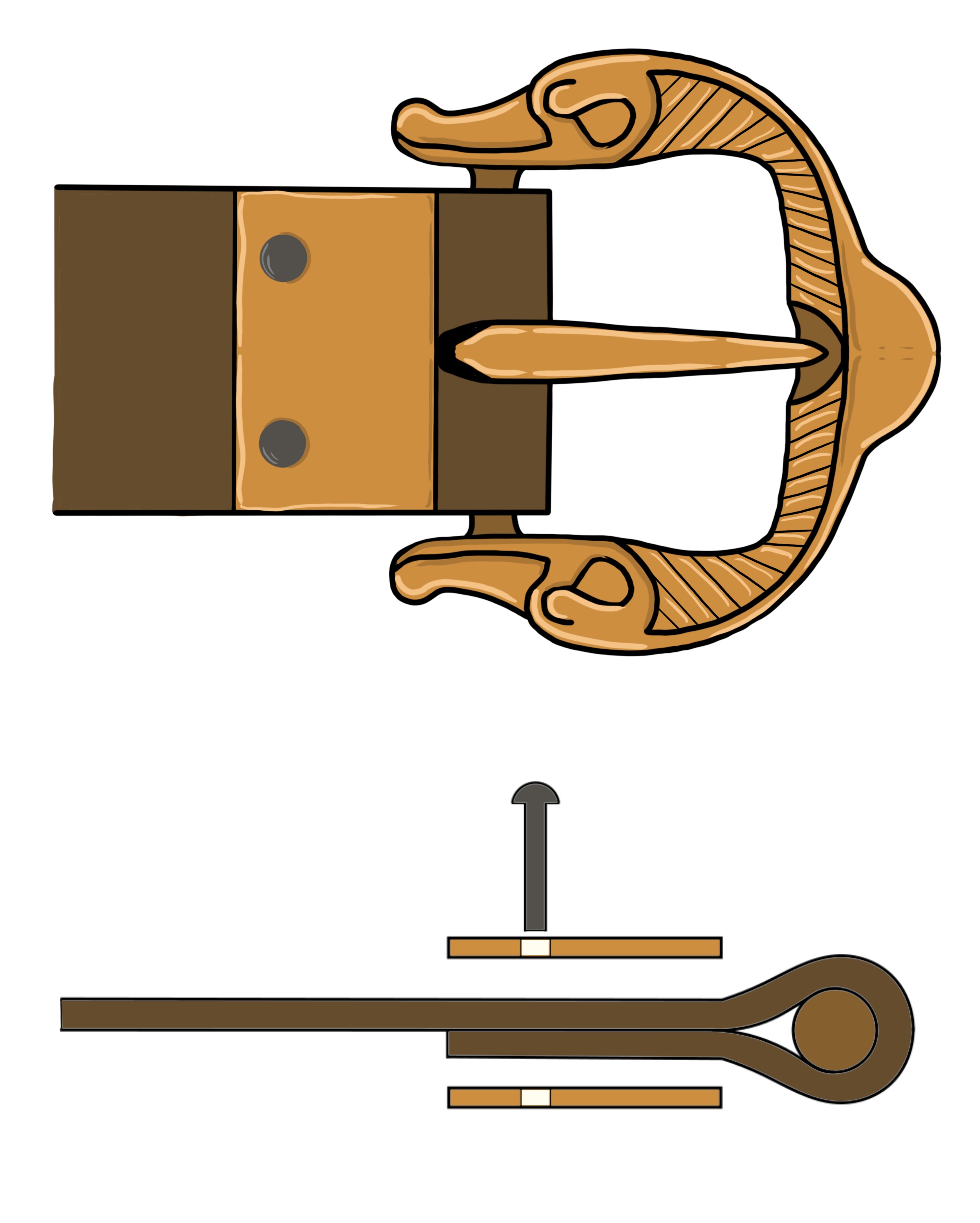 The find from Frøyland is not completely unknown in the reenactment – its imitations are sold by Klesarven and Wulfund. However, it must be said that the buckles of these belts are made of other alloys, in different dimensions, are not well modeled compared to the originals and they lack the original system of fastening the belt (plates with rivets). Strap ends are often used with these belts, even though there were none in the grave. For these reasons, it is necessary to warn against these cheap imitations.

Guldberg, S. C. (2014). The Smith on the Edge of Worlds: New perspectives on technology and ideology in the Late Norwegian Iron Age, University of Oslo.

Heen-Pettersen, A. M. (2014). Insular artefacts from Viking-Age burials from mid-Norway. A review of contact between Trøndelag and Britain and Ireland, Internet Archaeology 38.