It is our joyful duty to inform the reader of a new unique find – the first decorated Great Moravian bearded axe, whose photographs were sent to us at the beginning of May 2021, immediately after its discovery. The head of the axe was found by a detector, who handed it over together with coordinates and other data to the South Moravian Museum in Znojmo. Due to the as yet unexplored possibility that it is a grave find, it is not possible to get closer to the place of the find, but we can say that the find comes from a place that is 10 km as the crow flies from the Hradiště site.

The following article is intended as a preliminary description of the artifact for the general public, and in the future a print version will be prepared, which will be the collective work of the staff of the South Moravian Museum in Znojmo and the author of this website and which will contain more detailed photographs and expert analyzes. 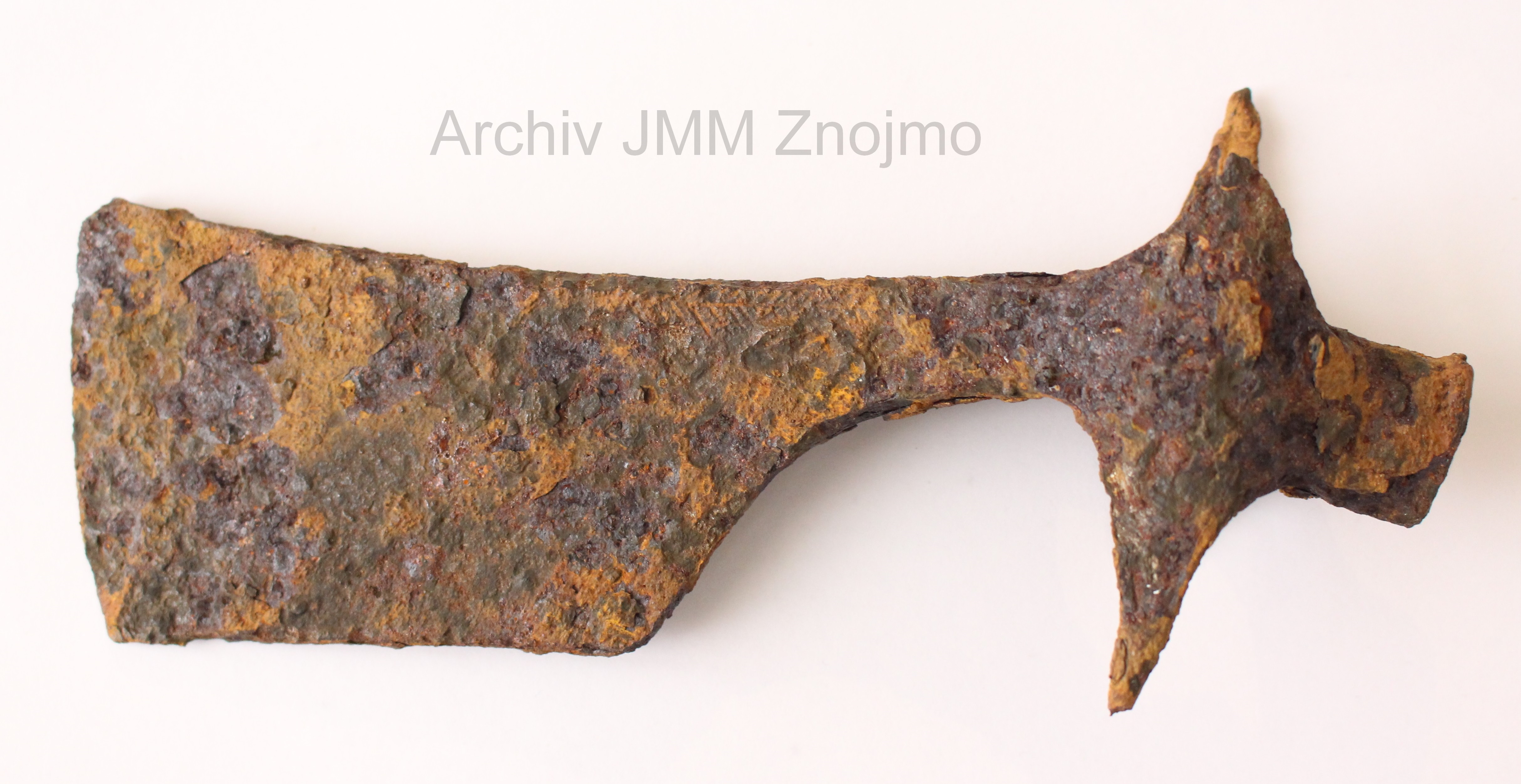 Description of the axe

Typology and dating
The axehead, which we had the opportunity to examine, is locally corroded, but it gives a compact and firm impression. It takes on a shape that is traditionally referred to as the Great Moravian bearded axe with long thorns. It is a light penetrating war axe with a slightly bevelled blade relative to the axis of the axe. Poulík (1948: 33) and Hanuliak (2004: 145-6) call this form type I; according to the classification of Hrubý (1955: 170, Ob. 28.1), Dostál (1966: 70), Ruttkay (1976: 306-7) and Luňák (2018: 126-7), the axe we examined corresponds to the type IA. Nadolski attributed the name Id to this shape (Nadolski 1954: 41, Tab. XIII.3) and Bartošková refers to it as IV.Ac (Bartošková 1988: 7, Fig. 1). The most accurate system established so far is the Kotowicz combination typology, in which an axe can be assigned to type IB.5.30, which is defined as a narrow asymmetrical axe with a bearded-shaped blade having a handle hole with thorns on both sides and a tapered hammer (Kotowicz 2018: 107-9). We can also mention the definition of type IV.Ac according to Bartošková, according to which it is a Moravian bearded axe with a longer narrowed neck terminated by a vertical rectangular surface and pointed spines at the handle hole (Bartošková 1988: 7). There are hundreds of axes of identical shape, which are spread mainly in Moravia, Slovakia and Poland, more limitedly in the Czech Republic, Hungary and the Balkans (Kotowicz 2018: 108).

In general, the find can be classified between the second half of the 8th century and the 10th century (Kotowicz 2018: 107-9), but in the Moravian context we can speak with a high degree of certainty about the Great Moravian horizon, ie the period of functioning of Hradiště fort in Znojmo (Klíma 2000; Klíma 2009). The dating of the bearded axes in Moravia is undoubtedly the entire 9th century (see the discussion in Luňák 2018: 151-3). 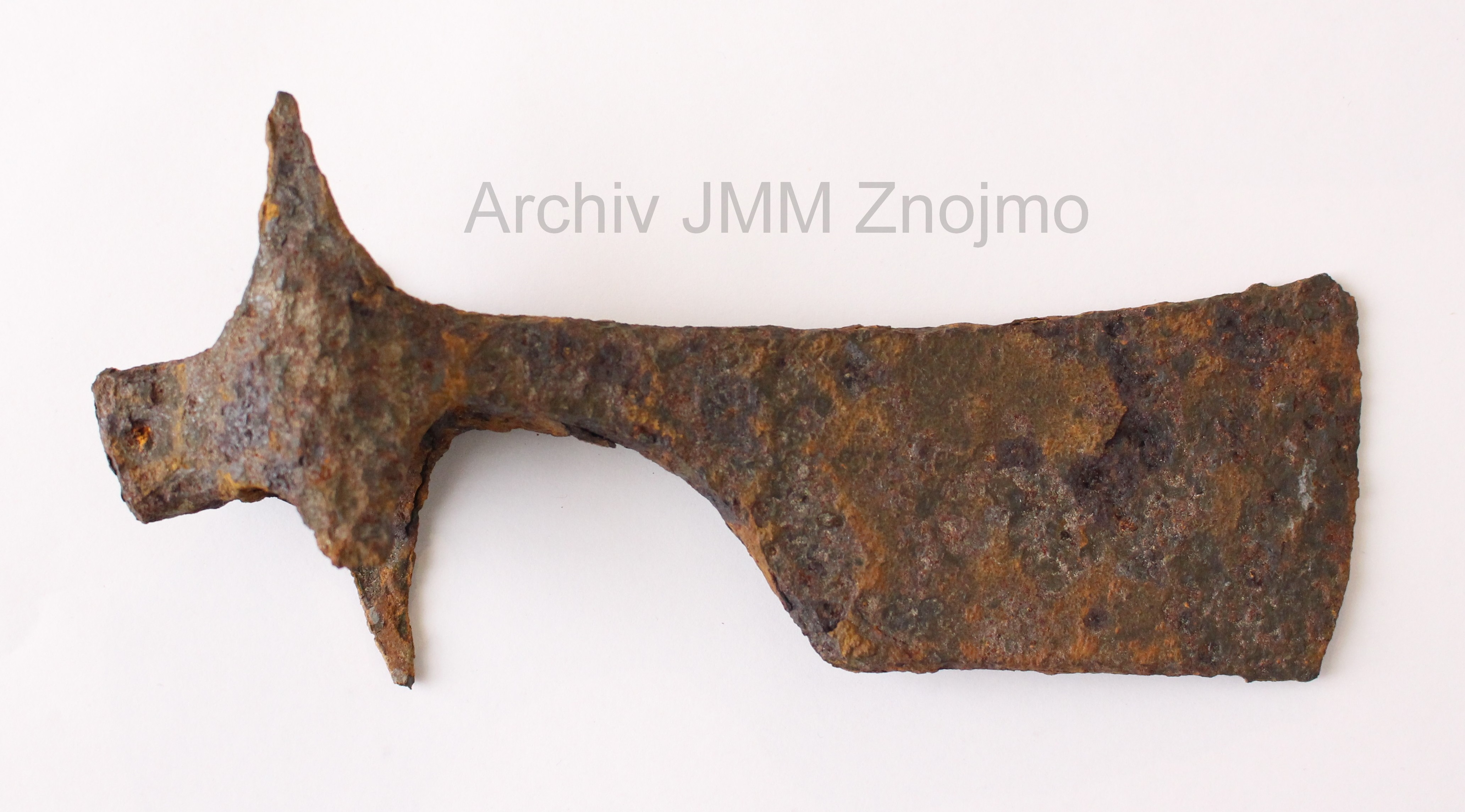 The egg-shaped handle hole appears to be slightly conical – it measures 32 × 27 mm at the upper mouth, 31 × 29 mm at the lower mouth. It is oriented so that the shaft forms an angle greater than 90° (approximately 100-105°) with the upper edge of the blade and the entire blade is slightly inclined downwards, which multiplied the penetration of the weapon. The hole is lined with long damaged thorns. On the left side, when viewed from the hammer, the upper mandrel is damaged and the span of the thorns is 70 mm, on the right side the lower thorn is damaged and the span is 67 mm. The span of the original thorns in a symmetrical design can be estimated at 87 mm. The thorns have a thickness in the middle of their heights varying around 2-3 mm, from where they taper to about 1-1.5 mm at the ends. The maximum thickness of the weapon at the level of the center of the thorns is 34 mm. The center of the thorns is rather rounded, not accentuated by a sharp rib. Looking into the handle hole, we see a large strip of separated scale-like material on the axis of the left thorns. There is a possibility that it is a remnant of eye welding (Kotowicz’s variant 5; Kotowicz 2018: 27), which is also known in Great Moravian beards (Pleiner 1967: 79). The ovoid shape of the eye may also point to the possibility that the eye has not been punctured. This possibility must be confirmed or refuted by further analyzes. There are no visible traces of wood in the eye. Originally, the axehead could be equipped with a deciduous shaft with a length of 600-900 mm, on which it was more likely to be mounted from below (Kotowicz 2018: Pl. XIX-XXIV; Poláček et al. 2000: 199, Abb. 22-27). 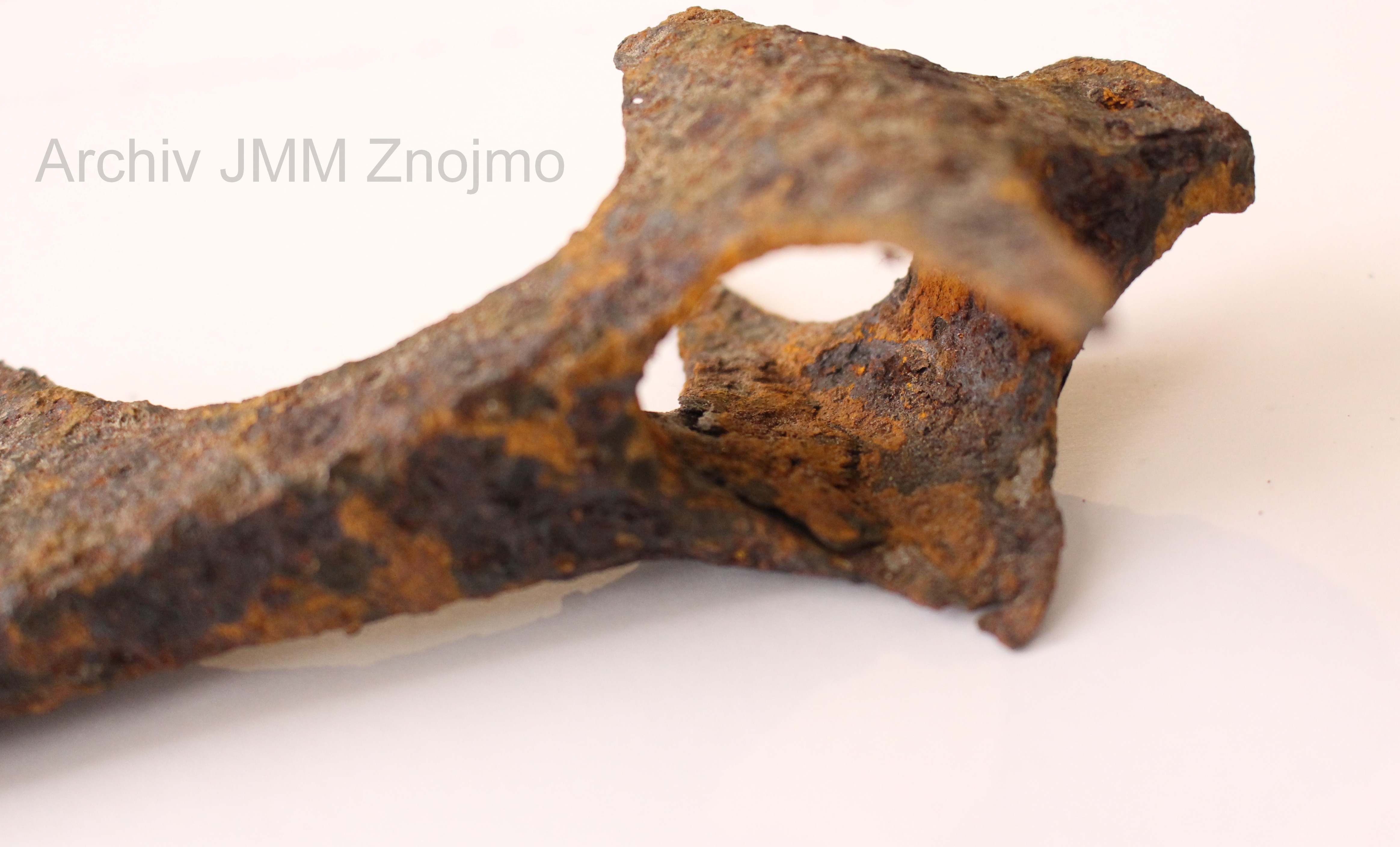 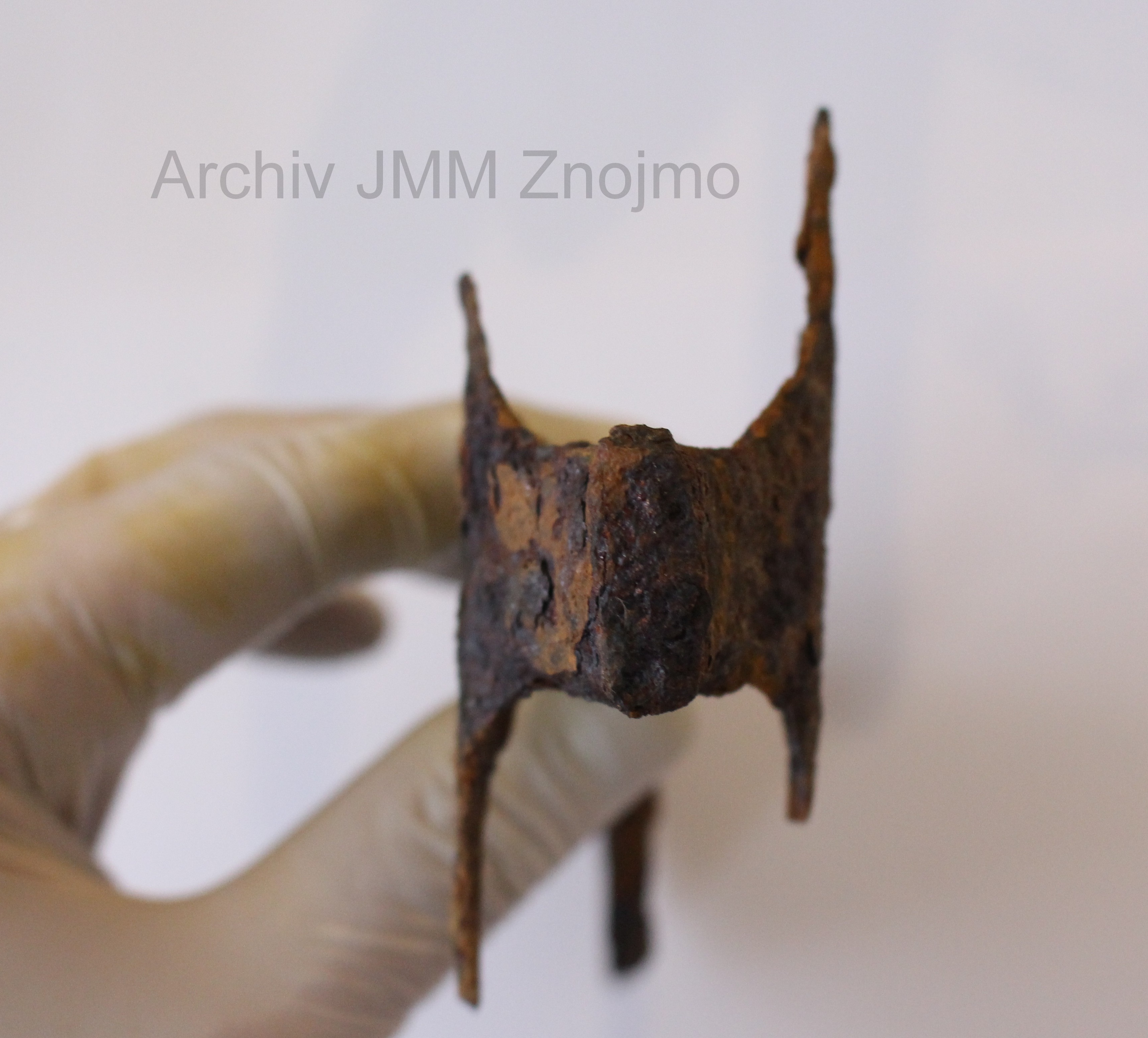 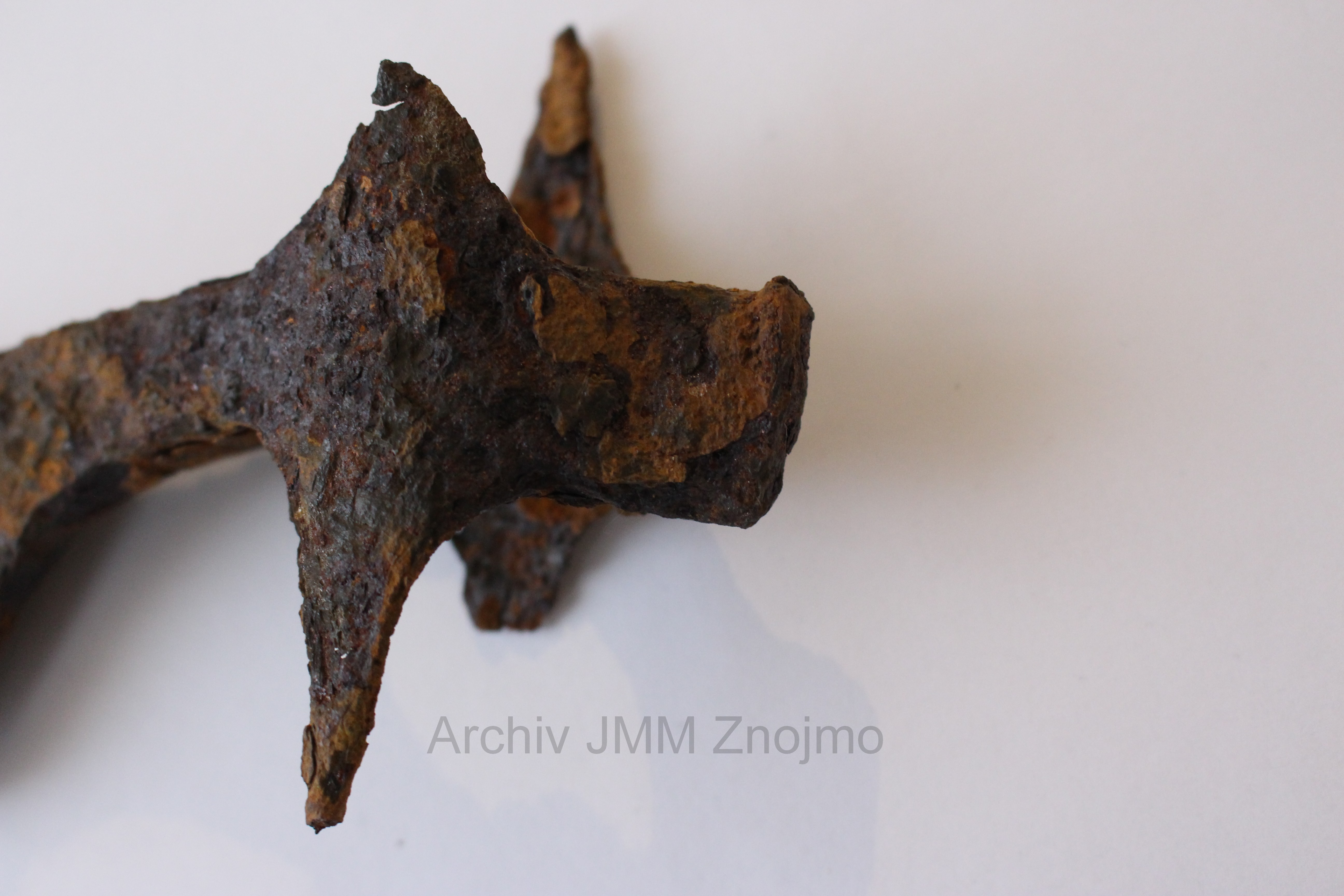 Decoration
On both sides of the blade, at the upper edge, there is a decoration in the form of a branch with leaves radiating towards the handle hole (left side) and away from it (right side). On the left side, it is visible at a distance of 25 mm from the handle hole (when viewed from the hammer) and has a length of 31 mm (14 radial leaves at a frequency of 5 leaves / 10 mm). On the opposite side, the decoration is less visible, at a distance of 43 mm from the handle hole and at a length of 14 mm. The length of the leaves in both cases varies between 4 – 6 mm. No other traces of decoration were found on any area of ​​the axe (all areas of the blade, thorns and hammer were examined). It is possible that X-ray analysis proves its existence in other areas. The decoration appears to be cut with a straight metal tool (for technique see Kotowicz 2018: 37), the grooves are not deep and have had to suffer considerable corrosion. Whether the decoration was originally filled with another metal is not known at this time, no contrast metal is visible to the naked eye. 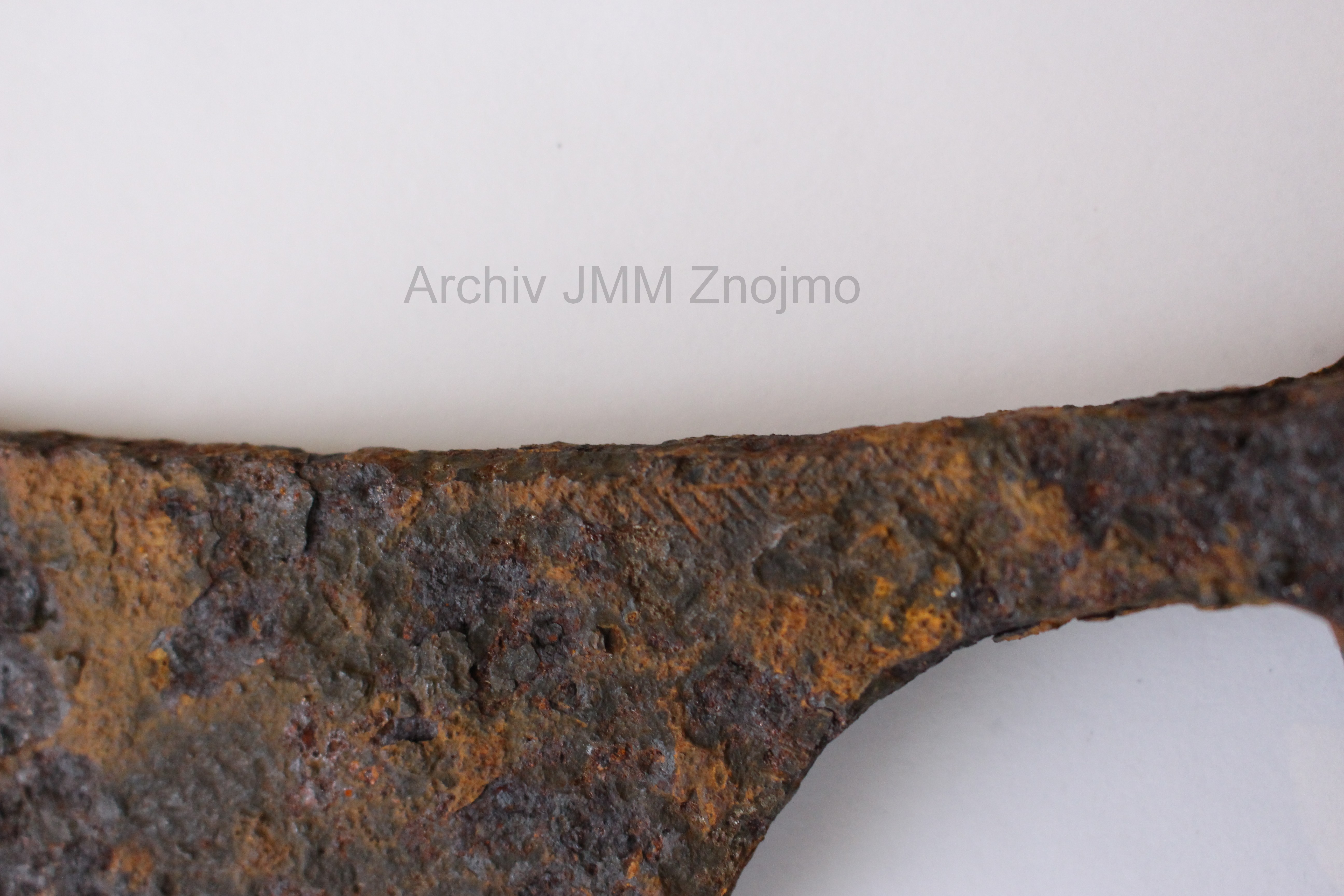 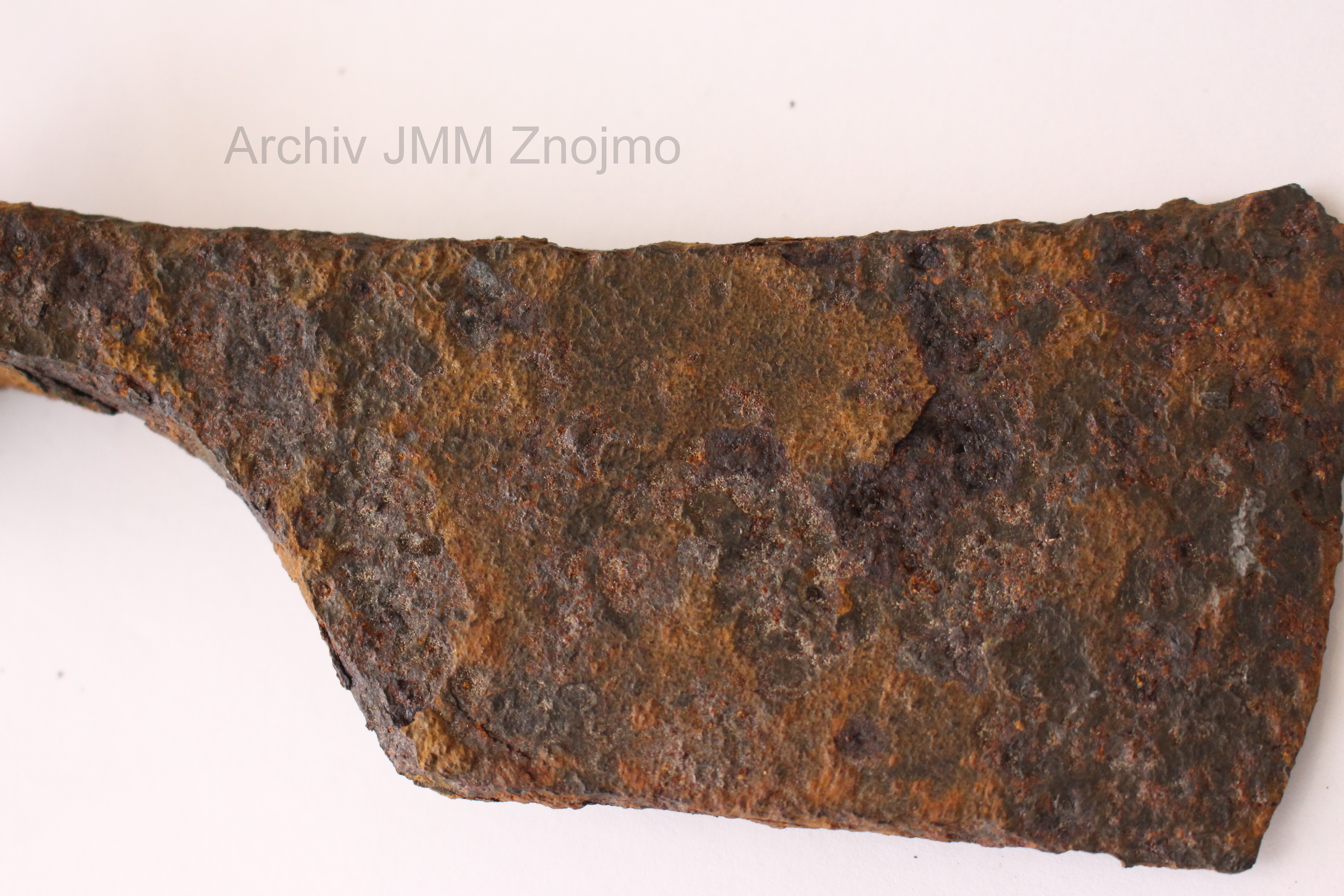 The decoration is an unusual feature of axes of this type, which is currently not known in any other axes from the territory of Moravia (Luňák 2018: 74-6). In neighboring Poland, where axes are very precisely revised (Kotowicz 2014; Kotowicz 2018), elements that can be described as decorations can be found in the Early Middle Ages in only 3% of finds (Kotowicz 2011: 106). The geographically closest decorated specimen of the axe is the find from Bojná, whose neck is decorated with two transverse lines (Kouřil 2008: Fig. 3.7). Another analogy is a detector find from the village of Bašnice, discovered in 2019 and published on this website (Vlasatý 2020). The Bašnice miniature axe is inlayed with silver wire, which is arranged in simple and double lines, clusters of lines, birds, crosses, branches and triangles. However, the closest analogy in terms of size and appearance can be described as the bearded axe from the locality Barkowice Mokre, Poland, dated to the 9th century (Góra – Kotowicz 2008-2009; Kotowicz 2011: 107; Kotowicz 2014: 15). This axe is decorated with simple lines arranged in fields, which are filled with hatching, the result corresponding to the motif of a branch. Another comparable piece that we can mention comes from the locality Bardy, Poland (Kotowicz 2014: 15); this 9th century axe is decorated with grooves on the neck, thorns and parts of the hammer, which are filled with copper alloy wire. 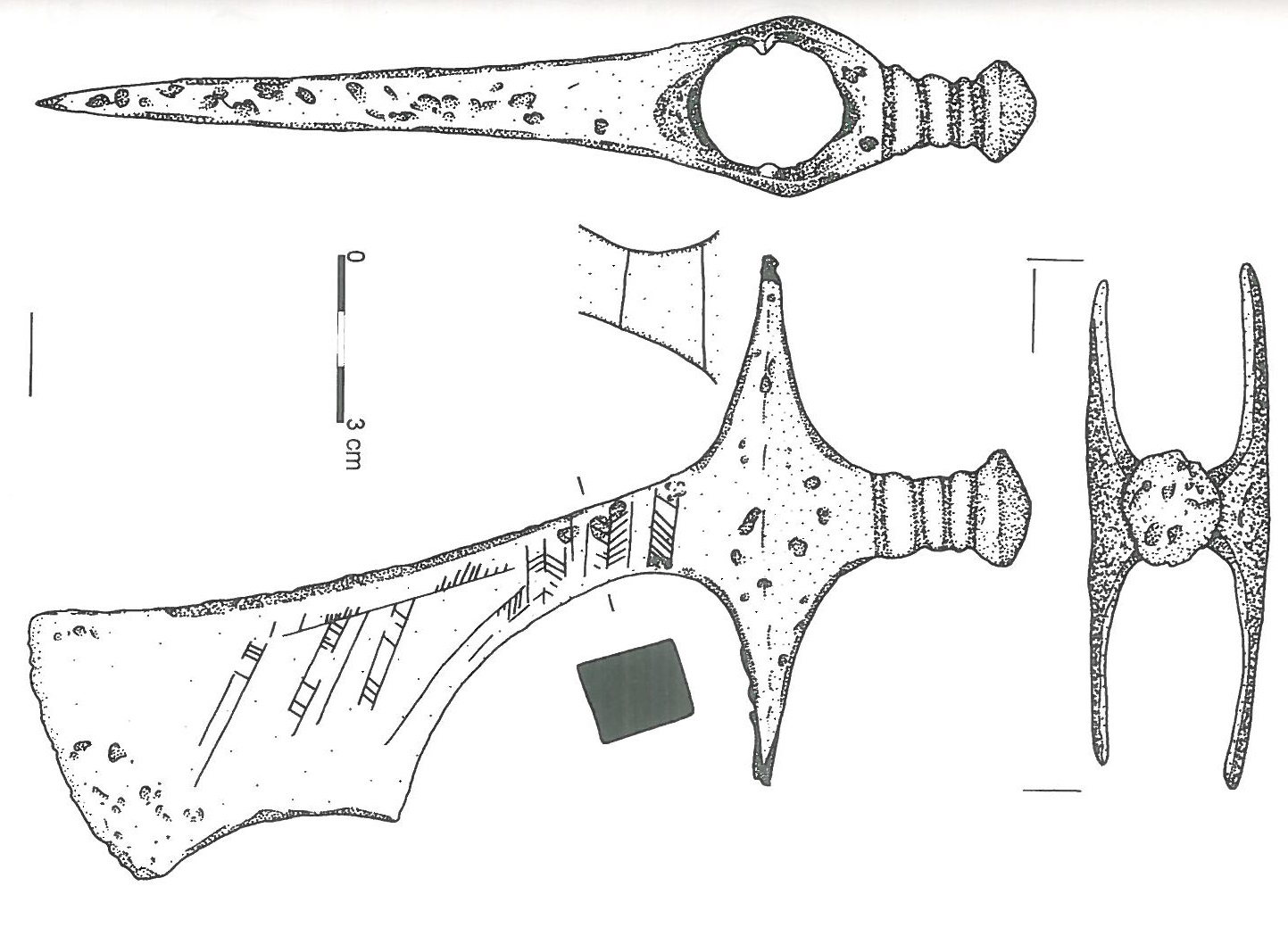 We would like to thank Miss Lucia Bejčková, who also selflessly helped with the documentation, for pointing out the extraordinary find. We are deeply indebted to the archaeologist Alena Nejedlá from the South Moravian Museum in Znojmo for her approach to the find, the possibility of preliminary publication and kind acceptance, under whose direction the axe will be published in a press. We would also like to thank the Voron historical fencing group, which created a homely atmosphere for us during our visit to Znojmo.

Robak, Zbigniew (2017). The Origins and the Collapse of the Blatnica-Mikulčice Paradigm. In: Slovenská archeológia LXV/1, 99-162.