Possible function of the “Perun Axes”

In this article we shall focus on Early Middle Ages axe miniatures, so called “Perun’s Axe”, which have recently come to a great attention from reenactors and neo-Pagans. We will attempt to outline key sources of information and will reflect upon possible function of the symbol, which sure will bring a lot of controversy.

It is important to say right in the beginning that at least in 9th – 12th century, axe miniatures were used ranging from Ireland to Russia, and are thus not bound solely to Slavic lands as is often presented. Apparently, real-size local axe types were copied, and in the case when we find an axe miniature that does not follow a shape of local weapon, we can speculate about movement of people or import of goods. In general, the miniatures were made of copper alloy (“bronze”), amber, silver, iron, tin alloys, lead and bone. The label “Perun’s Axe” is, as will be described, based on interpretation from 1960s, which does not reflect the current research. For that reason, we will stick to the term “axe miniature.”

Axe miniatures research has gone through a century of interpretations, which brought various views on the topic. The whole issue suffers from insufficient cataloging and lack of cooperation between East European, Scandinavian and West European researchers, which caused creation of detached catalogues, which do not reflect one another. Currently, the best source for East European axe miniatures are catalogues by P. Kucypera, P. Pranke a S. Wadyl (Kucypera – Pranke – Wadyl 2010; Kucypera – Pranke – Wadyl 2011), which count 154 specimens from 10th – 13th century. Scandinavian and West European miniatures were collected by Bo Jensen (Jensen 2010), with 44 items in total. Since publication of these catalogues, there were many new finds, some of which were made public on this website (Vlasatý 2018a; Vlasatý 2018b). 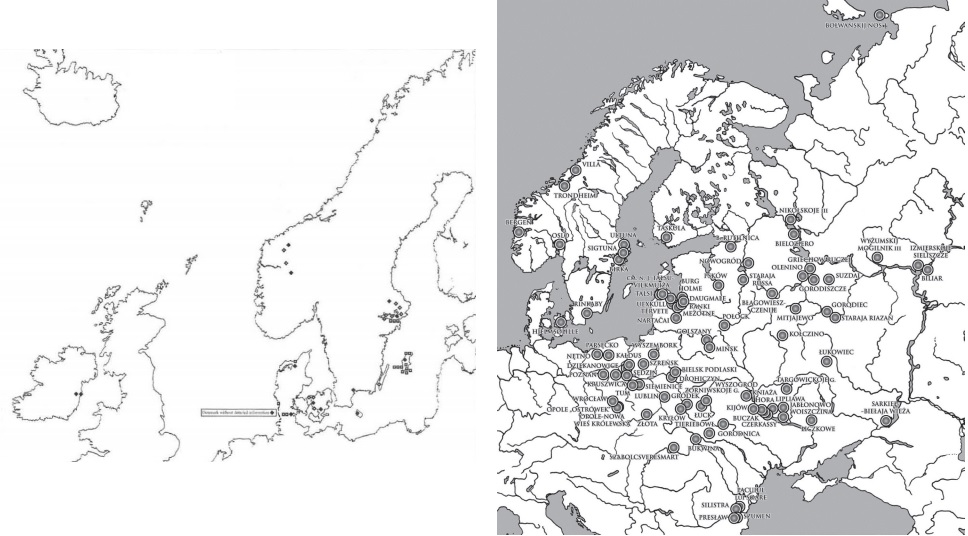 East European axe miniatures, which we will reference in this article, can be divided into the following categories (Kucypera – Pranke – Wadyl 2011: 11–26, 29):

A major group of similar items brought the interest of several researchers towards interpretation. There are already a number of conclusions, of which the most used are:

There is no doubt of the pendant function of some of the miniatures, as they are provided with rings or whole chains – though this is only the case of three miniatures (Kucypera – Pranke – Wadyl 2010: 36). It is evident that even some other axe miniatures had that function as they are very small and have a tiny eyelet. Axe-shaped pendants are known in Europe from as far as antiquity (eg. Tejral 1982: 131). At least in one case, an Early Middle Ages axe miniature is hung on a small clothing pin (Paulsen 1956: Abb. 98g) – this is very interesting detail in connection to a clothing pin from Daugmale, which also has an axe-shaped formation attached (Paulsen 1956: Abb. 99d). At least two axes without eyelets, found in female graves, were placed on chests along with other amulets and beads, forming necklaces.

The ties to Thunder deity, most often Perun, is mostly based on an ornament that can be found on the miniatures. This interpretation is problematic nonetheless and even has its critics, who call for caution (Kucypera – Pranke – Wadyl 2011: 43). The decoration basically only suggests that the miniatures might have had a decorative purpose, which is also indicated by the chosen material. Many a time it seems that the decoration only copies an ornament used on real-size axes.

More than half of all miniatures were found in hillforts, in hillfort areas or settlements. Quite a large number comes from situations without any context. It is important to note that 11 miniatures come from graves (male graves in 5 cases, female graves in 2 cases). In total, 7 are from child graves. Most often the miniature was placed at right hip, on legs, and in the case of women, also on chest (Kucypera – Pranke – Wadyl 2011: 30).

Based on the presence of axe hafts, the authors of newest catalogue suggest that such items were not meant to be worn as necklaces and were rather worn at belt (Kucypera – Pranke – Wadyl 2011: 37). In the case of some child graves, we would not be far from truth if we suggested that the miniature played a role of symbolic representation of a real axe. Miniature axes with hafts can also be found in other European regions – some were meant for wearing as a necklace, some lacked the loophole and were more suitable for carrying in a pouch.

As one can see, the listed axe miniatures make a disparate group – they are made of various materials, in a different way and are also of different shape. East European miniatures on the other hand form quite unified groups and only vary in detail. If we consider the detector finds as well, we have hundreds of miniature axes to deal with and can speak of a spread phenomenon in terms of quantity, time and geography. The idea of majority of these axes serving as offering to the dead or as a necklace is not supported in the case of grave finds, which only represent less than 10% of all officially researched specimen. We would thus like to add a few interpretations to the already listed ones, in order to attempt to make sense of the axe miniature’s purpose.

Other interpretations suggested by the author

The fact that the miniatures can be found all over Eastern Europe in the span of several centuries is a warning sign suggesting the axe could be a favoured item with practical and decorative function. We attempt to explain the frequency of finds by three additional interpretations other than a pendant or symbolic offering. 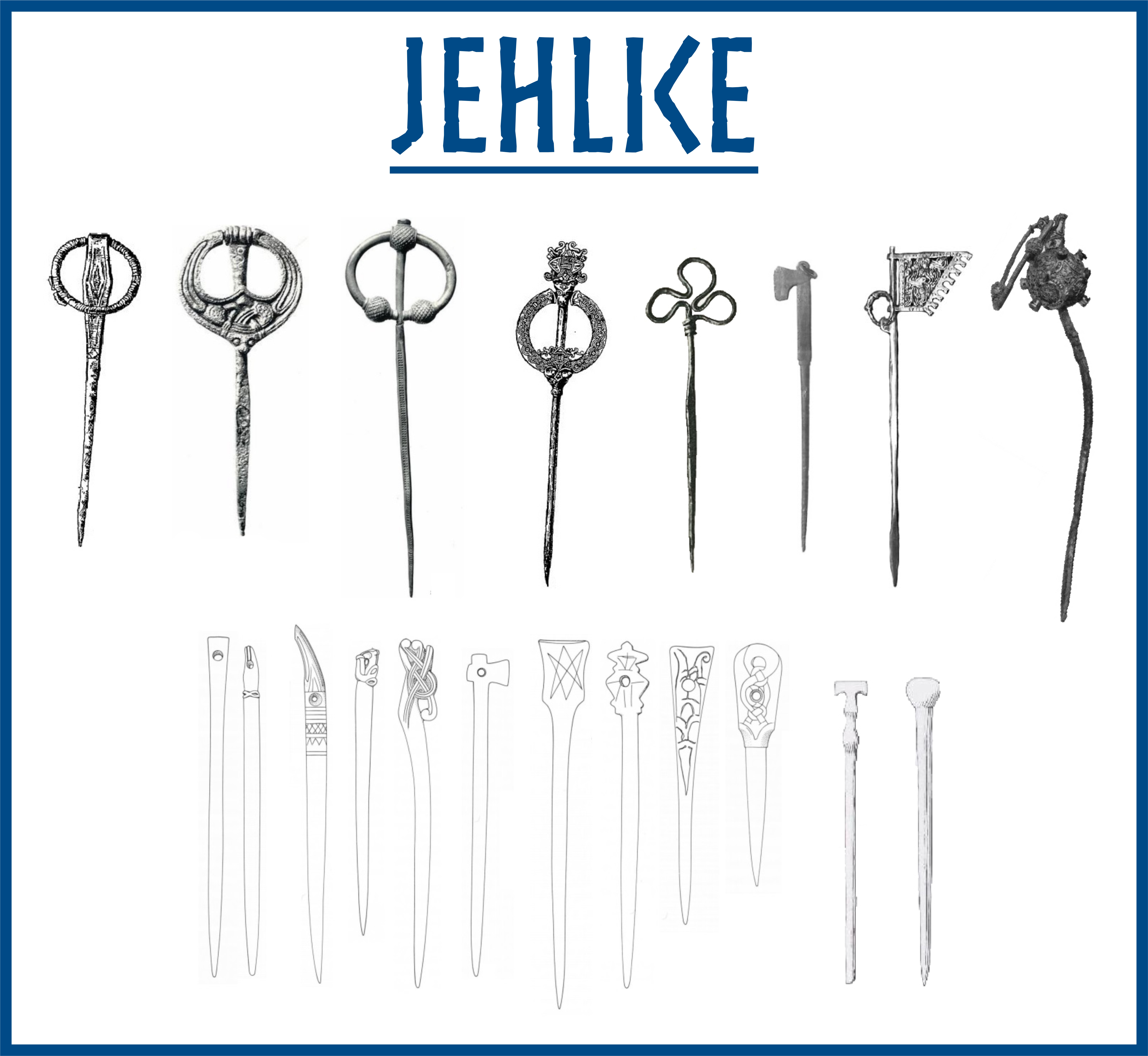 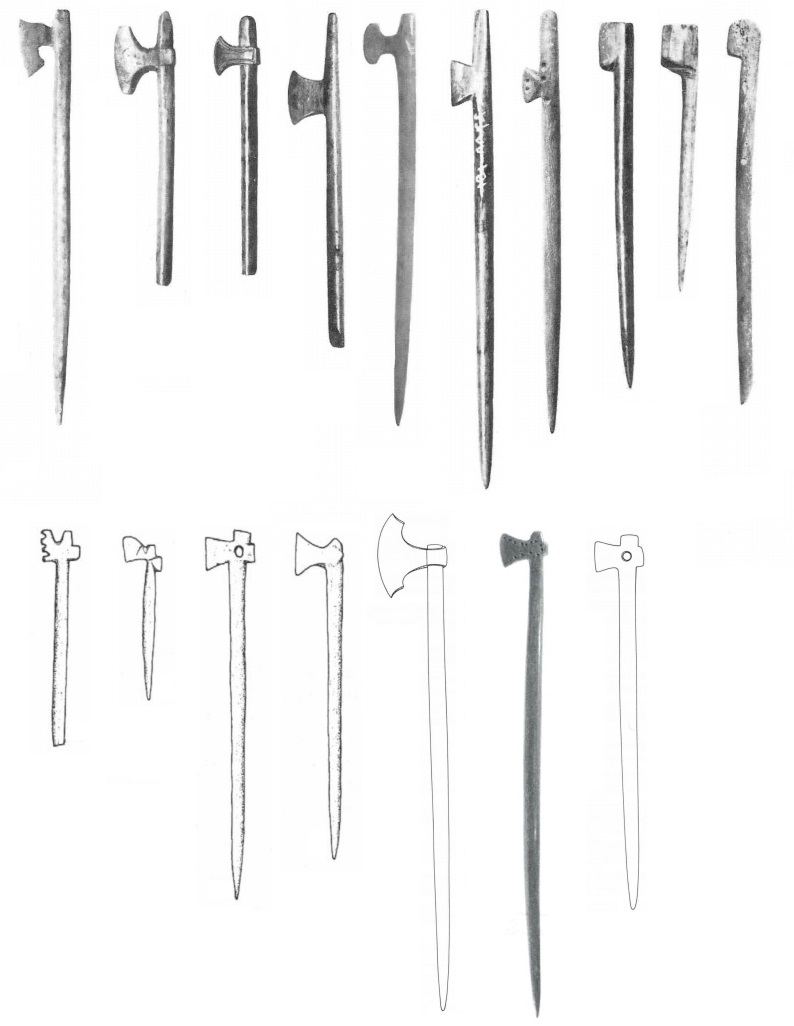 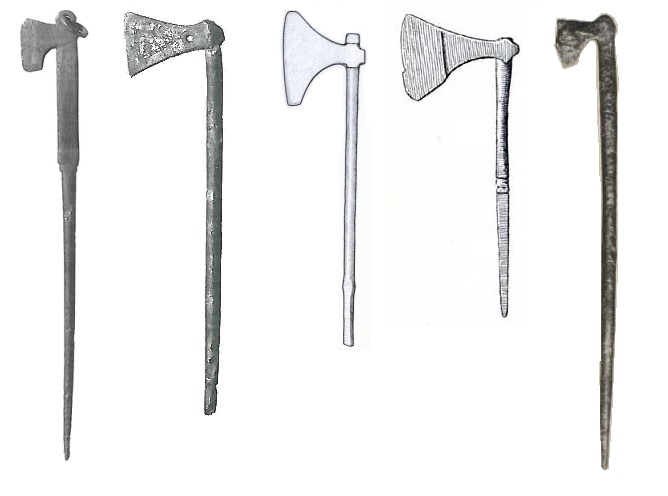 Despite the lack of valid proofs due to incompleteness of East European axe miniatures with hafts, there are several arguments supporting this interpretation: 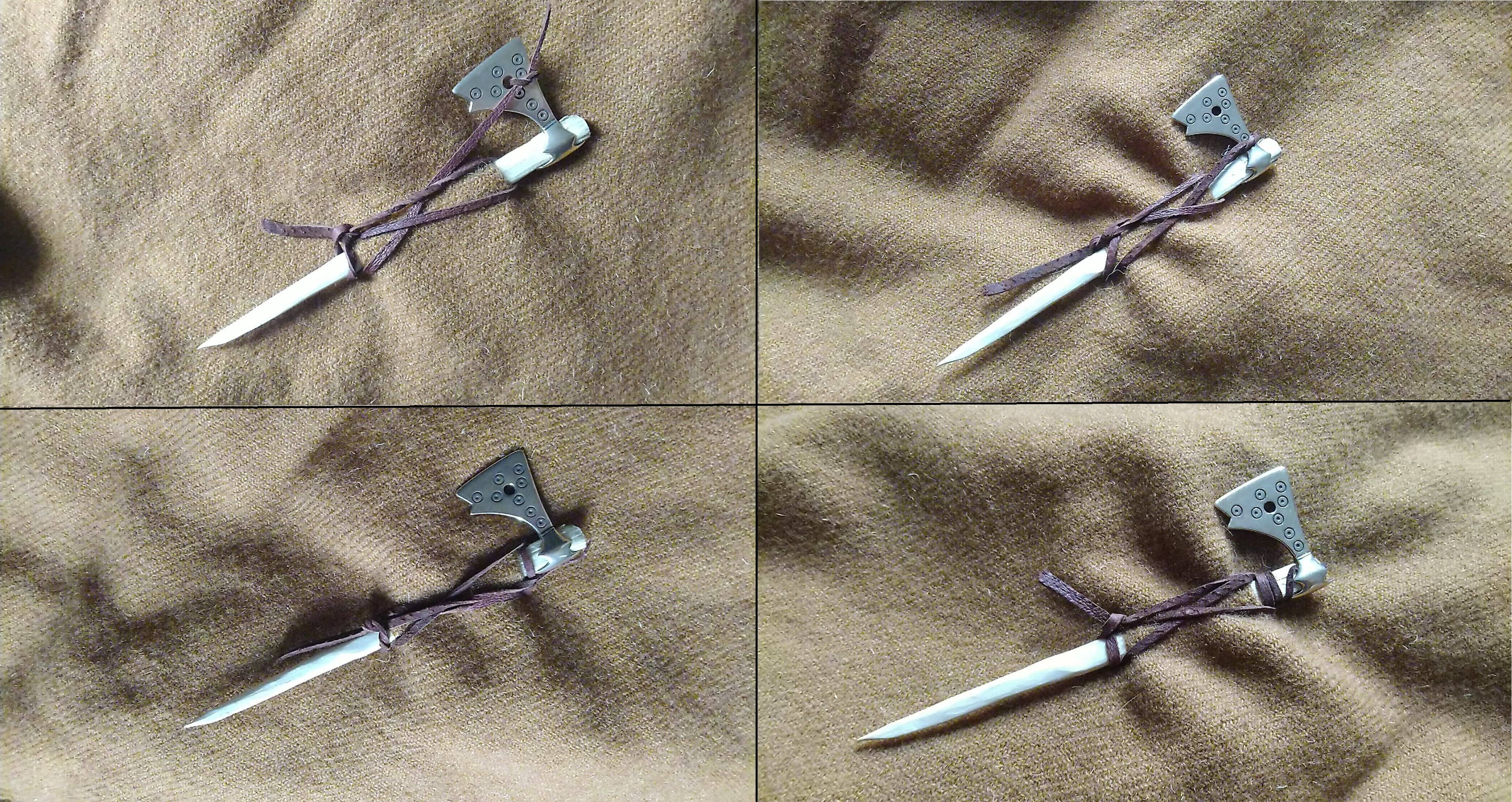 Experiment: bronze cast of miniature axe (production: Wulflund) with a wooden pin, which fixates the cloth. We tried several ways of fastening the strap, where two-point fixation on the pin proved to be the most useful.

I have presented this theory to Pawel Kucypera, author of an East European axe miniatures catalogue, who commented the experiment as follows: „I cannot rule out this possibility. The idea to compare axe miniatures with the cloak pins is interesting, but it is not possible to research this concept any further.” We thus have to wait for more miniature finds, that might confirm or dismiss this interpretation. 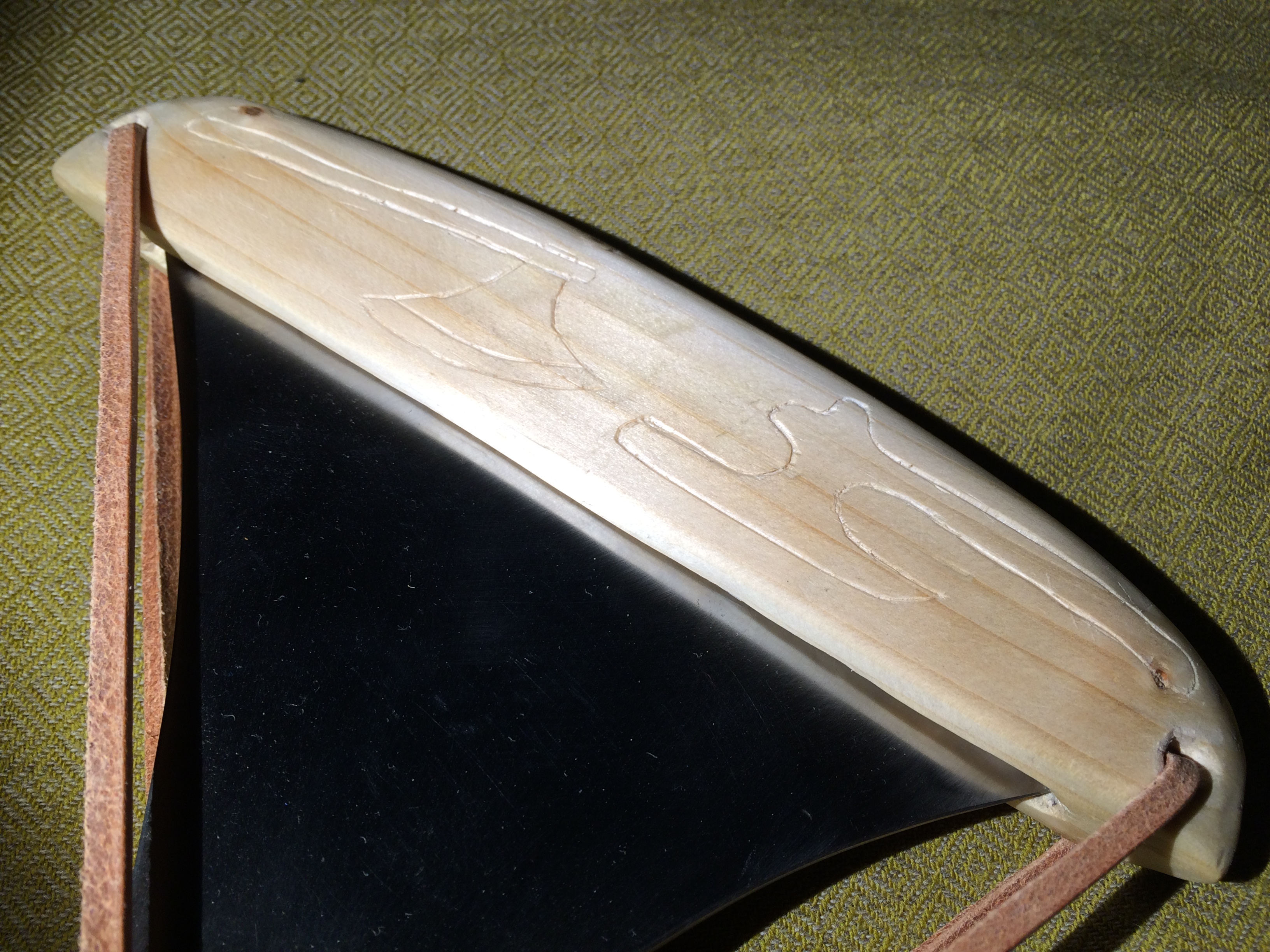 Wedge fixating a sheath to an axe-head
While this is improbable due to lack of relevant excavation situation, it cannot be ruled out that some of the miniatures with a haft could had functioned as a wedge for fixating a sheath to the axe-head. From Early Middle Ages Europe, we only know of a single such wedge, specifically from Haithabu, Germany (HbH.432.002; Westphal 2007: 55, Taf. 30:3), which was inserted to the inner side of sheath from the axe-side. Though there are even other sheaths suggesting the usage of a wedge. Specifically, we speak of sheath from Novgorod, which has holes on its tongue-like protrusions corresponding with holes of East European axes (Kainov – Singh 2016). We can thus assume that the holes found in axe heads served as a simple way of fastening the sheath, which was then plugged from side. Such an uniform solution would require a vast number of wedges, which would explain the presence of miniature axes throughout time and place. The axe-miniature shape is also appropriate for this purpose. Furthermore, as the sheath from Schleswig suggests, which is decorated by two axe engravings, it was not perceived as an issue in the past mentality if the sheath was decorated by another axe (Saggau 2006: 264; Abb. 44:13, Abb. 45). It was suggested in past that the miniatures might have had a sheath of their own, which would then be fastened to the miniature axe thanks to the hole (Makarov 1992: 37; Panasiewicz – Wołoszyn 2002: 251). This suggestion has not yet been confirmed though. 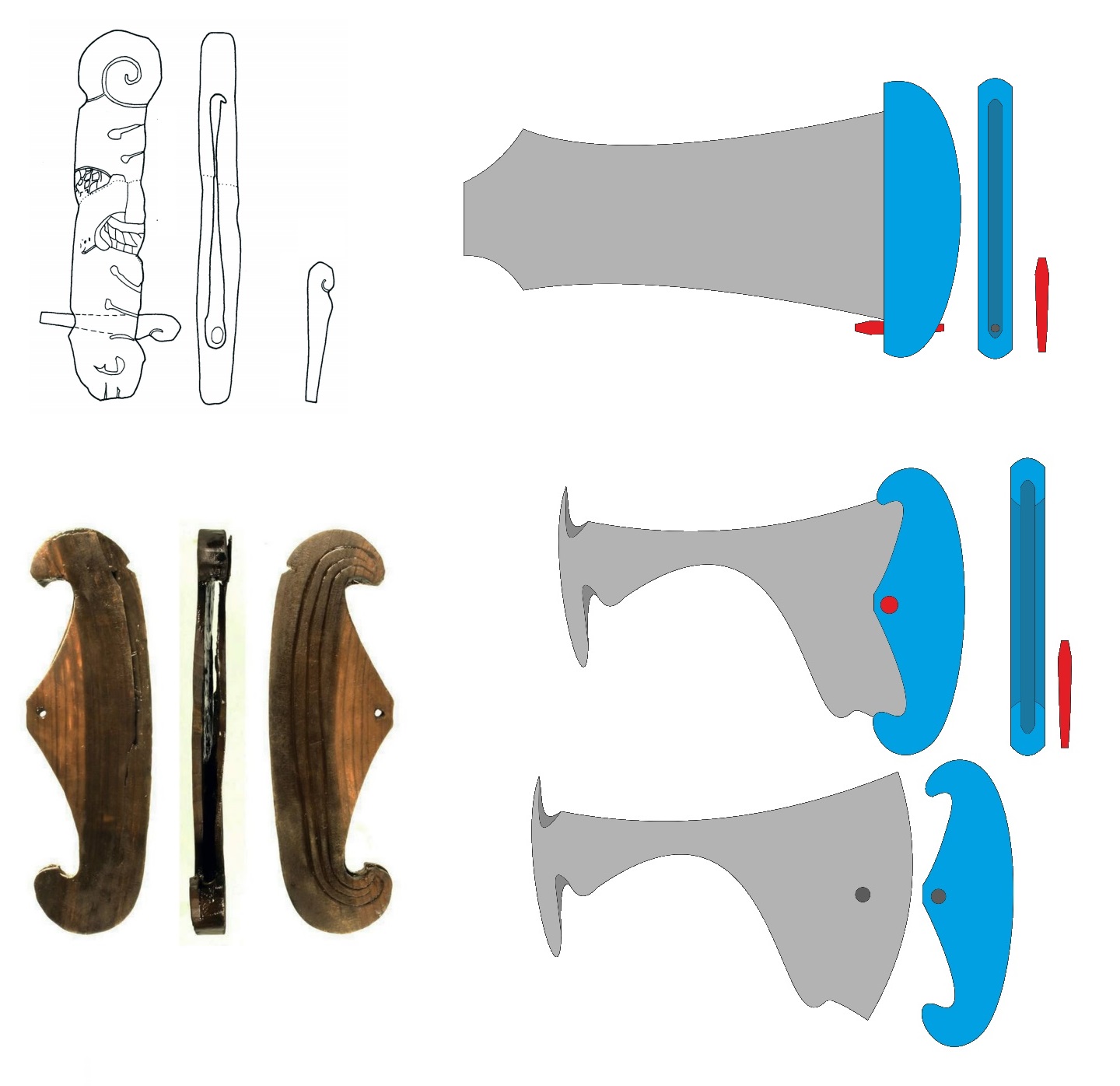 Votive gift during colonisation
In 11th century we have witnessed major changes in Old Russian settlement towards previously uncolonized areas. Old settlements ceased to exist, resulting in creation of dense network of small cities and villages in castle areas. Thanks to their newly gained economical and political potential, these aimed for independence and attempted to break out of the Kievan rule (Kotyčev 2016: 246–248). The epoch is sometimes called as “era of small cities” (эпоха малых городов) copies the usage of axe miniatures in Eastern Europe.

From other parts of Europe, we know that the Early Middle Ages axe as a tool played a major symbolic role in the cultivation of land, and it was not uncommon that when a new land was being settled, the settlers would light a bonfire or would bury an axe in the ground as a symbolism for bringing order (Starý – Kozák 2010: 44–45). Furthermore, axes had been buried as early as late Neolithic era to define estate boundaries with the purpose of protecting it from disruption (Rønne 2008).

We should not forget that majority of the axes were found around small cities, settlements or villages. The phenomenon of miniature axes in Eastern Europe can thus be connected to inner colonisation and the transformation of estate structure of 11th – 13th century.

In this article we took a deeper look into the phenomenon of miniature East European axes, in order to bring it closer to re-enactment community. We have discussed a great deal on the possible functions of the item. Our suggestion is that the geographical and time-related expansion reflects its practical use. We assume the following functions:

These functions can thus suggest that the miniature axes played important roles in the life of their owner, a role that could change in the time and contect:

Let us conclude the article here. Thank you for your time spent reading it and we look forward any and all feedback.