At the end of July 2019 I was contacted by a Danish collector who wanted to consult a few pieces of early medieval axes before a purchase. He bought the axe described below from a private collector in Germany on my recommendation, because in my opinion there was the lowest chance of a forgery. If it was indeed a forgery, it would be extraordinarily well manufactured and its making cost would probably exceed the auction price. In August of the same year the axe has been lent to me for documentation, for which I sincerely thank the owner! 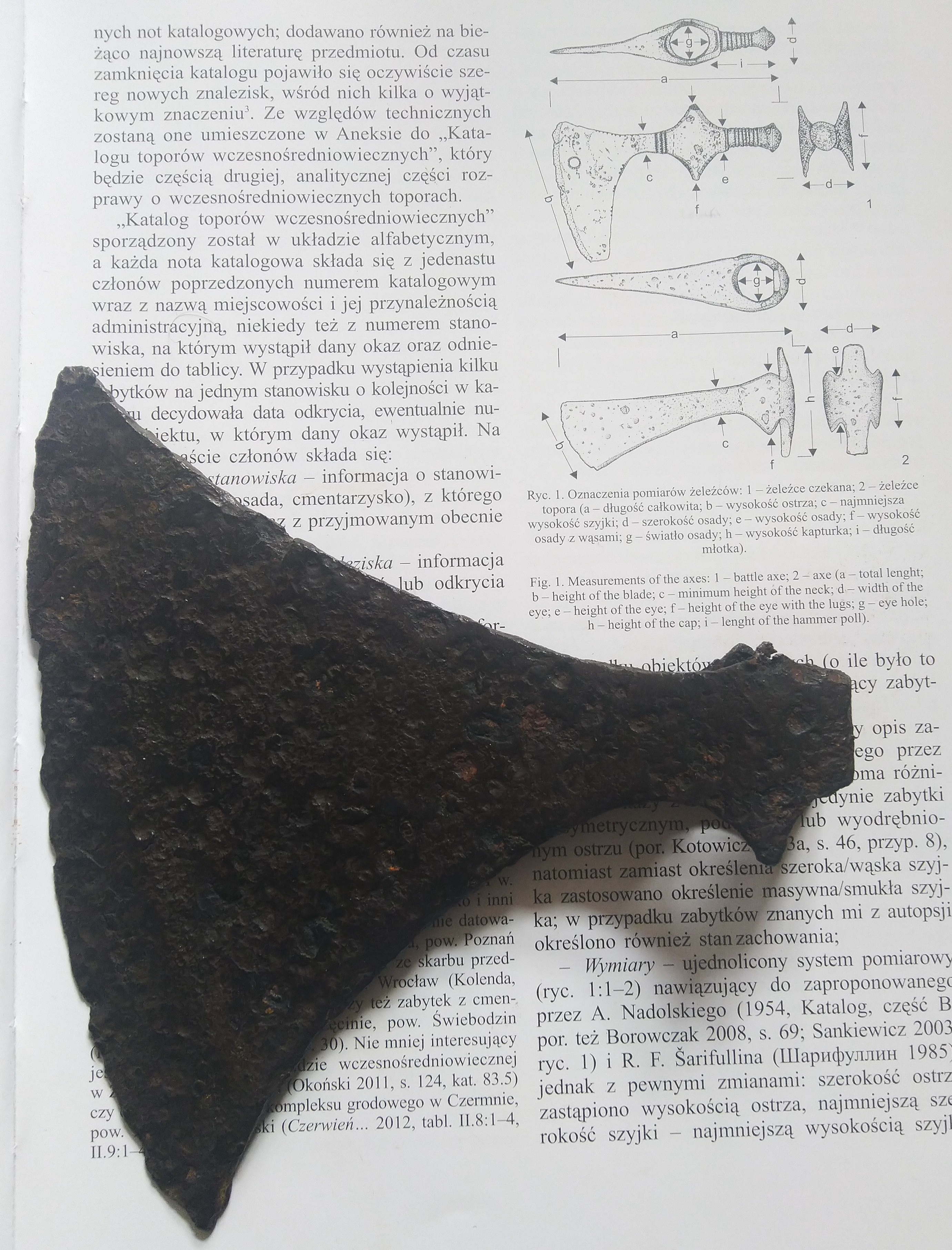 A brief description of the artifact

In our hands there is an exceptionally well preserved axe head which can be assigned to Petersen’s type M (Petersen 1919: 46-47), more specifically to its M1 subtype (Atgāzis 1997: 56), most precisely to Kotowicz’s type IIIA.5.3 (Kotowicz 2018: 85-87); it is therefore a wide axe head with the shaft part furnished by thorns on both sides and having a flat butt from the overhead view and straight from a side view and a blade that is not shaped into a beard. It is a very famous and historically popular type of battle axe, during the period of 10th to 14th century spread from Ireland to Russia. As reported by the collector, the artifact comes from a private collection in Munich, to which it got after being randomly found in Kaliningrad during the 1980’s. According to knowledge of its origin and analogies the axe can be dated to the 11th or 12th century (Atgāzis 1997: 56). In the Baltic area it is a popular militaria known from Latvia (250 examples, Atgāzis 1997: 53), Estonia (at least 18 examples, Atgāzis 1997: 1. att), Lithuania (at least 13 examples, Atgāzis 1997: 1. att) and the Kaliningrad region (at least 8 examples, Kazakevičius 1996: 234).

The object appears compact, only the thorn tips are fragile and there is a risk of their breaking. The surface, including the top as well as the bottom side, is furrowed by corroded dents. Blade’s surface and the inner part shaft hole are showing marks of rust. At a few spots of the shaft hole there are probable imprints of wood which had long fibers, seemingly coming from a broad-leaved tree. It is at least noticeable that the axe was thoroughly cleaned on its face sides and it might have been treated with a lacquer. It is not possible to estimate an exact process of manufacturing by plain observation, however it is probable that the weapon was made from a more malleable iron ingot with a steel plate welded on its front part, where the edge was then formed. That is evident from a characteristic raised profile of the blade as well as from the corroded cutting edge. The process of creating the shaft hole is disputable – it might have been made either by splitting, puncture or bending (Kotowicz 2018: 25-27). My personal opinion, which is based on poorly visible layers on the upper and lower side of the neck, the asymmetrical thickness of the shaft hole’s walls and a the blade’s slight inclination to jut out of the axis between the middle of the butt and the edge, is that the loop was made by bending, therefore the Kotowicz’s variant no. 5 (Kotowicz 2018: 27).

The connection to the M1 subtype is assumed by the analogies from the Baltic assemblage: the M1 subtype has a neck width of 20-25 mm, butt width of 20-25 mm and butt thickness up to 7 mm, as distinct from the M2 (25-35 mm neck width) and M3 (35-50 mm neck width) subtypes (Atgāzis 1997: 56). However, an raised profile of the welded edge is more typical for M2 subtype axes, possibly suggesting broader dating. With its parameters this axe fits well among its Baltic counterparts. Baltic axes are 125–235 mm long and 120–225 mm wide (Kazakevičius 1996: 233), while Polish axes are 136–210 mm long and 110-206 mm wide (Kotowicz 2014) and Russian ones are 170-220 mm long and 130-200 mm wide (Kirpičnikov 1966: 39). Speaking of its weight of 333 grams, it is not in accord with the axe’s original form, where it might have been heavier even by one third. Baltic axes rarely weigh more than 500-600 g and tend to be lighter, roughly about 400 g (Atgāzis 1997: 55). Similarly it is for Russian (200–450 g; Kirpičnikov 1966: 39) or Polish axes (100–450 g; Kotowicz 2014). With the shaft having to be very thin and therefore lightweight due to small dimensions of the shaft hole the whole weapon’s weight was definitely less than 1 kg. The shaft could probably be about 80-120 cm long with the axe being put on from above instead of from below (as it is usual for this type of axes), therefore the shaft was slightly wider just below the axe head. It is a masterfully constructed weapon, where the material is spread perfectly and efficiently so it has not a gram to waste and the quality material on the edge is held by the rest being of lower quality. Especially in this construction we can see the reason why this weapon remained in use throughout four centuries. The weight and size of the weapon allows ideas it was a multifunctional weapon serviceable by one or both hands as needed. 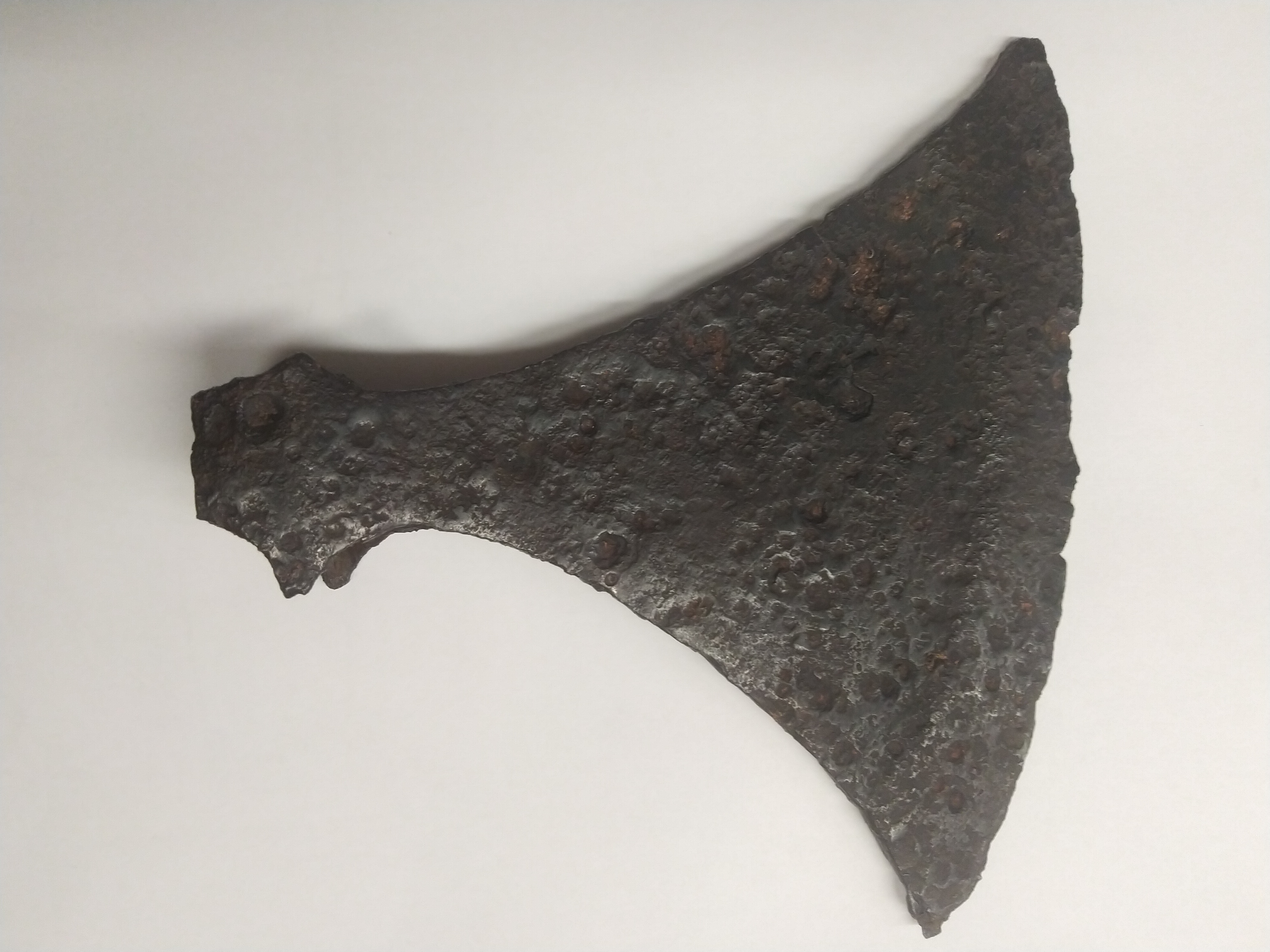 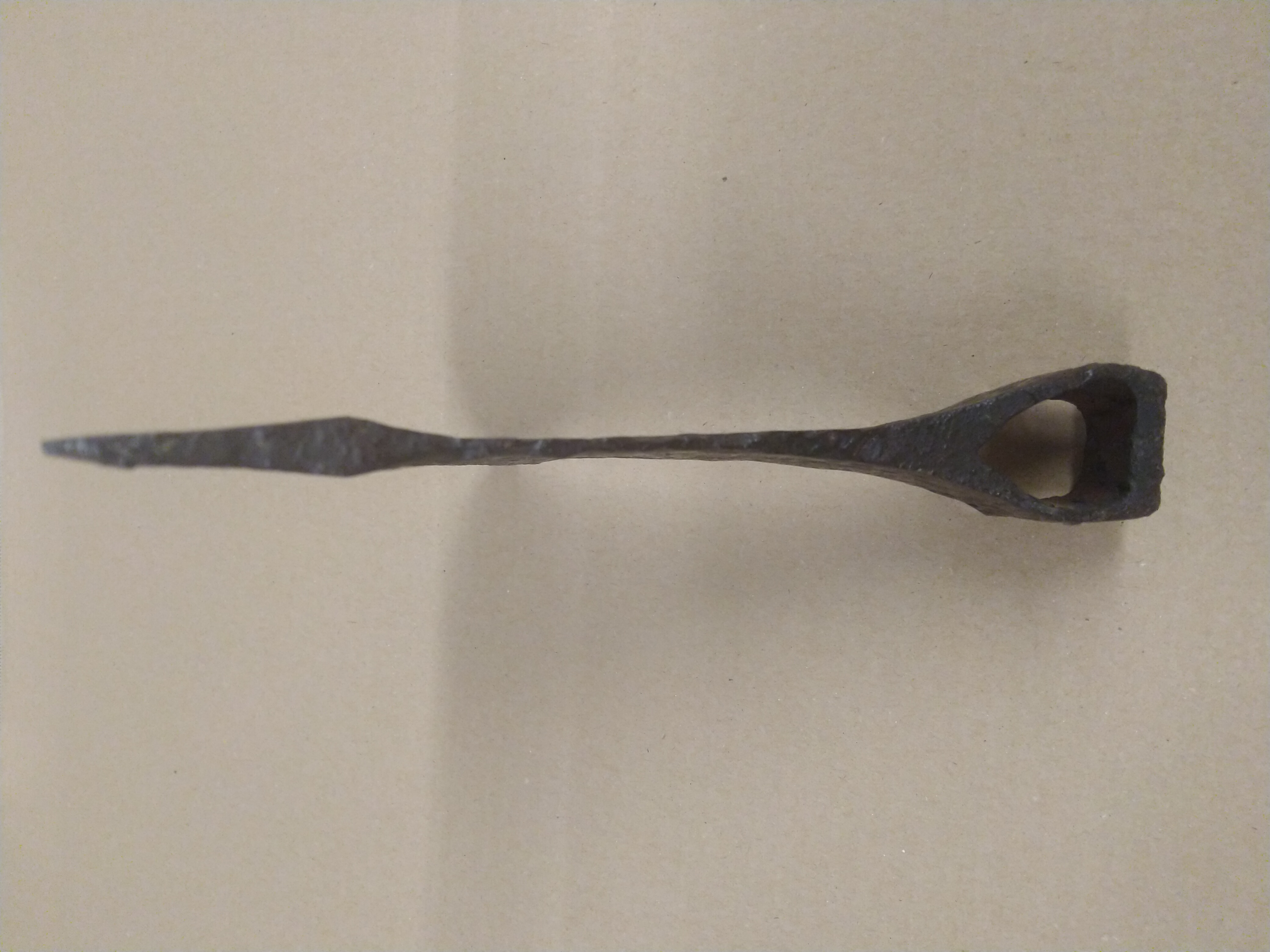 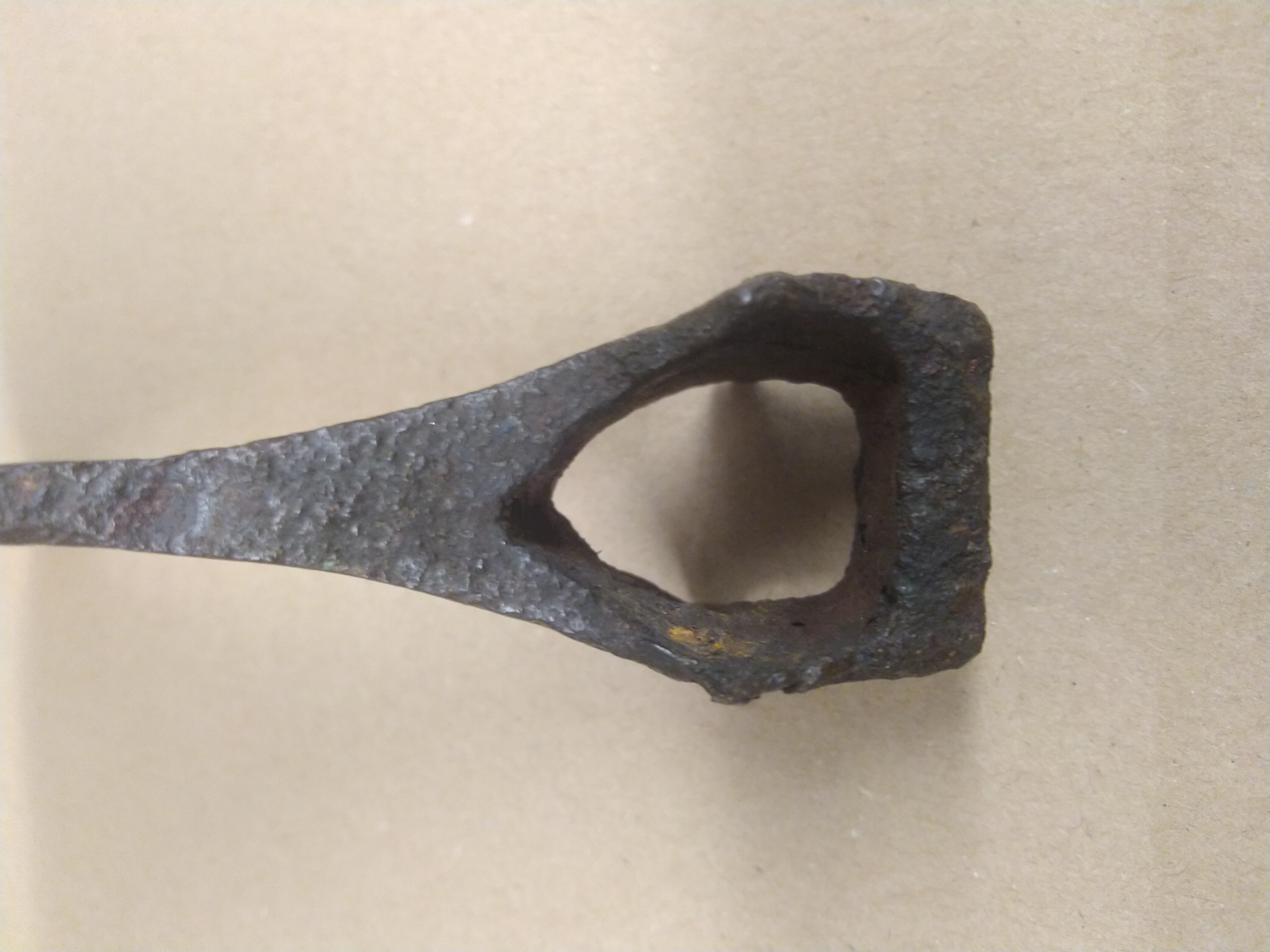 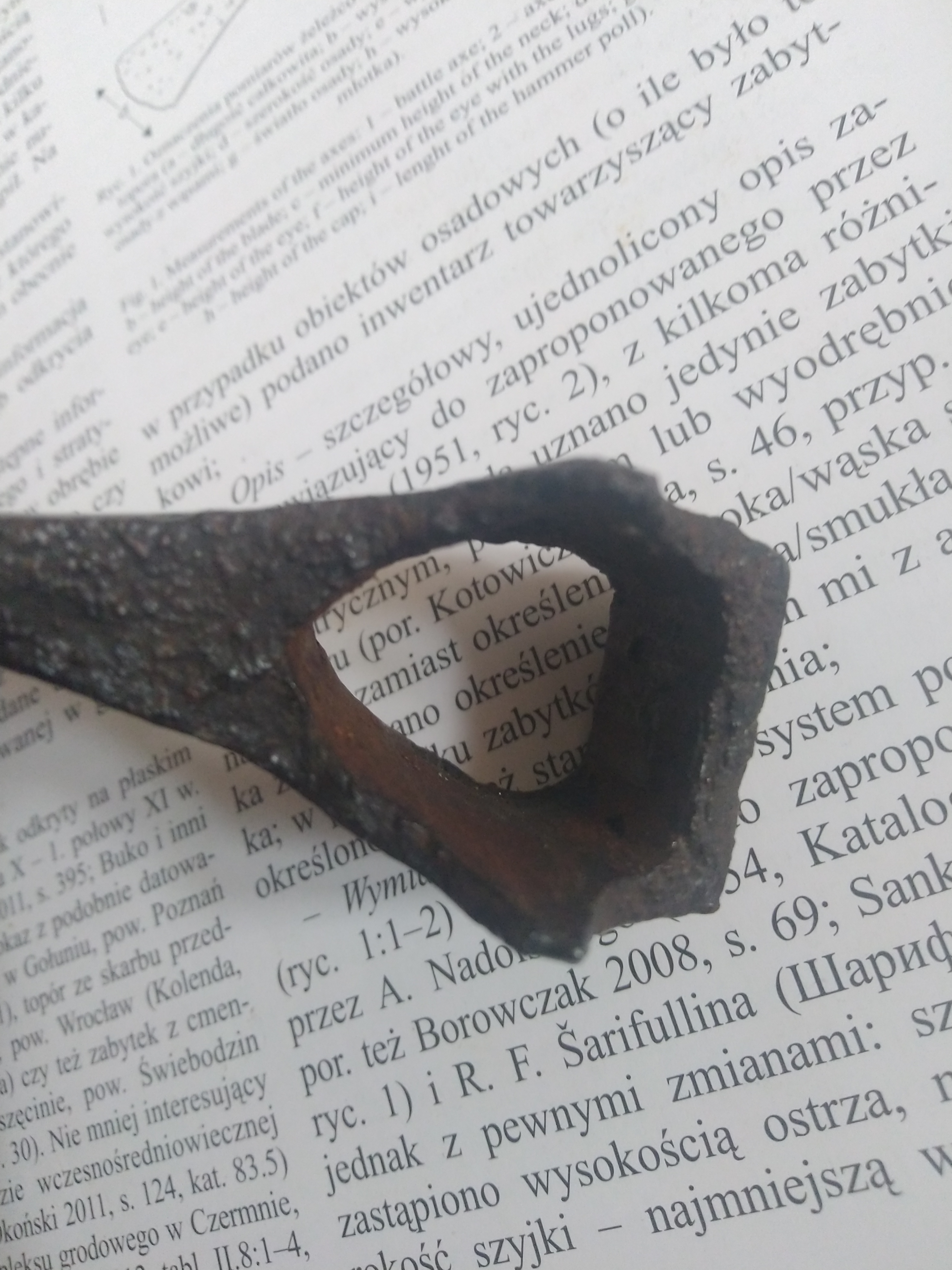 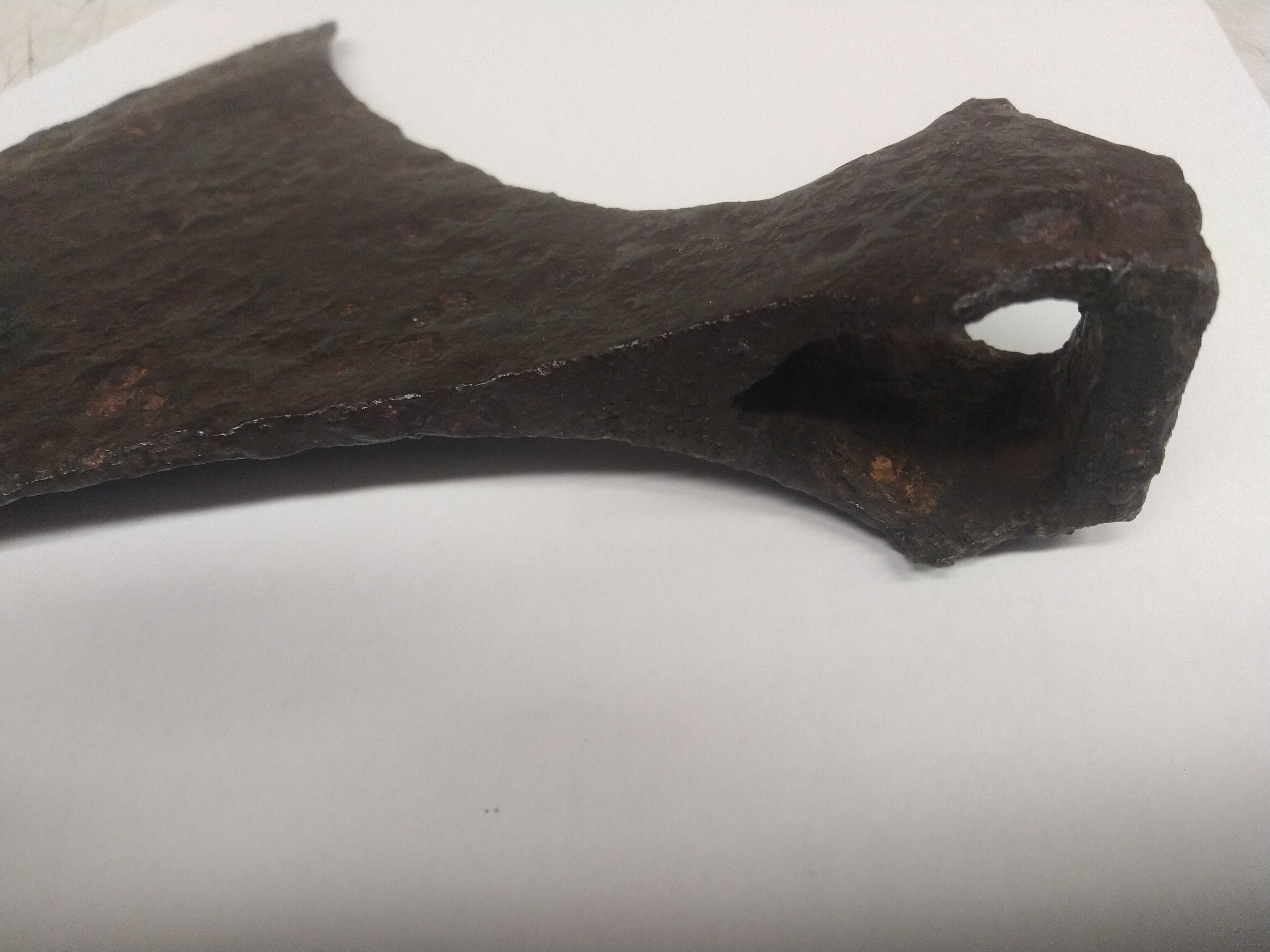 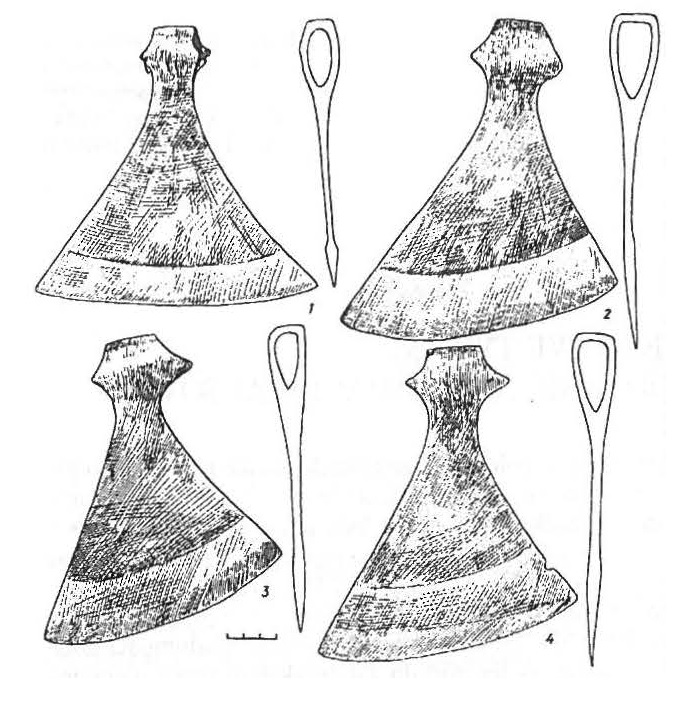 X-ray images and their evaluation

At the beginning of this year this axe has been introduced to Ing. Jiří Hošek Ph.D. from the Archeological Institute of AV ČR, which is a leading Czech authority in the field of medieval metallurgy. As a part of our meeting we conducted a cursory investigation as well as X-ray imaging. Mr. Hošek agrees with the description and does not consider it a forgery. In his words it complies with the parameters of medieval axes.

The X-ray images were taken by the Comet MXR-225HP/11 device. We focused on the shaft hole area and the edge, as we expected finding marks that suggest welding. However, the only weld mark was found in the shaft hole area, which confirms the assumption that the loop was created by bending and not by puncture. There are no marks of this weld on the side and none appear on the edge either. Mr. Hošek assumes that the edge was definitely welded. There might be several reasons for the welds not being visible – as Mr. Hošek remarks, the X-ray is unable to detect the welds themselves, only the lines of admixture enabling the radiation to permeate more easily. The fact that these lines are not visible in case of this axe might be caused by the combination of quality craftsmanship, good preservation and the geometry of the weld not being executed in a single line. He adds that if computed tomography or invasive methods were used, the result might have been more apparent.

Aside from the weld in the loop area we noticed two more curiosities – in the upper part of the blade there was a crack extending from a dimple on the upper edge, probably created by a hard blow. The second curiosity is the fact that the lower tip tends to bend in spiral when compared to the axis between the middle of the butt and the upper tip. Also it seems that the shaft hole is slightly conical when viewed from the side.

Thanks to Ing. Jiří Hošek Ph.D. for his kind reception and scholarly counsel. 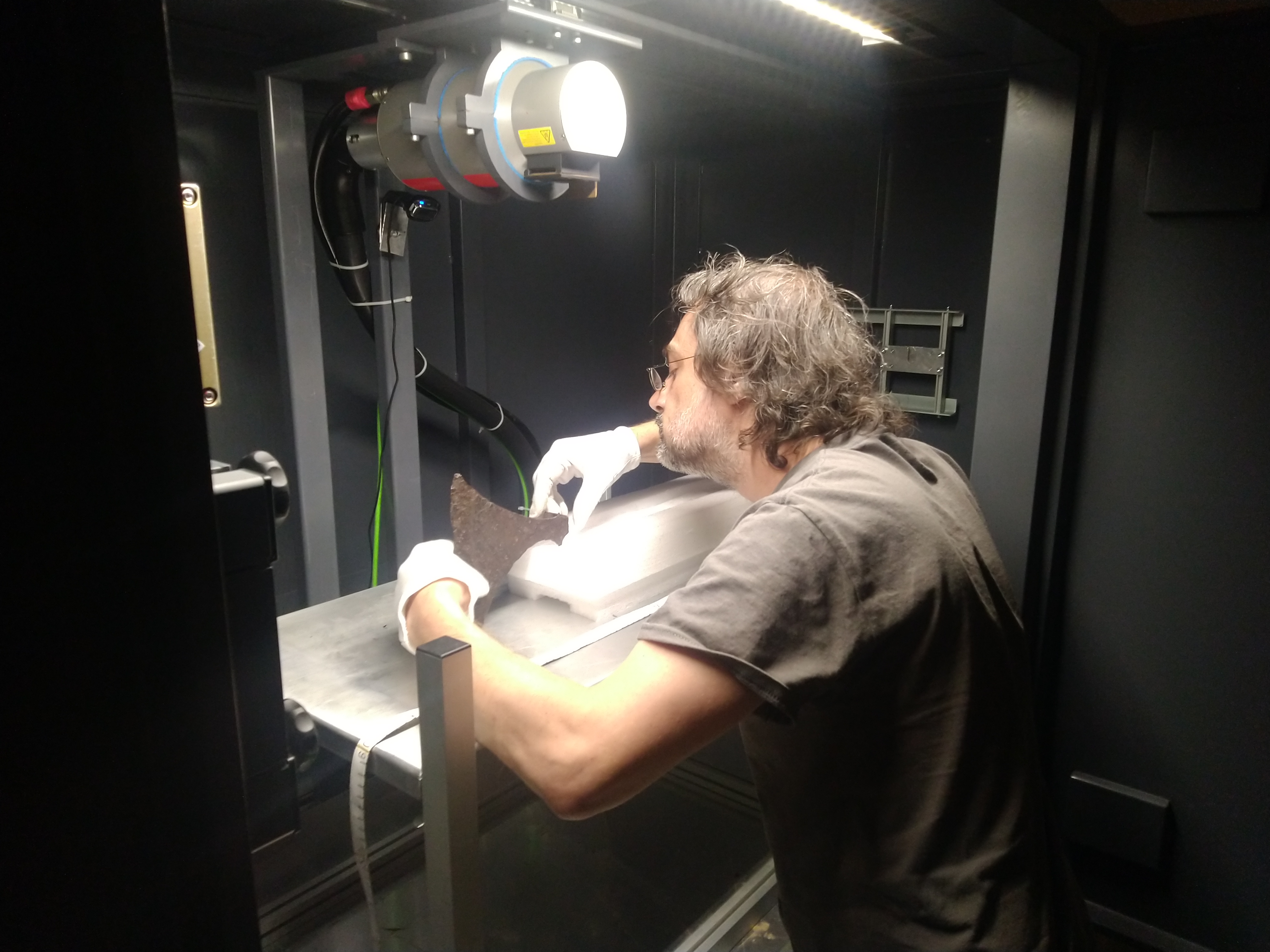 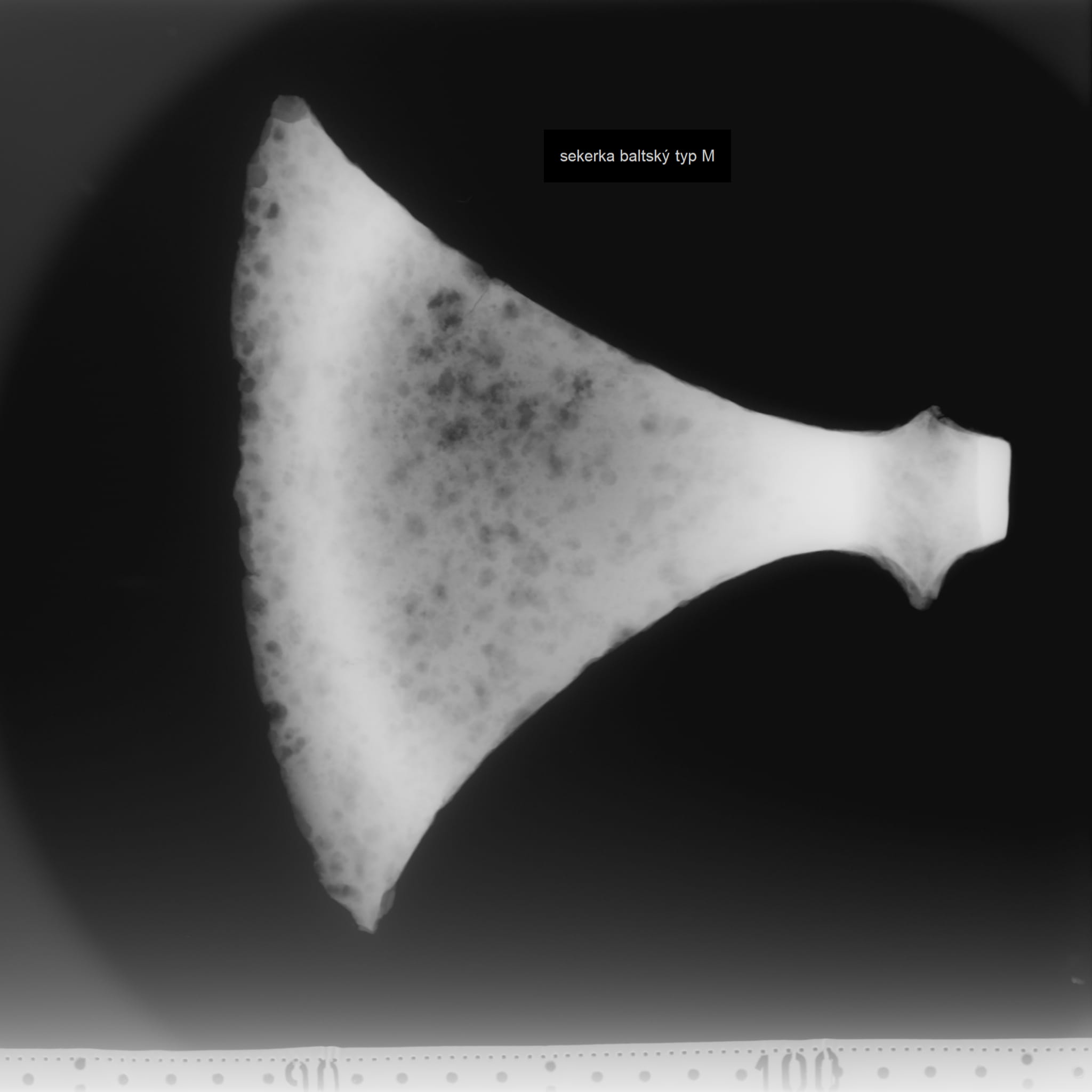 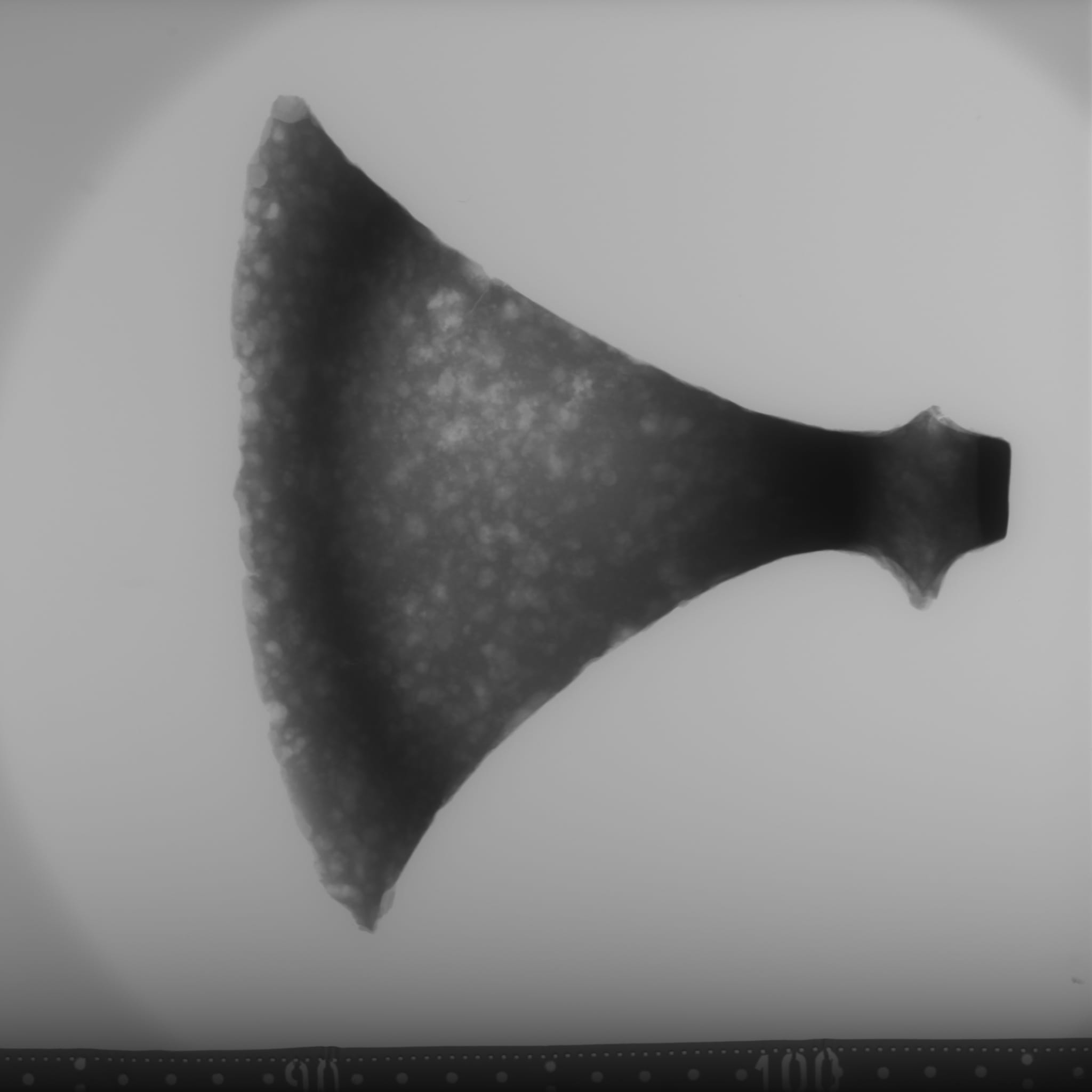 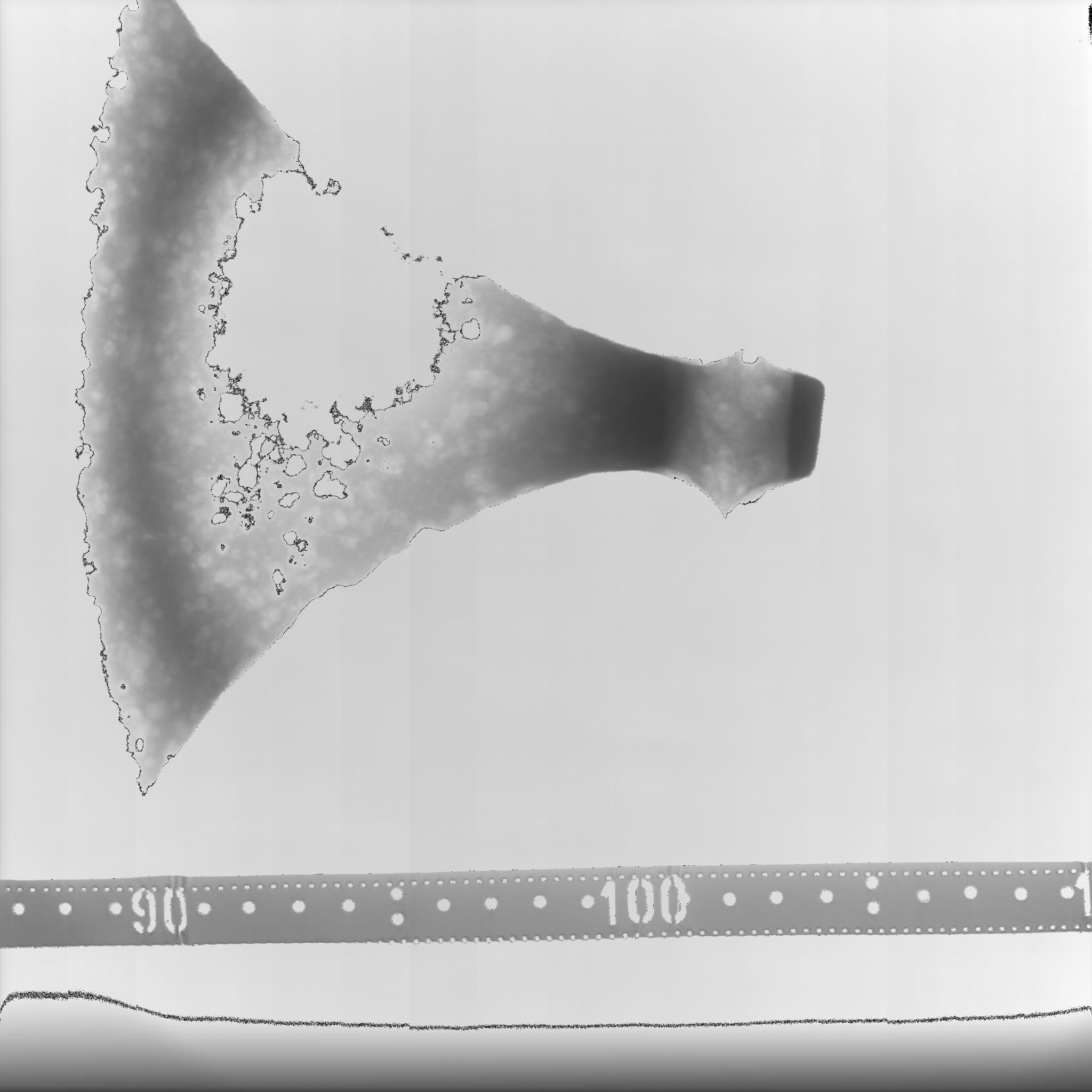 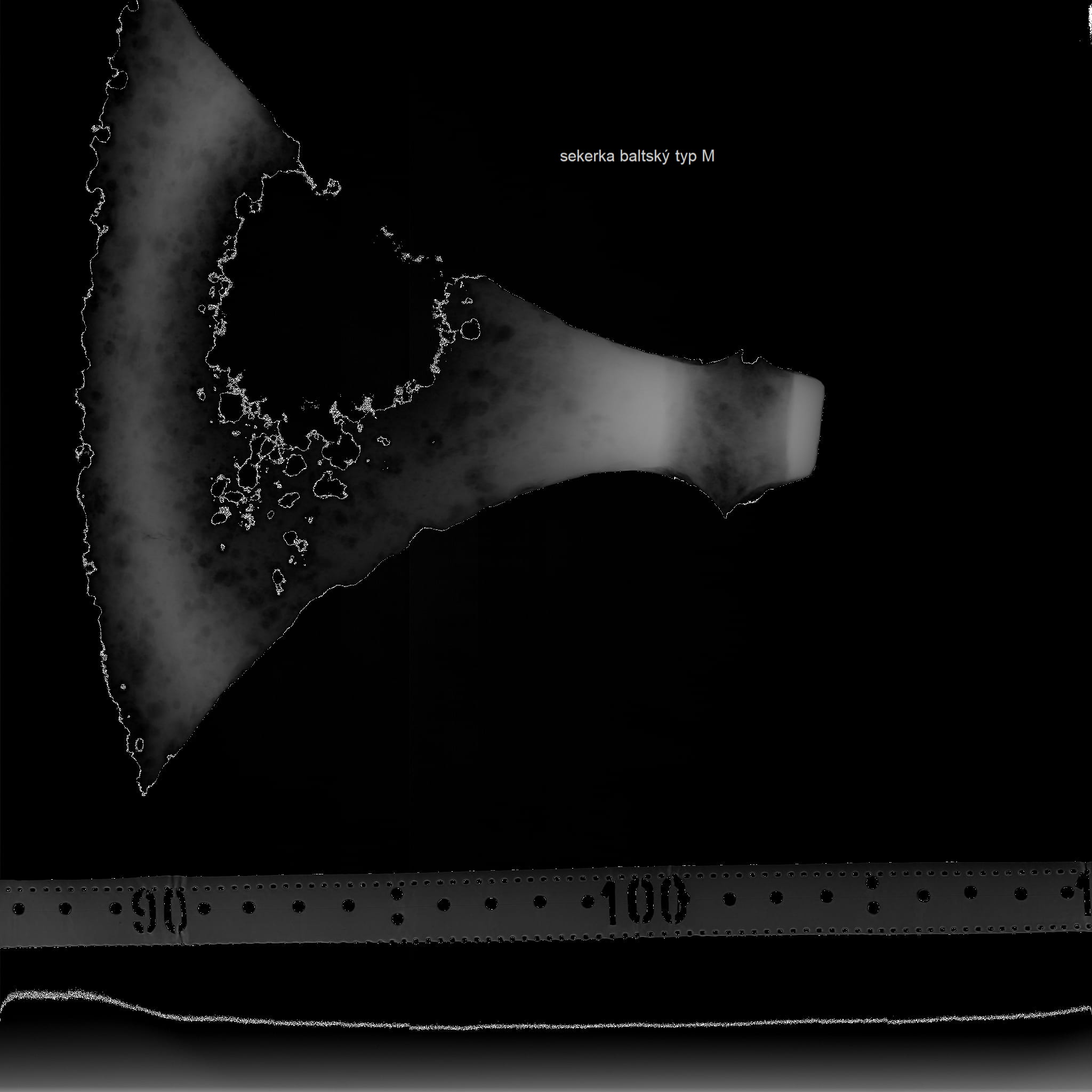 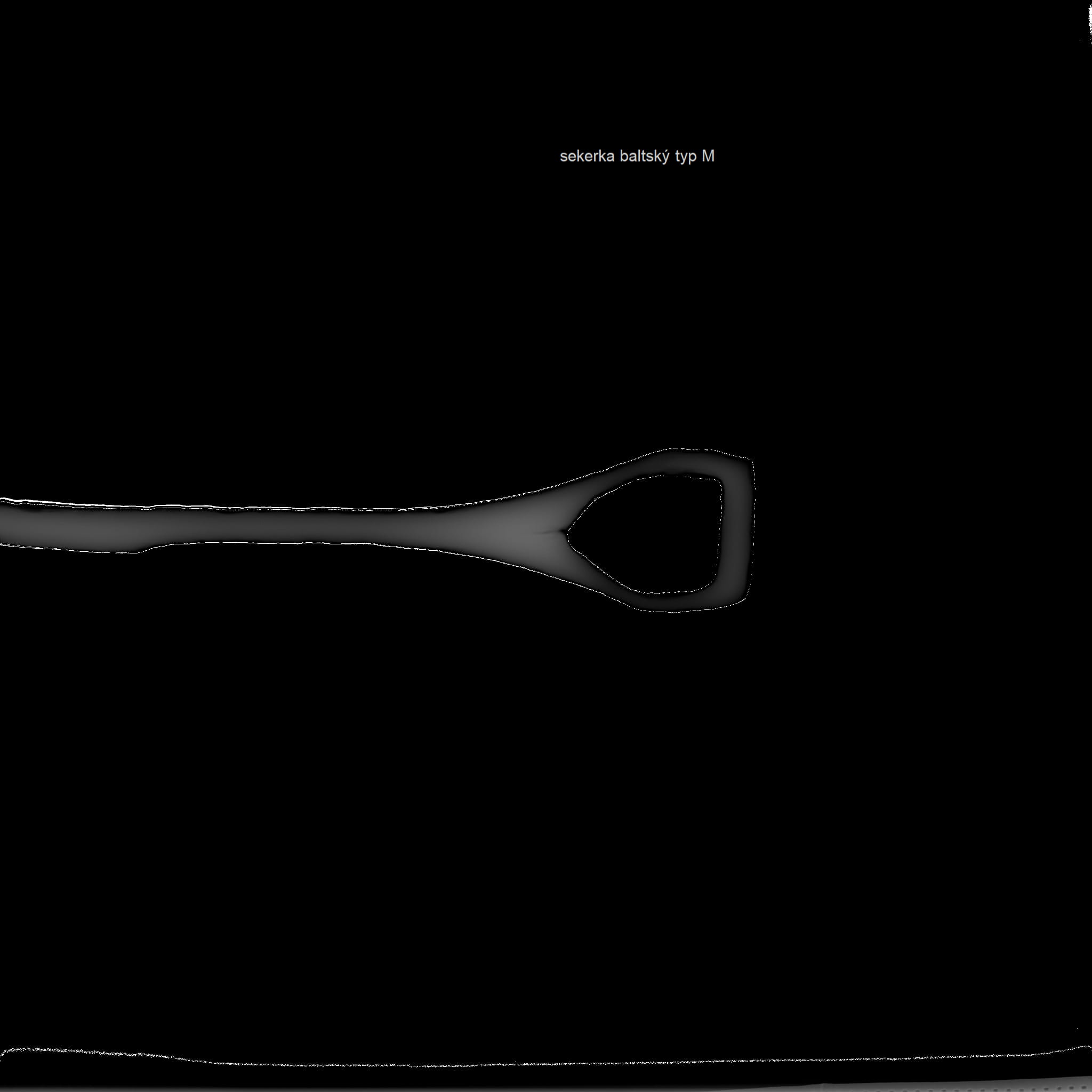 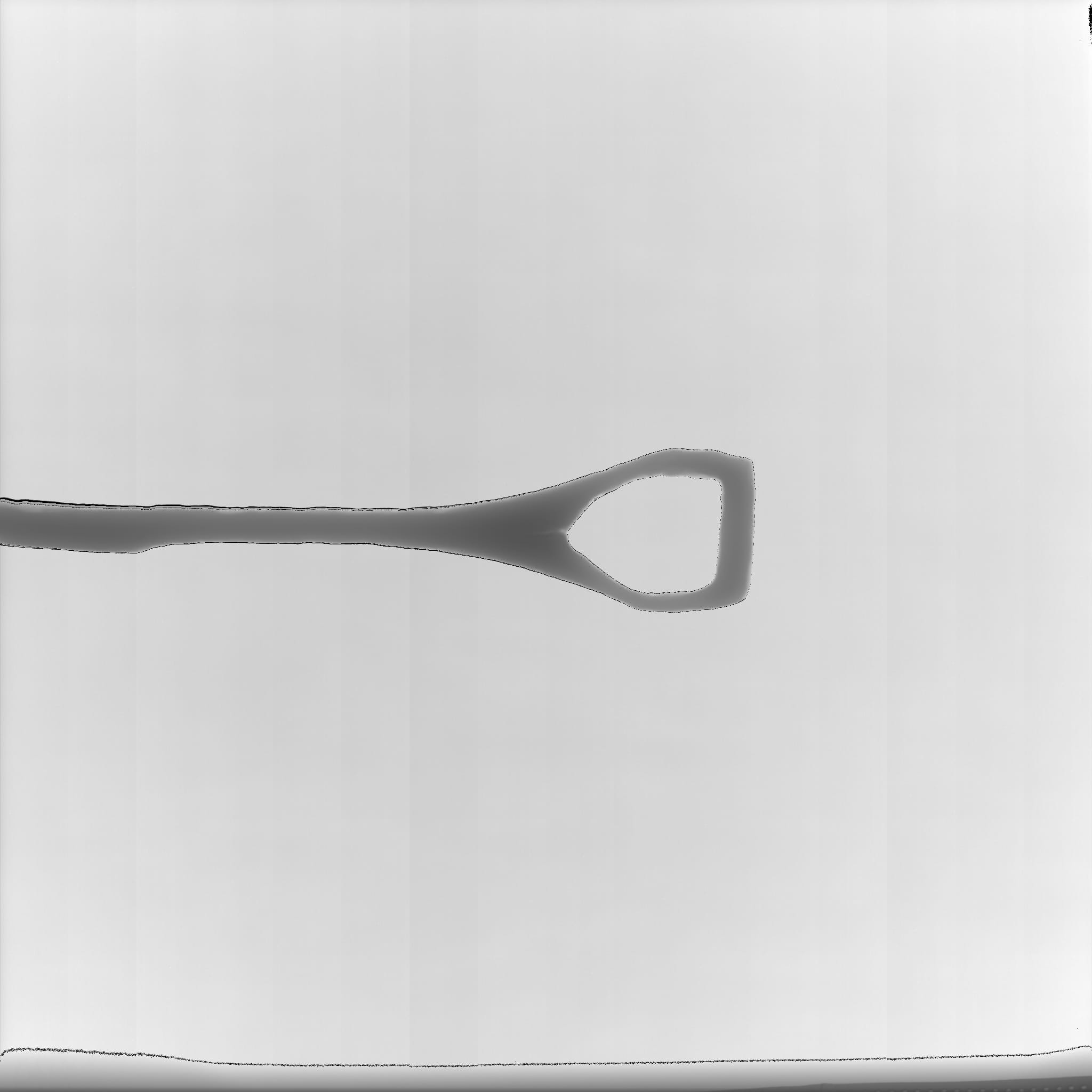 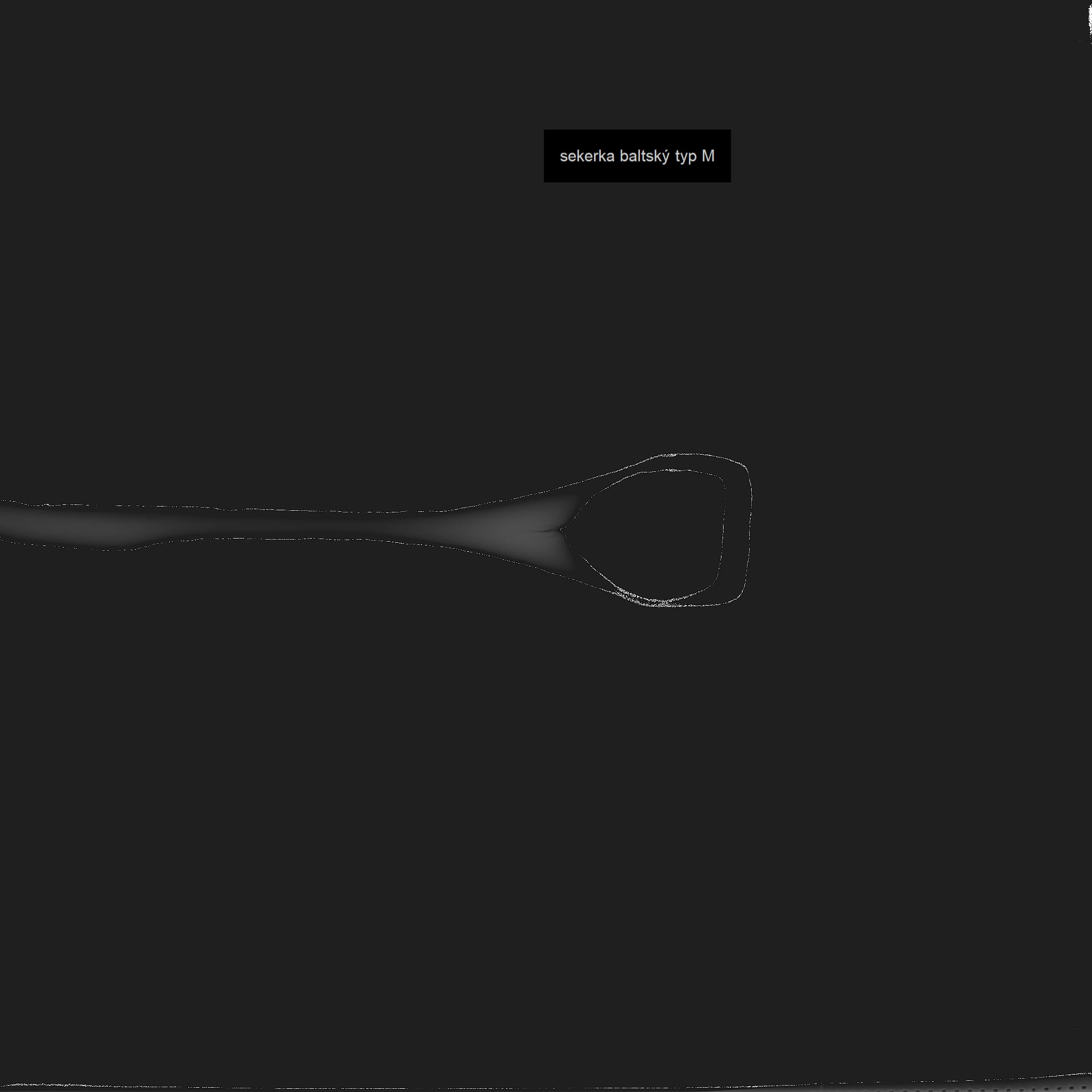 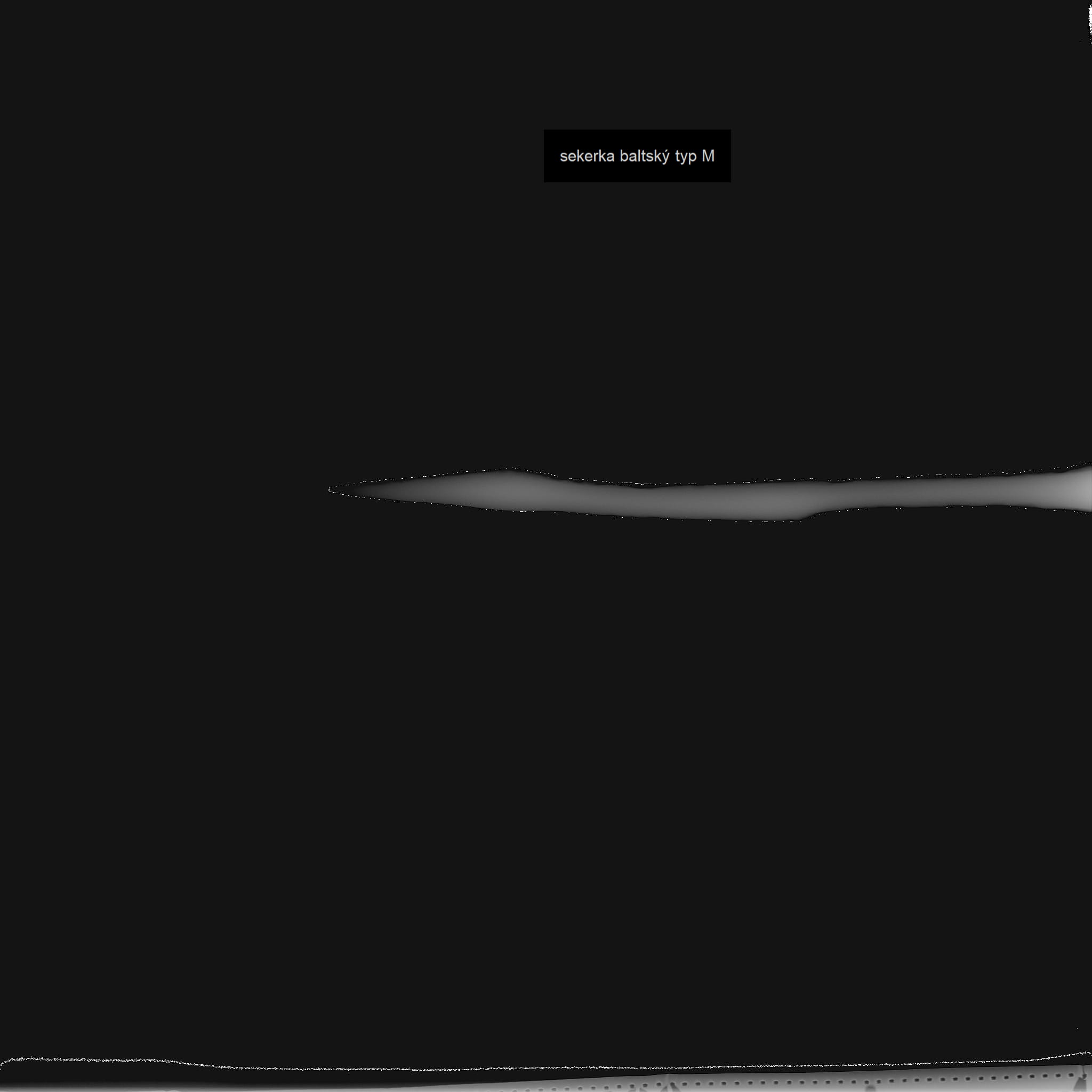 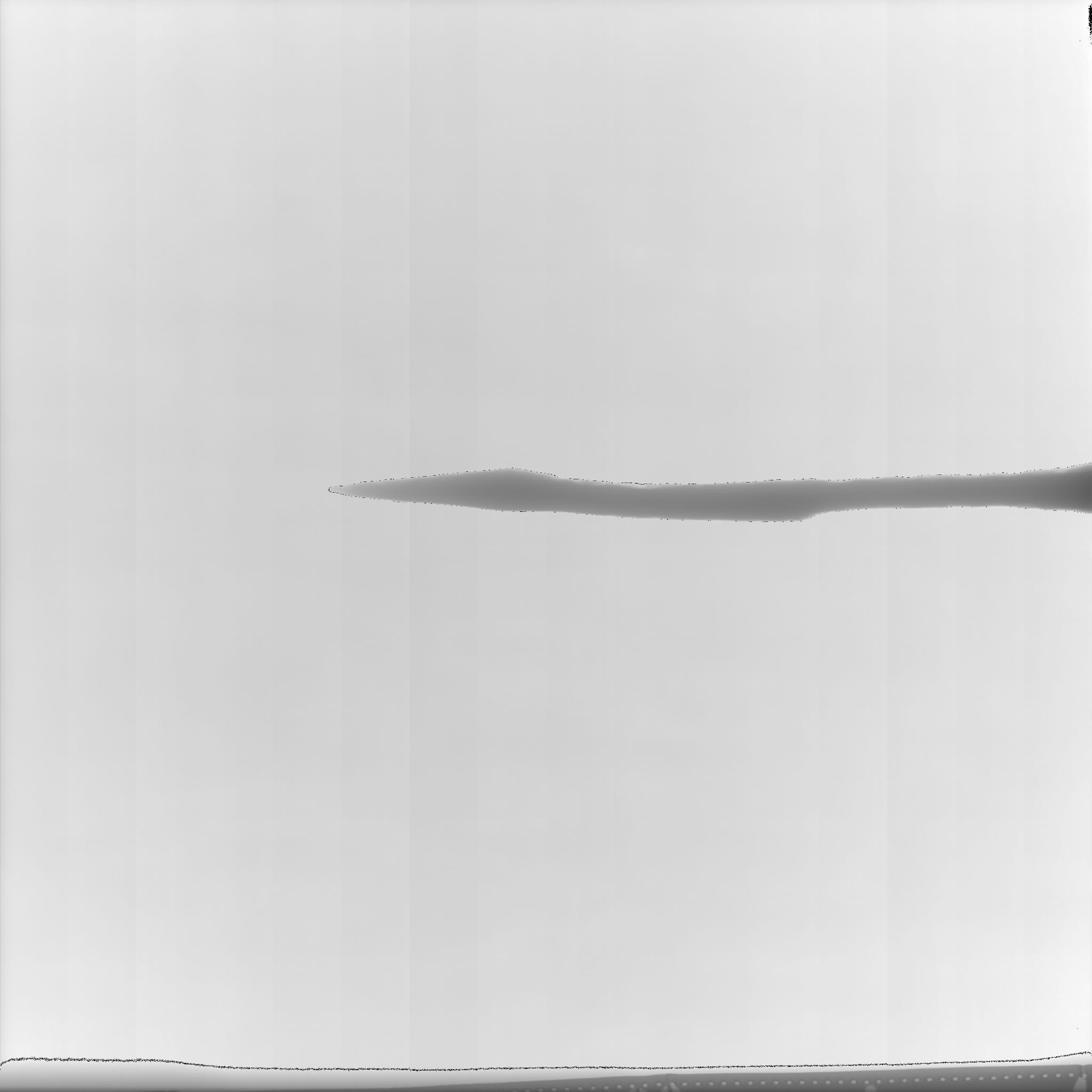