There are some “truths” in reenactment that are not questioned even though they should be. These are called “reenactorism” and engaged by both newbies and veterans. In this article we will show one of these, the myth of a long belt in Early medieval Europe, following the work done by German reenactor Christopher Kunz.

It is fully evident from the preserved material that there was a number of approaches to belt wearing in the Early Middle ages. These approaches originated alongside cultural environment and local development, social ranking, gender and usage method. The assumption of using a uniform belt type with the same width and length is wrong. On the initiative of beginning reenactors who often raise questions about belt length, in this article we will try to map the legth of men’s leather belts according to iconography and finds in burial complexes. 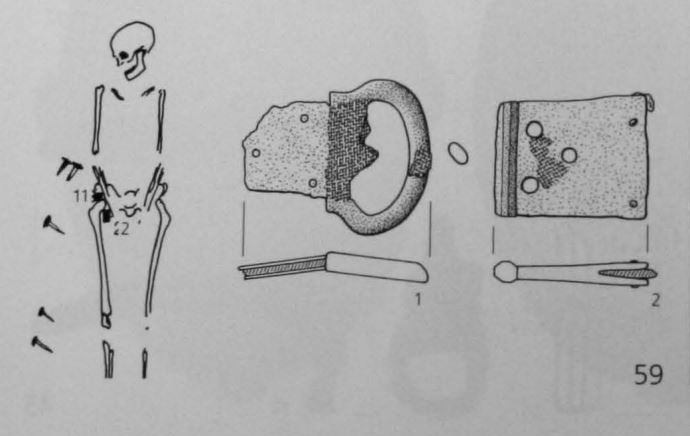 Simple belt with a short end (up to approx. 20 cm)

This form best resembles present belts, which are manufactured approximately 15 cm longer than the waistline. In seven graves from Birka, Sweden (488, 750, 761, 918, 949, 1030, 1076) the buckles are no more than 10 cm far from each other (Arbman 1943) and similar positions could be found throughout Europe – we can mention Great Moravian (i.e. Kalousek 1973: 33, Fig. 13) or Danish graves (Arents – Eisenschmidt 2010b: 301, Taf. 3). There are no belts with hanging strap-ends in Early medieval iconography, which is rather schematic than detailed. Belts are scarcely visible in painted iconography as they usually seem to be overlapped by pleated upper tunics, which can be interpreted as an element of fashion. As a result the belt looks like a narrow horizontal line.

On the other hand, several burial positions shows some of Early medieval belts had strap-ends that hung down, and the decoration of strap-ends is often understandable when seen in the hanging state. The most graphic evidence comes from depictions of people and animals which can be seen on the strap-ends and placed lengthwise. In some cases, there are figures of naked men depicted on the strap-ends, which could imply that the hanging end could reach down to the genitals and symbolically represent or emphasize them (Thomas 2000: Fig. 3.16, 3.27). In the listing below we will attempt to suggest several manners of tying these belts. 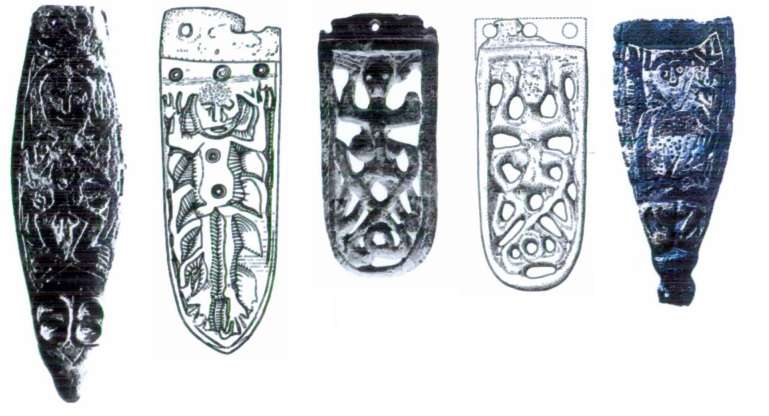 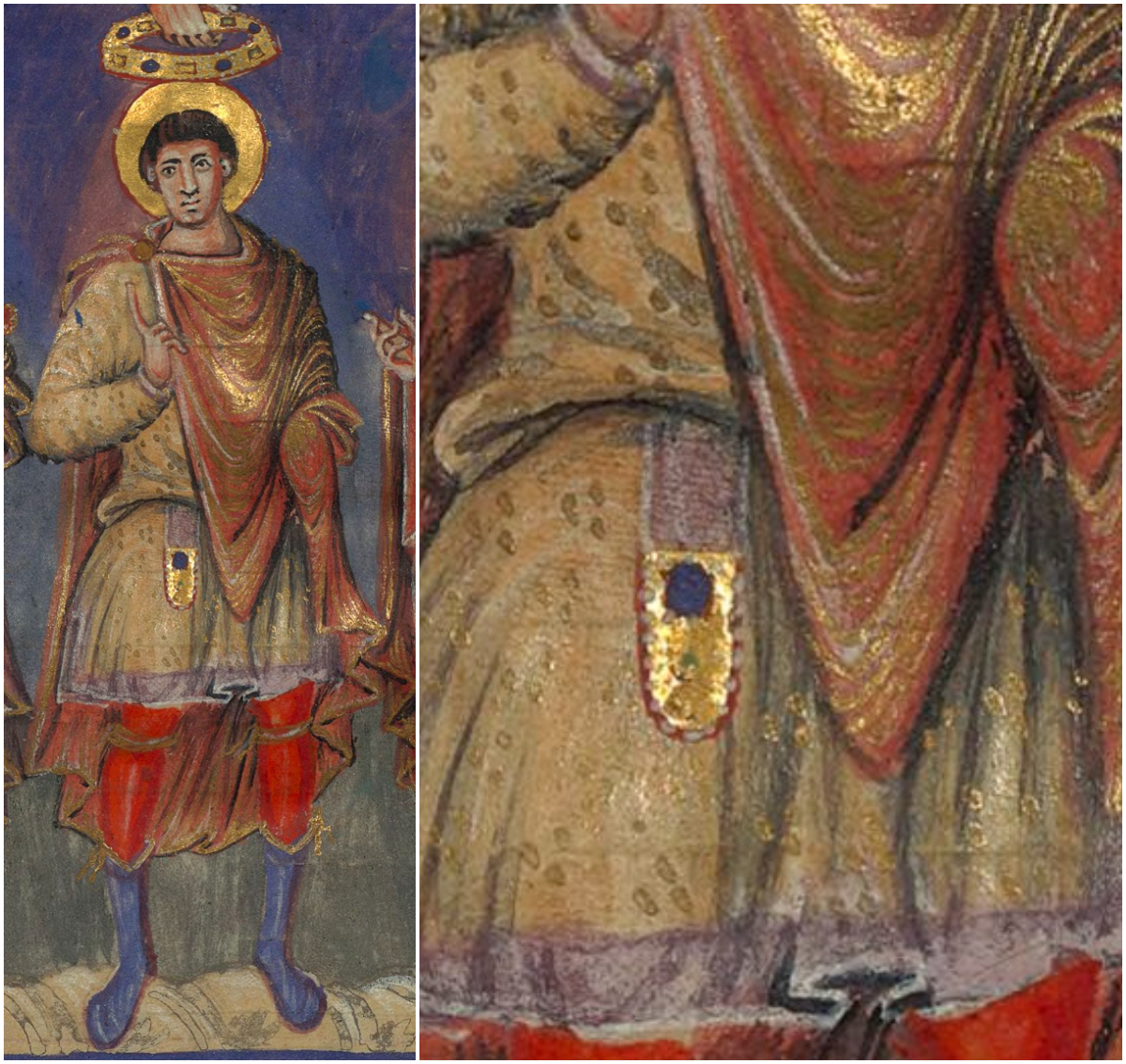 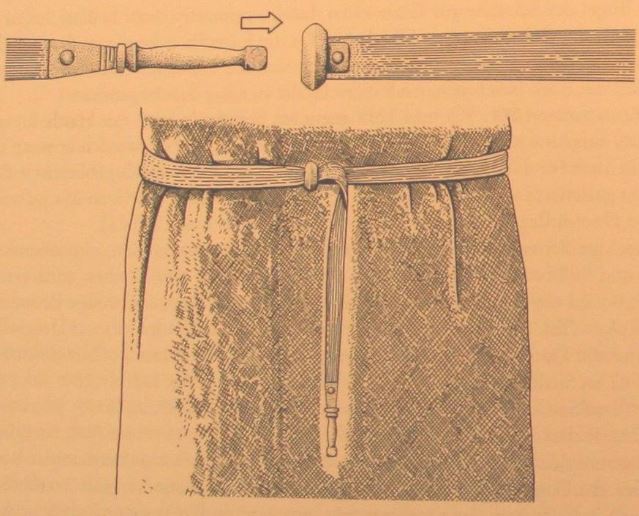 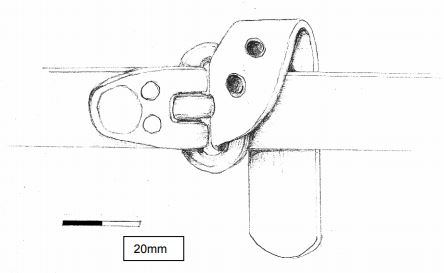 Fig. 7: Strap-end being flipped back after going through the buckle and tucked behind the already fastened belt. Shrublands Quarry, Watson 2006: Fig. 6.

Fig. 9: Attempt for a reconstruction of the belt from Birka grave no. 949 applying a leather slider.
Author: Sippe Guntursson. 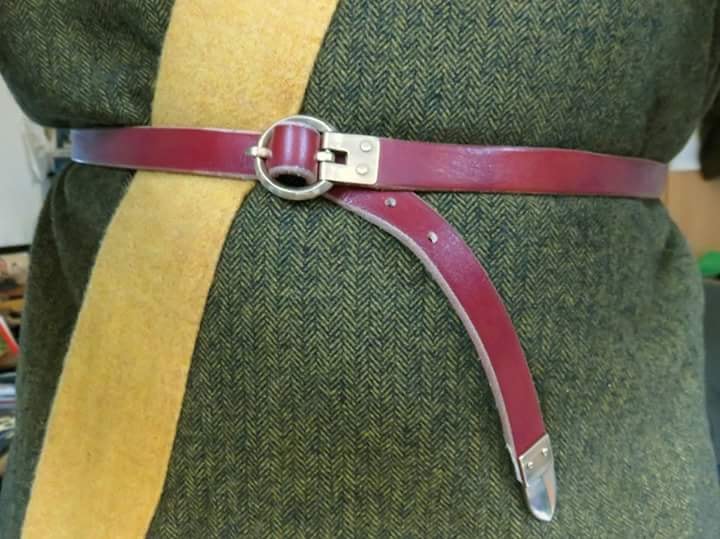 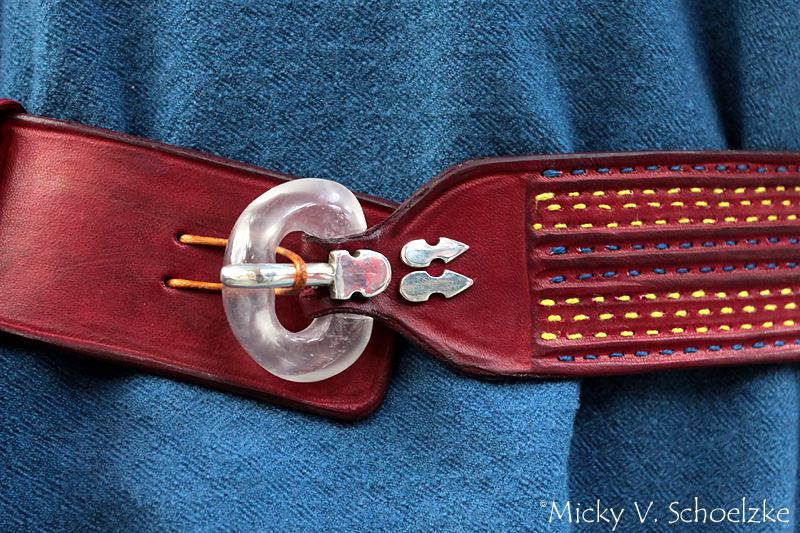 Fig. 11: Fixing the buckle with a thong attached to the belt. An unfounded hypothesis.
Author: L’Atelier de Micky. 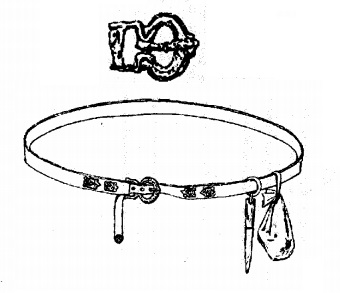 Fig. 13: Reconstruction of a Merovingian belt from St. Quentin.
France-Lanlord 1961.

Composite belt with a long end

Some of the Eastern-European Early medieval decorated belts are manufactured in a more complex way, having one or more longer ends. In case of a belt constructed to have more ends, one of these ends – usually the shorter one – is designed to be fixed by the buckle, while the others are either tagged on or formed by the outer layer of two-layered belt. Long ends of these costly belts are designed for double wrapping, tucking into a slider or behind the belt. The length of the ends is not standardized, however we are unable to find any belt that would reach below its owner’s crotch when completely tied. While looking for parallels, we can notice that a belt compounded this way has many similarities to tassels on horse harnesses. Apparently, the belts were worn by riders or emerged from such a tradition, then maintained the position of wealthy status even after being adopted by neighbouring non-nomadic cultures. At last we can state that longer belts were designed mainly to hold more decoration and to allow the owner to handle the length more flexibly, whether for practical or aesthetical reasons.

The topic of belt lenght in reenactment is definitely a controversional one as it touches every male reenactor. Belts are sometimes costly and even a hint, originally meant as constructive critic, can easily cause negative emotions. There is no need for them though, as there is probably no reenactor who has never worn a long belt. We suppose that this reenactorism, used in practice for more than 30 years over the whole world, is caused by these factors:

In this article, we demonstrated that historical belts often did not have any hanging ends and that the maximum length where the end would reach was the crotch, which could have a symbolic meaning. Any of the aforementioned manners of attaching should not be incompatible with the sources we have at our disposal, however as we already mentioned, both the length and style of wearing followed local traditions. Western Europe therefore preferred delicately hidden belts while in Eastern Europe, the richly decorated belts were worn on public display.

Thomas, Gabor (2000). A Survey of Late Anglo-Saxon and Viking-Age Strap-Ends from Britain, University of London.