In general, the base of the sword handle is a tang, which is covered with an organic (wooden, antler, straw / bast) or metal haft. As the following diagram shows, wooden handles in particular were often composites and were coated with leather, textiles, wire, sheet metal, cast terminals and rings:

When researching a different topic, I noticed the problem of usage of wire and sheet metal grips is overlooked, with almost no literature describing this marginal yet interesting phenomenon. I became especially interested in the connection between wire wrapping and Petersen’s typology. This short article should be a patch on the previous information gap.

As can be seen from the introduction, the wrapping has always covered the wooden handle, which in many cases has copied the thape of narrow tang, which has been designed for wrapping since the blade production phase. The resulting wrapped handles often gives a thin, subtle impression, and it is not uncommon for the widest part of the handle to measure just 2.5 cm, the narrowest 1.5 cm. The shape of the handle is usually trapezoidal or biconcave, exceptionally biconvex.

The collected material allows the following sorting of wrapping methods:

As we can see from the image selection above, the end of the wire is simply wrapped around the last turn. These places close to the guards are sometimes covered in decorative rings which take different forms:

Soft, non-ferrous metals usually became the material wound around the handles. Silver gained the general popularity, which corresponded not only to the laboriousness of the product, but also to the ostentatious impression of the overall weapon. The material used on the handle is usually also found on other components of the hilt, which on the one hand had to be practical during production, on the other hand a colour unification with high aesthetic quality was achieved.

As can be seen from the above, a number of finds indicate the popularity of contrasts, which were achieved by different windings (combining single-rod and double-rod wires), different diameters and also differently coloured materials. These elements have been used to achieve a more elegant and expensive look that is plastic, visually captivating and uses games of light and shadow.

In terms of material, wrapped handles can be divided into:

Wire wrapping seems to have a certain kind of connection to specific Petersen and Kazakevičius typologies, or it rather seems to be applied to specific groups of swords in a certain time span. It is typical that the wrapping does not apply to the magnificent types of the 9th-1st half of the 10th century, for example types H and E, in contrast to the magnificent groups of swords of the 2nd half of the 10th and 1st half of the 11th century like types S, T, V, Z. In the following list I will try to name all the groups that I was able to find:

Type K
One of the two potential swords, which could be dated to the 9th century and which has a wire-wrapped handle, is a find from the Rhine near Mainz (Geibig 1991: Cat. No. 111). The hilt fragment with a guard corresponds roughly to swords of type K, N or X, but it does not have a pommel, so dating to the 10th century cannot be ruled out. The guard is inlayed by classical vertical inlay, so that the fragment can be evaluated as a probable Geibig combination type 6 or Petersen type K (Geibig 1991: 103).

Type X
The only known sword with a wrap, which belongs to type X, is a sword originating from the grave IIIN-199 from III. courtyard of Prague Castle, which is traditionally dated to the 2nd half of the 9th – 1st half of the 10th century (Borkovský 1969: Obr. 56; Hošek – Košta – Žákovský 2019: 218; Profantová 2005). An unpublished work with the results of dating using the C14 method may push the find to the 9th century. 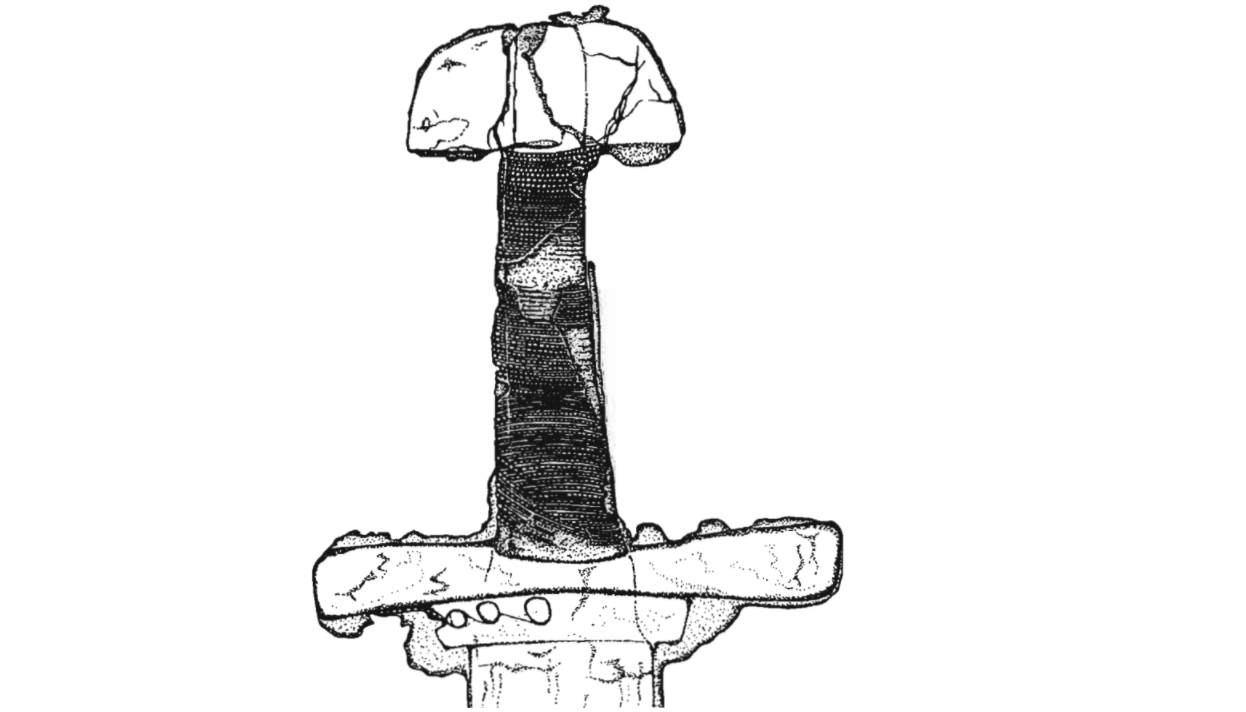 Type W
The W type sword from Breivold, Norway (T3107), dating to the first half of the 10th century, has a wooden handle covered with canvas and spirally wound with iron wire, which is not visible on the sword today (Vlasatý 2020). 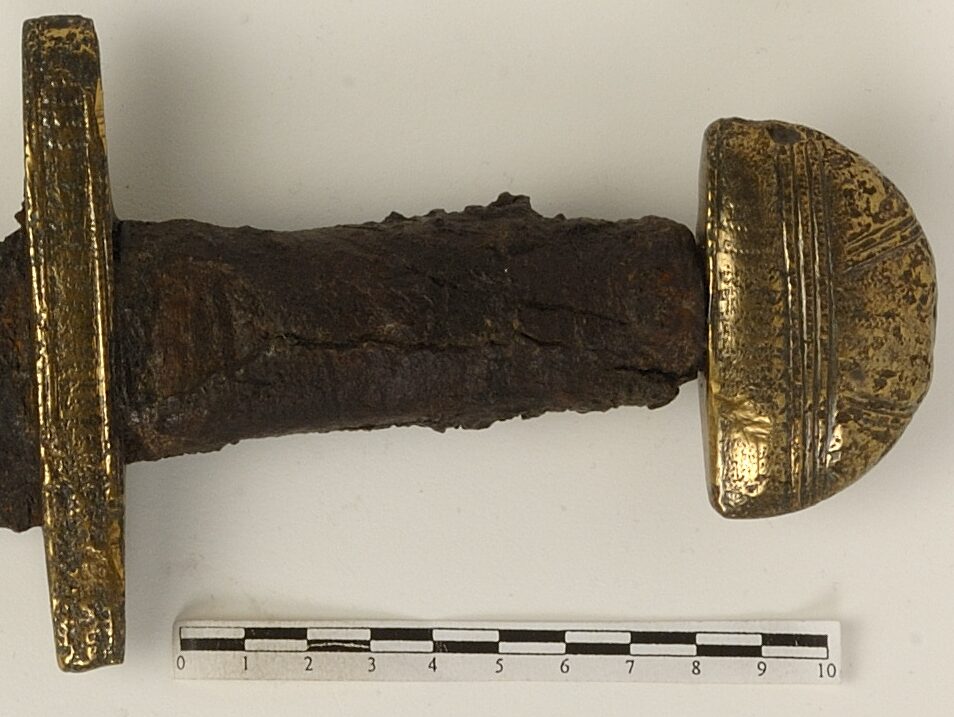 In the group of the oldest specimens (Brandstrup and Rosenlund), which are decorated with inlay similar to the R-type decoration, we find only rings of silver wire at the ends of the handles, not a continuous wrap. We do not find wrapping for R type swords, which are closely related to the S group. From this and also from the frequent animal ornaments associated with silver-wrapped swords, it can be concluded that type S swords with continuous wrapping developed in the same time as type T. 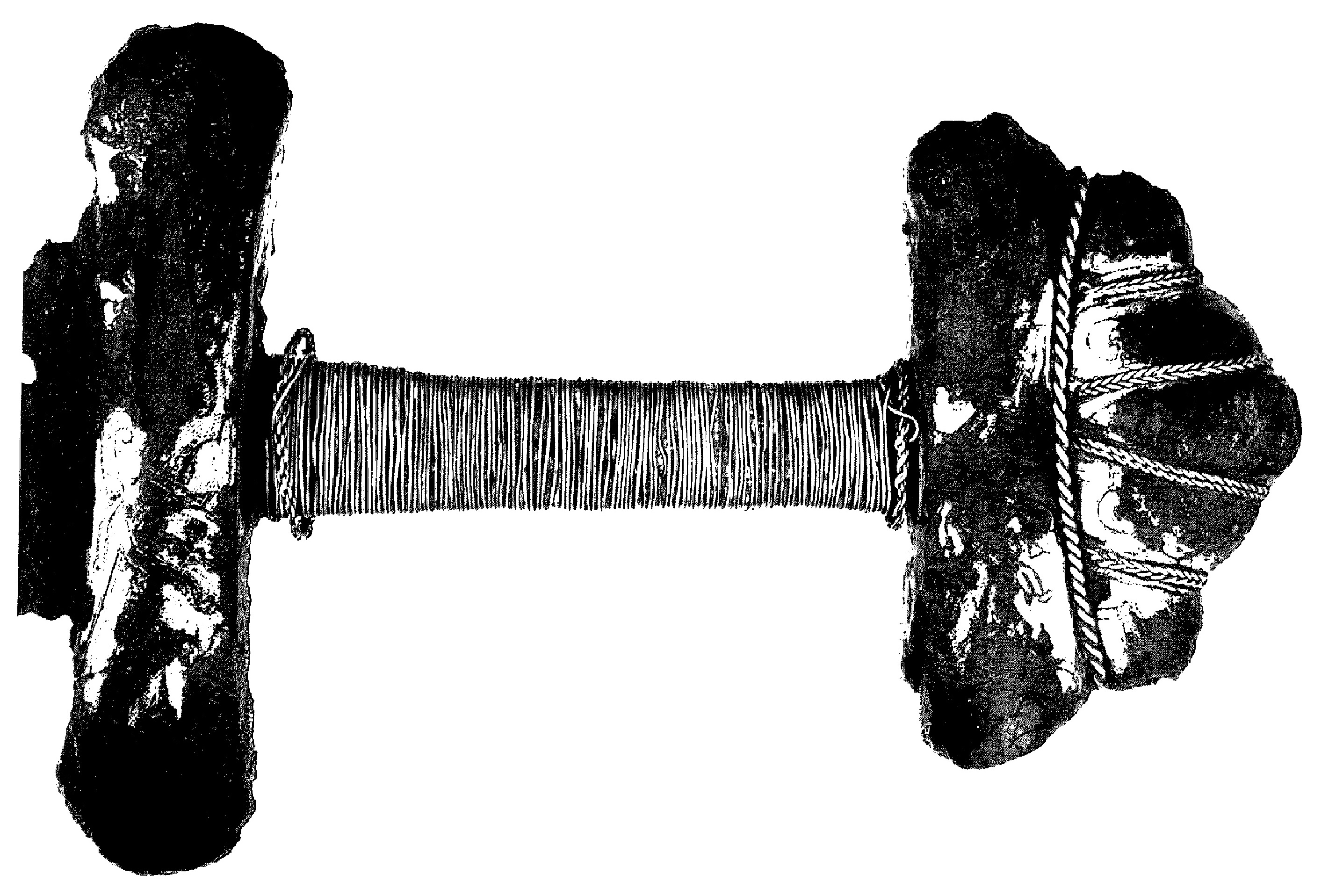 At least two Curonian-type swords that continuing in the tradition of type T, have handles decorated with wire or band. These are swords from Ēdole and Ranka Kapenieki (Tomsons 2019: 59. att, 61. att)., dated to 11th-13th century. 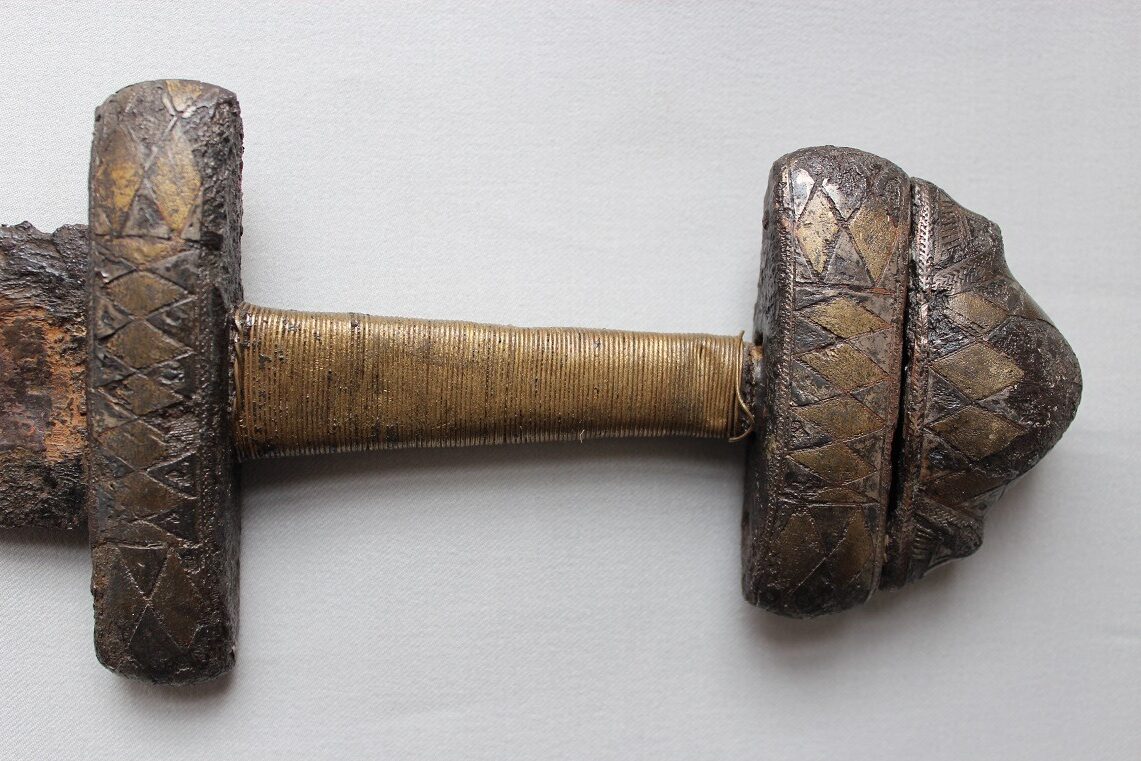 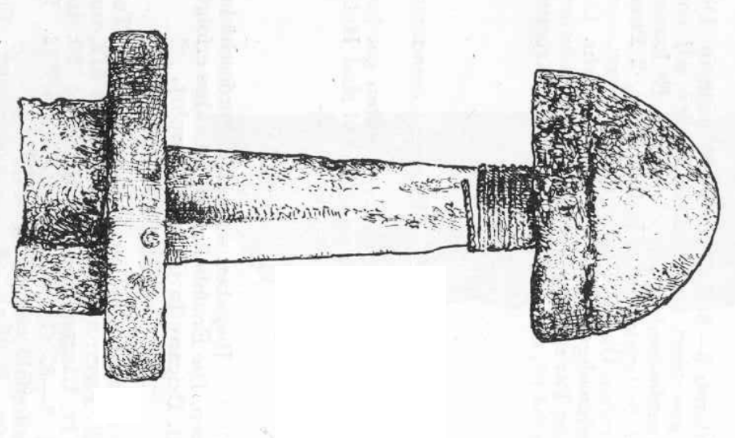 Sword from grave 36 from the Székesfehérvar-Rádiótelep locality (Bakay 1967: Abb. 9.3). 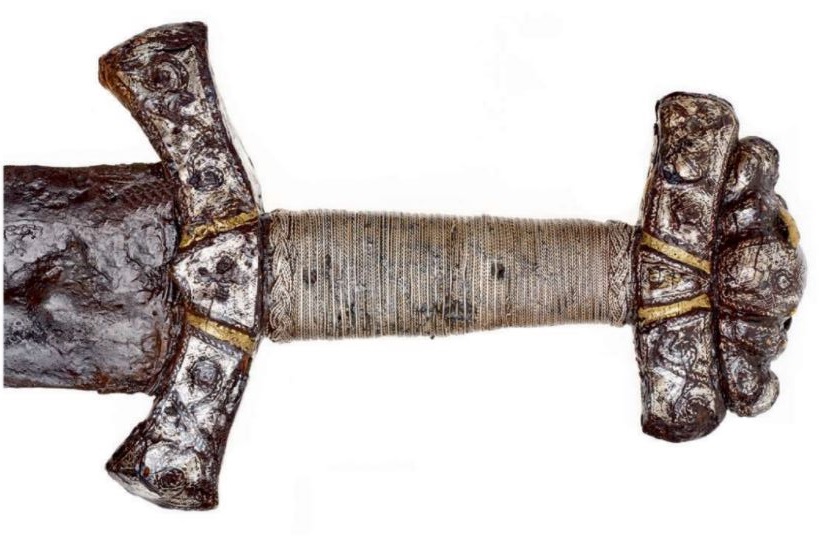 “L/Z2/Æ” variant
Three difficult-to-classify swords come from Norway, whose handles are wrapped in silver wire – Maarem Søndre (C28239), Sårheim (C21211), Langeid (C58882). While Petersen classifies these swords as types Z or Æ (Petersen 1919: 176), Androščuk’s classification shows that type Æ is artificially created and can be combined with variants of type Z, namely variant Z2 (Androshchuk 2014: 84-6) . According to Aksdal’s and Tomsons’ classifications, these swords can be classified as type L (Aksdal 2017; Tomsons 2019: 54-5). Wilson and Evison place these swords close to the so-called Wallingford group (Evison 1967; Wilson 1965). Although the typological order of these swords is still vague and will be gradually adjusted, especially with the increase of detector finds, there is no doubt that these are swords of the younger phase of the Viking Age, certainly dating back to the 11th century, as well as without discussion that it is interesting a group of lavish swords, often equipped with hilts with cast or overlaid components and handles decorated with metal (wire / cast metal). 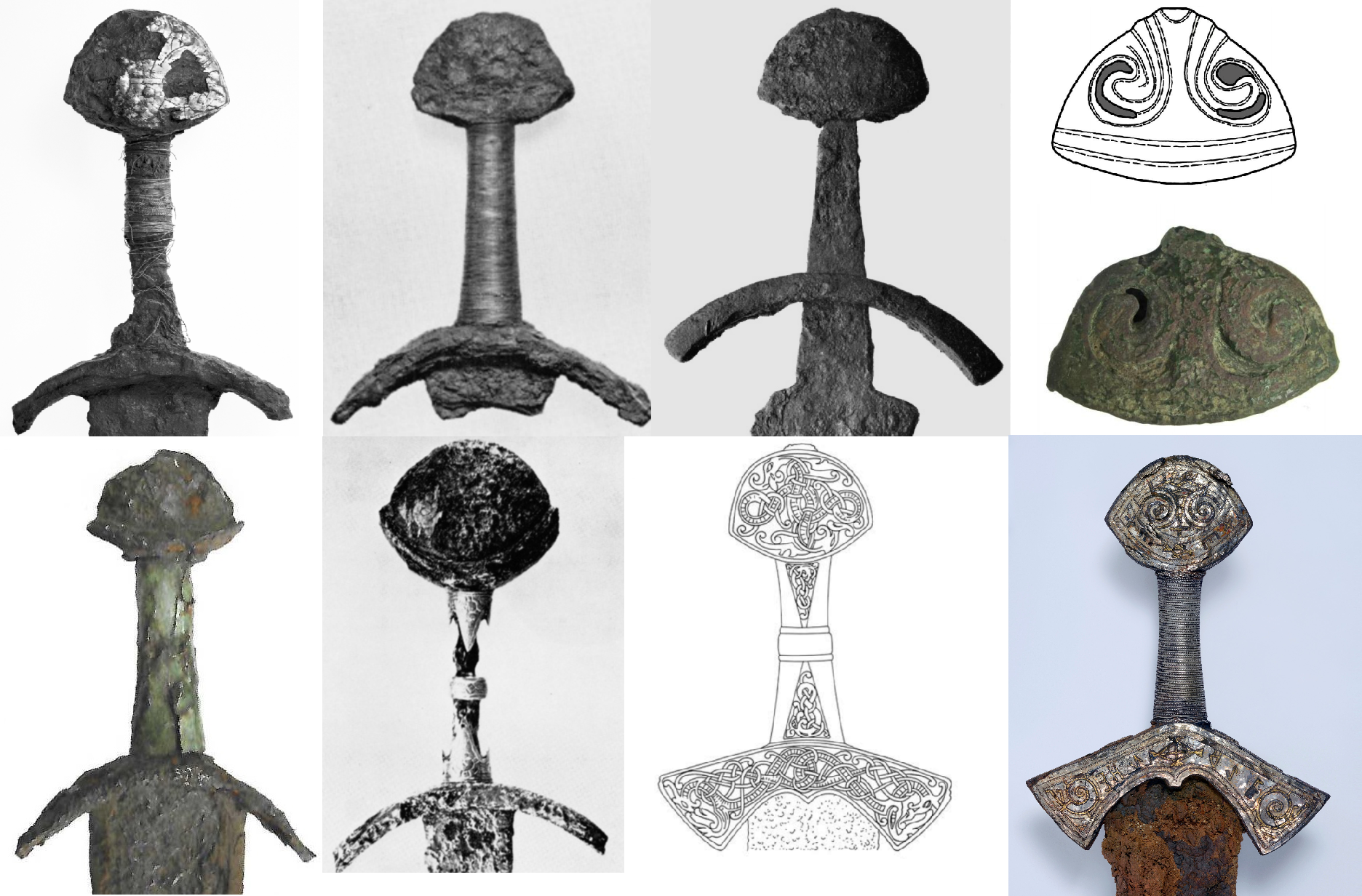 Dybäck-Vrångabäck group
A find close to the Z type and the previous group is the sword from the Dybäck locality (SHM 4515), which is evaluated as an Anglo-Scandinavian product dating to the year 1000 or to the late phase of the Viking Age (Androshchuk 2014: 92-3). The handle of this sword, whose hilt is completely cast in silver, decorated with niello and gilded, is wrapped in gold wire. 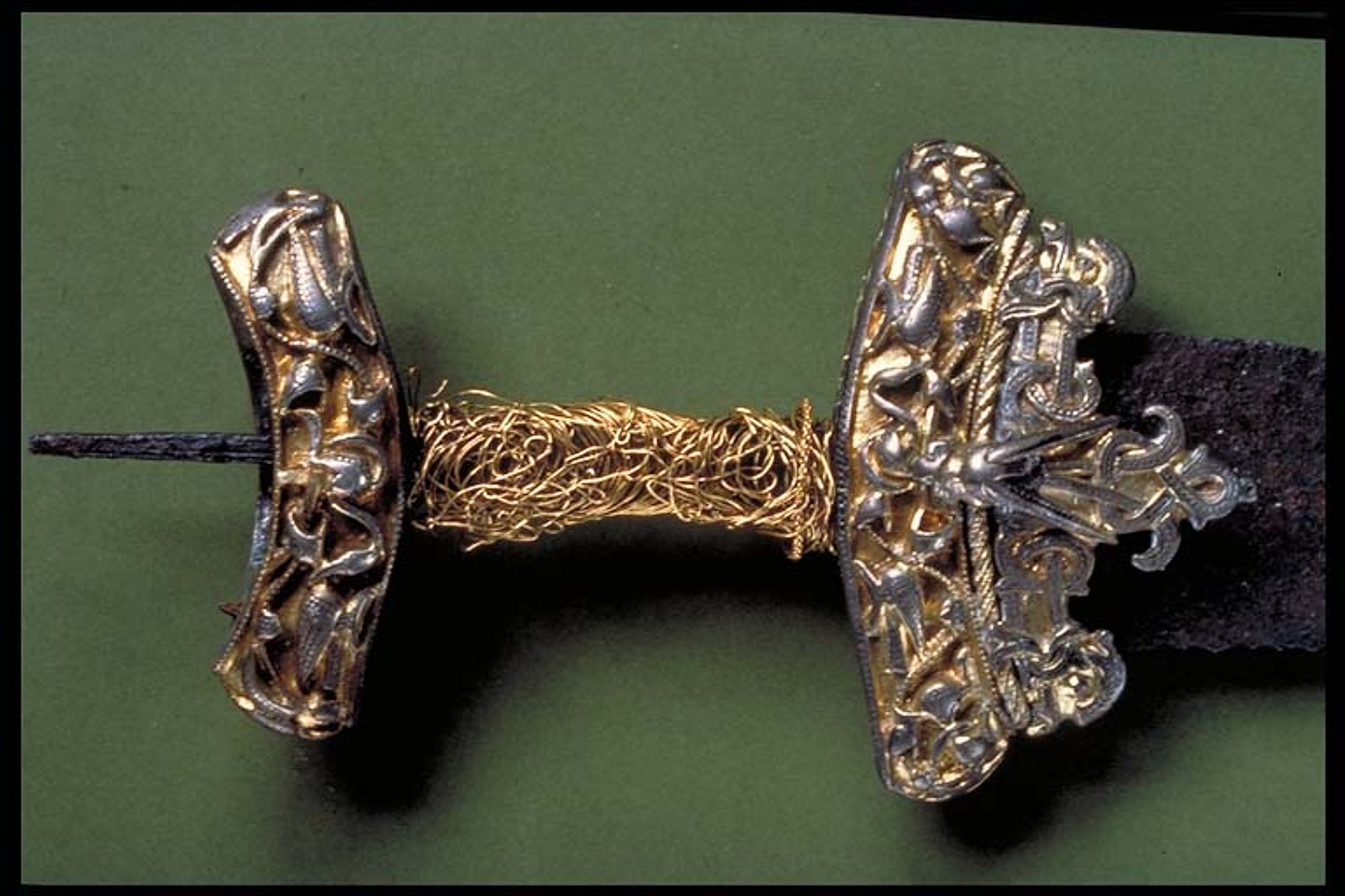 The grip of a handle made of silver or gold wire is not uncommon in Old Norse written sources, where it appears under two terms – vaf and oman (Baetke 2006: 468, 691; Falk 1914: 23-4). Swords with wrapped grips always appear in the context of an elite circle around the monarch and wealthy peasants, often being swords with names. Mentions of the gold wrap predominate, while the silver wrap appears less frequently.

The wrapping appears in family sagas, contemporary sagas, chivalric sagas, skaldic poetry and independent literary units. All these sources were recorded in the period of 12th-14th century and for some of them we assume an oral tradition dating back to the Viking Age. I give the greatest credit to the 19th stanza of the Song of Harald (Haraldskvæði / Hrafnsmál) of the poet Þórbjǫrn hornklofi, who promotes the generosity of Haraldr hárfagri by describing the equipment of his poets:

„One sees from their gear,      and from their gold rings,
that they are on friendly terms with the king:
they possess red cloaks,          painted shields,
swords wrapped with silver wires,     mail-shirts woven with rings,
gilded sword-straps                     and engraved helmets,
rings, which Haraldr chose for them.“

Although it is a strongly tendentious source, it shows that already around the year 900 there was a tradition of wrapping handles with wire. The Book about the retinue (Hirðskrá), a credible source for the material culture of the late 13th century, also mentions the wrapping of sword handles (Falk 1914: 23).

In this article, we have collected approximately 40 European swords dated to the period 9th-11th century, which have handles wrapped in wire or sheet metal. Such a low number may be due to poor conservation, deliberate destruction of weapons and cremation, but we cannot fail to notice that weapons wrapped in wire or sheet metal create a small portion, below 1% of the total number of swords in the period. However, if we focus on specific types, such as S, T, V and Z, we see noticeable accumulations, in the case of type S even over 10% when compared to all known pieces of this type.

The wire-wrapped handles appear to be a relatively laborious and lavish extension, typical of the most expensive swords of the 10th and early 11th centuries, for which it was desirable for each individual sword to be detailed. This is evidenced by the high proportion of quality blades with an inscription, extreme decoration with precious metals, the significant past of swords (eg St. Stephen’s sword) and also written sources. Of course, in an environment full of weapons, the handles were easy-to-read bearers of symbolism and important messages about the owner.

Although geographical preference is not the subject of research, it is not accurate that wrapping is a purely Baltic and Eastern European element, as Petersen suggested (Petersen 1919: 177). Material from Scandinavia, the Baltics and Russia reflects the shared fashion that has struck the Scandinavian, Central and Eastern European ruling courts of the emerging states (Košta 2020: 48). At this point, we can note that swords with grips are not typical of Western Europe, which has been less affected by this fashion (eg Schulze-Dörrlamm 2014: 623-8). It is not without interest that the wrapping of the handles occurs in the same regions in which we find the knife handles wrapped in wire.

Before 950, wrapped handles appeared rather sporadically. A very cursory look at the longer-term perspective, which must be confirmed by further research, may indicate that the wire wrap comes to the fore when the use of cast handle sleeves disappears. In other words, wire-wrapped handles can be an alternative and continuation of another flashy finish that is more typical of the older horizon. While the metal sleeves of the handles also appear later, the cast sleeves may have lost their relevance due to the use of wire and other all-metal variants during the 10th century.

As for the practical use of wrapped handles, the wrapping itself does not complicate the standard grip, but some thin handles, which have the width of an average male little finger, provoke debate about the form of actual handling of such objects, especially if the weight exceeds 1.5 kg. There are opinions that these are swords with a special function, such as combat swords suitable for stabbing (personal discussion with Roland Warzecha). Although the small dimensions of the handles may follow a reduction in the number of meters of wire needed to wrap, this does not fully explain other thin, cast handles. It seems certain that the contrast of massive components and thin handles is intentionally used. In trying to understand the most magnificent class of swords, it would generally be more accurate to use an art collector’s perspective than a warrior’s point of view.

Vike, Vegard (2017). The ornate sword from Langeid. In: UiO, Museum of Cultural History. Available at: https://www.khm.uio.no/english/research/collections/objects/the-ornate-sword-from-langeid.html