In the internet discussions, I was asked whether I happened to have any source that would describe the wood species used for swords grips in 9th-11th century. As I went through the archaeological materials, I was surprised to find that this detail is rarely mentioned and is missing in the monographs. Therefore, I decided to describe 20 analyzed grips from the period.

If we approach the the period swords in general, first of all we surprised by the low number of analyzed wooden grips compared to the huge number of several thousand swords that we have at our disposal.

Several factors contribute to this fact. Well-preserved handles that could be analyzed are generally rare and are usually associated with swords found in water or well-preserved graves. A large number of swords were discovered more than 50 years ago, when it was not the standard to publish swords in detail with analyzes, and over time, organic components often degraded so that they could not be examined at this time. A specific case is the Mikulčice swords – the organic parts of which burnt during a depository fire in the 2007. Some well-preserved handles, which are still covered with a metal, textile or leather wrapping, are not analyzed to prevent damage to the wrapping. The main reason, however, is the general lack of interest in the analysis of the organic parts of swords, which often persists to this day.

The absence of analyzes of used tree species in monographs (eg Androščuk 2014; Geibig 1991; Košta – Hošek 2014) means that no serious attempt has been made to summarize the issue so far. The catalog below is probably the most extensive work that can be continuously supplemented with new findings.

A sword belonging to Petersen’s type K, found at the bottom of Drava River. The handle, which is one of the best-preserved organic grips of the period, is made in one piece, is barrel-shaped, oval in cross-section and has been wrapped in a 2 cm wide linen ribbon.

The sword belonging to Petersen type X, which was found in grave no. 184 in Kanín in the Libice agglomeration, has a partially preserved wooden handle, which was wrapped in a thin strap made of leather or textile.

A sword with brazil nut pommel (MPP/A/31/33/84), belonging to type α var. 1 according to Nadolski and type X.A/B.1 according to Oakeshott, was discovered at the bottom of Lednica Lake. The grip was made of four parts attached to the sides of the tang, which were densely wrapped with a strip of leather. 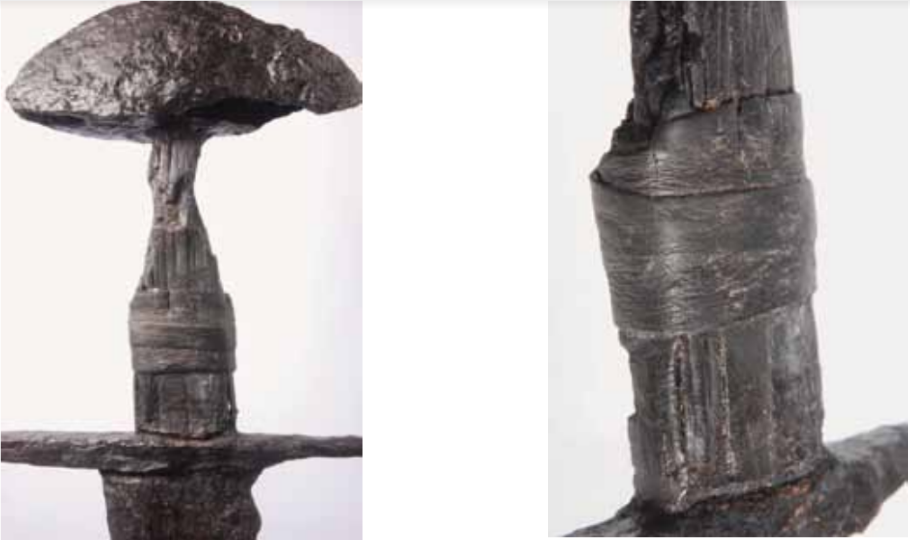 Petersen’s type H sword (MPP/A/74/3/94), found at the bottom of Lednica Lake, has a handle made of four parts attached to the sides of the tang. The parts fit together and show no signs of gripping, which may indicate the use of glue. 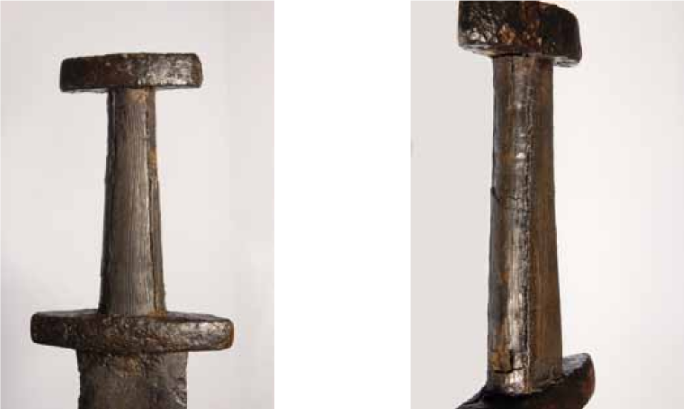 A Mannheim or H-type sword, found in connection with a former bridge, has a preserved piece of wood on one side of the tang that can be analyzed. The construction of the handle is not known, the wrapping is not visible. 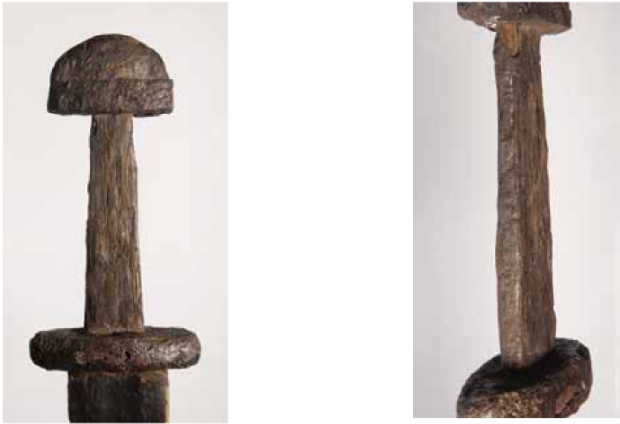 The type D sword found in the mound had a grip fitted with metal ferrules, thanks to which a piece of analyzable wood was preserved. 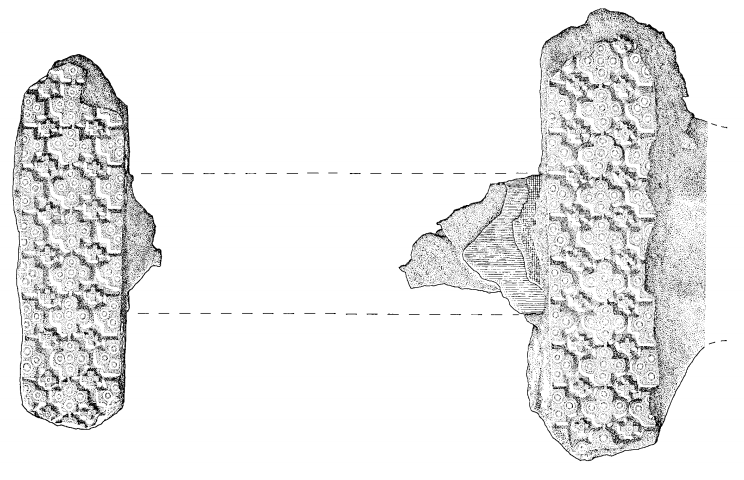 In his detailed study of swords from the port of Haithabu, Alfred Geibig states that for five swords it was possible to determine what kind of wood was used to make the grip. The grips are fragmentary and their construction, shape and cross-section cannot be determined.

The L-type sword found in the mound (T16054) has an exceptionally well-preserved handle with silver ferrules.

Material: from the look of the grip, it is clear that the wood used was Karelian birch.
Source: Unimus 2020a. 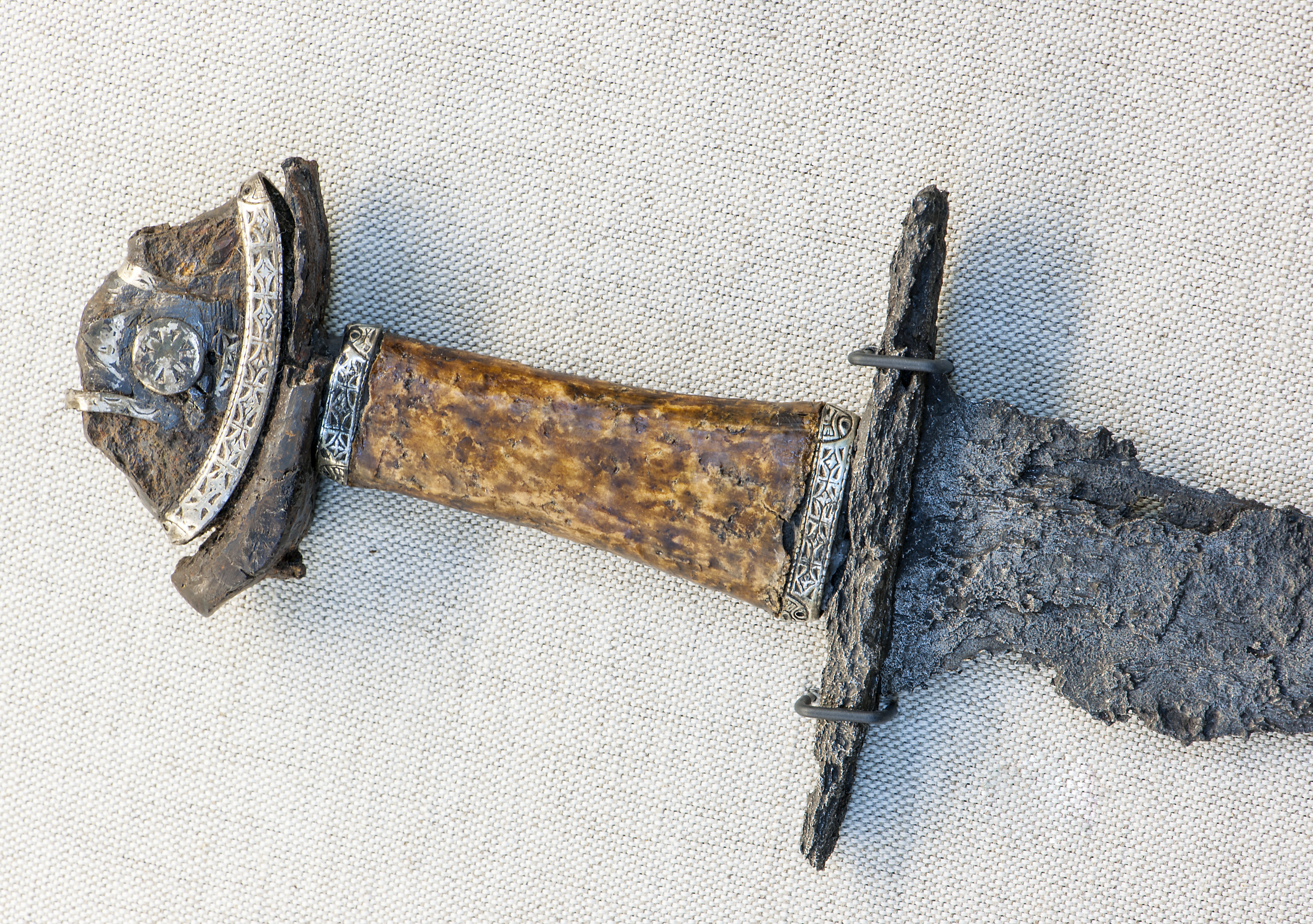 The sword from Hegge Østre. Unimus 2020a.

The L-type sword found in the mound (T8257) has an exceptionally well-preserved handle with silver ferrules.

Material: from the look of the grip, it is clear that the wood used was Karelian birch, similarly to the sword from Hegge Østre.
Source: Unimus 2020b. 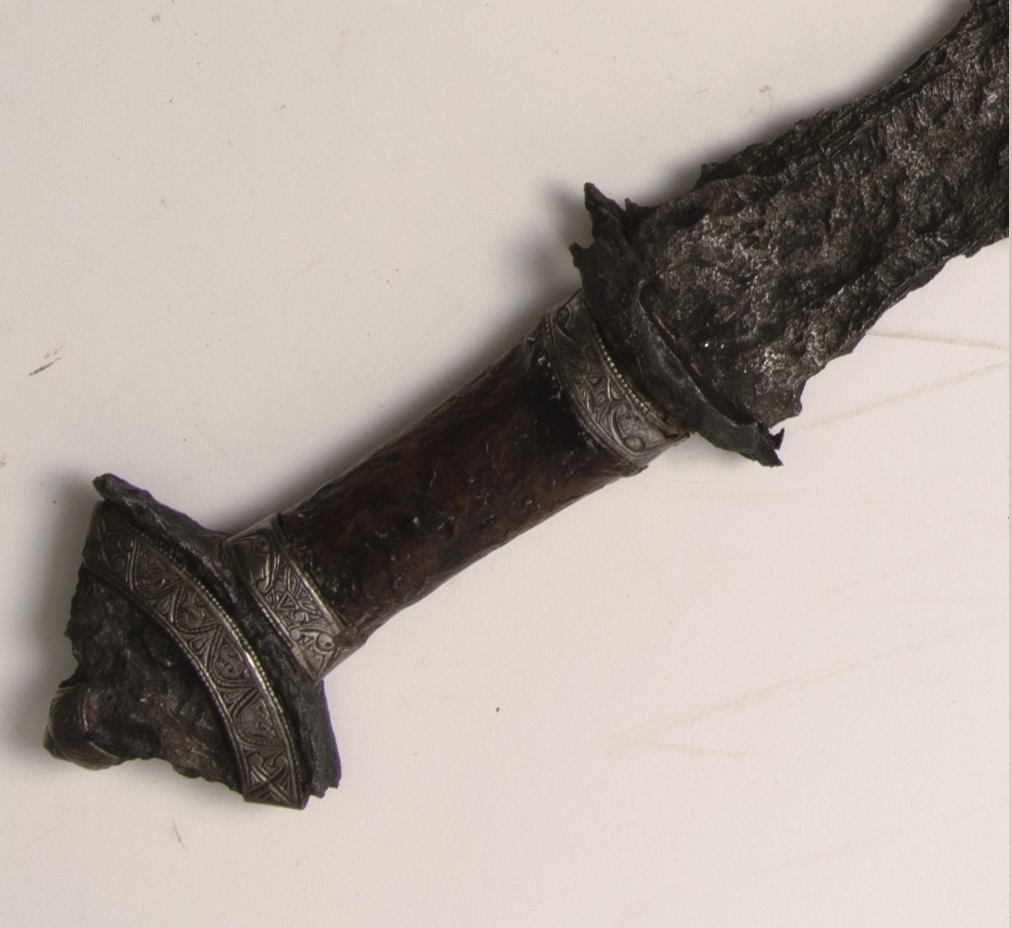 The M-type sword found in the tomb (C53315) has a well-preserved grip of oval cross-section that was most likely wrapped.

Material: linden. The same material was used to make the scabbard and axe shaft from the same grave.
Source: Gjerpe 2005: 40-1.

The L-type sword found in the tomb (C53660) has a well-preserved handle with metal ferrules.

Material: oak. The same material was used to make the scabbard, axe shaft, knife handle, chest, hammer and some other pieces of tools from the same grave.
Source: Gjerpe 2005: 62.

A sword of the indeterminate type found in the tomb (S12274) has a partially preserved handle of oval cross-section.

Material: most likely birch. The same material was probably used to make a knife handle from the same grave.
Source: Unimus 2020c. 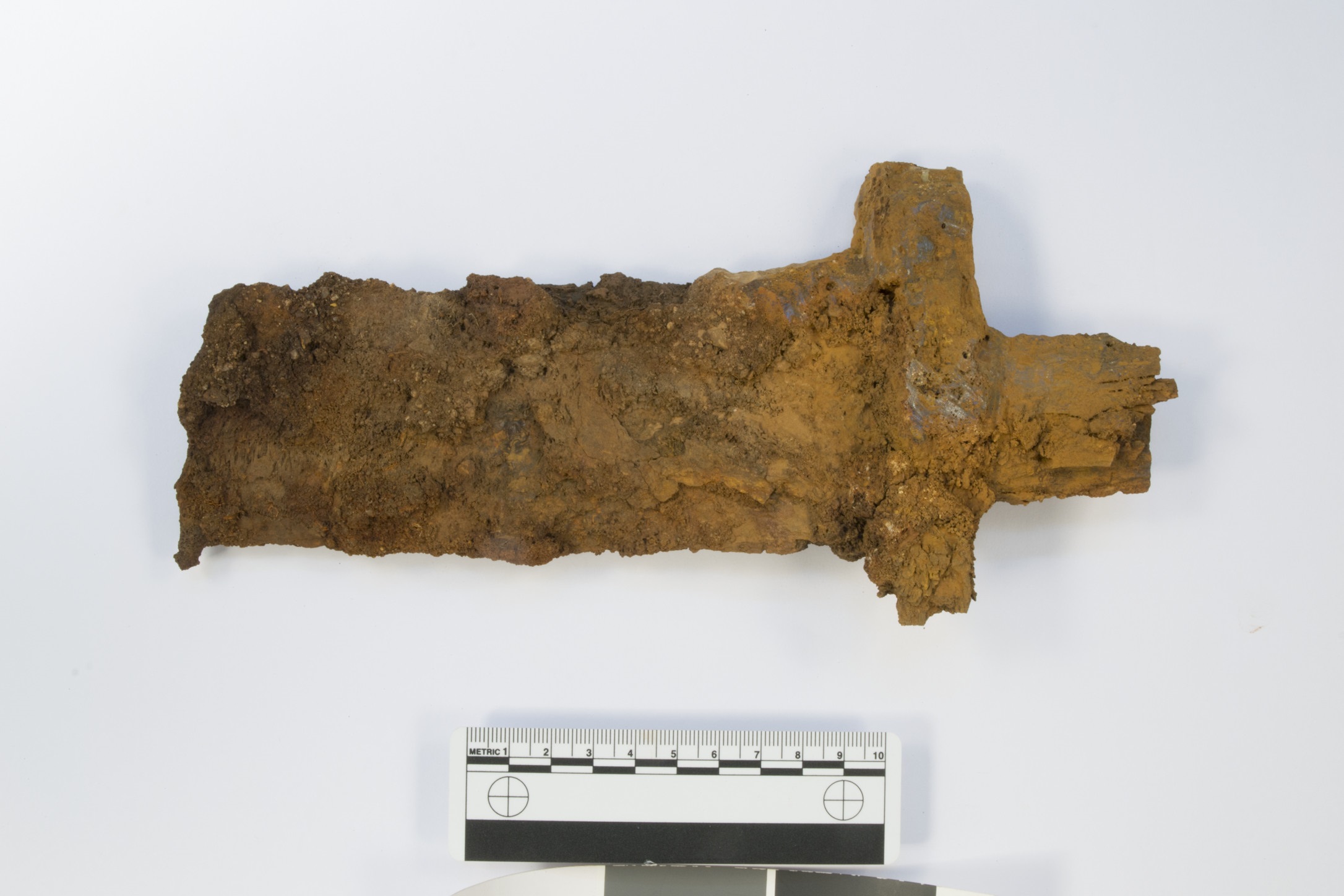 The H-type sword found in the grave (S5460) has a partially preserved handle.

The H-type sword accidentally found during plowing (T20736) has a partially preserved handle. 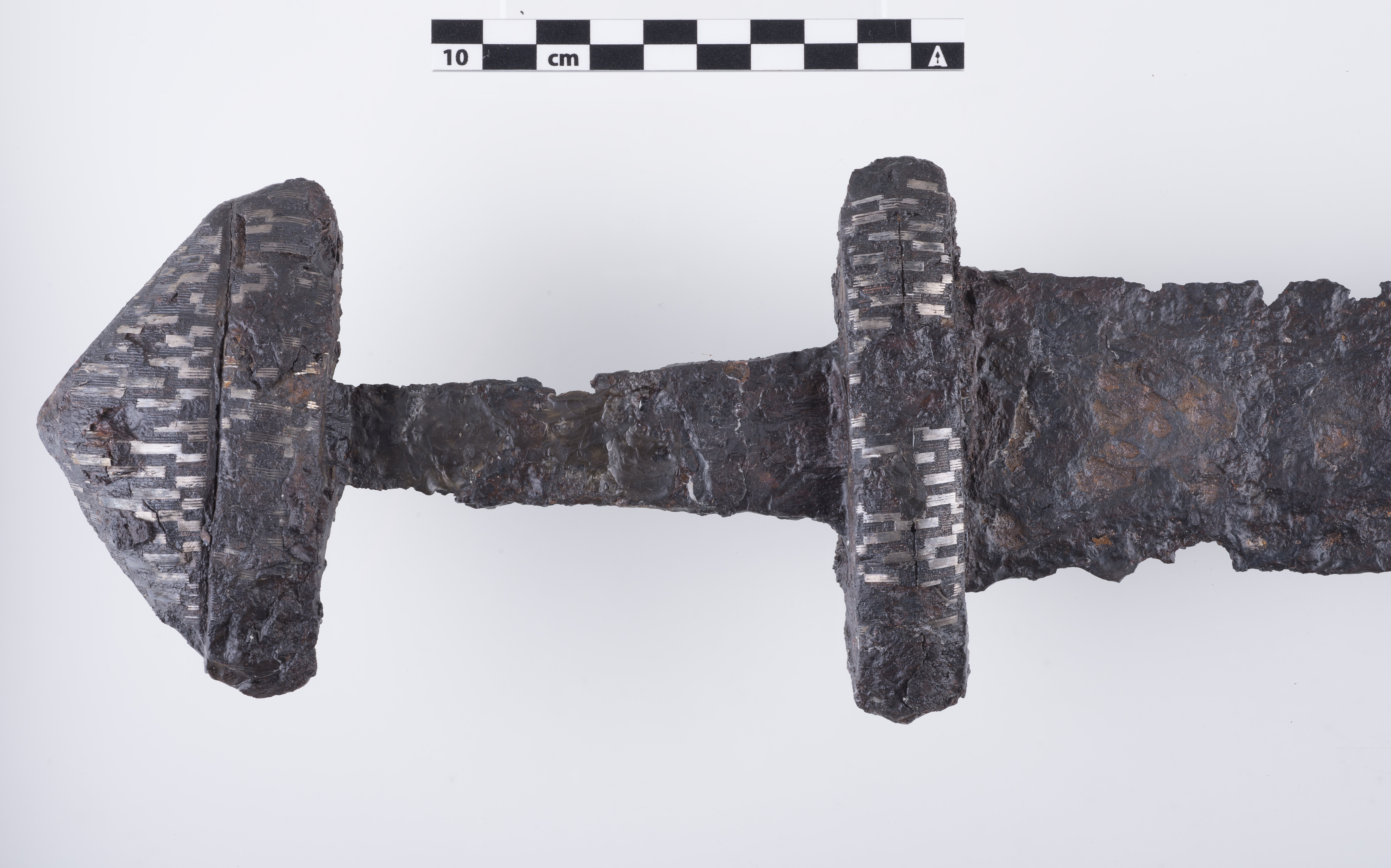 The M-type sword found in grave No. 511 has a partially preserved handle of oval cross-section that has been wrapped in a strip of fabric.

Petersen type H that was found in rider´s grave of Grimstrup has a very well preserved handle of oval cross-section that has been wrapped in a narrow strip of leather.

The wooden grips of the swords were made by different methods, in different shapes and also from different materials. The information contained in the catalog allows us to state that the grips were usually made from locally available wood species. However, we would like to point out four interesting facts.

The grips are more often made of deciduous trees. Maple, beech and oak are known for their strength and durability and were often used in the early Middle Ages to make handles and shafts. The choice of linden, willow or conifer shows a lack of these materials or other preferences in the design of the handle.

An interesting phenomenon is the use of two materials in the case of the H-type sword from Lednica, Poland. This solution probably has no practical or aesthetic meaning and could have a certain symbolism for the owner (Stępnik 2011: 79).

Although most of the wooden handles were covered with a textile or leather strap, two Norwegian L-type swords show that an aesthetically impressive material was deliberately chosen that was not wrapped in any way.

The last interesting point is the match or mismatch of the grip material with the scabbard material. In the case of Haithabu swords, the examined grips do not correspond to the scabbards, but in the case of the Gulli tombs, it is clear that almost all the wooden products contained in the tombs were made from the same materials. This fact may be conditioned by the unavailability of other tree species, but perhaps also by the practical handling of the material. The idea of production of all the tool and weapon handles at one time – whether before or after the death of a man buried in a grave – is very tempting.